Gender Stereotypes of Masculinity and Femininity

Throughout history and across culture, definitions of masculinity and femininity have varied dramatically, leading researchers to argue that gender, and specifically gender roles, are socially constructed (see Cheng, 1999). Cheng (1999:296) further states that “one should not assume that ‘masculine’ behaviour is performed only by men, and by all men, while ‘feminine’ behaviour is performed by women and by all women”. Such historical and cultural variations oppose the essentialist view that masculinity, femininity and gender roles are biologically ingrained in males and females prior to birth (Cheng, 1999).

Don't use plagiarized sources. Get your custom essay on
“ Gender Stereotypes of Masculinity and Femininity ”
Get custom paper
NEW! smart matching with writer

These socially constructed stereotypes surrounding masculinity and femininity coupled with their cultural and historical variations are the focus of this essay, leading into the sociological implications of the findings.

Whilst practices of gender roles have varied dramatically across history and culture, the stereotypes surrounding masculinity and femininity have remained fairly stoic (Cheng,1999). Masculinity has been continually characterised by traits such as “independence, confidence and assertiveness”, with these traits relating directly to aspects of dominance, authority, power and success (Leaper, 1995:1).

This indicates that the previously alluded to traits of masculinity are instead the Western traits of hegemonic masculinity (Connell, 1995).

Femininity, on the other hand, has often been categorised as the complete opposite of hegemonic masculinity (Leaper, 1995). Leaper (1995:1) has emphasised many stereotypically feminine characteristics, including “understanding, compassion[ate] and affection[ate].” These characteristics often perpetuate the gender role of the loving, nurturing mother and domestic home-maker, emphasising success (as opposed to the masculine success of wealth and status accumulation) as a tidy house and well-fed children (Hoffman, 2001). Various scholarly research has highlighted how such stereotypes of masculinity and femininity are continually perpetuated by the wider population, with Leaper (1995) reporting there is much distaste for a masculine woman or feminine man. However, regardless of the stereotypes associated with masculinity and femininity, cultural variations of these stereotypical gender roles exist.

It has long been argued that definitions and practices of masculinity and femininity vary across cultures (see Cheng, 1999), with evidence surrounding variations in masculinity being drawn from Japan, the Sambia region of Papua New Guinea, America and Latin America. Sugihara and Katsurada (1999:635) reiterate this perspective by stating that “[c]ulture defines gender roles [and] societal values”. Sugihara and Katsurada’s (1999:645) study of gender roles in Japanese society characterised Japanese hegemonic masculinity as “a man with internal strength” as opposed to the physical strength typically emphasised within Western societies’ ideal man. In contrast, the American notion of hegemonic masculinity is predominantly seen as to include heterosexism, gender difference and dominance (Kiesling, 2005).

Specifically, as stated by Kiesling (2005), masculinity in America relies upon being heterosexual, in a position of power, dominance or authority and believing that there is a categorical difference between men and women in terms of biology and behaviour. It is this Western notion of masculinity that is often seen to perpetuate stereotypical gender roles, as alluded to previously (Leaper, 1995). Further variations in masculinity across cultures can be seen in recent research in the Sambia region of Papua New Guinea, where it was discovered that masculinity “is the outcome of a regime of ritualised homosexuality leading into manhood” (Macionis and Plummer, 2005:307) Such engaging in homosexual acts, whilst considered an example of hegemonic masculinity in the Sambia region, is considered a subordinated masculinity in the Western world, indicating how hegemonic masculinity can vary across cultures (Connell, 1995).

Another cultural variation at the opposite end of the spectrum to the homosexuality of the Sambia region, the internalised strengths of Japanese men and even in contrast to the authoritative dominance of American masculinity, is the ‘machismo’ construct of masculinity in Latino men. The masculinity shown in Latino men can be described as an exaggerated form of American hegemonic masculinity, with a focus on physical strength, toughness and acting as both a protector and an authority figure (Saez et. al, 2009). These four variations alone – between Japanese, Sambian, American and Latin American masculinity – emphasise the cultural differences in masculinity. Femininity, however, shows to some extent, even greater variation cross-culturally.

Delph-Janiurck (2000:320) suggests that femininity focuses on “social relations… the home… [and] (re)creating feelings of togetherness”, re-emphasising the traditional stereotypical gender role of the nurturing, motherly home-maker. This definition of femininity can be reiterated by Sugihara and Katsurada’s (1999:636) study, where they found Japanese women portrayed aspects of Connell’s (1995) emphasised femininity, in that they were “reserved, subservient and obey[ed] their husbands.” However, these traditional traits of femininity are not the same across cultures. Margaret Mead’s study of the Mungdugumor and Tchambuli tribes of Papua New Guinea stand in stark contrast to the femininity previously emphasised. The Mungdugumor tribe showed both males and females as aggressive and powerful, typically masculine traits to the Western world (Lutkehaus, 1993).

The Tchambuli tribe, in contrast, reversed the Western gender roles completely, resulting in the males being more submissive and females acting more aggressive (Gewertz, 1984). In the Western world and specifically Australia, variations in comparison to other cultures could not be more obvious. Harrison (1997) emphasises how the English tradition of debutante balls, adapted by many religious institutions in Australia, promotes a feminine ideal of monogamous heterosexuality, coupled with passivity, beauty, modesty and virginity. This version of femininity stands in stark contrast to the subservience of Japanese women, and the aggressive traits of both the Tchambuli and Mungdugumor tribes’ women, as a cross-cultural example of varied femininity. These examples further serve to emphasise how variable masculinity and femininity are across cultures. However, such variations are similarly evident across historical periods.

Historical variations in masculinity and femininity also exist, further serving to emphasise that gender roles are a socially constructed creation. Cheng (1999:298) reiterates this stating that, “[a]s history changes, so does the definition of hegemonic masculinity”, emphasising how variable social constructions of gender roles are. In the last century alone, the American version of hegemonic masculinity has witnessed significant changes. Before the first World War, hegemonic masculinity was portrayed through the likes of Humphrey Bogart and Clark Gable, before being overturned by the “more physical, muscular, violent and sexual” Arnold Schwarzenegger and Sylvester Stallone (Cheng, 1999:300).

Another example exists in Australia, where masculinity has seen a similar shift from the 1950s until now. Pennell (2001:7) has emphasised how masculinity in Australia started with the patriarchy, the belief that “moral and legal authority derives from the masculine.” The 1950s particularly portrayed masculine males as the breadwinners and feminine females as homemakers, examples of the gender role stereotypes continually perpetuated today (Pennell, 2001). As the years progressed, sports stars such as Donald Bradman and, more recently, Shane Warne and Olympian James Mangussen, began to portray typical hegemonic masculinity, with more emphasis being placed upon physique, dominance and power, than simply material wealth (Pennell, 2001). However, masculinity is not the only thing that has seen significant historical change.

Femininity, however, has not changed as dramatically as masculinity, remaining, as emphasised by Cheng (1999), the subordinated gender. Matthews (in Baldock, 1985) emphasises the changes that have occurred in femininity over the twentieth century, from women portraying their femininity through submissive acts of unpaid work to women’s emancipation and allowance in joining the workforce, emphasising a less submissive, more powerful and independent notion of femininity. Whilst the feminist movement showed significant improvements to women’s rights, historical notions of femininity – passivity, domesticity and beauty – continue to be perpetuated in Australian society (Cheng, 1999). This emphasises how society may not change as fast as evidence surrounding the social construction of gender roles arises (Cheng, 1999).

Various sociological implications arise from these examples of varying masculinities and femininities across culture and history, particularly that it suggests gender roles are “not homogenous, unchanging, fixed or undifferentiated” (Cheng, 1999:301). To some extent, such evidence can dispute claims that gender roles, masculinities and femininities are biologically determined and can argue against the essentialist argument that there are two and “only two bi-polar gender roles” (Cheng, 1999:296). The evidence, that masculinity and femininity vary cross-culturally and over historical periods has the ability to argue against the essentialist argument, as it shows the more than two gender roles exist, with variations between cultures (such as the varied femininities across Japan and PNG) and within historical periods (such as the variations in American hegemonic masculinity).

In a societal sense, evidence suggesting that gender roles are not biologically constructed, but instead vary throughout culture and history, emphasises that such perceived inevitable functions of society, such as the patriarchal dividend and gender inequality are not inevitable biological constructs (Hoffman, 2001). They could be argued, instead, as socially constructed blockades to female empowerment and equality, that, such as can be seen in the Tchambuli tribe of Mead’s study, can be reversed (Lutkehaus, 1993).

The evidence that masculinities and femininities vary diversely across culture and historical period further empahsises that gender roles and gender divides are socially constructed. With evidence drawn from as far reaching as PNG and Japan and over vast historical periods, it can be reiterated that gender roles and perceptions of masculinity and femininity are not unchanging (Cheng, 1999). As emphasised throughout this essay, such evidence disputes essentialist arguments regarding the supposed inevitable patriarchal dividend and, in relation to society, reiterates that gender roles can change.

Gender Stereotypes of Masculinity and Femininity. (2016, May 01). Retrieved from https://studymoose.com/gender-stereotypes-of-masculinity-and-femininity-essay 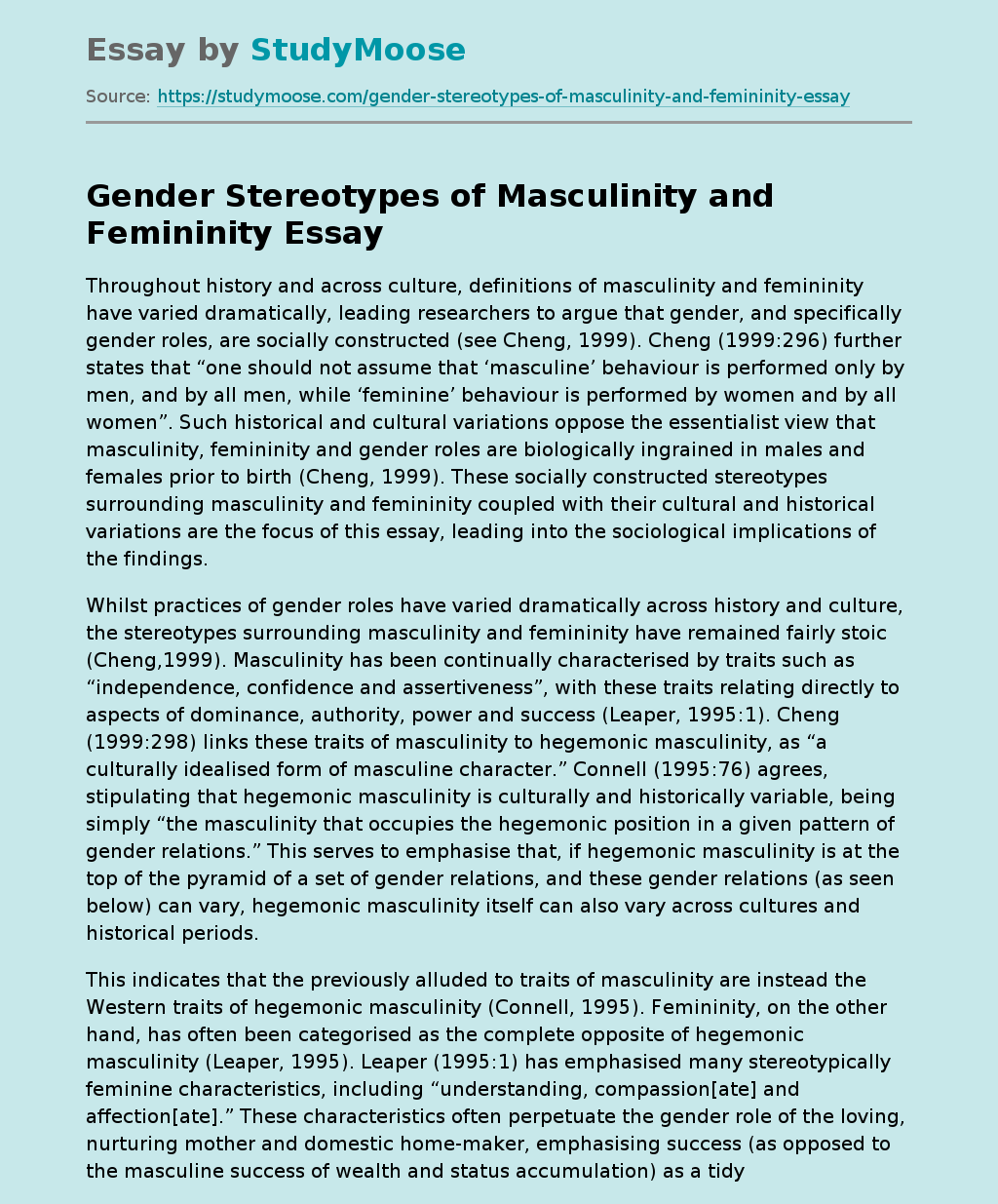