Gender Roles of a Perfect Society: the Oneida Community

Utopian communities are societies that strive for perfection in different aspects. Some wanted to reform a certain issue, such as slavery and others wanted to achieve perfection in all aspects. These societies usually had few laws because they tried to diminish all evils from them. Oneida was one of the communities that thought their society was best for human kind. They saw men and women as equals and everyone was married to each other. The utopian community of Oneida had a system that saw women and men as equals but oppressed both.

Don't use plagiarized sources. Get your custom essay on
“ Gender Roles of a Perfect Society: the Oneida Community ”
Get custom paper
NEW! smart matching with writer

Oneida was founded in New York by John Humphrey Noyes in 1848. Oneida was mostly involved in the growing of fruits and vegetables, the production of silk thread, and the manufacturing of animal traps. Oneida’s people believed that they were free from sin because Jesus had already returned. Noyes believed that sex was very spiritual. Oneida believed in “complex marriage” – the practice of keeping sexual encounters in constant circulation throughout the week.

Men and women would be matched based on their spiritual and moral qualities. Gender roles were less explicit at the Oneida community because women were seen as equals. Even though it sometimes bent to the American ideologies that were present during the nineteenth century, Oneida was generally more feminist than the rest of the dominant America. Women were always seen as equals to men, unlike the traditional American ideas of the nineteenth century.

The common ideologies about women were defied in the society.

In the Circular, it states that, “[Noyes] evolved a theory that women were ‘the legitimate critics of men in social life. ’ In the ‘slave-holding position of marriage’ men refused to look on women as equals, but in the dispensation of the Community, women were set free to express their own tastes and feelings and their criticism was the proper looking-glass for a man” (Circular 295). Instead of the usual instance where women sat quietly without speaking their opinion, Oneida allowed them to have a voice. In dominant societies, women were the property of men.

Men could do anything to their wives without shame or punishment. When Ellis spoke about Oneida’s equality, he said that, “The women are the common property of men, and vice versa” (Document 8). At Oneida, everyone was married to everyone else. No one had a particular partner and they were treated as brothers and sisters. In the dominant society, women were only given domestic jobs at home. Welter discusses that, “The true woman’s place was unquestionably by her own fireside – as daughter, sister, but most of all as wife and mother” (157).

At Oneida, women could perform any job. A writer from the Circular says, “I see here, women employed as bookkeepers, business correspondents, packers and shippers, and managers of large manufacturing establishments” (301). The women could perform what the dominant community perceived as “manly. ” These jobs proved that women were not as “fragile” as the dominant society saw them. Women and men were not forced to be involved in a monogamous relationship. John Humphrey Noyes compared monogamous relationships to prisons because of their lack of freedom.

In the dominant society, “The marriage night was the single great event of a woman’s life, when she bestowed her greatest treasure upon her husband, and from that time on was completely dependent upon him, an empty vessel, without legal or emotional existence of her own” (Welton 152). Since the dominant society believed that women were so fragile and needy, marriages were the only reasonable option for women and men. The neediness of the woman called for the man to control the relationship. Welter says, “Submission was perhaps the most feminine virtue expected of women” (154).

Women would blindly obey their husbands without argument. On the account of marriage, Mr. Free Church says, “The Truth is, Marriage gives man the power of ownership over woman, and such power is wrong and prolific of wrong in the case of Marriage, as in of Slavery” (Document 3) Oneida believed that a monogamous relationship enslaved women. To be truly free, women had to participate in interviews. Women were not seen as adulterous when they participate in their weekly “interviews. ” Because of the “interviews,” women had more sexual freedom. In a dominant society, women who were not chaste were not true women.

Welter says, “Purity was as essential as piety to a young woman, its absence as unnatural and unfeminine. ” (152) Contradictory to the dominant society, Oneida believed that the only way to be happy and free was to circulated between different men in the community. In the dominant society, the man was in charge. In regards to the ideas of Oneida, Ellis says, “Persons shall not be obliged to receive, under any circumstances, the attentions of those whom they do not like” (Document 8). Women in traditional societies could not argue or object to a man’s wishes but women at Oneida could.

If they did not want to participate in an interview with someone they did not like, they were not forced to. Even though there was more sexual freedom at Oneida, there were certain rules that the society had to follow regarding sexuality. Monogamous relationships were forbidden so if a couple was becoming too close, then the society would let them know and they would try to prevent it. Noyes Robertson explained that, “No couples were to show ‘exclusive love’ for one another; and if a man and woman began to have a disproportionate number of sexual encounters” (139).

The interviews were supposed to keep in constant circulation to prevent “exclusive love”. According to Noyes Robertson, “Males were encouraged to avoid ejaculation during intercourse with their partners, as a sign of self-control and spiritual maturity. This practice was based on the idea that ‘wasting’ a man’s semen was bad, and that difficult pregnancies for women should be avoided” (15). In the dominant society, women were the ones who were in charge of the birth control but Oneida made the men in charge of it.

This altering of gender roles took the stress of birth control off women and made the men responsible. The community of Oneida believed that the man’s “control” showed great spiritual maturity. In the Oneida community, women were not forced to dress or look a certain way. Instead of wearing formal dresses everywhere, “They cut off their skirts to knee length and used the discarded material to fashion straight ankle-length pantalets. Not beautiful, not always becoming, but always both comfortable and practical.

Under the same inspiration, they cut their hair short” (Noyes Robertson 294) Women stopped dressing to the men’s approval and satisfaction. They started wearing what was most practical and most comfortable. According to the First Annual Report of the Oneida Association, “The women say they are far more free and comfortable in this dress than in long gowns; the men think that it improves their looks; and some insist that it is entirely more modest than the common dress” (Noyes Robertson 297) The men Oneida appreciated the women no matter how comfortable or unfeminine they looked.

Oneida women were not forced into having children. The default life of a woman from a dominant society included getting married and having children. Not having children was not an option. On the contrary, the women from Oneida could choose to have children or not. They were not expected to take on the responsibility if they did not want to. According to the Circular, “Childbearing, when it is undertaken, should be a voluntary affair, one in which the choice of the mother, and the sympathy of all good influences should concur” (17). In a dominant society, women were practically forced to have children.

If they did not or could not, they brought shame to their husbands and families. The women at Oneida were not pressured about infertility because having children was completely optional. If the Oneida women decided to have children, they were not expected to be involved with child care. The Oneida children were raised together, apart from their parents. Noyes Robertson says that, “The children between two and twelve years of age were housed” (311). This system allowed women to have children but did not force them to raise the child by themselves.

The parents could visit the child but they would be criticized if they became too close. With regards to “exclusive love,” Corinna Ackley Noyes says, “I gave her up at last, with the others, heartily, feeling that she would have every want supplied and that I should be a better and happier woman for doing so. I now realize, as I did not before, that the old way of each mother’s caring exclusiveness for her own child begets selfishness and idolatry and in many ways tends to degrade women. The new system works well in every respect” (Document 15).

Giving her child up to the community satisfied Corinna Noyes Ackley. She did not have to stress about the vast responsibility of raising a child alone. She believed that she did the right thing when she sent her child to be raised by the Oneida community. In contrast to the conventional society, Oneida’s women were given more opportunities because they were seen as equals to men. Women had a chance to have a non-domestic job, a choice to have children or not, and more sexual freedom. The perfect community’s demise was in the year 1881. It’s example of equality still lives today.

Gender Roles of a Perfect Society: the Oneida Community. (2020, Jun 02). Retrieved from https://studymoose.com/gender-roles-perfect-society-oneida-community-new-essay 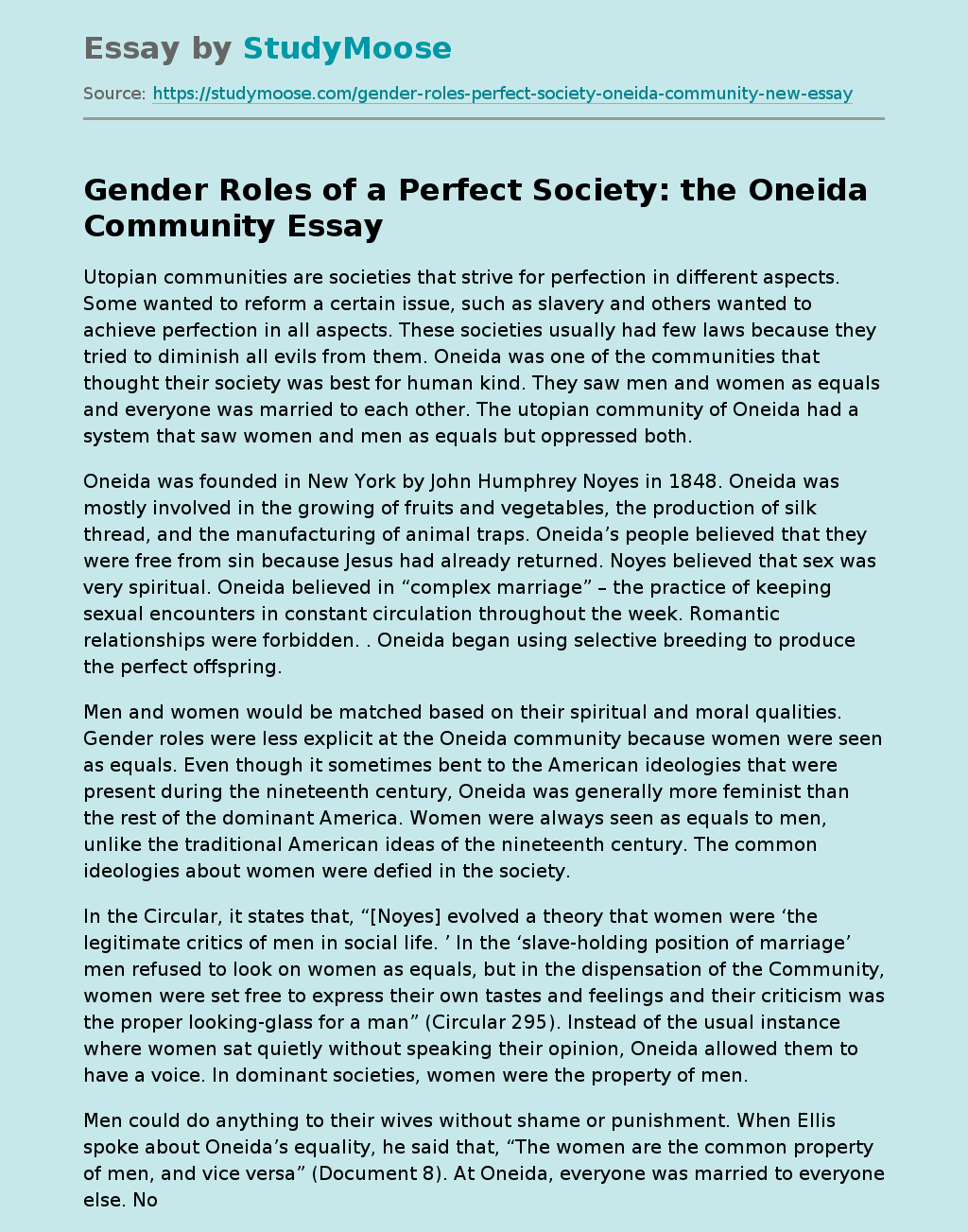