“Gender is the crucial factor in characterization in the majority of sitcoms. Up until the impact of feminism in the 1970s, in the UK at least, it is clear that most of the successful sitcoms featured leading male characters (Hancock, Steptoe, Dad’s Army, Till Death Do Us Part, Porridge etc.). Women were more likely to feature in ‘ensemble casts’ – The Rag Trade, Are You Being Served? This was also a function of the employment opportunities for women. Since the 1970s, women in leading roles have been more common (but the most successful comedies have tended to be based on couples rather than single women).

Don't use plagiarized sources. Get your custom essay on
“ Gender roles in Sitcoms ”
Get custom paper
NEW! smart matching with writer

Based on television analysis it is very simple to notice what it means to be a mother, from the television’s perspective: to be a mother means to cook when your husband is hungry, to clean the house when necessary, to take care of the children etc. To be a father means to work and to come home expecting a cooked meal for whenever you are hungry, to make the tough decisions and to be the dominate figure in the household.

Television is saying a lot about the roles of male and female couples. In what concerns the female types in sitcoms, Roy Stafford suggested a specific classification, across comedy and drama since the 1950s:

“A young-looking witch named Samantha meets and marries a mortal named Darrin Stephens. While Samantha pledges to forsake her powers and become a typical suburban housewife, her magical family disapproves of the mixed marriage and frequently interferes in the couple’s lives. Episodes often begin with Darrin becoming the victim of a spell, the effects of which wreak havoc with mortals such as his boss, clients, parents, and neighbors. By the epilogue, however, Darrin and Samantha most often embrace, having overcome the devious elements that failed to separate them.

The witches, most having names ending with the soft “-a” sound, and their male counterparts, known as “warlocks”, are very long-lived; while Samantha appears to be in her twenties, many episodes suggest she is actually hundreds of years old. To keep their society secret, witches avoid showing their powers in front of mortals other than Darrin. Nevertheless, the perplexing inexplicable effects of their spells and Samantha’s attempts to hide their supernatural origin from mortals drive the plot of most episodes. Witches and warlocks usually use physical gestures along with their magical spells, and sometimes spoken incantations.

Most notably, Samantha often twitches her nose to perform a spell. Modest but effective special visual effects are accompanied by music to highlight the magic.” (Wikipedia, Bewitched, ONLINE) “Bewitched” is one of the many examples were the father goes out to work and the mother stays at home, cleaning, cooking, taking care of the children. Samantha attempts to denounce or leave her witch world behind because she is now married to Darrin, a mere mortal, for whom she would do anything. She is a home-loving wife who does everything to support her husband by promising to leave her magical powers at the door in order to try to live a normal life as a housewife.

”Jewish-American Fran Fine, fresh out of her job as a bridal consultant in her fiance’s shop, first appears on the door step of Broadway producer Maxwell Sheffield (Charles Shaughnessy) peddling cosmetics, and quickly stumbles upon the opportunity to become the nanny for his three children. Soon Fran, with her off-beat nurturing and no-nonsense honesty, touches the whole family as she gives the prim-and-proper Maxwell and his children a dose of ‘Queens logic,’ helping them to become a healthy, happy family, a family that she later fully joins when she becomes engaged and then married to Maxwell.

She then adds to this family of five when she and Maxwell have fraternal twins. Other characters include sardonic butler Niles (Daniel Davis), and Maxwell’s socialite business partner C.C. Babcock (Lauren Lane), who views Fran with jealousy and skepticism.” (Wikipedia, The Nanny, ONLINE) ”The Nanny” ” is no longer the type of sitcom where the wife stays at home and just her husband goes to work. Compared with ”Bewitched”, this sitcom is more modern and more different in what concerns the gender roles. Fran Fine is no longer just a home-loving wife who does everything to support her husband, but she exposes her point of view and most often she dose so as everyone to do as she wants to. She has a stronger character and is more independent comparing with Samantha.

”Jules Cobb – a recently divorced single mother exploring the truths about dating and aging. Jules spent most of her 20s and 30s married to Bobby and raising a son, Travis. She tried to relive her 20s and make up for lost time by dating younger men, but has since come to terms with the limitations of her age and has had relationships with men her age. She resides in a small town in Florida and is a real estate agent who is successful in business. Because she has been out of the dating world for a while, Jules discovers it is difficult to find love again.[10]

A close-up of her driver’s license in a season 2 episode reveals her full first name to be Julia and her birth date to be November 15, 1968 (age 43).” (Wikipedia, Cougar Town, ONLINE) ”Cougar Town” is a modern sitcom with modern elements, modern characters and modern women. The home-loving wife, the devoted mother to the family, the wife that does everything for her husband and for supporting him, the wife that just stays home and takes care of the children, cleans the house, cooks, is no longer the type of the female character used in this sitcom. Here, Jules is a modern woman that decides to find some excitement in her dating life. She is divorced and is more concerned with her ​​looks than her family. Jules is working, is going out with her friend, dates younger boys, wants to have a perfect body so she can hide her real age…so, she is a modern woman with modern desires.

Television is a powerful influence in determining the roles of men and women in society. Young people are especially influencd by its portrayal of gender roles. ”Throughout the history of television, the role of the housewife and mother has changed from a subservient woman to the more controlling, powerful, and dominant female portrayed in today’s culture. In early television, the 1950’s and 1960’s, the housewife or mother was always seen as submissive towards the more assertive father or husband. In Common Culture, Harry Waters explains in his article, “Life According to TV,” that males often got a deviation of roles, and females were usually playing the part of a mother, wife, or girlfriend. (Waters 167) As time progressed, that role was changed to a more authoritative and domineering woman who controlled a somewhat of a bumbling idiot of a husband.” (Example Essays, Roles Of Women In Television, ONLINE)

There are no limits to what the genders can do. Now days you find most women out in all of the workplaces which were once deemed male oriented. And you find men staying home and raising families, doing the job that once only women did. ”The idea of feminity has evolved over time just as women’s roles in the media have. Women on television in the past had very few roles but the main one was to be the wonderful mother of the wholesome family program. […] In today’s society women are not expected to stay home and live off their husbands, women are not even expected to get married or to have children if they so choose. Women’s roles on television have changed from the housewife to the working woman. Yet the woman’s role is still usually a support of the leading character who happens to be a male.” 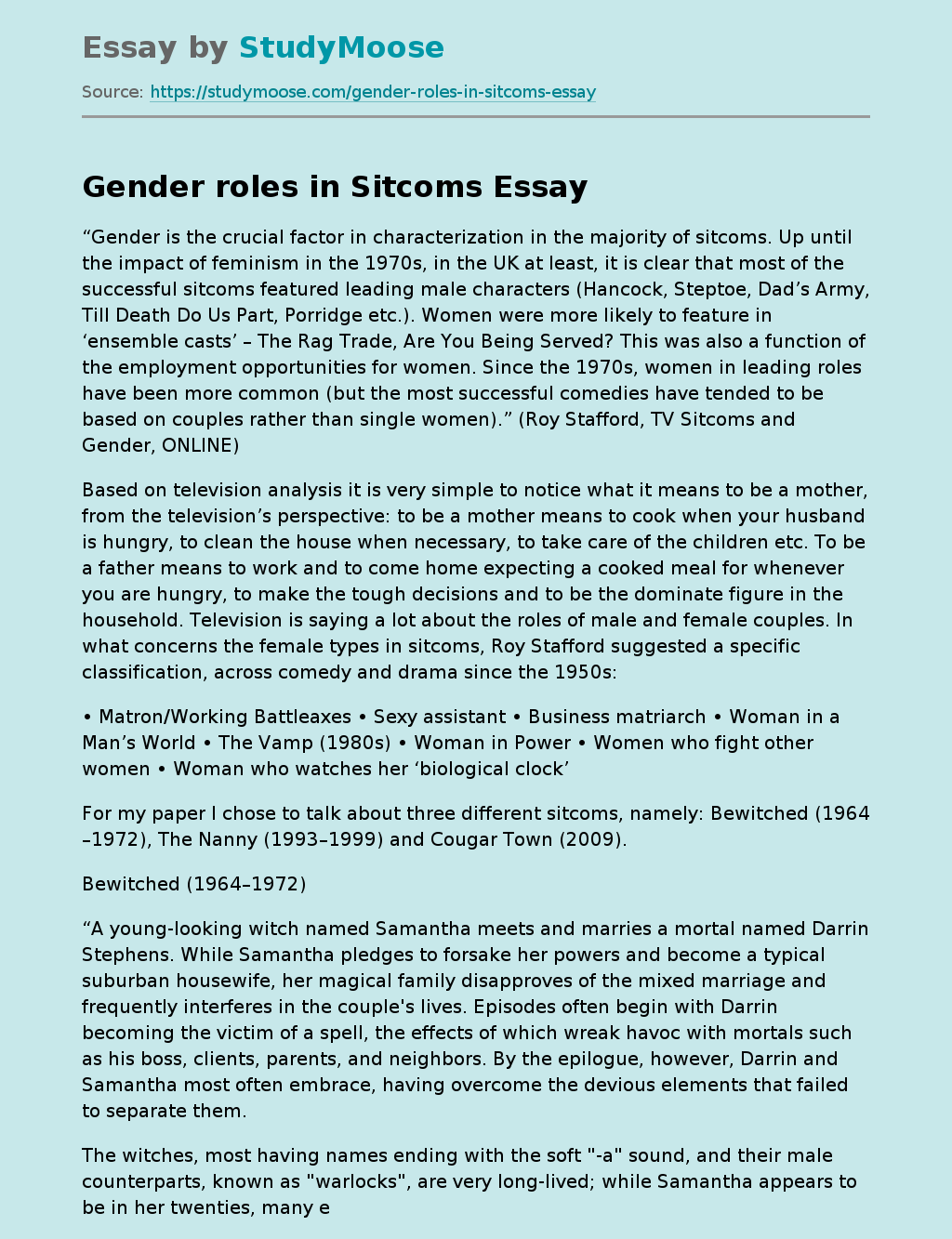