“We’ve begun to raise daughters more like sons…but few have the courage to raise our sons more like our daughters,” (Gloria Steinem, American feminist). Gender roles refer to the set of social and behavioral norms that are considered to be socially appropriate for individuals of a specific sex in the context of a specific culture (Wikipedia). Gender roles are expectations of how an individual should act, dress, talk, walk, etc. based on their sex, which is biological. Gender roles shape the pressures and expectations society places on male and female individuals.

Don't use plagiarized sources. Get your custom essay on
“ Gender Roles ”
Get custom paper
NEW! smart matching with writer

For instance in the old American culture men had to be the main source of income in the family, while women were expected to stay home take care of the children and do the domestic housework. In the short story “Girl” Jamacia Kincaid illustrates the feminine roles her mother taught her growing up and the expectations she needs to meet as a women, a wife, and a mother.

In contrast with Kincaid, Michael Kimmel’s essay “Bros before Hos: The Guy Code” explores the code of masculinity that young men are expected to follow. Traditional gender roles influence many individuals in a positive or negative aspect as they grow and either resist or give in to the expectations within society.

Growing up as little girl, my mother would always teach me the social expectations of the feminine roles associated with our tradition. I would always be playing with dolls, dressing in skirts, putting bows in my hair, pretending to be a princess and acting like Dorothy from the Wizard of Oz always clicking my sparkly red shoes.

The view of femininity in the culture I was raised with compared to old American culture of the 50’s and 60’s. Women were seen as objects, accessories. Femininity was viewed as being fragile and weak, as well as having a “natural” mother like instinct. Women in my culture are defined as being dependent on a man, stay home do the groceries shopping, clean the kitchen, prepare breakfast, lunch, and dinner, iron their husbands shirt and pants, “wash every day, even if it’s with their own spit” (Kincaid 385), keep the household in order, and be the perfect wife, mother, and women or at least pretend to be. However, these traditional views of what feminine roles are defined as conflict with the mainstream American culture of today’s feminine expectations. Women in today’s culture are defined as either the main source of income or contribute the equal amount of income with their spouse. Women are seen as independent and many women have established stable careers. In “Bros before Hos” Kimmel asked a female college student what it means to be a women she stated, “’Nobody can tell me what it means to be a women anymore’” (462). In modern American society being a woman has no concrete formulated expectation or role that she is expected to fulfill.

Although in today’s modern American society views women differently as they once did, my culture still views women in a more traditional aspect. These conflicts or being independent or dependent, pursuing a career or being a domestic house wife and mother affect both expectations I have to meet with my family culture and the culture I was born into. Being one of the youngest girl in my family I would observe my cousins and see them being pressure of the roles and expectations that where concretely defined in my cultures view of femininity. Their decisions of following the domestic housewife role affected me to resist these pressures, while they did not and gave me the courage to fulfill my and modern American society’s expectations of what being a woman is and not just stay at home and spend all my husbands’ money because I have nothing better to do.

Gender roles have always been a social issue that shape the way we think of others. These roles perceive women as fragile and weak, while men are seen as aggressive and show little to no emotion. Gender roles can vary from one culture to another and have different expectations associated with masculine and feminine roles individuals have to obtain. Gender expectation such as women have to stay home and do the domestic housework, while men are the source of the primary income can either conflict or reinstate the expectations of you. These roles can affect an individual either in a positive or negative ways, whether or not they want to override the social norm of what society says is acceptable or give into the pressure of the roles society established for each gender. The gender roles one’s culture establishes or society establishes becomes more overwhelming as we grow older, enforcing these expectations further. Also, your culture’s view of masculinity or femininity may conflict with mainstream American culture and a rise conflicts for an individual. It’s up to them whether they want to endure the pressures or resist the pressures of traditional gender roles or modern American gender roles. Word Count: 1,025 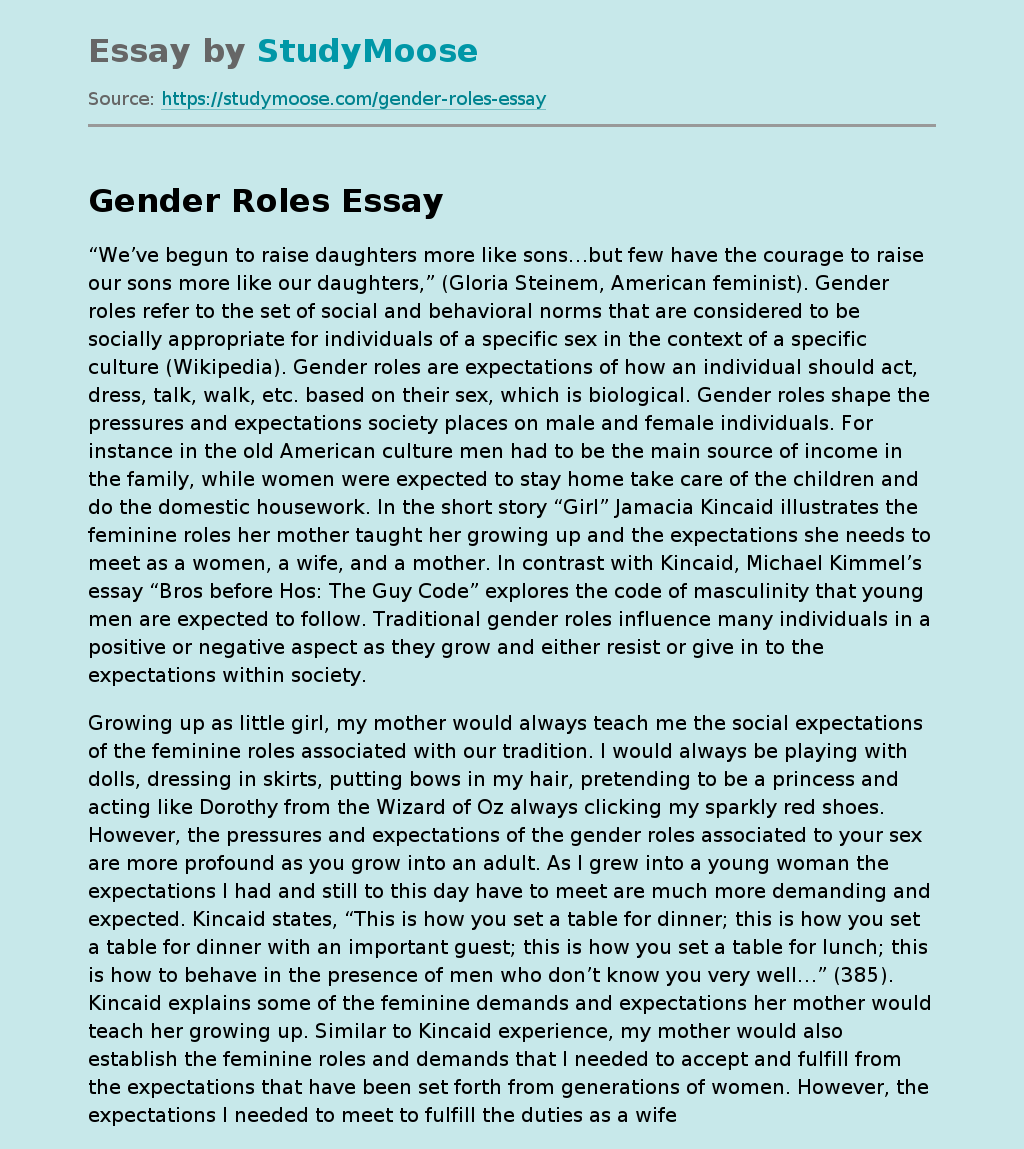