Gender Roles and Inequalities in Psychology

Don't use plagiarized sources. Get your custom essay on
“ Gender Roles and Inequalities in Psychology ”
Get custom paper
NEW! smart matching with writer

In most cultures, both genders are expressed in gender-specific ways: males are seen more as role-models’ due their more masculine characteristics such as their courage and confidence however, females are seen as less bold and are represented to ‘shy away’ more than males. Males are also portrayed in a wider range of higher-status roles than women are.

We live in a society where genders are not treated equally and where women are at a high risk of being mistreated in the home, within relationships and even in the workplace.

Psychological Science, a journal created by the Association of Psychological science, showed that “a persons’ sexism can lead to the development of gender inequality as a whole in society.” This suggests that a persons’ sexism, which is otherwise also known as discrimination against men or women, can significantly cause another individual to feel as a victim of gender inequality. For example, women that are faced with sexism and further gender inequality makes them feel as though they cannot take financial risks. In this society, people assume that women are more risk and loss adverse then men – this means that women are more likely to make safer and more cautious financial and any other decisions. This is a form gender stereotyping assuming one gender is more financially aware than the other gender. This begins to influence the gender that this negative stereotype is being inflicted on and therefore, gender inequality is reinforced within society. Being faced with such a negative inequality and stereotype on one person can begin to affect intellectual thoughts and decisions of an individual. Stereotyping can tamper with cognitive abilities as a person may think that they are less capable of carrying out normal tasks that both men and women are capable of and therefore, cognitive and intellectual performance are harmed.

There are ways to change people’s attitudes towards treating genders unequally it is possible to change people’s negative perceptions and alter cognitive abilities to make something seem socially acceptable and morally correct. Psychology sees a way to do this through social theories to bring a more positive effect and change towards gender equality. There are a variety of social theories that include cognitive theories, perceptive theories and combined with fundamental psychological theories.

Changing people’s attitudes through cognitive dissonance means that we can make a sequence between negatively stereotyping genders unequally and positively stereotyping genders equally. This can be through many means, with one of the most important methods being through schooling. The education system is a way of raising awareness and showing a practical demonstration of how we can deter people against believing that there are unequal chances between genders. It all starts from addressing the idea to prevent these negative thoughts from the get-go and reinforce these with a broader, more positive outlook. The education system can advertise through schooling and help to challenge gender inequalities through psychology and cognitive impacts on oneself.

Therefore, using self-perception theory and attribution theory, we can make the assumption that the laws and rules that are enforced on gender equality will one day make an impact on our society as we will come together to reinstate these rules. As a society, we should acknowledge that there are laws that give men and women equal rights and responsibilities and through self-perception and attribution theory we can slowly make laws like this more aware to more and more individuals.

Fundamental attribution error addresses gender inequality in psychology because it raises awareness for victims of abuse or domestic violence to take their emotions and experiences about being victims of this into consideration and evaluate if they want to make a stand against these actions of the perpetrators for other individuals suffering. Knowing that people suffer from being treated a certain way due to gender discrimination will raise awareness and can ultimately influence people to change their opinion about not making a stand against abuse and domestic violence. Fundamental attribution error plays a part because people have a tendency to make internal attributions about a situation in which they know nothing about as the ‘norms’ are not made clear and blaming the victim is a situational explanation that unfortunately dominates and causes dissonance. This is because individuals tend to use explanations like ‘we are solely responsible for our actions’, meaning that people do not see other factors affecting behaviour other than using personal error as a blame mechanism. Psychology allows us to have a direct explanation for these views and why people have these irrational views of others.

To conclude, psychology has a broad range of theoretical explanations to identify the reasons for peoples internal and external thoughts about gender inequality. Psychological theories can be the basis of understanding to motivate and make society as a whole aware of the intense gender inequality that still exists today. Gender inequality is ultimately a subject that is always undergoing change and differences of opinion. With the help of sociological and psychological theories, we can alter and manipulate behaviour to make sure that gender inequality is a topic that becomes more equal in the future making society a more equalised one, with positive attributions and more opportunities for every individual with great emphasis on gender equal opportunities and options.

Gender Roles and Inequalities in Psychology. (2021, Feb 03). Retrieved from https://studymoose.com/gender-roles-and-inequalities-in-psychology-essay 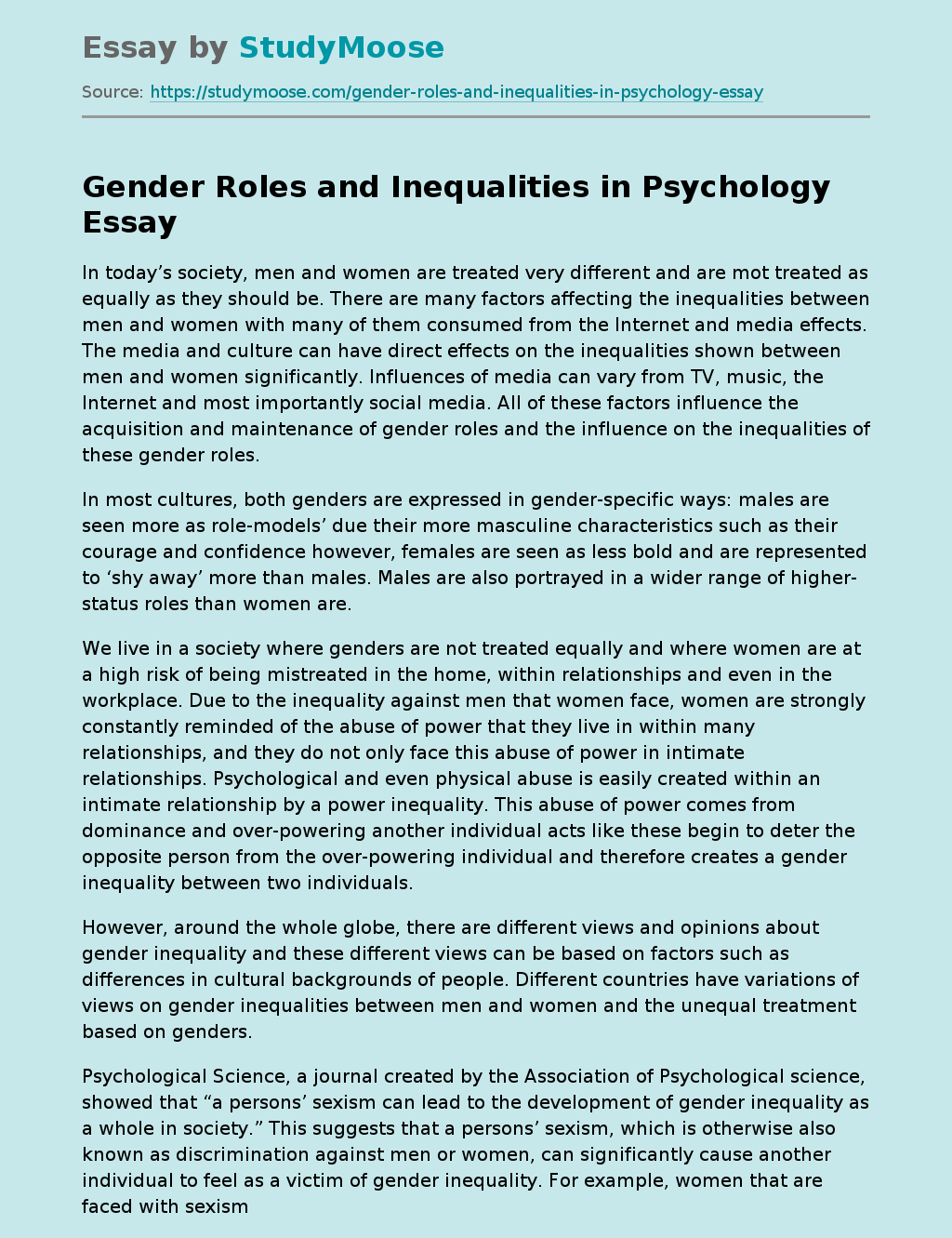