Titanic was a British passenger liner separated by a class system that would end up colliding with an iceberg resulting in it to sink. There were limited lifeboats that’s seating would be greatly outnumbered by the passengers. If one was to survive the sinking of Titanic they were likely a woman, child, or upper class male. In the film there were two main sociological concepts that were overwhelming when compared to the rest, gender roles and class inequality.

Don't use plagiarized sources. Get your custom essay on
“ Gender Roles and Class Inequality in Titanic Movie ”
Get custom paper
NEW! smart matching with writer

Women would work towards impressing men because there was no other way women could take care of themselves without a man. Rose’s mother pressures Rose to marry rich because their family is out of money and insists because they’re women they don’t have choices, and within the film this appears to be true. Women would sacrifice their comfort for beauty in order to impress the men. Men would discuss business and politics amongst themselves because it was believed women weren’t capable of understanding such issues.

Rose’s fiancé commands her on how to behave similar to an animal, when she speaks up for herself her fiancé becomes aggressive until Rose becomes submissive and complies with his orders. Rose’s fiancé doesn’t see his treatment towards Rose as inappropriate because he grew up with social privilege and was treated like a hero because of the set power structure, this is similar to the treatment of athletes and their violence acts towards women (Preventing Violence Against Women & Girls: Steubenville & Sport, Mayeda, 2013).

The athletes grew up receiving social privilege without it being earned and their negative actions were overlooked because of their athletic performance. If you were to ask “If her fiancé had been spending time with another woman would rose have yelled at him and flipped a table?” the answer would likely be no, because the female gender isn’t to be viewed as masculine and aggressive.

Class separated the passengers aboard Titanic and would dictate the treatment of individuals. The class system in the film and can be directly referenced to the class system in “From Gap to Gucci” (From Gap to Gucci, Witt, 2007), when Rose’s fiancé identifies Jack dressed as a rich man, he says “Amazing, you could almost for a gentleman”, indicating Jack cannot and will not be considered gentleman without money. Aboard Titanic the rich were displayed as sophisticated and intelligent, while the poor were displayed as a dirty group who drinks beer, gets overly obnoxious during gatherings, and have a lack of intelligence. Upon boarding the ship lower class went through health inspections, while the higher class had their bags carried and would board the ship immediately without being inspected because of their socioeconomic status.

While Titanic was sinking it became Jack and Rose’s fiancé’s mission to save Rose, but if the genders were to switch between those three it would be likely that Rose would be the hero and at would be Rose’s duty to save the other two. This reinforces gender roles and the idea of heroism attributed to men. After Titanic sunk Molly, who was labeled as “New Money” proposed the lifeboat go back for the disadvantaged because of the extra room available, her proposal was immediately dismissed and she was threatened by the captain of the lifeboat if she continued to rebel, this depicted the women in the film as weak. This compliance to the captain immediately reflects Milgram’s study on obedience. Molly is similar to the participants electrocuting the stranger and the captain is like the doctor in the lab coat, and because the captain is in charge nobody considers questioning his authority (If Hitler asked you to electrocute a stranger, would you? Probably, Meyer, 1970).

Jack was accused of theft, and because he’s not advantaged like the upper class it was easier for him to be punished, despite him being set up by Rose’s fiancé. Jacks lower class standing made his word invalid when put against someone of a higher class, which was similar to the Roughnecks, whose word generally meant nothing to the police because of their social class and viewing within society (The Saints and the Roughnecks, Chambliss, 1973). The poor were locked into their living quarters while the upper class was being loaded onto the lifeboats. It was apparent that the comfort of the upper class was more important than the lives of anyone beneath their socioeconomic status.

Throughout the film there are multiple patterns, men are heroic and to be pleased by women, women are helpless and can’t attain a comfortable lifestyle without a rich man, and the treatment of an individual will be entirely based on their standing within the social class system. The white men are in power because of socially constructed gender roles that were created by white men. Rose’s fiancé says “I make my own luck” and doesn’t realize this “luck” he makes isn’t really made, but rather a system of advantages and disadvantages put in place by rich white males which perpetuates both gender and class inequality. 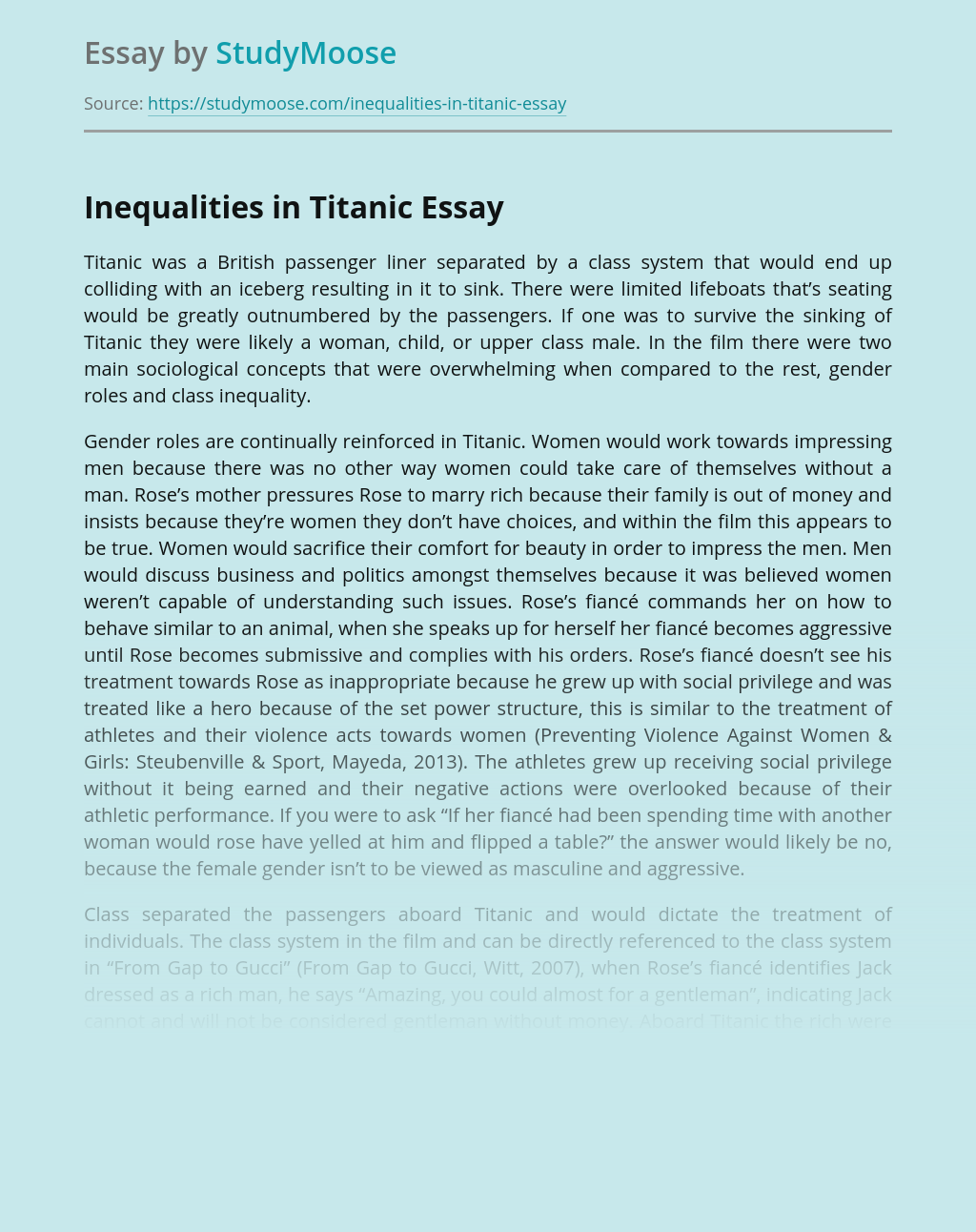