Gender inequality and discrimination in organizations will damage the individual quality of life in relation to Maslow’s analysis of human needs. Especially for higher order need which are needs for social, esteem and self-actualization.

Women experience gender inequality in workplace. Although there are many women who earn more than men, the average women earn is still lower than men’s. A study has found that in 1992, the median earnings of a year-round, full-time woman worker was $21,440 and for a man worker it was ,358.

Don't use plagiarized sources. Get your custom essay on
“ Gender Inequality in Workplace ”
Get custom paper
NEW! smart matching with writer

Thus women, on average, make about 71 percent of what men make. Women age 45 or over, on average, have a net worth of 64%of men’s asserts, $282,826 compare to $430,650. On the other hand, when organizations hiring people, many executives have a subconscious that men can do better than women for some particular job. Many women feel that “if we try to climb the corporate ladder, we bump our heads on a glass ceiling, beyond which we cannot climb.

The glass ceiling metaphor for subtle gender discrimination in the corporate world.” In fact, in many people’s pespectives, some jobs are designed as the jobs men should do but women, such as actuary, financial analyst, financial engineer, administrator, professional specialist and so on.

It is gender inequality which is unfair. While women are moving into the professions, they are stalled in the lower-paying positions. Because this phenomenon has existed for a very long time, there appeared occupational segregation meaning that women sometimes been considered as somebody who do not fit for any particular jobs.

This kind of discrimination has leading an earning gap between men and women. For every dollar a man earned, a women earned, on average, 71 cents according to the Womens Bureau of the U.S. Department of Labor. It has been estimated that one-half of the earning gap is due to direct discrimination in the labor market. Thus, women desire more for the need of self-actualization because they believe it will be more harder for them to develop their creativity and problem solving skills, also, harder to reach their goals. What people lack is usually what they need. Women eventually have more need than men for self actualization.

Women experience gender inequality in social life as well. Many people still consider women is that group of people who should be in the lower class of the society. Gender discrimination is still a serious problem. An on-line consultation has ask a question that whether you agree gender inequality should be a highly priority or not. The answer show that 85.6% of respondents strongly agreed or agreed that gender inequality should be a priority. Another question was considering the issue if government should increase funding support for women’s organizations working for equality and bring women’s equality into attention of policy maker. The result can be translated into an average of 4.19 (5 in total), which indicates that the respondents generally agreed. For education, on the other hand, is more obvious.

In many parents’ subconscious, born a boy is much better than a girl, because they believe boys can be more successful than girls in the future. Depending on those thoughts, parents will let boys to go to school and been educated but leave girls at home to do some bacis housework. For instance, in China, in primary school, girls constitute only 44 percent of primary school enrollment. In secondary school, girls make up 39 percent. At college level and higher, women account for only 26 percent of enrollment. Thus, for the esteem need and social need, women have more on those than men. Women want to have more respect from other people, they want to be identified by their success. On the other hand, because of women’s nature characteristics, they will have more need on sex intimacy as well. 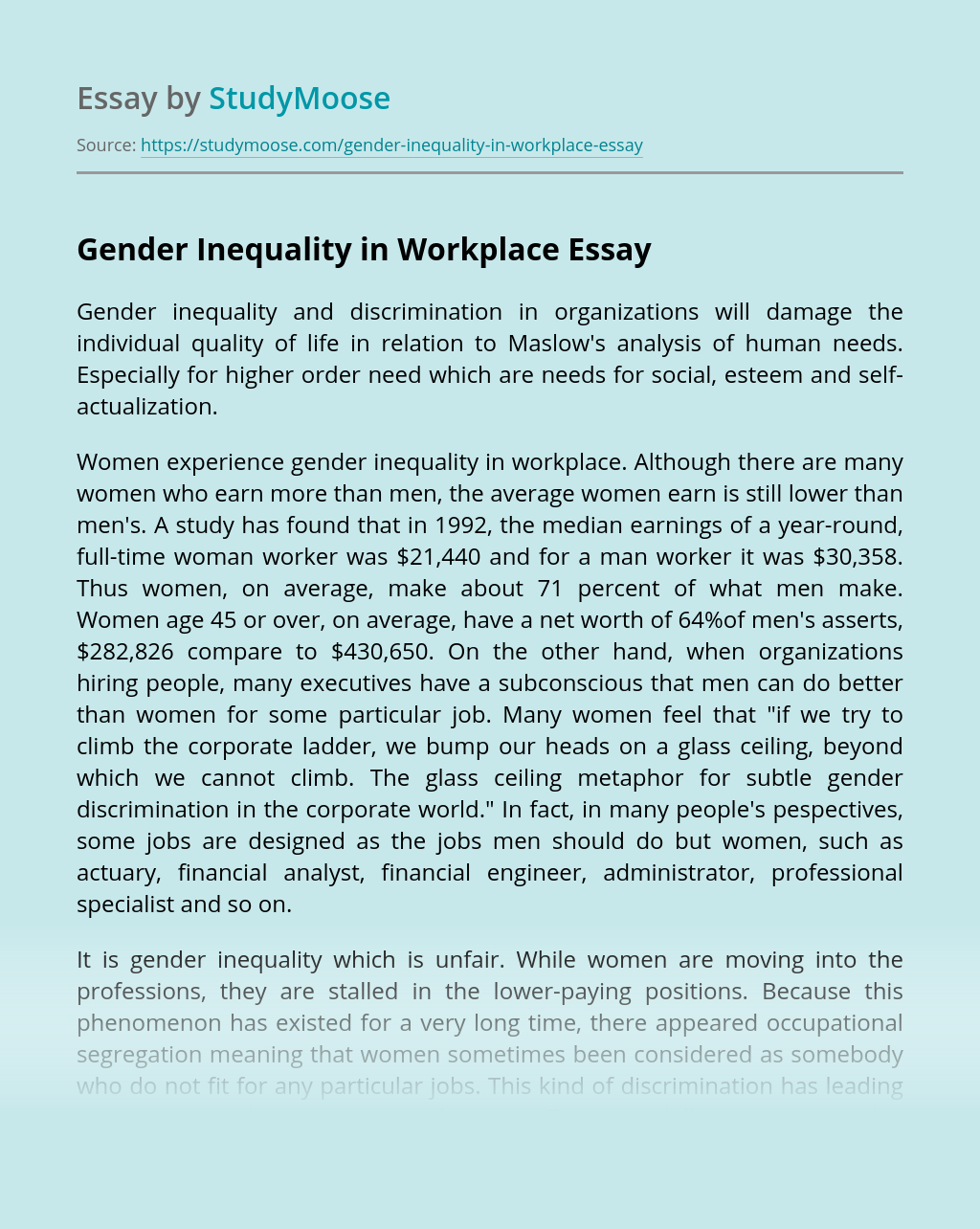