Gender Inequality is the unjust behaviour or insights of people on the basis of gender. In regards to education, we can then say, gender inequality in education is the discrimination of individuals based on gender in schools. When talking about this gender inequality it is quite obvious that the ones being discriminated are the females. Education is a fundamental right, which should not be restricted to a certain gender, every human being, male or female has a right to education. No matter the form of inequality it is bad for an economy and well-being.

Don't use plagiarized sources. Get your custom essay on
“ Gender Inequality in Education ”
Get custom paper
NEW! smart matching with writer

The impact is more severe if when it is viewed from the perspective of gender and even more detrimental when the resources allocated are unfair against women. A society that its hierarchal organisation have a habit of placing men in choice making positions and women demoted to economic work that seeks limited work and does not give them the satisfactory resources of means of support is a society that is put in danger.

This issue of gender inequality in education is far more prominent in less developed countries, plus Nigeria where quite a number of readings have shown that under the backings of religion and tradition the men discriminate against women hence divesting them access to skills and education for useful activities. (Ijaiya & I.O.Balogun) In general education is well-defined as a long life progression through which a person’s progress is smoothed so that he can be beneficial to his society and to himself.

From this definition, my concern here is the western education because it the most important form of education in the world which is more prominent and its achievement, regardless of what level one has attained is seen to be very significant to the development of an economy, since it allows people accomplish new tasks and to assess and adjust to new jobs. Gender inequality in education affects a lot of things in countries, it affects economic growth as it brings down the level of human resources because when some of the population that could have contributed to somethings are not educated, they do not amount to much in the society. There has been a lot of concerns with women when it comes to education and it is not a new thing.

History of Gender Inequality in Education

For some time now, there has been a change in gender success all through education; in the late 1980’s underachievement by girls was common; girls were less likely than boys to gain one or more A-levels and also not likely to go on to advanced education. In the 1990’s there was a quick reversal; girls started doing better than boys. In the year 2006 10% more females were gaining more A-levels than males. This gender diversion has been viewed from a social perspective. (Gender and Educational Attainment, 2014) In the 1990’s gender discrimination was still evident in the society though women were attaining greater success throughout work and education. The Education Reform Act of 1998 (important piece of education in Wales, Northern Island and England) which brought coursework helped girls as they tend to be generally more organised and care about the how their work looks than the males.

Feminists consider that the purpose of education ought to be to benefit and advantage disadvantaged women. In a feminists view this is not wrong as what that is what they seek. The 1998 Education Reform Act indicates clearly that women are to be given more chance to attain education. Some girls were interviewed in the 1970’s and others were interviewed in the 1990’s, it was found that main concern had changed, it had changed from marriage and love in the 1970’s to careers and jobs in 1990’s. From this it is quite obvious there has been an increase in career ambitions. Two things could have influenced this, contemporary socialisation from media and parents or achievement from course works. (Gender and Educational Attainment, 2014)

Wellbeing and Gender Inequality, according to the World Bank a key determinant of wellbeing in a country is the presence of a stable economy and its growth. Inequality is frequently referred to as lack of equivalence. One of the concerns of gender inequality when it comes to education is that it could pointer to a whole great deal of violence against women, which might make it hard for them to talk about issues of power. If this inequality is such that leads women into having little access to education as well as limited skills for dynamic employment, it will have an effect on them when it comes to poverty of the present and also of that of the next generation. An illiterate woman with restricted access to income cannot take care of her children in regard to nutrition and health; and a woman with so much work and has no regular access to income might use their daughter’s labour for survival which might end up depriving them of a chance to gain education. (Sheehan, 2012)

It is also observed that gender inequality in education may weaken development goals. It may avert increase in child mortality and fertility and the increase of education on the next generation. There is absolutely no doubt that education has a main impact on economic growth, as the more educated people in a society, the better the economy of that society. Studies have conventionally used years spent in schooling as a variable to measure education. There is a strong proof that quality of education is more essential than the quantity of education. Gender inequality in education influences education indirectly, through dissimilar ways such as by dropping the fertility rate, growing life span of population and social unity. Gender inequality has a negative impact on the outcome of education, which will also have a negative impact on the economy’s growth. These can happen in so many ways. Girls who are schooling in a school where there is high inequality might end up believing there will inequality in the society, which might hinder their opportunity for success in life.

These would lead to decrease in their performance in school. Gender inequality does not only manifest itself in education but also in other areas, like, politics, education etc. (Sheehan, 2012) While numbers of children not in school has dropped, and number of girls not in school has declined from 58% to 54% in 2010, in some countries there has been limited progress in children getting into schools, many which are girls, and girls from poor households continue being one of the groups at jeopardy of never attending school. In 2006 in Pakistan, 60% of children not in school were girls while only 12% of poor Hausa girls in Nigeria went to school. The odds of getting to school are not in favour of girls from poor households. Girls’ enrolment in Yemen is vividly much lesser than boys and the same case goes for Pakistan when attendance is the case analysed. (Engendering Empowerment: Education and Equality , 2010)

It is seen also that gender is not regarded as a serious issue compared to poverty, some officials in the South African Education Department said: Gender is not a primary issue to them because they deal more with poverty, whether one is male or female poverty is still poverty, they get to deal with hunger and that does not discriminate. From what they can see, gender is not an issue. Poverty is an issue also but to think it is more important that gender inequality in education is totally wrong, from what I have said earlier, the more educated people the lesser the chances of poverty, so, a way to tackle poverty is to tackle gender inequality in education first.

Another South African is worried that focusing on gender will distract from the poorest needs, saying that there is a risk involved with having too much emphasis on gender issues, saying that it is an issue that would be taken well in resourced areas rather than areas with the majority being the poor. (Engendering Empowerment: Education and Equality , 2010) In conclusion, what this paper is saying is, Gender Inequality in Education is an ongoing issue that is declining but not going away anytime soon. It is a problem that comes with its own problems, meaning it affects economic growth and development. A way to decrease the number of inequality is to educate people especially those in the rural areas that the girl child’s education is just as important as the male’s child. Every individual male or female should not be discriminated on the basis of anything talk less of education, education is key. Say NO to Gender equality in Education. 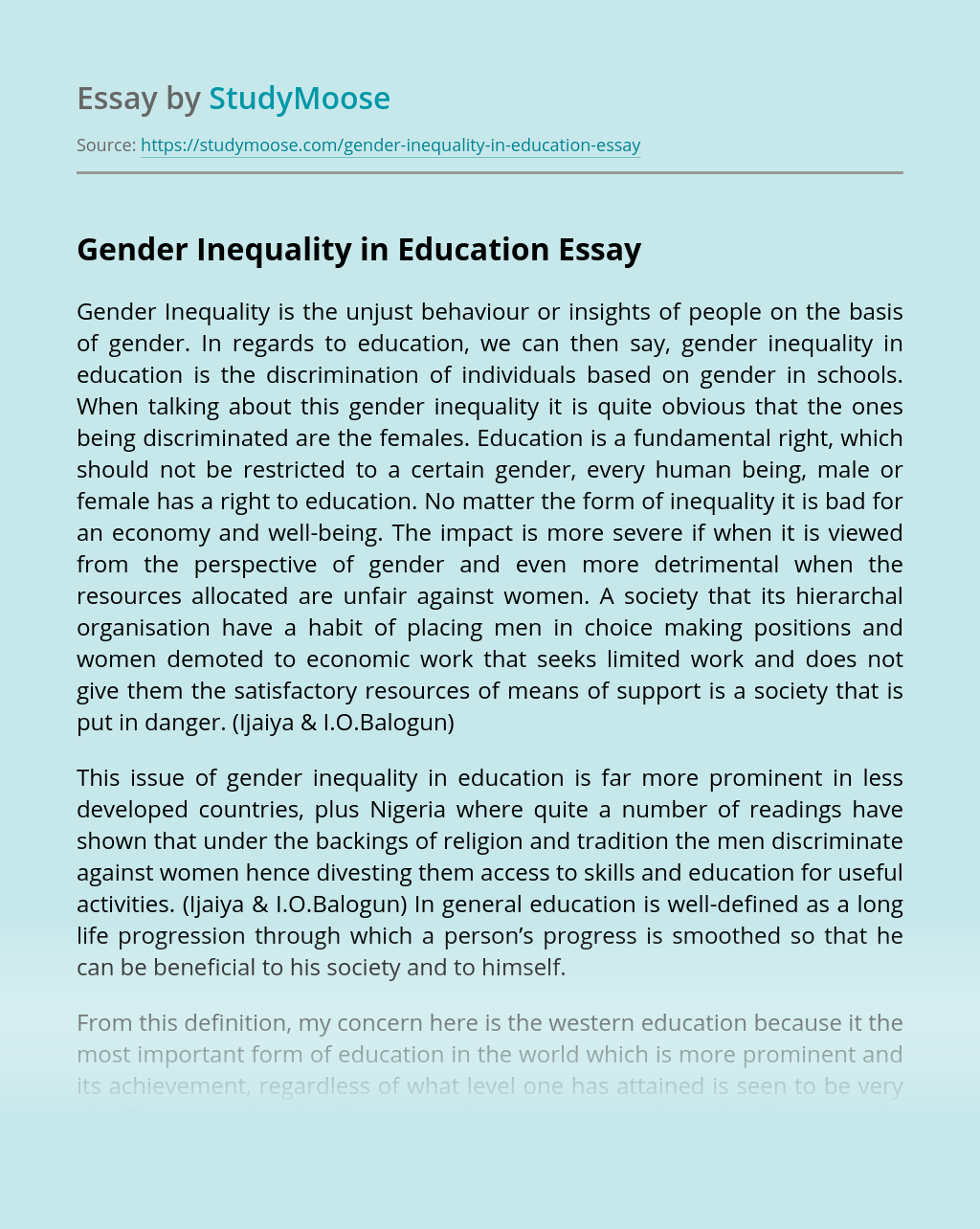