Gender Inequality is the differences in the status, power and prestige women and men have in groups, collectivities and societies. Gender inequality usually affects women more than men due to the status in society. Many women are affected in the workforce due to gender inequalities, in many countries such as Iraq and Afghanistan women are held at a lower position to men. In countries such as those, women are thought of as property other than human beings. Why does gender inequality happen? The answer to this question is not as simple as it may seem.

Don't use plagiarized sources. Get your custom essay on
“ Gender Inequalities ”
Get custom paper
NEW! smart matching with writer

The most enforcing cause of gender inequality would be stereotypes. Typically women are thought of as housewives, to stay home, cook and clean, and take care of children. Men are suppose to be the breadwinners, they are suppose to work and support the family. In modern society the thought of the typical “housewife” has changed. Ever since the Rosie the Riveter revolution during World War II, more and more women are working in the workforce instead of staying at home.

Even though during this time women were encouraged to take the place of their men and work in the workforce, a glass ceiling was still created keeping women unable to be promoted and gain higher positions.

Interesting enough, almost 40% of women today make more than their husbands, and women today make up almost 60% of U.S. college students and earn the majority of doctorates and master’s degrees. So why does gender inequality still exists? Its a long interval of gender differences, including roles of biology, gender socialization, and findings from other cultures.

Also the different forms of gender inequalities suchs as women in the workplace, inequalities at work, and the gender pay gap take a huge toll on gender inequalities. As the differences between girls and boys are explored, the differences between men and women are also explored. Many scientist say that nature vs. nurture has a huge involvement with the biological makeup differences of men and women. A quote from Intro to Sociology states that “Scholars disagree about the degree to which biological characteristics affect gender identities as “feminine” or “masculine” and the social roles based on those identities. The debates is really about how much social behavior is learned versus innate (or “inborn”)”. (Intro to Soc 295).

I agree with this statement because the biological characteristics do not makeup a gender identities. Only because a woman is not built like a man does not mean she is more weak. Only because men were not exposed to more cooking and cleaning as much as a woman or young girl is, does not mean that woman or man is incapable of doing it. When thinking of the differences concerning men and women its hard to compare the behavioral differences to an overall audience. Depending on the different cultures, women and men have different morals and behaviors. For example women in Iraq are held as property to their husband, also in some Muslim countries, some women are stoned to death for wrongdoings. These example show complete inequality differences between men and women. For examples, as humans we are trained to think that woman can not perform strenuous work, its up to men to perform difficult task.

These stereotypes are the ones that create gender inequalities and make it unfair for women to gain equal rights. Most sociologist argue that a mans aggressiveness varies between cultures and that women are still are as aggressive but display their aggression in a more discreet manner such as using strategies and “bad mouthing” rather than physical fights. I agree with this statement, usually men are more confrontational because men always look to be the Alpha male. When women are in a confrontation, more women will be more sneaky and rather talk than just fight physically.

When it comes to the different forms of gender inequality, there are many different forms and disadvantages mainly pertaining to women. The first most common is women in the workplace, women in the workplace have more disadvantages than men. Another disadvantage would be the gender gap and pay. Men tend to receive a way higher pay than women. Each of these are examples of gender inequality, in the workplace it can be found most typical due to the stereotypical judgements of women working. The gender gap payment has a great affect on gender inequalities, since men are paid more this creates a glass ceiling for women trying to advance in the career path. In a quote by the feminist majority foundation, “In the Wall Street Journal/Gallup survey, women managers were asked what they consider to be the most serious obstacle in their business careers. Only 3% cited “family responsibilities,” but half named reasons related to their gender, including: “male chauvinism, attitudes toward a female boss, slow advancement for women, and the simple fact of being a woman.” (FF 1) This quote shows that the main thing holding back women in the working society is stereotypes.

Many women stereotypes claim that its family issues holding back our women from reaching higher levels. Many assume that if a women is a single mother, divorced, or divorcing this may take an effect on her work ability. In society when it comes to gender and family, each gender is expected to have a certain type of role. When it comes to family there are many different types and levels. Usually in a family women are expected to take care of the children and men are expected to work and provide. In this modern day society women usually do both, work and take care of their family. Since the beginning of humankind women were suppose to bare the children and men were suppose to provide for the family. Since this though was considered since the begnning of mankind its hard to earse this thought. Still til this day, women mainly do the cooking while men provide. Since women are mainly thought of being in the kitchen, its hard for men to picture women in the workfield. Since the beginning of time women have been thought of as the housekeepers. When World War II came around things changed and women had to step up to the plate. Ads such as Rosie the Riveter promoted women to get jobs and work outside the household. Before this time the life for a woman was boring and just an endless cycle of the same tasks.

Many books were written explaining the average life of the housewife such as “captive wife” by Gavron in 1966. During the 1970s and 1980s a spring of debates and research formed on family from feminist viewing this topic. Before feminist began to look t the value of family, the researched typically focused on the kinship and family ties and how society affects them. Feminist began to focus on inside the family to examine a woman’s experience in the domestic atmosphere. Many feminist argued that there was an unequal power instilled in the families and that more family benefitted more than the other. There are three spectrums that feminist found important when examining the importance of family. One is the domestic of labor, which is the way tasks are allocated among household members. Feminist tend to disagree about the historical upcoming if this division. Some view it as a effect of the industrial capitalism. Another theme would be unequal power relationships, which equals domestic violence. Many feminist argue that violent and abusive sides of families have been ignored in both academic contexts and legal and policy circles. feminist feel that the family serves as a gender oppression.

The last theme would be caring activities, this theme extends from looking after a person who is ill to looking after an elder. Not only do women complete household chores and child care they also have significant emotional labor in maintaining personal relationships (Duncome and Marsden 1993). Caring activities are grounded by in love, deep emotion, they also require an ability to listen, perceive, negotiate, and act creatively (Intro Soc 500). Women play a huge role when it comes to family and society. Women provide a nurturing environment for society because of their loving nature. Without a mothers nurturing nature, children wouldn’t have the ability to grow properly. A woman is the foundation to any family, without a woman a family wouldn’t be able to function properly. When it comes to a family women aren’t just housewives, they are the emotional base and protectors of the family. In conclusion I feel that men and women should have equal power, especially when it comes to the work force.

Many women have to deal with stereotypical comments in the workforce and sexual harassment. Harassment is also a big difficulty for women to proceed in the workforce, a quote from a Huff Post article “The HuffPost poll found that one in five women said they’d been harassed by a boss, and one in four said they had been harassed by another co worker. And although women were more likely than men to say that they had been victims of one or both types of sexual harassment, men also reported being sexually harassed — 6 percent said they were harassed by a boss and 14 percent by a coworker.” (Huff Post 1) This proves that women not only have to deal with stereotypes but also have to deal with sexual harassment which is even more difficult. Women should just have an equal position in status compared to men because, women can do anything a man can do. In some cultures such as Muslim cultures, women have little to no rights and sometimes even die for committing the smallest thing against their husbands. Women typically have it more difficult than men because women are seen as a piece of property rather than being their own person. Its concerns me how much we seem to belittle our women in society even though they are the foundation to any family and the rock to any man. 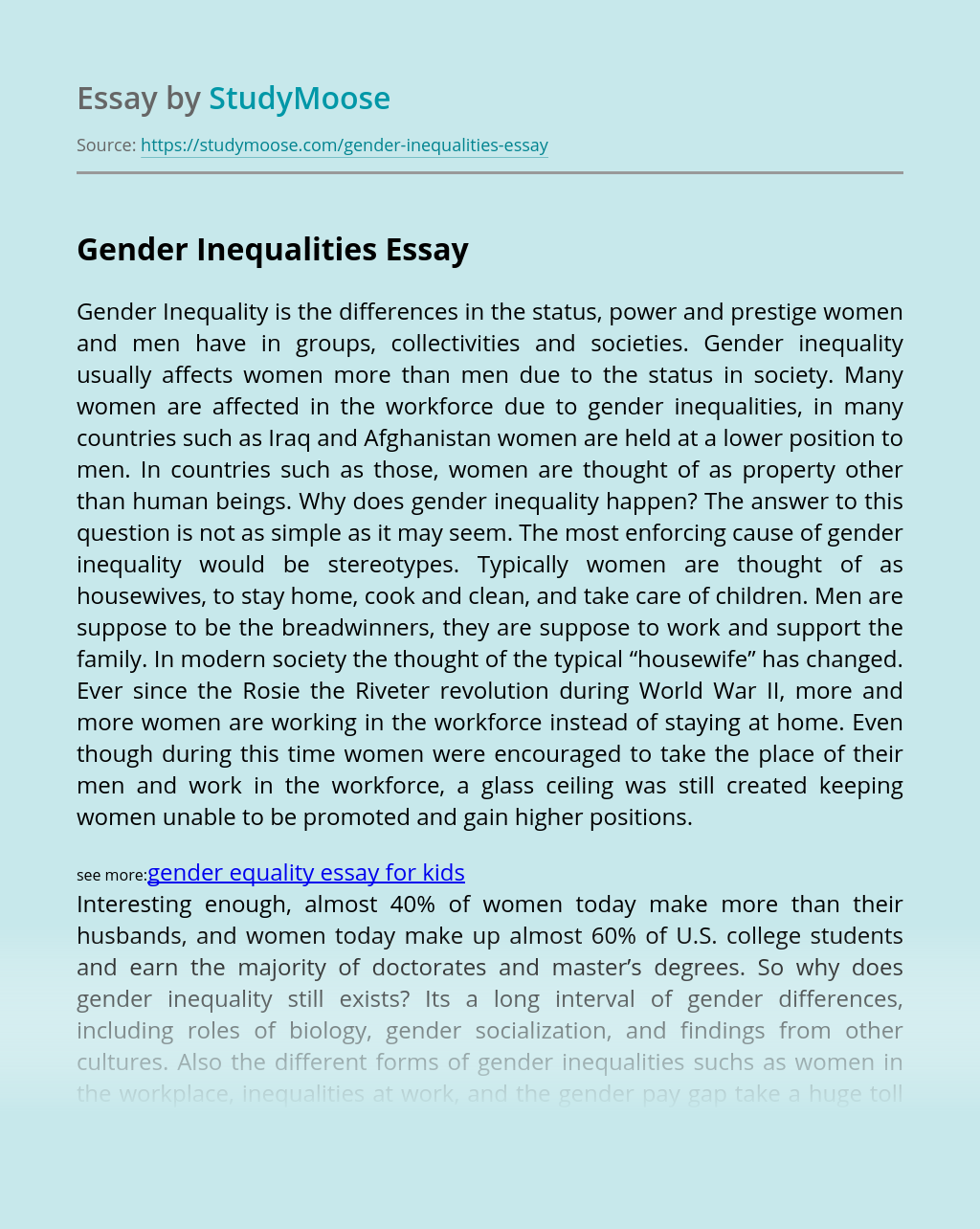