Gender in 'The Importance of Being Earnest'

Dramatic comedy originated in Ancient Greece in 5th century BC, centred around loose plot lines and exploiting certain situations through parody, farce and mockery. Comedy started developing in 4th Century BC where intricate plot lines were introduced, commonly based around love and romance and usually culminating in a satisfactory and happy resolution. This is much like the structure of ‘The Importance of Being Earnest’ as the play revolves around the growing relationships of both Jack and Gwendolen and Algernon and Cecily.

Don't use plagiarized sources. Get your custom essay on
“ Gender in ‘The Importance of Being Earnest’ ”
Get custom paper
NEW! smart matching with writer

Oscar Wilde has reversed the roles of gender in this play, the females are those who take the lead and are seen as the most dominant characters throughout – a very bizarre layout in a time period where men were seen as the head of the family and the most assertive figure. Lady Bracknell is the most domineering character throughout the play, and this a result of the eloquent and rather unnatural language she uses. She takes on the role of her husband in Act 1 when Jack asks for Gwendolen’s hand in marriage- “I feel obliged to tell you that you are not down on my list of eligible young men” this was often the father’s role.

Throughout the conversation it is quite apparent that Lady Bracknell holds all the power, and Wilde does this through all the questions she asks. Additionally, her questioning seems rather irrelevant and ridiculous at times, she asks “Do you smoke?” to which Jack admits he does and Lady Bracknell replies “I am glad to hear it.

A man should always have an occupation of some kind”. Here the addictive habit that Jack has taken up is being compared to a profession and is creating humour due to the nature of the question and how much apparent importance it holds. It seems as though Wilde is using Lady Bracknell to “mock those in authority” [1] by presenting her as a character with no real agenda to her long and painful questioning – other than to talk. In Act 3, Lady Bracknell makes another appearance, which only highlights her towering force in the play.

She has come to Jack’s house in the country to retrieve Gwendolen and take her home and makes it quite clear that her husband does not know where Gwendolen really is “Her unhappy father is, I am glad to say, under the impression that she is attending a more than lengthy lecture by the University Extension Scheme on the influence of a permanent income on Thought. I do not propose to undeceive him.” This would have been seen as quite unusual at a time where wives wouldn’t have gone behind their husband’s backs, thus reinforcing Lady Bracknell’s authoritative demeanour and leaving the audience amused.

Furthermore, Wilde’s portrayals of both Gwendolen and Cecily run parallel to one another. They mirror each other and are the assertive half of their relationships with Jack and Algernon. This is first shown between Jack and Gwendolen when Jack proposes. Jack announces his love for Gwendolen and she in turn, offers it back. Jack then says “..I mean we must get married at once. There is no time to be lost.” To which Gwendolen replies “…But you haven’t proposed to me yet. Nothing has been said at all about marriage.” Gwendolen is taking control of the situation and is expressing what she desires – for Jack to then grant her, her wishes. This is the same scene where Jack lies about his name once again to Gwendolen. “Selfishness and servility are the moral alternatives presented” – Katherine Worth. Gwendolen admits she could never love anyone with the name ‘Jack’ for “there is very little music in the name Jack”. This, to the audience seems rather pompous and shallow and is why it is humorous. And after all that Gwendolen has said, Jack does indeed go along with this though, and continues to call himself Ernest.

In the scene where Cecily and Algernon first meet, Algernon also lies about his true identity – he introduces himself as Jack’s brother, Ernest. Whilst Cecily and Algernon are talking in the garden, Jack arrives home. He confides in Miss Prism and Chasuble that his younger brother ‘Ernest’ died in Paris of a severe chill. At this moment in time, the audience are taking great pleasure at the fact that they know something the characters do not – that Jack’s so called brother is in the garden. Afterwards, Cecily confesses to Algernon that they have been engaged for the past three months, and Algernon submissively accepts this to be both true and normal. This is the first indication of who the most assertive figure is in their relationship. The fact that Cecily writes to herself, on the behalf of ‘Ernest’ is rather ridiculous, and once again Algernon goes through with this.

She continues on to tell him when their engagement was broken off, she says “It would hardly have been a really serious engagement if it hadn’t have been broken off at least once. But I forgave you before the week was out” she talks about how their engagement wouldn’t have been ‘serious’, although it had never even happened and this displays marriage to be not all that serious in itself. In reply to this, Algernon thanks her for forgiving him – for something he did not do, “What a perfect angel you are Cecily.” This only highlights that he is inferior to her.

When Cecily and Gwendolen meet each other at Jacks house in the country, a lot of confusion is caused for they both think they are engaged to the same man. But before they stumble across this realisation, they become ‘friends’ instantly Gwendolen says “..Something tells me that we are going to be great friends” to which Cecily replies “How nice have you to like me so much after we have known each other such a comparatively short amount of time.” The girls then find out they are ‘in competition’ with one another and their ‘friendship’ turns sour. This is comical due to the fact that just a few seconds ago they were very friendly and lovely to one another.

When both Jack and Algernon approach and the matter is cleared up that neither one of them is ‘Ernest’ and that they have been lying to the women, Cecily and Gwendolen’s relationship takes a u-turn, not back to friendship, but to sisterhood. This was foreshadowed in Act 1 where Algernon says “Women only call themselves sister when they have called each other a lot of other things first”. Cecily and Gwendolen storm off into the house and Algernon and Jack cowardly hold back, where Algy begins to scoff the muffins and they start to blame one another for what just happened and it takes them a while before they approach the women in the house. However when they do it also doesn’t take long for both women to forgive them, they contradict themselves frequently in the process: Gwendolen – “ But we will not speak first”

Cecily – “Certainly not”
Gwendolen – “Mr Worthing, I have something very particular to ask you. Much depends on your reply.” The irony of the situation is what is so amusing, the women cannot stay silent and wait for the men to speak, once again they have to be in control of the situation. However, the play began in “turmoil but (ended) in harmony” [2] as both couples were happily reunited.

All throughout the play, women like to think they are the leaders and the superior, and on the surface they do appear to be, with their high demands being answered and always leading the conversations in which ever way they wish but at the end of the day, they always forgive or accept only what a man can offer, even if they demanded more.

Gender in 'The Importance of Being Earnest'. (2016, May 11). Retrieved from https://studymoose.com/gender-in-the-importance-of-being-earnest-essay 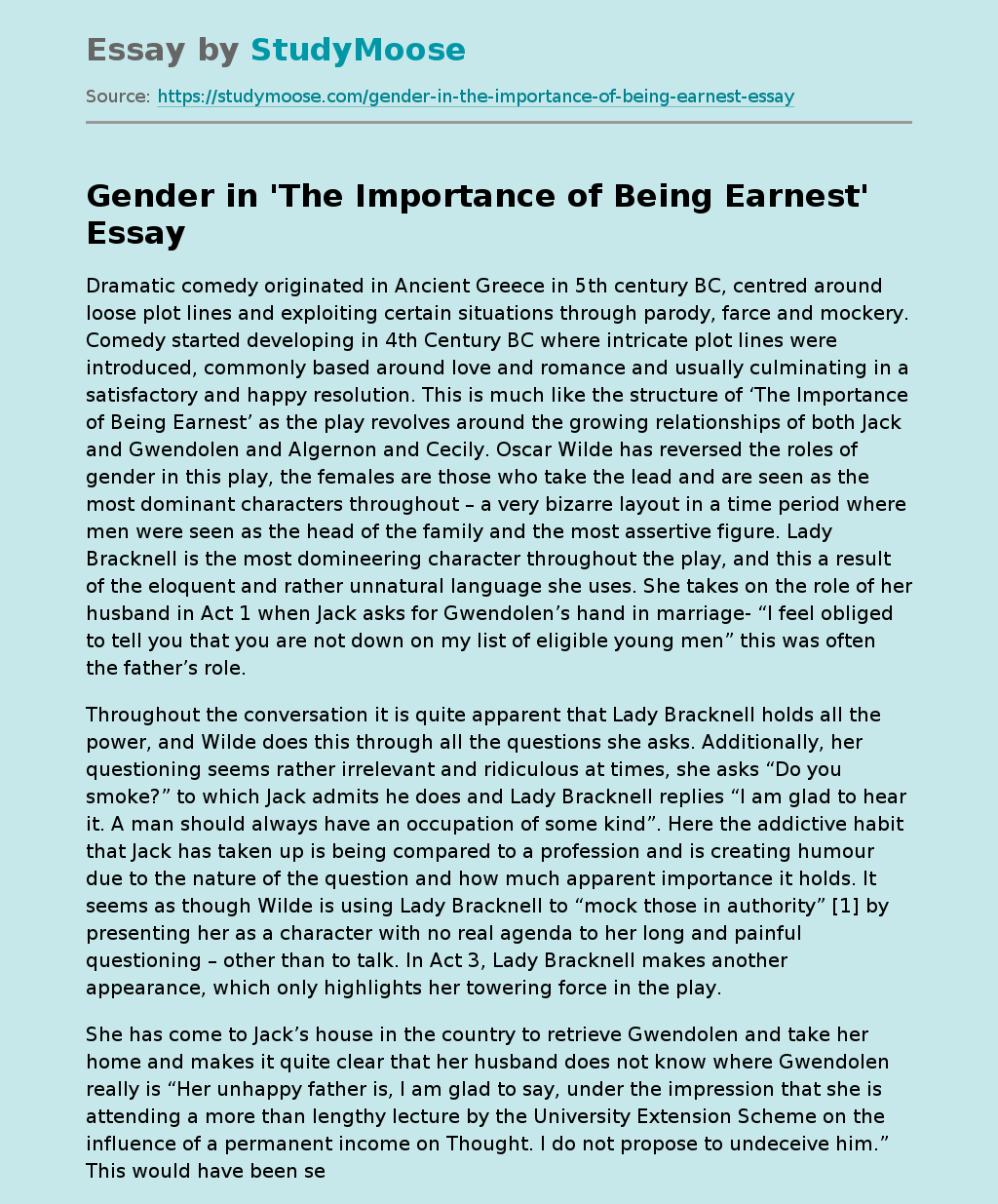