Gender Discrimination in Novel "To Kill a Mockingbird"

Have you ever been blocked from doing something because of things you couldn’t control? In the novel, To Kill a Mockingbird, gender is a big factor in how Scout lives her life. In Scout’s family there is characters that shows expectations to how a girl is “supposed” to act. Harper Lee uses characters Scout, Jem, and other members of her family to show gender barriers and stereotypes.

In the beginning of the novel, you already see Scout start to have bad opinions about being a girl.

Don't use plagiarized sources. Get your custom essay on
“ Gender Discrimination in Novel “To Kill a Mockingbird” ”
Get custom paper
NEW! smart matching with writer

In this instance, the doubts come from Jem. Scout says, “I was not sure, but Jem told me I was being a girl, that girls always imagined things, that’s why other people hated them so, and if I started behaving like one I could just go off and find some to play with” (Lee 41). Scout didn’t want to be a girl because her brother told it as if it was bad to be one.

She didn’t want to play with other girls because of what she’d been taught, and wanted to hang out with her brother. Jem took things that could be bad qualities about a person, and turned it into traits of a girl which deterred Scout from wanting to act like one, creating a stereotype that she believed.

Farther into the book, Jem was growing and started to become distant with Scout, in a sudden matter. He starts bossing Scout around. She says, “After one altercation when Jem hollered, ‘It’s time you started bein’ a girl and acting right!’ I burst into tears and fled to Calpurnia” (Lee 115).

Scout didn’t like being told what to do, especially from her brother. She felt she was already acting right. Being a girl was something she had learned was not a good thing, so Jem telling her to be one, was hurtful to her. However, a couple paragraphs later Scout says, “She seemed glad to see me when I appeared in the kitchen, and by watching her I began to think there wassome skill involved in being a girl” (Lee 115-116). This is the first time we see Scout have a positive outlook on being a girl. By watching someone work that she viewed as a hard-working girl, she changed her mind slightly regarding her views. Calpurnia is portrayed as a strong woman that has a great effect on how Scout feels, even though Calpurnia is simply doing housework.

Later in the book, Scout finds out about some barriers that women face. Her dad tells her, “’For one thing, Miss Maudie can’t serve on a jury because she’s a woman-‘“ (Lee 296). She responds to this with, “’You mean women in Alabama can’t-?’ I was indignant.” Scout had previously been told what she could and could not do, but she always had choices. They were never rules that she had to follow, they were merely “suggestions.” For the first time, Scout was presented with something she couldn’t have control over. She was always discriminated against for her gender, but never to this extent. Her father told her something that she probably would never have considered to be possible. Through this, Scout meets her first solid barrier.

Gender Discrimination in Novel "To Kill a Mockingbird". (2021, Apr 06). Retrieved from https://studymoose.com/gender-discrimination-in-novel-to-kill-a-mockingbird-essay 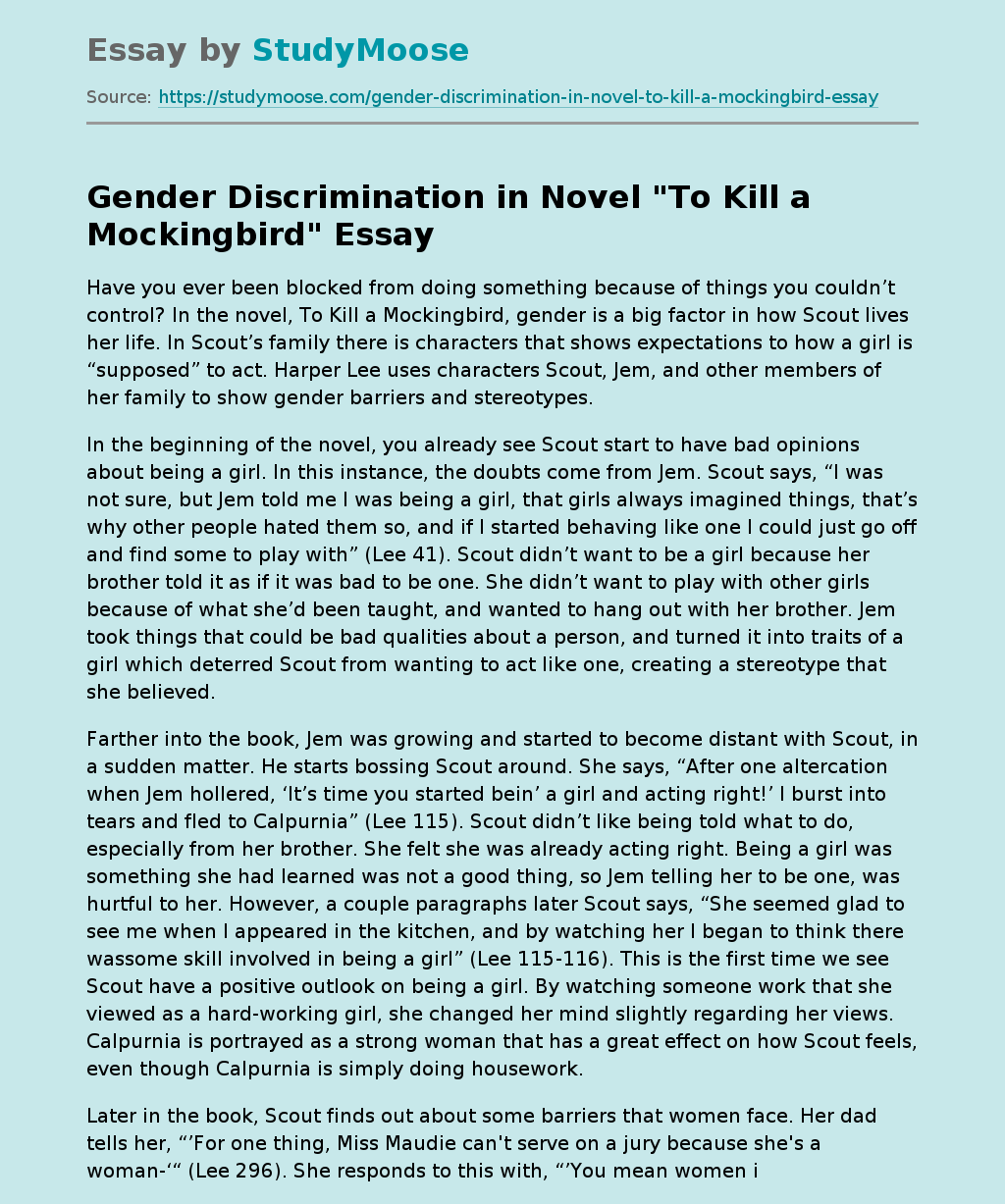