Gender Discrimination Against Women in the Workplace

Traditionally, women have been considered to be the weaker sex and subordinate to men. Moreover, their roles have been assigned to domestic and childrearing duties. The job market is male dominated, and women are often considered to be out of place therein. Women face considerable sexual discrimination in the world of work, significantly limiting their employment prospects and subsequent advancement in their careers.

Women generally find it more difficult than men to acquire a fulltime job. What is more, when they can successfully find work, they often struggle to extend their reaches and advance to higher positions.

Don't use plagiarized sources. Get your custom essay on
“ Gender Discrimination Against Women in the Workplace ”
Get custom paper
NEW! smart matching with writer

The jobs women are granted are very often those with low status and correspondingly lower income. As Harolambos (Sociology: Themes and Perspectives) says,

“Women face a number of disadvantages in paid work. Firstly, they tend to be lower paid than men. Secondly, they are more-likely to be in part-time work. Thirdly, they tend to concentrated in the lower reaches of the occupations in which they work.

Fourthly, women tend to do particular types of jobs, usually those with low status.” In aquiring a job, it must be remembered that more often than not, the employer is male. Men are the ones in the job market with power and authority, and thus make the majority of the decisions – including who gets hired. As Peter Worsley (The New Introducing Sociology) puts it,

“Within the gendered workplace, it is invariably men who are overwhelmingly in positions of power and authority. It is men who, by-and-large, make decisions.

When prospective female employees are being considered for employment, several biases tend to come into play in the minds of the employers. Firstly, male applicants for the job are often given more preference because it is assumed that they have a wife and family to support. In the view of many employers, the role of women as breadwinners is a subordinate one to that of their husband (if she is married). Added to this fact, women lead more complex social lives than that of men. They often must balance their roles as financial providers and child caregivers.

Employers often ask personal questions to female applicants. They aim to obtain background information. This may include her marital status, whether she has any children and their ages, or if she is a single mother. Then they interpret these pieces of information in several, prejudiced lights. For example, if she is married, they assume that her husband is the primary breadwinner and her role will be subordinate.

This puts the female applicant at a disadvantage when compared to a male applicant with a “wife and family to support.” Or they may assume that a single parent mother with a young child may need too much personal time to fulfil her parental roles at the loss to the employer (manifesting as a loss in “man-hours”). Women – both single and married – may even be asked if they intend to have children at a job interview, perhaps informally. And if they say “yes”, thoughts of maternity leave, subsidized childcare and their costs immediately spring in the minds of the employer.

A woman who leaves her job on maternity leave often runs the risk of not having a job to return to.

“Britain for example, has the lowest rate of maternity leave in the European Union. Sixty percent of women in the United States have no adequate access to such leave.” (David Bender and Bruno Leone, 1989)

In Trinidad and Tobago, women had virtually no protection from such discrimination until 2001, when the Maternity Leave Act was passed – guaranteeing that their job would still be available on their return.

Many mothers are at pains to find fulltime work. Their parental demands make it difficult to pursue a fulltime career. Employers often make no provisions for them, as well as women returning from maternity leave, in the way of workplace creche and nursery services. Their part-time status means that they earn significantly less. Ironically, they earn less just at the time when they need more funds to support adequate childcare.

The jobs women are usually able to get tend to be of low status, and low paying.

“Society has made it such that even if a woman wanted to go against the norms and get a job in the work force she would not get very far. About 75 percent of the jobs in the well paying professions are held by men and even if women are able to get equal jobs as men they still get paid considerably less.” (David Bender and Bruno Leone, 1989)

In the professional world, women seem to be trapped in the clerical field, with very few ever reaching managerial positions, even and despite of their having adequate qualifications. In 1950, women composed 30 percent of the workforce. Over 50 years later, this number has increased to 47 percent. Yet, today, women who work full-time, year-round earn 76 cents for every dollar men earn. This is in part due to the limited career options of women compared to that of men, in addition to the usual disparity in pay.

Many jobs are so designed, that their “qualifications” are deterrents to female applicants and favour males. For example, to be a firefighter, you have to pass a strength test – and even if a woman passes, she may still be denied access if she is not of the required height and weight. Thus, such jobs tend to be male oriented. Increasingly however, women are being granted them as old attitudes and norms change. But this has lead to yet another ill – workplace violence against women is on the increase in such careers.

It seems that in traditionally male dominated fields, such as the armed forces and the utilities, women earn less only to suffer more. In 2001, 14,170 lost-time injuries or illnesses resulting from assaults and violent acts on women in the American workplace were reported, whereas men suffered from 9,464. Although women compose 47 percent of the workforce, they suffer 60 percent of these attacks. About 36,500 rapes occur in the workplace annually, approximately 80 percent of which occur against women. In 2001, female fatalities in the American workplace as a result of assaults and violent acts numbered 30.8 percent. Men however, had only a 13.9 percent workplace fatality rate due to assaults and violent acts. Without doubt, women are the ones who suffer more from workplace violence.

Unquestionably, women experience discrimination in the world of work. Although the prospects for improving the current state of affairs may seem bleak, there is hope. As increasing numbers of workingwomen and their supporters lobby for change, those in authority have started listening. The gender disparity in pay is decreasing and women now have a greater range of career opportunities. Progress has been slow. But considering it requires the changing of norms established from the dawn of society, the advancement has been significant. While gender discrimination may exist for quite some time to come, it can be expected to decrease as time goes on.

Gender Discrimination Against Women in the Workplace. (2017, Jan 27). Retrieved from https://studymoose.com/gender-discrimination-against-women-in-the-workplace-essay 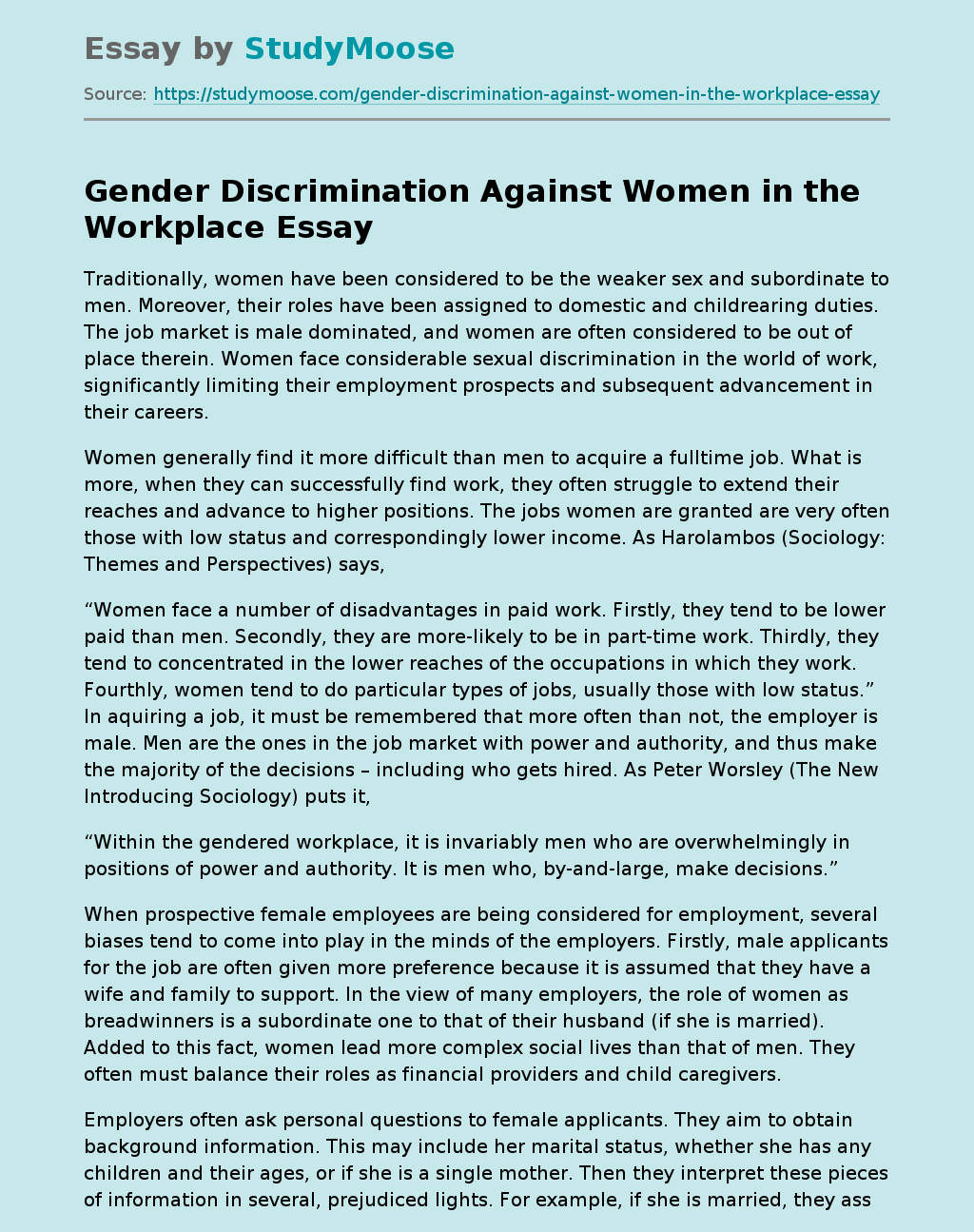