Previous research on memory differences and gender have shown mixed results, most showing no significance in differences. This study examines if there really is any sort of differences, specifically with single digit recall. 1027 participants took a test online. The participants were tested on their recall abilities and memory. The results found that there is a significant difference between men and women in their ability to recall single digits. The p value rested at .024. The mean digit recall for women was 7.

Don't use plagiarized sources. Get your custom essay on
“ Gender Differences: Correlation between Gender and Memory ”
Get custom paper
NEW! smart matching with writer

52 and for men was 7.31. The degrees of freedom was 1025 and the t statistic was 2.261. The p value is well below an alpha level of .05, meaning it is significant and showing that women generally have a higher single digit recall than men do. Through research on the topic, I came to the hypothesis that the study would come as insignificant although it was. My other research suggests overall that there are minimal to no significant differences between men and women involving memory.

The Correlation Between Gender and Single Number Recall

Gender and memory are two common topics in psychology research that, when combined, raise some questions. We ask ourselves if women and men are really the same, but what it comes down to is how our minds work or if we remember things the same ways.

In past research, results have shown that the difference in memory between gender is significant in some respects, but not in others. Research has also shown that when confounding variables were addressed and accounted for, women have excelled in areas where men didn’t…

1). The article Gender differences in cognitive abilities: The mediating role of health state and health habits explains that, in their research, When mediating variables were controlled, gender differences tended to disappear on tests for which there was a male advantage and to magnify on tests for which there was a female advantage” (Jorm et al., 2004). This article follows gender differences involving memory and how people performed relative to their genders. In original testing, men excelled in digit span backwards, but women did in recall. The issue with this is the confounding variables mentioned earlier. The earlier portion of the survey may not be reliable as it doesn’t originally account for these things. Also, the survey was sent in letters which could create bias. People being surveyed

may not respond by letter. Overall, this research proved that really there aren’t many differences between men and women, except that women do better in terms of recall.

In other research on a similar topic, the article Spatial memory in young adults: Gender differences in egocentric and allocentric performance seeks the differences in gender regarding

memory as well. This study found that “men outperformed women on both spatial memory tasks. Women performed better on Allocentric tasks than on Egocentric tasks, whereas men’s scores did not show differences between strategies” (Fernandez-Baizan, Arias, Mendez, 2018). This explains a different type of differences between gender. Gender difference was not significant (which provides an issue with credibility), but this research gives details about the trends they saw. Men tend to be a balance between egocentric and allocentric, meaning they have qualities both self centered and spatially aware.

Women are more allocentric which means they tend to be more spatially understanding than they are self centered, though men surpassed women in both aspects in testing. This study exhibits general differences in spatial memory between men and women in a strongly tested way. Participants were tested by psychologists where they performed egocentric and allocentric memory tests on the participants individually. The tests were elaborate for each type and covered a lot of bases in terms of different types of tests.

When speaking of recall in particular, another study goes into gender differences and sees no significance again. The journal Gender differences in visuospatial working memory performance on recalling object location by Jolie Bell looks into the idea of difference of memory between genders by having participants tested on a computer. Bell used participants who “[had] no known working memory impairments” (Bell, 2017). This can be good because it means the research contains people who would fit the closest to “average” if they don’t have any conditions. The tests concluded that there wasn’t any significant difference between the working memory of participants used.

To understand differences in gender, it is also important to acknowledge if other variables intervene in a study. The journal Memory span: Sources of individual and developmental differences delves into reasons for differences in memory. The quote, “By contrast, there is no conclusive evidence that the other possibilities examined, including those traditionally associated with span differences (rehearsal, grouping, chunking, and overall information-processing capacity), contribute to variations in span” describes that the things people would normally believe to cause differences were not significant in this case (Dempster, 2016). With that said, it opens up the question of what really causes differences between people.

The journal What’s magic about magic numbers? Chunking and data compression in short-term memory by Fabien Mathy and Jacob Feldman goes into questioning these differences between people as well. They discuss chunk capacity and uncompressed item capacity in terms of the basic “magic numbers”. The study results related to this journal show that “The true limit appears to be about 3 or 4 distinct chunks, consistent with many modern studies, but also equivalent to about 7 uncompressed items of typical compressibility, consistent with Miller’s famous magical number” (Mathy, Feldman, 2012). Their intention was to find a more precise way of classifying capacity, but eventually came to similar conclusions people have already come to. This shows that results of a study, if done right, will not differ much from that of other studies.

The final journal discusses visual memory and mentions verbal memory as well. The journal, The capacity of visual working memory for features and conjunctions by Steven Luck and Edward Vogel, mentions that “Although the verbal storage system has been well characterized, the storage capacity of visual working memory has not yet been established for simple, suprathreshold features or for conjunctions of features” (Luck, Vogel, 1997). This basically means that verbal storage was easier to understand than visual, and that visual storage also harder to define. This simply provides a look into what our survey results may give. Visual results may be harder for us to work with instead of verbal.

These studies all provide background for the results of the survey taken of the lab class participants. Memory is thought to be different between men and women in some ways, but most studies come up negative in terms of significance in showing difference. The question to ask as a result of this along with the study is as follows: is there a difference between single digit recall between genders? The hypothesis is that there is no significant difference between the two genders and their ability to recall single digits.

The random participants took the test on the computer and their results were reported.

The significance shows women are generally better at single digit recall than men in terms of this study. Since the results are significant, my hypothesis that the difference would be insignificant is not supported by the data.

Since significance is shown, my hypothesis that there would not be significance in the difference in memory between genders is not supported in this situation. I believe there is a… possibility that a confounding variable could be a response bias. Since so many more women took the test than men (721 women, 306 men), it’s a possibility that women felt more inclined to accept the exam than men for some reason. It may be that women in general were more interested in being a part of the survey.

These results also pose the question ‘Why is this significant and other research was not?’ To me it may have been that the other research had more control over the population of participants they were asking.

I did not expect to see significance here, clearly, since my hypothesis was the complete opposite. In doing this research and while researching topics in similar areas of study, it seemed clear that there are no or little differences between gender when talking about memory. With that said, the results of this study make me question this a bit more regardless.

Personally, I have always thought the sexes have differences mentally, but never really had any information to know better. I still do have belief in this, so I’d like to give credibility to this survey here. With that considered, many other researchers have found the opposite of what this is showing, leading me to believe the results are inaccurate.

After doing this research I really have come to see more about what I’m learning as opposed to what I had already thought. It is important to keep an open mind when reading research journals because I found my mind changed by the end of this research. Despite not finding a similar result to that of the digit span test, my research proved useful on a topic that is very interesting to discuss.

I found it easy for myself to find semi-relevant sources for this research, although there weren’t any directly useful sources. Through my search, though, I found that I learned more in my search for answers than when I originally heard about the digit span test. 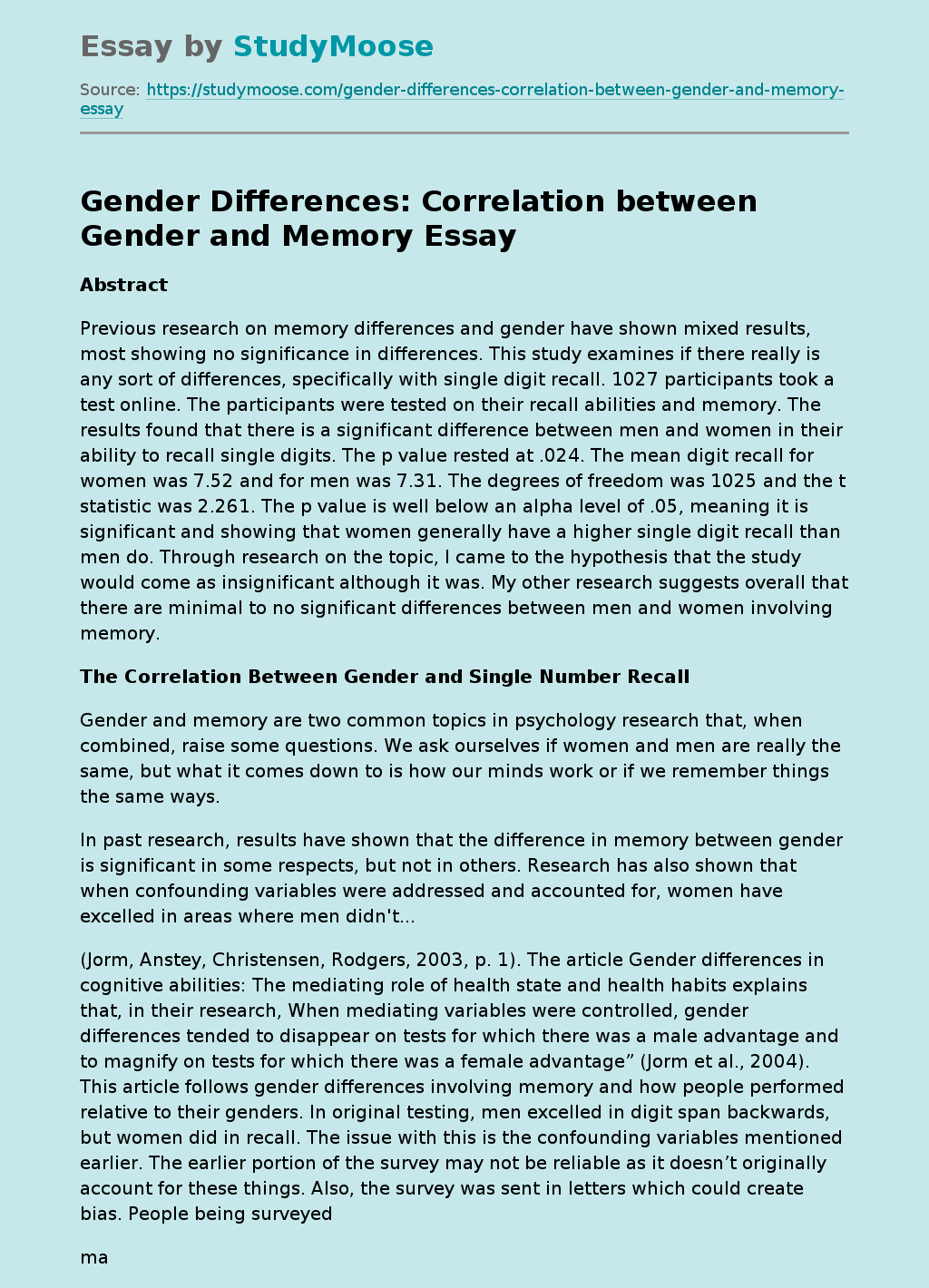