The notion of equality is considered as an inseparable human right which should not be discriminated by religion, gender, race, and ethnicity. Following Burton’s Legal Thesaurus (2007), Gender bias means unequal treatment in job opportunities (such as promotion, pay, advantages, and privileges) and expectations based on worker sex or group of employees’ attitudes. Gender bias can be a lawful foundation for the laws of the lawsuit against anti-discrimination. Gender stereotypes are not a contemporary concept and as such, both males and females have always had constraints and impediments.

Luckily, women, who have once in the past endured unusual weights of segregation, presently have freed jobs in the public arena because of gradually moving frames of mind and qualities but in many places, gender discrimination is still common. Gender bias occurs to both boys and girls but girls are more likely to experience sexual discrimination than boys.

Shakespeare & Underwood (1922), The Merchant of Venice is a play published by William Shakespeare in the 16th century.

The story of this play is about law-related where an enemy of Semitic shipper named Antonio takes an advance from the Jew Shylock to assist his companion. Antonio can’t reimburse the loan, and without humanity and kindness, Shylock demands a pound of his body. The beneficiary Portia, presently the spouse of Antonio’s companion, dresses like the male as an attorney and saves Antonio. So here we can see to be present at court Portia had to dress as a male, so it appears during that period, no one but only men could hold higher positions and words of males were noted but not women.

In my view, she faced discrimination against women and wanted to resist it. Though this story is written a long time back, somehow we can presume that day by day the bias against women will decrease.

At the present, when discrimination of men and women decreases, they are not completely ended because there is another film released on 2017 Secret Superstar directed by Advait Chandan when we see the film, realize that gender bias is still in the society. The film is about a talented young girl Insiya and she is a talented singer who wants to fulfill her musical dream. As she belongs to a very conservative family when Insiya wanted to sing, her father accused her and also Insiyas mother as she supports Insiya. As a result, Insia had to cover her face with Nikab to hide her identity and put her music video achieves fame. Another thing is that Insiya got angry with her mother because she told her to divorce her father as he was a very offensive person but due to the financial problem she didn’t dare to do it. Insiyas grandmother told before Insiya was born her father had wanted to kill her, and how her mother has struggled to keep Insia alive. He has one boy child but he never tried to force his boy to dress like according to him, on the other hand, he forced insiya to wear Burkha as she is a girl. From this story, it can contain a clear picture that some people treat female badly and many people still think women are the burden of the family.

Different countries have different laws about gender discrimination. According to the United States Commission on Civil Rights (1977), Social equality was extended to incorporate separation on the premise of gender. Under this command, the Commission issued in June 1974 a Guide to Federal Laws Prohibiting Sex bias. Before this law, there have been many gender biases in the US for example- we get to know about it through the story of Merchant of Venice in 16th century as I discussed it before. US commission tries to eliminate the gender bias that “Consistent with prohibitions against gender-based differentials announced in the Equal Pay Act (1963) and Title VII of the Civil Rights Act of 1964, Congress stipulated in December 1971 that “all regulations granting benefits to government employees shall provide the same benefits for a married female employee and her spouse and children as are provided for a married male employee and his spouse and children”.

The examination of sex bias in China is especially fascinating a direct result of the apparently opposing impacts of sexual orientation stratification on two periods of that society’s history. From the World Economic Forum’s, we can measures opportunities for male and female between USA and China. In that chart, it has “economic participation and opportunity, educational attainment, health and survival and political empowerment” sections in which China is only improving in political empowerment and USAs position is far better than China. Bauer, Feng, Riley, & Xiaohua (1992), “Women were subordinate to men, and young women occupied the lowest strata of the hierarchy. In many ways, recent developments, especially the efforts by the Communist government since 1949, have challenged this hierarchy” and that is the report of China so that they are working for it. China has different laws regarding gender bias. China Power Project declared economic growth in China has enhanced general prosperity, but these benefits have less benefited Chinese women and women’s labor force involvement was high throughout the 1980s, averaging around 80 percent. By 2018, however, female involvement in the workforce had fallen to 68.6%, only slightly greater than the US (66.1%).

In the past, people thought that teaching woman was a waste of money because they will go to someone else’s house after their marriage so they don’t need any kind of education. They were not allowed to go any institution to gain knowledge but educated people are working for female education and to remove bias, still, there is a lot of discrimination after female awareness in the field of education this is also happening in most of the countries at present. On the hand, the number of victims of sexual harassment of girls is quite higher than boys. Girls have to face harassment in the office, roads everywhere. People judge girls by their way of walking and talking. Actually, our society and culture itself formed differences between men and women such as- sometimes the society forces women to follow their rules like being a Muslim family you have to wear the scarf and cover your hair. They don’t want to hear a female opinion they just force female to do it. They create many insignificant rules like women should talk slowly and politely. They have to work at home and cook for their husband and child they don’t need to work outside their husband will do it for them. Whatever men want they should obey their words. In job sectors, if women are more educated than men, they still earn less than men also they feel hesitate to ask for higher pay and have to compromise. There is the absence of female good examples in the working environment.

We are at a time where gender bias considered as an unlawful, however despite everything we have far to go. To eliminate gender bias we should improve leadership skills among the girls and make them self confidence. It will help girls to raise their voice if anything wrong happen and also they can speak out for equality and decrease the bias which is happening daily in their lives. We should explain to everyone that everyone has equal rights to live their life continue in their own way so they can know that it is harmful and wrong to grab the human rights of others. We have to work for a girl’s education and increase it. In the event, if you can’t help contradicting another person’s supposition, react usefully instead of giving an antagonistic reaction that may prevent this individual from voicing their sentiment once more that will help to prevent bias. Sometimes unconsciously people create bias so we should think before we talk something. The wrong assumption is a bad thing, we cannot make our own thoughts about them because it creates unconscious bias. The government should also take the necessary step to reduce gender bias by creating social awareness and organize seminar programs about bias which the main purpose will be given knowledge to people how bias can happen and how it harms anyone mental health.

Inclination has commonly conflicted with women. As a girl myself, I have been experienced and faced it so many times like one day my brother and his friends were playing a game and all of a sudden his one friend started arguing with a simple matter. Suddenly my brother said, “Stop being such a girl”. At that time I did not think so much about that matter but now I think, why did he say that? Because being a girl is awful? Again sometimes when I do a tough job, my mother said, “You are not my daughter, you are my son” so here a patriarchal strengthening ironically used as a complement to a girl who made her parents proud by doing well. What does it mean that girls cannot work hard? If they did, they will be recognized by a boy? Is not it discrimination? There are various stories where women did not respect other women it is not that men only have to respect women. Women too should respect other women. If a girl child born in someplace they express grief. Also, some women had to face threatened and tortured from their mother in law or from their husband to go for an abortion because she was carrying a girl so women too need to respect other women and understand the value of a girl child. We all are human but why are so much discrimination?

In conclusion, Gender equality is still an allegory that seems to continue for an unforeseeable time, as it is little or no effort visible in our society that co drastically improve the situation or condition of women’s plight. All things considered, sex balance is certifiably not a lady’s issue, it’s a human issue. Gender bias influences all of us. What I needed to state is that mistreatment has no bias, it’s not gendered explicit, and it’s simply never alright. Although women right have been discussed more worldwide and also we are concerning about women but for the girls to give rights, many times boys are subjected to discrimination. However, if all nations combine their efforts and work on improving gender equality, then there is a silver lining of hope. 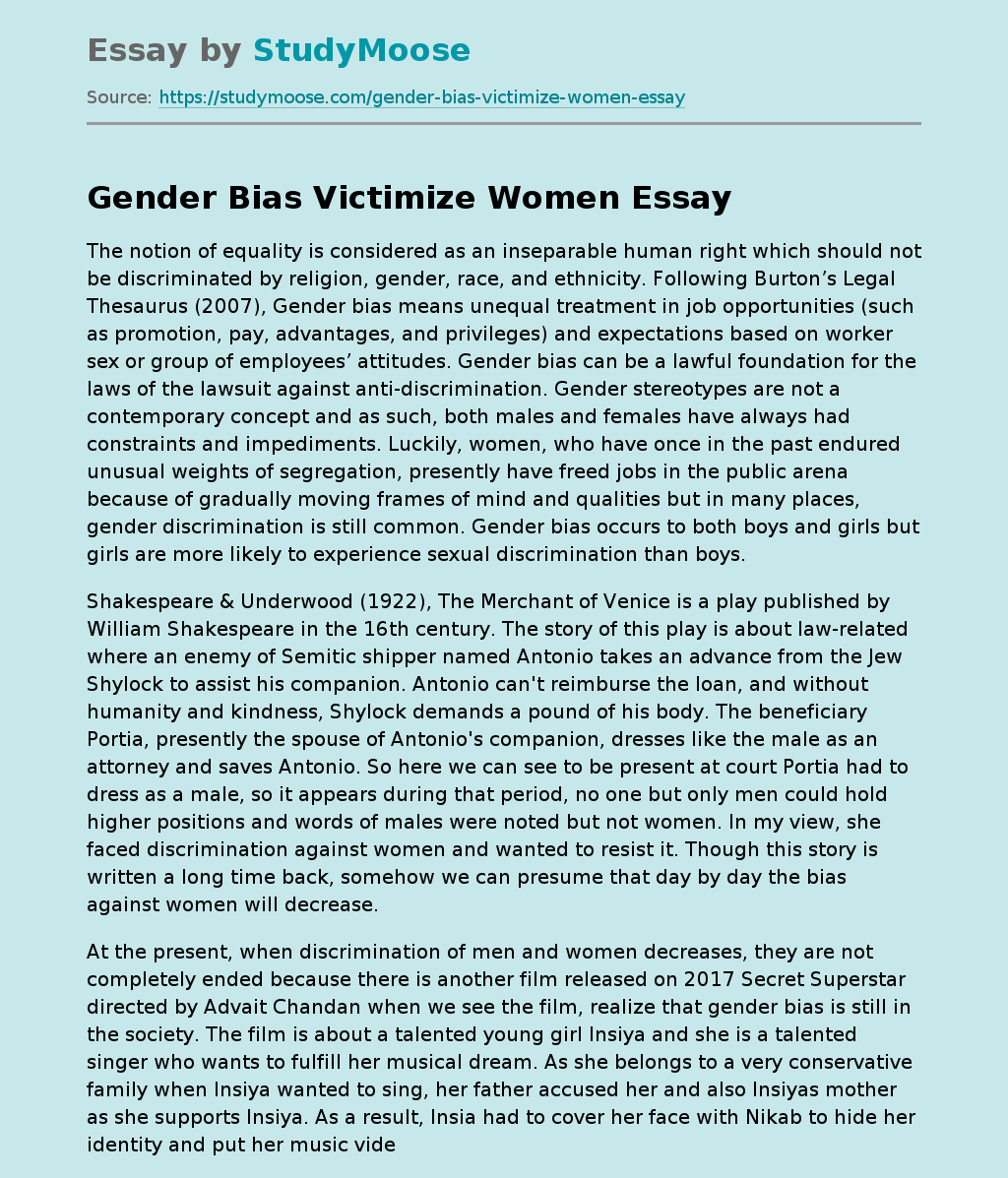