‘Treasure Island is a ‘rites of passage’ novel that tells of Jim Hawkins’ spiritual and psychological growth from child like innocence to an experienced, wise young man. The Theme of this novel is the development of the central character Jim from childhood to maturity. Jim Hawkins is a curious, resilient and volatile boy. The writer portrays him as volatile through his spontaneous and often non-thinking approach to situations. The reader sees this when Jim jumps ashore with the pirates or runs off to capture the Hispaniola.

The writer does this because it keeps the plot flowing, and adds a dimension of unpredictability. The condition of the time the writer is writing about demand Jim to be resilient in the face of it all. Enormous pressure is put on Jim early in the novel, when his father falls ill. Jim at a young age of probably twelve is now running the “Admiral Benbow”. But at the time that this is being written about this is not unheard of.

Shorter life spans meant that children where put to work much earlier and Jim would have already been quite experienced in the work place.

In the absence of Jim’s father, he looks towards new role models. I believe that to begin with Jim does in some ways respect Captain Bones as he does fear him, ‘This, when it was brought to him, he drank slowly, like a connoisseur, lingering on the taste, and still looking about him at the cliffs and up at our signboard.

‘ The writer writes of Jim’s admiration of the Captain in a very subtle way, as an indication to its lesser significance to the novel. Far more does Jim look up to Dr Livesey; Jim is full of admiration for the heroics in the face of Billy Bones.

So much so that upon escaping Blind Pew, Jim goes to the Doctor as though he is the obvious solution to the problem. The writer writes in first person and direct speech that gives the novel a diary form. The writer does this because it gives the reader the story from Jim’s point of view. Jim often shows signs of great bravery, and it’s that bravery in the face of the pirates in the Admiral Benbow that leads him to Long John Silver. Long John is incredibly charismatic, and immediately upon meeting Jim, starts playing psychological games, ‘I see you’re our new cabin-boy; pleased I am to see you’.

This makes Jim feel self-important and he takes a liking to Silver. Silver is a master of Psychology, he has the Squire totally fooled and even Dr Livesey is taken in. The writer does this to take in the reader, convince the reader of Silver’s honesty and adds to dramatic dimension of the revelation to Jim that he is a pirate. However in doing this the writer is opening up a totally different suspense for the more experienced reader, who has suspicions about Silver and picks up on the writer’s signposts towards the truth.

I think the lack of a father figure for Jim when he meets Silver is important. Jim wants to believe that he is someone he can trust. In the apple barrel Jim discovers the true nature of Long John Silver. The writer also reveals a crucial theme of the novel, greed. ‘I want their pickles and wines and that’. Greed is what has driven the pirates to plot of mutiny, and ironically greed is also why Jim, the Doctor, the Captain and the Squire are driven to the Island. In this chapter the pirate use colloquial language that Jim is guesses at it to interpret what is being said. By a ‘gentlemen of fortune’ they plainly meant neither more nor less than a common pirate’. ‘Barbeque: how long are we a-going to stand off an on like a blessed burn boat? ‘ the writer writes in this way to distant Jim and the honest characters from the pirates. Jim is overcome by fear and loathing for Long John and the thought of striking him down through the barrel crosses his mind. After the horrific death of Tom Jim shows his weak childlike self and faints. The writer is portraying a moment in which innocence is lost.

When Jim encounters Israel Hands on the Hispaniola Jim is a wiser man, he know more about adults and no to trust them. The reader sees this when Jim does not fall for Hands’ ploy. In stead we see a wiser Jim, who is in control of the situation, and does not panic or act rashly. On the Hispaniola Jim and Israel explore the theme of afterlife and the cost of human life. Israel Hands talks of death and murder as matter of fact, still Jim is fearless in the face of this cold murderer. When Jim comes to kill Hands, it is almost the final rite of passage.

Nobody can now accuse Jim of innocence. In the face of the pirates and being abandoned and betrayed by those he has done great service, he remains honourable and noble to his principles. The speech he delivers to the pirates is brave in the extreme. At the end of the story Jim has completed his ‘rite of passage’. Throughout his experience he has refused to give in to greed and piracy, he stayed true to his course. Now he is a mature experienced young adult, whereas at the beginning of the novel he was a young boy being trodden on by the world. 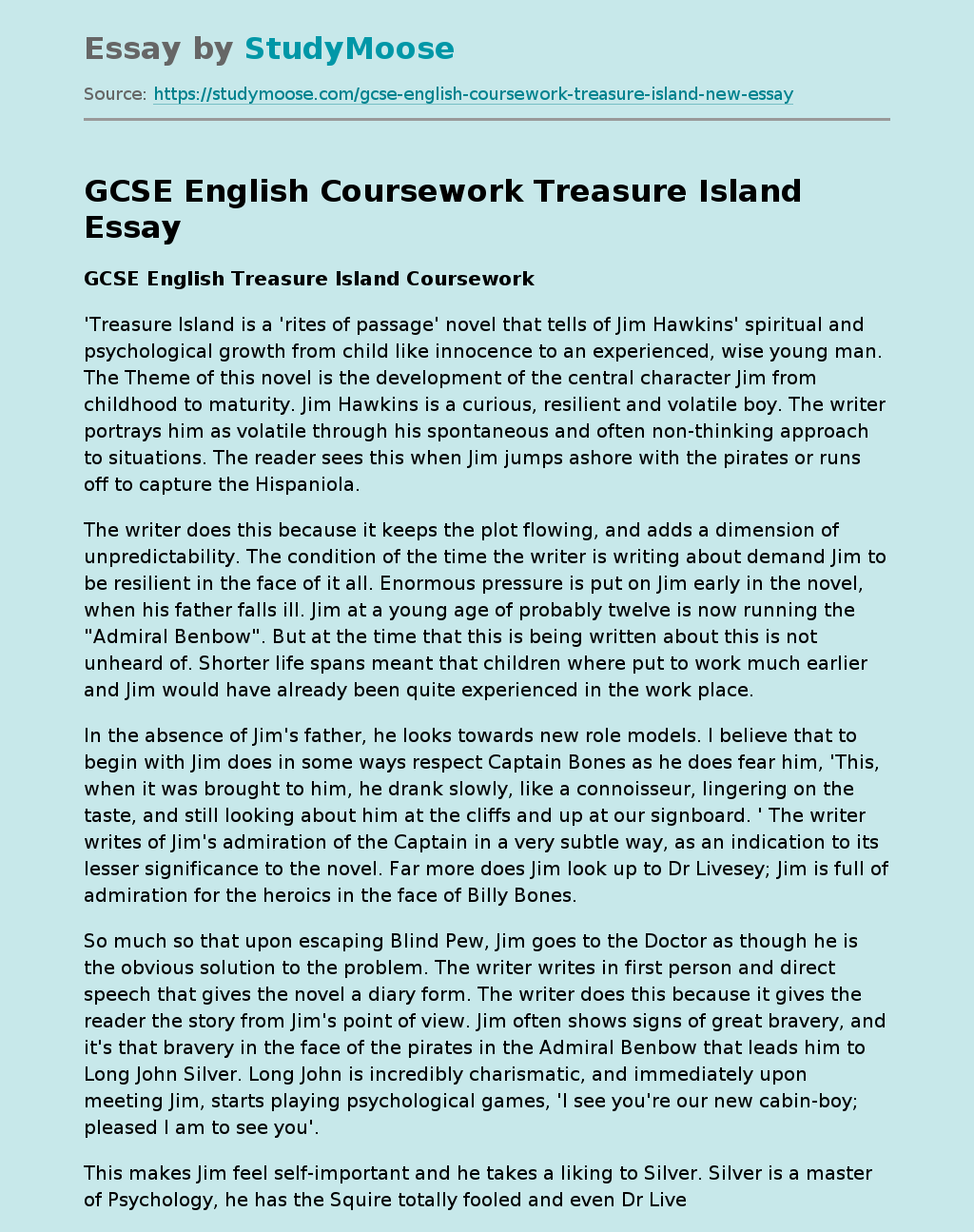