Gay Marriages: For or Against

Marriage sits squarely at the intersection of religion, law and society. Opponents of gay marriage fear allowing same-sex couples to marry arguing that it will lessen the validity of heterosexual marriage; however, same-sex marriage should be supported and respected nationwide because same-sex couples should be granted the same rights, privileges and responsibilities, no matter their genders; additionally, marriage is a human right and should be honored.

People do not choose their sexual orientation neither do they learn about romantic feelings, we discover them.

Don't use plagiarized sources. Get your custom essay on
“ Gay Marriages: For or Against ”
Get custom paper
NEW! smart matching with writer

I strongly believe that if someone loves each other and wishes to commit to each other through marriage they should have that right and it should be respected by everyone even if there are people who disagree on it. One of the strongest proponents supporting the same values of beliefs as mine is the organization FREEDOM TO MARRY who continues to make a difference by bringing awareness to people that everyone, non-gays and gays share the same values of wanting to protect their loved ones and wish to protect their right to commit to the person they love regardless of gender.

Freedom to Marry fought long and hard for the equality of marriage, a fundamental right everyone should have regardless of who they love and should not be discriminated against core values and beliefs I strongly believe in and support.

The most often heard case against same-sex marriage is that marriage is an institution between a man and woman. Society would collapse if they saw it any different since traditionally ‘it has always been’ defined as a man-woman legal union.

Yet, this argument proves weak essentially because here, in the United States, the Supreme Court affirms that marriage is a basic civil right, infringing such a right would go against the Constitution. As for the religious dispute, it is true that the bible does classify homosexuality as an ‘abomination,’ noted as the worst category of a sin therefore people should not support/ recognize homosexual relationships. How often than not do you hear such a lame argument? Fundamentally the U.S. was formed on the ideals that our rights as humans be freely expressed without fear of government or religious persecution. The First Amendment declares protection over certain rights which are the freedom of speech, press, expression, to petition the Government for a redress of grievances, and finally the freedom of religion. Religion views homosexuality as very immoral, in the United States religion is exercised freely because it is protected by the amendment, but freedom of religion also implies the right to freedom from religion as well. Meaning that the Bible, or any other religion against same-sex-union, has absolutely no standing in American law. Compared to heterosexual marriages, those who argue that marriage is for the purpose of procreation forget that it never was primarily for the conception and raising of children. There are even married heterosexual couples who decide not to have children.

If I were to speak to someone who opposed same-sex marriage I’d make sure to listen to their side and ask them where their views are coming from whether they grew up with that view in their family life or their environment shaped their views. My argument to someone who opposes same-sex marriage would involve telling them that it is a human right that provides same-sex couples the acknowledgement of commitment to their loved one with the proper status and benefits heterosexual marriages have. I would then try to see if the person views same-sex marriage in an emotional or rational light. Those who go against it are taking away a right that is not meant to be granted by anyone, it is something we are born with the right to have. It is wrong to deny Same-sex couples access to this country’s defining institutions just because they love each other, in other words they deny them their right to pursuit of happiness. Same-sex couples, like any other person in this nation wish to find and obtain happiness along with the support of a partner no matter their gender.

Gay Marriages: For or Against. (2021, Mar 18). Retrieved from https://studymoose.com/gay-marriages-for-or-against-essay 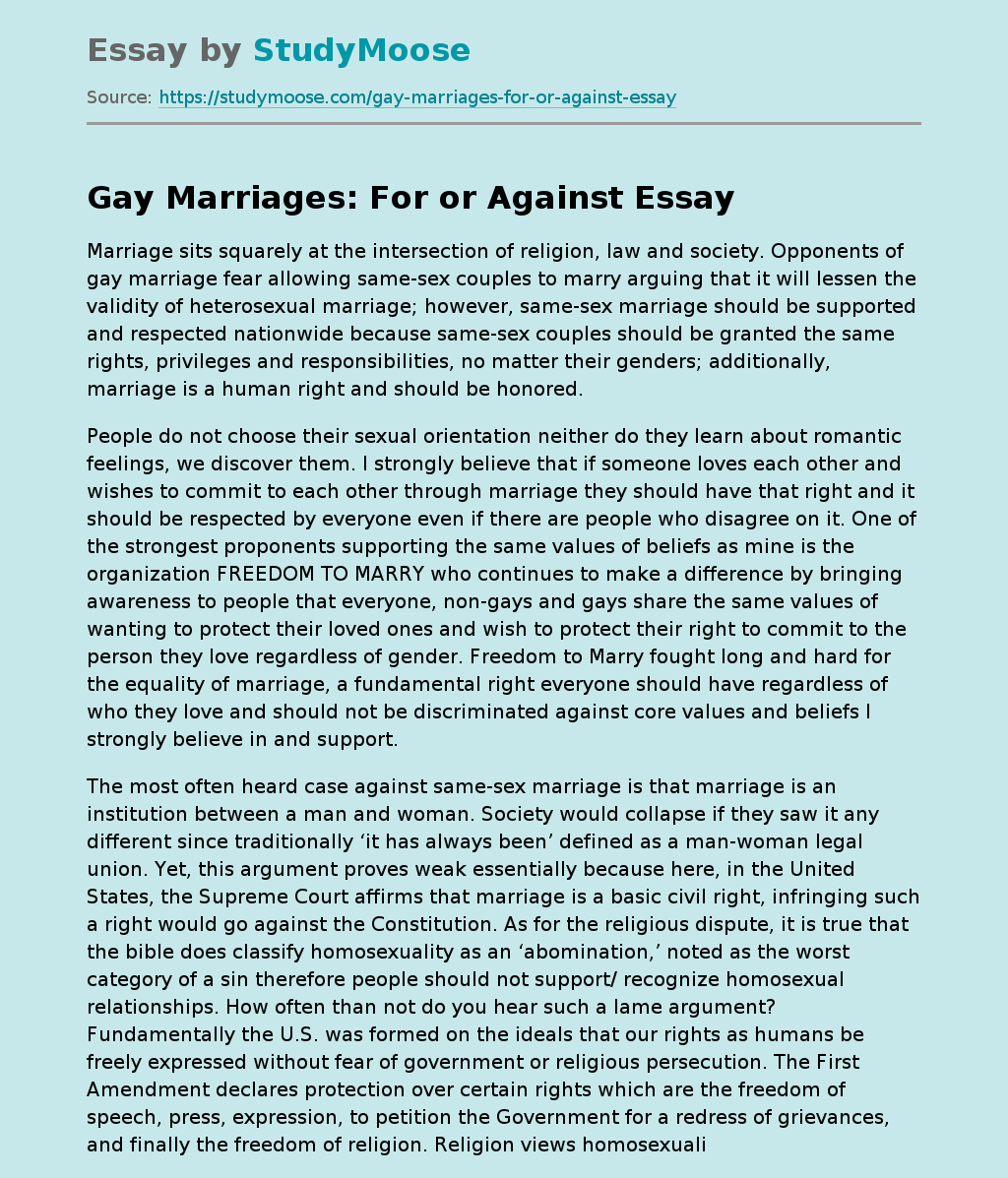