Although the distopias of Orwell’s Oceania and Niccol’s not to distant American city are in many ways similar in the sense of totalitarianism. The systems of control are quit different. Orwell’s world seems to be an overbearing socialist police state where as, the world in Gattaca is almost total control by science. The two pieces were written decades apart from one another, but both the film and the novel send a clear message; to enjoy the social mobility and freedoms of modern life and to be aware of how fragile they are.

Don't use plagiarized sources. Get your custom essay on
“ Gattaca and Orwell’s 1984 compared ”
Get custom paper
NEW! smart matching with writer

Both Orwell’s and Niccol’s worlds are dependant upon a class or cast system to divide the powers and freedoms of the people in their respective worlds. Oceania as far as we can tell has three maybe four classes. The Proles are the group of people who hold the worst of the jobs within Oceania. They work as laborers and as prostitutes but their idle time is spent like many undergrads in the modern world; listening to music, drinking beer, and fornicating.

The second and arguably the lowliest of Orwell’s classes is the outer party, to which our main character Winston is a member. The outer party is subjected to all the evils of the inner party. Their inner most personal thoughts and feelings are monitored by the thought police and even the slightest inclination of disloyalty is punished by being vaporized.

They work mostly as desk jockeys, and their free time is to be spent doing activities for the party.

The inner party is closely related to an upper management class within a perverted militant socialist world where all business is run by the state. Compared to the outer party the inner party does seem to enjoy a few more modern comforts but, they are still being subjected to tellascreens and thought police. Arguably the fourth class would only consist of one man a ruling dictator who goes by the name of Big Brother his existence is questionable but if he were to exist it is presumable that he would enjoy every possible comfort.

Gattaca has a class system as well but, it is a much simpler one controlled by science. Depending upon Gene manipulation a citizen is either a valid or they are an invalid. The days discrimination because of race, religion, or sexuality are gone, in this world all that matters is the results of a blood test. The lead character portrayed by Ethan Hawk is Vincent/Jerome Morrow. He is what they call a faith birth, his parents conceived him in the traditional way, in the back of a Chevy Rivera. At his birth he did have ten fingers and ten toes but now that’s not all that mattered.

These two very rigid and well structured societies whose purpose was to create order over universal individual freedoms for its citizens freewill was not something that was desired. What Vincent and Winston have in common his that they used their freewill and determinations to resist the status quo. 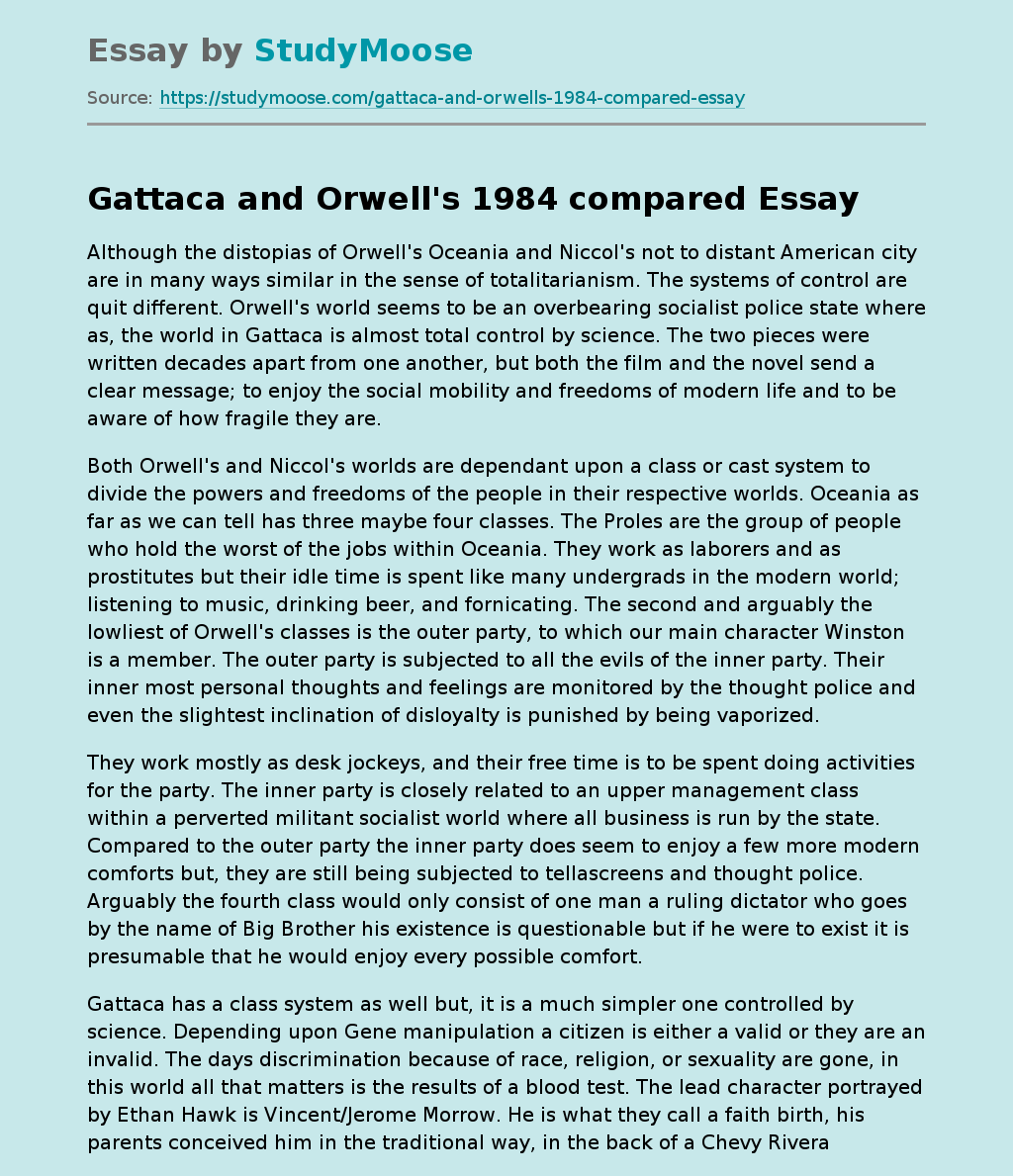