The narrator is a narrative device that both authors use in their presentation of both Gatsby and Heathcliff. Having a narrator means that that character must be present in a particular circumstance for us to learn of it. Examples from the novels are where Gatsby and Daisy insist Nick stays when Daisy is shown round Gatsby’s mansion: ‘I tried to go then but they wouldn’t hear of it’ because if Nick departed then there we would not learn of the reunion of the former lovers.

Don't use plagiarized sources. Get your custom essay on
“ Gatsby and Tom Fitzgerald’s Novel ”
Get custom paper
NEW! smart matching with writer

Also Nelly is present, or is told of, all major events in the novel, so allowing us to learn of them through her.

A contrast in the author’s presentation of Heathcliff and Gatsby is that Fitzgerald’s narrator is from a much higher echelon of society than Nelly, this probably being a result of the fact that a servant would never learn what Nick, as a close friend, learns of Gatsby as this would require a breach of tacit class rules established at this period of time.

Wuthering Heights, on the other hand, is seemingly outside society and there are no such taboo’s to prohibit interaction between servants and members of higher classes.

In comparison, both authors choose, as part of their presentation of Gatsby and Heathcliff, to have the narrators tell their tales retrospectively. In the case of ‘Wuthering Heights’ however, the inclusion of two narrators means that there are shifts from past to present, although the bulk of the story is told with Nelly recounting it to Lockwood.

We are informed by Fitzgerald at the start of the novel that Nick ‘came back from the east last autumn’. Fitzgerald also tells us, through Nick, that ‘Gatsby turned out alright at the end’ which could be though of as ironic considering that ‘at the end’ he is shot by a grief-stricken Wilson.

The presenting of the stories in this way further adds to the impression of realism in the novels, as if what we are being told actually happened and the narrators are reliving and judging what occurred in their retelling. In ‘Wuthering Heights’ Bronte uses setting in her character presentation. Heathcliff’s nature and personality is symbolised in the landscape in which he resides. Wuthering Heights is a lonely, haunted place, isolated from society. Heathcliff, especially when we first encounter him, is regarded by Lockwood as his ‘solitary neighbour’ and Wuthering Heights itself described as a ‘misanthropist’s heaven’.

Wuthering Heights is also used by Bronte to symbolise a change in mood at the close of the novel. It is filled with love and the weather ‘sweet and warm’. This representing the new love between Hareton and Catherine and also the peace and tranquillity experienced by Heathcliff in the final days leading up to his death. As the novel progresses we also learn that Heathcliff is haunted by the memory of his one true love, his ‘heart’s darling’, Cathy, who ultimately proves to be the death of him.

With the inclusion of Cathy’s haunting of Heathcliff, Bronte drew upon the eighteenth century idea of Gothicism, that of ghosts and the paranormal and their influence on the living; a similarity between the two authors being that they both drew upon ideas of their time. Fitzgerald including jazz age influences in his novel. He also drew upon the experiences of his life, in particular the continuous and ostentatious parties that he attended- Gatsby could in fact be thought of as being autobiographically representative of parts of Fitzgerald’s life.

Bronte uses the dramatic device of pathetic fallacy to reflect both Wuthering Heights and Heathcliff’s nature. Upon Lockwood’s second visit he was met with a ‘bitter whirl of wind and suffocating snow’ which prevents his return to Thrushcross Grange, isolating him at the Heights and from the rest of society which adds to the impression of loneliness and self-imposed isolation associated with Heathcliff. The cold, harsh weather also reflects those similar wild and brutal traits in Heathcliff’s temperament. Both Fitzgerald and Bronte create settings that are defined by its absence of women.

Wuthering Heights is full of the intense longing and yearning of Heathcliff for Cathy; this reinforced by the supernatural visitation of Cathy’s ghost to Lockwood resulting in a ‘gush of grief’ from Heathcliff. This ‘gush’ is seen to be poignant in Heathcliff’s presentation as he is usually perceived to be an emotionally distant character and represents the degree of loss experienced by him. In ‘The Great Gatsby’, Gatsby’s house is defined in its lack of Daisy and the very fact that it is completely engineered to bring her closer to him – the lights, the parties, even the ‘beautiful shirts’.

The extent of Gatsby’s feelings towards Daisy is shown when Nick says: ‘I think he revalued everything in his house according to the measure of response it drew from her well-loved eyes. ‘ This demonstrating the point that everything Gatsby possesses is for Daisy and that he values her judgement far above his own. Daisy recognises this and is driven to ‘cry stormily’ by the very fact. Fitzgerald also uses setting in his presentation of Gatsby.

He uses the dividing river between Gatsby’s mansion and Daisy’s residence to be symbolic of a barrier between them, foreboding of the fact that they will never truly be together or return to what they had five years previously. Alternatively, it could be seen as the extent and closeness to which Gatsby has come in his pursuit of Daisy – the divide of water narrowed from the entire Atlantic Ocean when he was fighting in the war to a narrow strip of river now. Fitzgerald uses light as a symbol throughout his novel. The ‘single green light’ at Daisy’s being a beacon towards which Gatsby ‘stretched out his arms.

‘ An image of mystery to us when we first perceive it, but is later recognised to possess a great significance in the expression of intense longing and devotion by Gatsby. Later on in the novel Gatsby creates a signal of his own when he sets the ‘whole corner of the peninsula… blazing with light. ‘ His intention being most probably to subconsciously attract Daisy to him like a ‘moth’. Gatsby’s house is also used by Fitzgerald in a similar fashion to Bronte – to demonstrate a complete change in mood at the close of the novel. The house is seen to be empty, both of purpose and of Daisy.

Without Daisy, and with Gatsby’s death, the house loses all significance. This emptiness is retrospectively emphasised with the reader’s memory of Gatsby’s vast parties. It is also partially due to the emptiness that we fully realise the ‘colossal nature of his dreams’. The size of the house is symbolic of the size of his dream and also of just how far he came in his pursuit of Daisy. Its emptiness is also representative of the fact that Daisy moved on, whilst Gatsby didn’t. It could therefore be argued that he was destined to face tragedy as Daisy could never live up to the faultless, perfect model Gatsby constructed in his mind.

Fitzgerald, in a similar fashion to Bronte, uses Pathetic fallacy; although his use is more to create atmosphere rather than posit character traits. At the reunion of Gatsby and Daisy in Nick’s ramshackle house, the rain prior to the meeting and the subsequent change of weather to sunshine highlights the trepidation experienced beforehand and the jubilation afterwards where Gatsby ‘literally glowed’. The central romantic image of the novel, where Gatsby kisses Daisy on a night ‘white with moonlight,’ is another example of pathetic fallacy. The white here symbolising the purity of Gatsby’s love for Daisy.

The ‘broiling’ day of the confrontation between Gatsby and Tom is a further use of pathetic fallacy, where the stifling heat creates a tense atmosphere for the suppressed emotions held to break free. Both Fitzgerald and Bronte use contrast with other characters in their presentation of Gatsby and Heathcliff. In Fitzgerald’s ‘The Great Gatsby’ the evident contrast is between Gatsby and Tom Buchanan; two very different men whose only thing in common is their love for Daisy, although this is doubtful in the case of Tom because of his promiscuity. 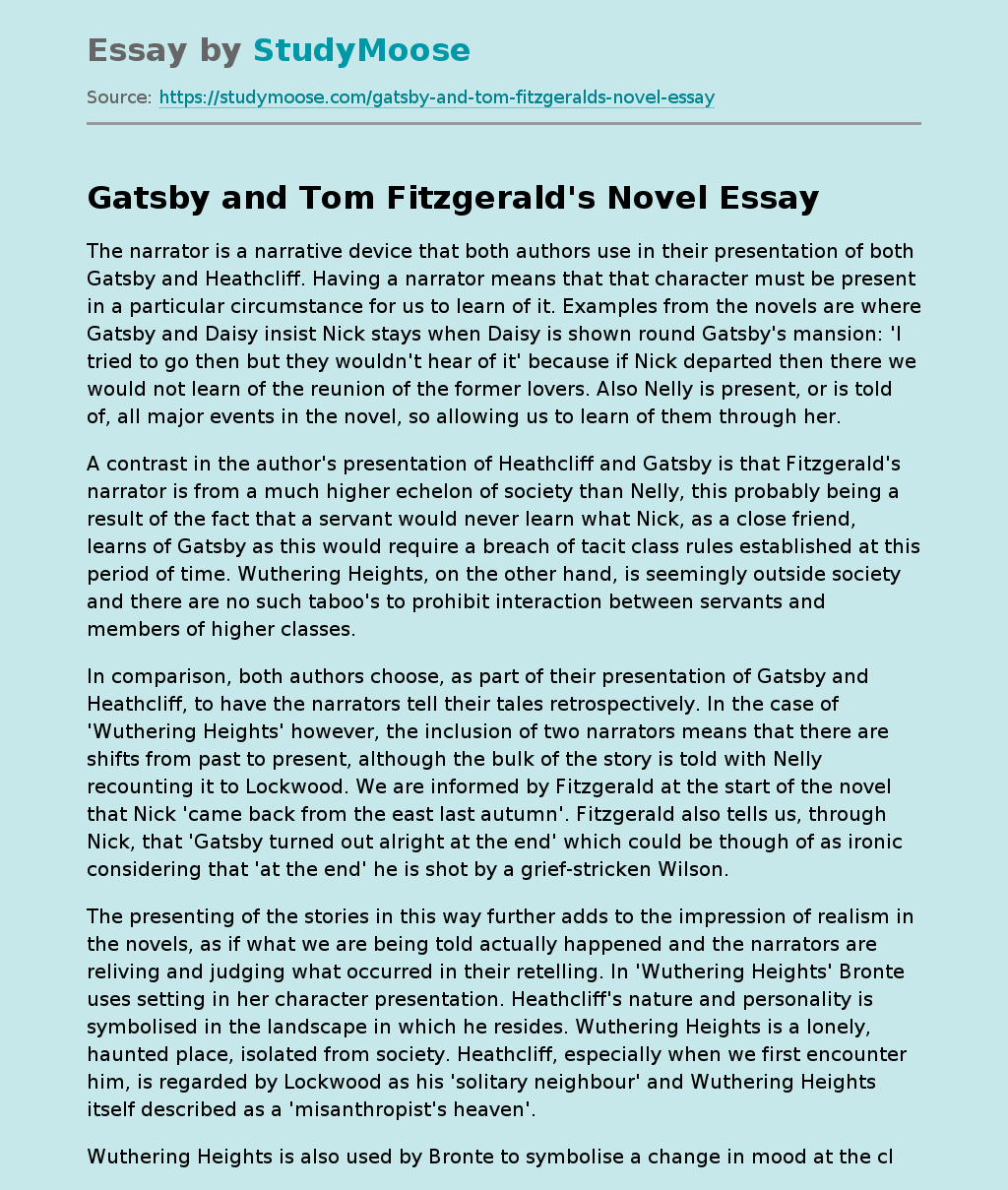