The Great Pacific Garbage Patch is a collection of marine debris in the North Pacific Ocean. Marine debris is litter that ends up in oceans, seas, and other large bodies of water.

Don't use plagiarized sources. Get your custom essay on
“ Garbage Reduction in The Great Pacific Garbage Patch ”
Get custom paper
NEW! smart matching with writer

These areas of spinning debris are linked together by the North Pacific Subtropical Convergence Zone, located a few hundred kilometers north of Hawaii. This convergence zone is where warm water from the South Pacific meets up with cooler water from the Arctic. The zone acts like a highway that moves debris from one patch to another.

The entire Great Pacific Garbage Patch is bounded by the North Pacific Subtropical Gyre. An ocean gyre is a system of circular ocean currents formed by the Earth’s wind patterns and the forces created by the rotation of the planet.

The area in the center of a gyre tends to be very calm and stable. The circular motion of the gyre draws debris into this stable center, where it becomes trapped. A plastic water bottle discarded off the coast of California, for instance, takes the California Current south toward Mexico.

There, it may catch the North Equatorial Current, which crosses the vast Pacific. Near the coast of Japan, the bottle may travel north on the powerful Kuroshiro Current. Finally, the bottle travels westward on the North Pacific Current. The gently rolling vortexes of the Eastern and Western Garbage Patches gradually draw in the bottle.

The amount of debris in the Great Pacific Garbage Patch accumulates because much of it is not biodegradable. Many plastics, for instance, do not wear down; they simply break into tinier and tinier pieces.

For many people, the idea of a “garbage patch” conjures up images of an island of trash floating on the ocean. In reality, these patches are almost entirely made up of tiny bits of plastic, called microplastics. Microplastics can’t always be seen by the naked eye. Even satellite imagery doesn’t show a giant patch of garbage. The microplastics of the Great Pacific Garbage Patch can simply make the water look like a cloudy soup. This soup is intermixed with larger items, such as fishing gear and shoes.

The seafloor beneath the Great Pacific Garbage Patch may also be an underwater trash heap. Oceanographers and ecologists recently discovered that about 70% of marine debris actually sinks to the bottom of the ocean.

While oceanographers and climatologists predicted the existence of the Great Pacific Garbage Patch, it was a racing boat captain by the name of Charles Moore who actually discovered the trash vortex. Moore was sailing from Hawaii to California after competing in a yachting race. Crossing the North Pacific Subtropical Gyre, Moore and his crew noticed millions of pieces of plastic surrounding his ship.

Garbage Island will likely double in size in the next ten years according Charles Moore (scientist).

If you are new to the subject, the following summary is made for you

Cleaning up marine debris is not as easy as it sounds. Many microplastics are the same size as small sea animals, so nets designed to scoop up trash would catch these creatures as well. Even if we could design nets that would just catch garbage, the size of the oceans makes this job far too time-consuming to consider. The National Ocean and Atmospheric Administration’s Marine Debris Program has estimated that it would take 67 ships one year to clean up less than one percent of the North Pacific Ocean.

Scientists and explorers agree that limiting or eliminating our use of disposable plastics and increasing our use of biodegradable resources will be the best way to clean up the Great Pacific Garbage Patch. Organizations such as the Plastic Pollution Coalition and the Plastic Oceans Foundation are using social media and direct action campaigns to support individuals, manufacturers, and businesses in their transition from toxic, disposable plastics to biodegradable or reusable materials. 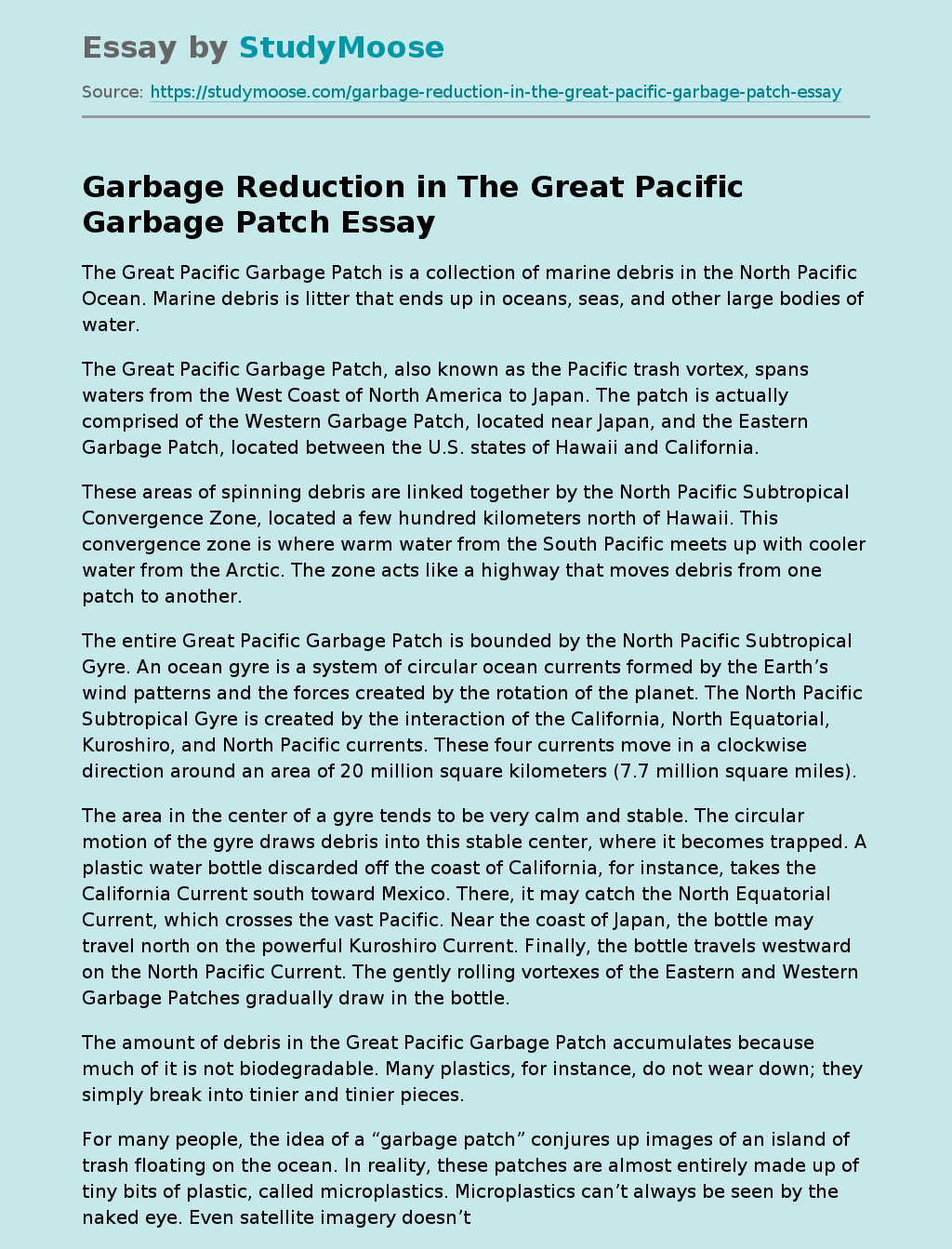