Dramas are serious, plot-driven presentations, portraying realistic characters, settings, life situations, and stories involving intense character development and interaction. Usually, they are not focused on special-effects, comedy, or action, Dramatic films are probably the largest film genre, with many subsets. See also melodramas, epics (historical dramas), or romantic genres. Dramaticbiographical films (or “biopics”) are a major sub-genre, as are ‘adult’ films (with mature subject content). Drama film is a genre that relies on the emotional and relational development of realistic characters.

Turn in your highest-quality paper
Get a qualified writer to help you with
“ Ganres of Drama Film ”
Get high-quality paper
NEW! AI matching with writer

While Drama film relies heavily on this kind of development, dramatic themes play a large role in the plot as well. Often, these dramatic themes are taken from intense, real life issues. Whether heroes or heroines are facing a conflict from the outside or a conflict within themselves, Drama film aims to tell an honest story of human struggles. Drama Film Examples: The Shawshank Redemption – A former banker convicted of murdering his wife develops a lifelong friendship with a fellow prisoner, and ultimately tries to defy the odds by keeping hope alive inside prison walls.

The Godfather – The aging patriarch of an organized crime circle must secure the future of his family’s empire by leaving it in the hands of his reluctant son. Casablanca – A jaded nightclub owner must choose whether or not to help his ex-lover and her husband flee Nazi-occupied Morocco.

A Biography drama incorporates dramatic elements into a biographical film. These films differ from Historical and “based in truth” films because they specifically chronicle the life of a person or a group of people.

Biography films attempt to show a comprehensive and accurate picture of the specific subject, thus they tend to be serious and intense. Examples: Ray, Monster, Blow.

Courtroom drama film uses the justice system as a main component of the plot. The story usually unfolds inside a courtroom with the prosecutor, judge, jury, and the defense. Tension plays a large part in courtroom dramas as the verdict can often mean life or death. Examples: A Few Good Men, To Kill a Mockingbird, 12 Angry Men.

Dramedy film is a genre that has a dramatic tone yet important elements of comedy. In Dramedy film, the amount of drama and comedy are almost equally balanced. This balance provides comedic relief for the audience, while still addressing serious issues. Examples: Little Miss Sunshine, The Royal Tenenbaums, Lost in Translation.

Historical Historical is a sub-genre of Drama film that examines a specific time in history or group of people. Many Historical films aim to portray true events and people.

However, most Historical films are only loosely based on these events and people. These films tend to focus on the more glorified societies and people in history such as the Romans, specific Kings and Queens, or important political figures. Examples: 300, Frost/Nixon, Hotel Rwanda.

Melodrama film is a sub-genre that appeals to the heightened emotions of the audience. The plot and characters often are more unrealistic than those found in the traditional drama film. Melodramas usually cater towards a female audience and tell a story that centers on a great crisis and a heroic protagonist. Examples: The Bridges of Madison County, Steel Magnolias, Sophie’s Choice.

Period Piece is a sub-genre of Drama film that focuses on a specific time era. The era in which the film is set adds not only to the plot, but to the characters and costumes as well. A Period Piece films are often based on a novel. These films tend to have a longer run time than traditional Dramas. Examples: Pride and Prejudice, Mansfield Park, Romeo and Juliet.

Political drama film contains themes, characters, and a plot specifically about politics and the political scene. The main protagonist is often at odds with the harsh reality of corruption in politics. Many Political Dramas are based in fact but focus on exploring conspiracy theories. Examples: Mr. Smith Goes to Washington, Wag The Dog, The Manchurian Candidate.

Romantic Drama film is a genre that explores the complex side of love. The plot usually centers on an obstacle that is preventing love between two people. The obstacles in Romantic Drama film can range from a family’s disapproval, to forbidden love, to one’s own psychological restraints. Many Romantic Dramas end with the lovers separating because of the enormity of the obstacle, the realization of incompatibility, or simply… fate. Examples: Romantic Drama film include Titanic, Breakfast at Tiffany’s, Dr. Zhivago. 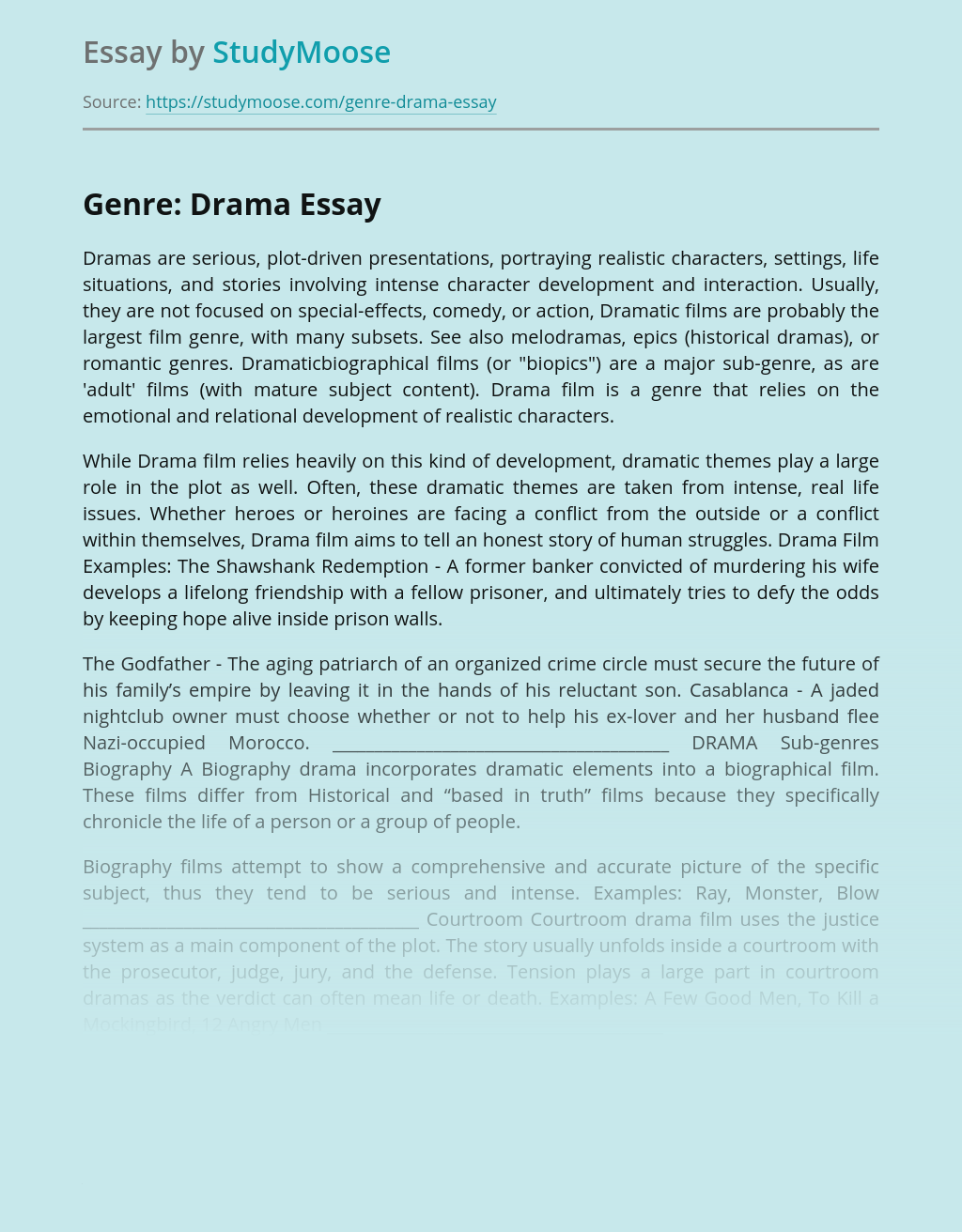 Turn in your highest-quality paper
Get a qualified writer to help you with
“ Ganres of Drama Film ”
Get high-quality paper
Helping students since 2015
Stay Safe, Stay Original