Gang Leader for a Day by Sudhir Venkatesh - Book Review

One thing the book made me realize was how society can turn a blind eye to problems that they do not want to be involved in by using the out of sight, out of mind mentality. Its no wonder the residents living in urban poverty have to look after themselves. The police were unwilling to provide protection for the residents because Robert Taylor was too dangerous to patrol and criminal activity was too high. Furthermore, a staggering amount of people live and rely on welfare to survive.

Don't use plagiarized sources. Get your custom essay on
“ Gang Leader for a Day by Sudhir Venkatesh – Book Review ”
Get custom paper
NEW! smart matching with writer

Thats just crazy. Compared to the residents at Robert Taylor, I am extremely fortunate to have access to basic necessities and not have to resort to criminal activities to make ends meet. Another point that was made throughout the book was that no matter how much people on the outside say or do, they cant help the community or understand it without living in it.

Even though the book was interesting to read, there were missing parts in the book that could have been elaborated on.

For instance, Sudhir gave very little insight into poverty life. When the word poverty is used, it involves people who do not have enough food to eat, enough money to afford basic essentials, live in poor conditions, and more. However, I never thought about how many women are routinely abused either sexually or physically and how often the poor are extorted. It is a great reminder to someone living in a better condition of how lucky they are.

Living in poverty is more difficult than one can imagine let alone climbing out of that situation. It was interesting learning about gang economics and the way they worked to a certain extent. Unfortunately, not all gangs function the same and it should be noted that inner gang workings differ with the times.

One strength of the book was being able to see the inner workings of a project and a gang. The author gives a glimpse into the life of the residents that lived in the projects and how gang involvement worked on both spectrums. Readers see the disadvantages that the Black Kings inflict on the community. For example the violence that the residents are faced with on a daily basis such as being extorted and selling drugs. The advantages that the Black Kings provide the community with is protection.

One thing that the author failed to do was recount J.T.s story. Even though he talked about J.T. and the gang life, he did not delve into the gang. The author basically lied to J.T. throughout the book and his friends in order to get information from them. The way he collected the information was questionable and should be reconsidered. He had no ethics in regards to J.T., who actually wanted the gang structure to be chronicled. Researchers would have more information about how going up in the ranks worked. I consider him a fraud because he lies to the residents and let them believe he is writing about them individually rather than a community as a whole. Additionally, at the end of the book, Sudhir tells his readers that he did not consider J.T. an actual friend, even though he spent six years alongside him. It just makes one mad that Sudhir could be so vile for information. 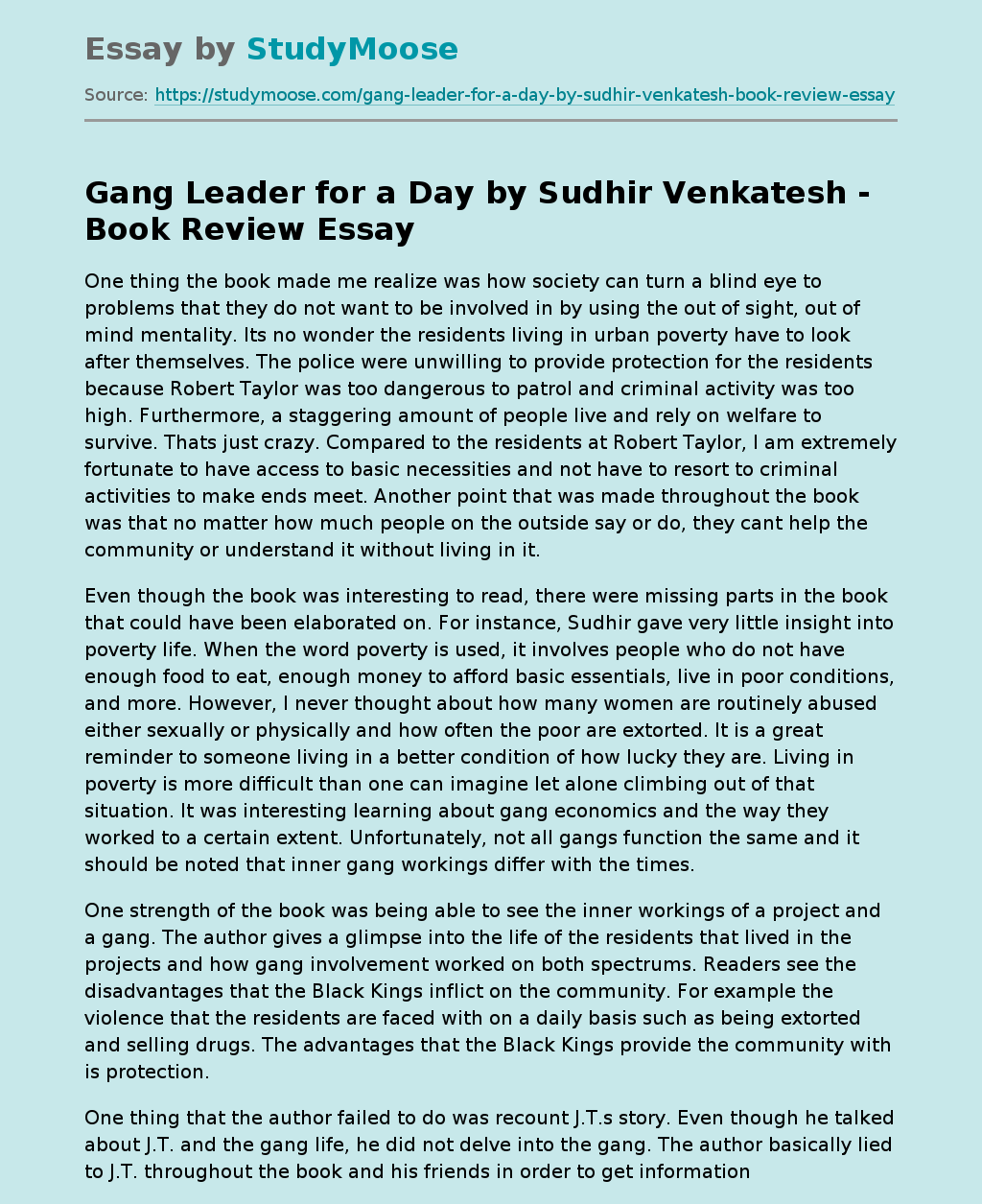