Mahatma Gandhi was highly grieved about the caste system that characterised Indian society. But it was untouchability that particularly pained him. All his life, he worked hard at eradicating this heinous practice from its very roots. He drew sharp distinction between caste and varna. Varna was based on profession. And in present day India, wrote Gandhi, there is no other trace of varnashram, as they are easily interchangeable, and were are actually interchanged at times, except for the varna of the Shudra.

Don't use plagiarized sources.
Get Your Custom Essay on Gandhi and Untouchability Just from $13,9/Page

Their plight continued uninterrupted from the ancient times.

Gandhi thought caste system to be a social evil, but untouchability was a sin. All his life, Gandhi worked for the untouchables. In fact, in one of his letters, Gandhi elevated the bhangis, or the night-soil cleaners as the very epitome of service for god, as they do their unclean work and cleanse society of its perils, and receive nothing but shame and admonition for it. Every man, thought Gandhi, should find a lesson in it.

They should dispense their services to society and expect no reward in return. That would be the greatest service to God.

Gandhi worked relentlessly to elevate the social status of the untouchables in india. He wanted penance for crimes of discrimination that have been perpetuated for thousands of years as he wanted society to work hard to relocate the untouchables on an equal footing with the other members of society. He called them harijans or ‘gods own people’. Gandhi went on a fast until death after the proclamation of the elections based on communal identity in 1935. He knew the cause of secular unification was lost for good, but he could not tolerate the non-accommodation of the harijans within the fold of the Hindu community.

A meeting with B R Ambedkar followed and seats were distributed on the basis of reservations. This was one of the greatest achievements in the political career of Gandhi. Gandhi was instrumental to a great degree to make the Indians conscious of the evils of untouchablity, a consciousness that went a long way in eradicating the evil from Indian society. This is a novel vow added by Gandhiji to the traditional vows. Gandhiji considered untouchability as a blot on Hinduism. Untouchability means pollution by the touch of certain persons by reason of their birth in a articular community. It was an evil practice.

It had greatly harmed the Indian society. It was surely one of the main reasons for its weakness and slavery. It is against Truth and non-violence and therefore against true religion. All are sons of the same God. All life is one. Considering some human beings as untouchables and oppressing them is senseless. It is sinful. This practice degrades its practitioners as well as victims. It is against reason, moral sense and spiritual experience. Hence Gandhiji rejected it. Cleanliness is good, but it should not be carried to absurd lengths.

The evil of untouchability has affected many area of life. It should be rooted out from all of them. This vow implies that we should work for removing this practice from the society. Barriers between man and man should be broken down. Touch does not defile. It is rather an expression of love. Removal of untouchability means love for the whole world. It is an operational aspect of non-violence. It will remove a gross injustice and lead to social cohesion. Mahatma Gandhi, the greatest religious reformer and the father of nation says.

I believe in the fundamental truth of all great religious of the world in theory, since there is one God, there can be only one religion. Gandhji did not believe in the Hindu Dharmashastras which prescribe caste customs as scared. In this context, he remarked “it is a tragedy that religion for us means today nothing more than restrictions on food and drink, noting more than adherence to a sense of superiority and inferiority. Let me tell you that there can not be any greater ignorance than this, birth and observance of forms cannot determine one’s superiority and inferiority. 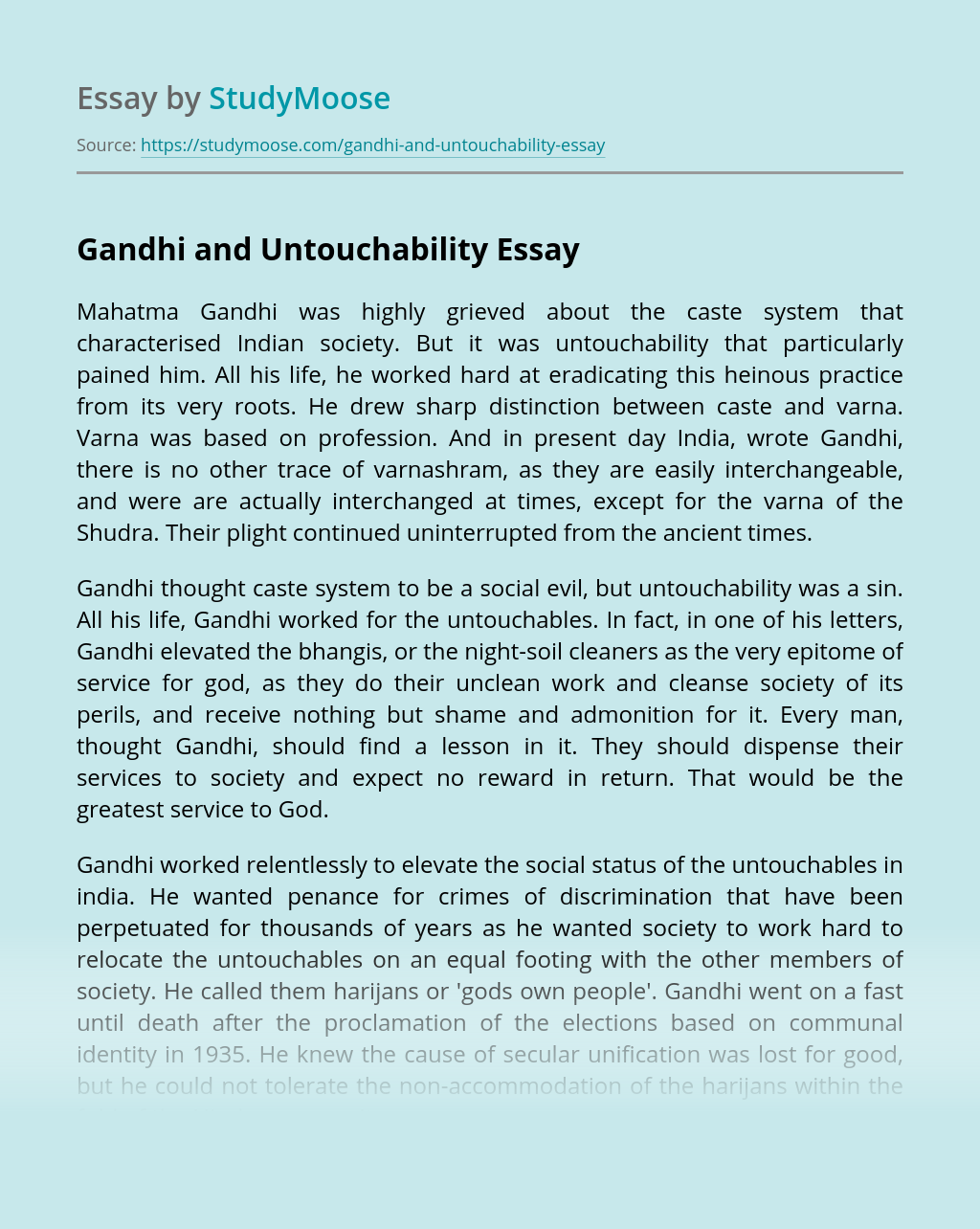