The Turkish government is made up of democratically elected representatives of the people divided into several ruling bodies. In September 2010, a referendum on constitutional reform backed amendments to increase the control of parliament over the army and the judiciary. Turkey is a strong proponent of liberal trade and investment policies. The European Union (EU) accession negotiations have required the country to increase the role of the private sector in the economy, enhance the financial sector’s efficiency and resiliency, and strengthen the social security system.

Don't use plagiarized sources. Get your custom essay on
“ Future Productivity And Economic Growth of Turkey ”
Get custom paper
NEW! smart matching with writer

However, the country faces challenge from Kurdish militants, and relations with Iran, Syria, Israel, and Cyprus are precarious. In addition, tensions between the ruling Justice and Development Party (Adalet ve Kalkinma Partisi [AKP]) and the Turkish Armed Forces (Turk Silahli Kuvvetleri [TSK]) have intensified since June 2009. The implementation of several reforms has resulted in a strong financial sector in the country.

The Turkish banking sector maintained a sound growth path in 2010, with net profit of $13.9bn. The financial sector had a compound annual growth rate (CAGR) of 20% during 2002–10, and was not affected by the global financial crisis. The country has followed sound macroeconomic strategies in combination with strong fiscal policies and structural reforms to manage economic progress and attract more foreign direct investment (FDI). However, the country’s declining current account balance has hindered its economic stability. The median age of the population was around 27 in 2010. With the rest of Europe facing the problem of an aging population, the country has an opportunity to increase its employment rate by capitalizing on its young labor force.

To further improve healthcare coverage, which is currently at 80%, the government assigned new staff to areas with a low density of doctors.

However, the country suffers from low human development and high infant mortality. In the future, economic growth will be led by the knowledge economy, and Turkey’s educational system may not be capable of meeting the challenge. Turkey has a strong ICT market that reached a value of $28.5bn in 2010. Under the government’s Vision 2023 strategy, the country aims to reach 30 million broadband subscribers, increase the ICT sector’s share to 8% of GDP, provide all public services electronically by 2019, and increase computer literacy to 80% of the population. The government doubled the level of expenditure on research and development (R&D) to 0.9% of GDP in 2008, and aims to reach 2% of GDP by 2013. In February 2011, the International Intellectual Property Alliance (IIPA) retained Turkey on its Watch List. The country provides a reasonably strong environment for business entities.

It was ranked as the 67th freest economy by the Heritage Foundation’s and the Wall Street Journal’s Index of Economic Freedom 2011. In the World Bank’s Doing Business 2012 report, the country was ranked 71st out of 183 countries. The constitutional referendum of September 2010 embarked upon constitutional amendments covering equality, privacy, freedom of movement, child rights, labor rights, the right to petition, parliamentary changes, judicial review, public service, judicial services, military justice, and economic planning.

Loopholes in the tax system have led to high tax evasion in the country. Turkey has strong environmental policies. As part of its Vision 2023 program, the country has developed strategies on renewable energy, waste management, water treatment, and hydrogen technologies. However, there is an urgent requirement for water treatment plants, wastewater treatment equipment, and solid waste management facilities. The volume of CO2 emissions increased from 206 million metric tons in 2003 to 268.7 million metric tons in 2010.

Turkey is a strong proponent of liberal trade and investment policies. In the World Bank’s Worldwide Governance Indicators for 2010, the country’s best score was in the government effectiveness parameter with 66. The EU accession negotiations have required it to increase the role of the private sector in the economy, enhance the financial sector’s efficiency and resiliency, and strengthen the social security system. However, Turkey faces strong conflict with Kurdish militants, which has not only fueled ethnic tensions between Turks and Kurds but also increased the security risk in the country. It also faces growing crises with Iran, Syria, Israel, and Cyprus. The 2010 Corruption Perceptions Index ranked Turkey 56th out of 178 countries.

According to the 2011 Index of Economic Freedom, the country scored just 44 on freedom from corruption, reflecting the high levels of corruption in Turkey. Tensions between the ruling AKP and the TSK have intensified since June 2009. In September 2010, a referendum on constitutional reform backed amendments to increase the control of parliament over the army and the judiciary. This has only worsened relations between the military and the government. 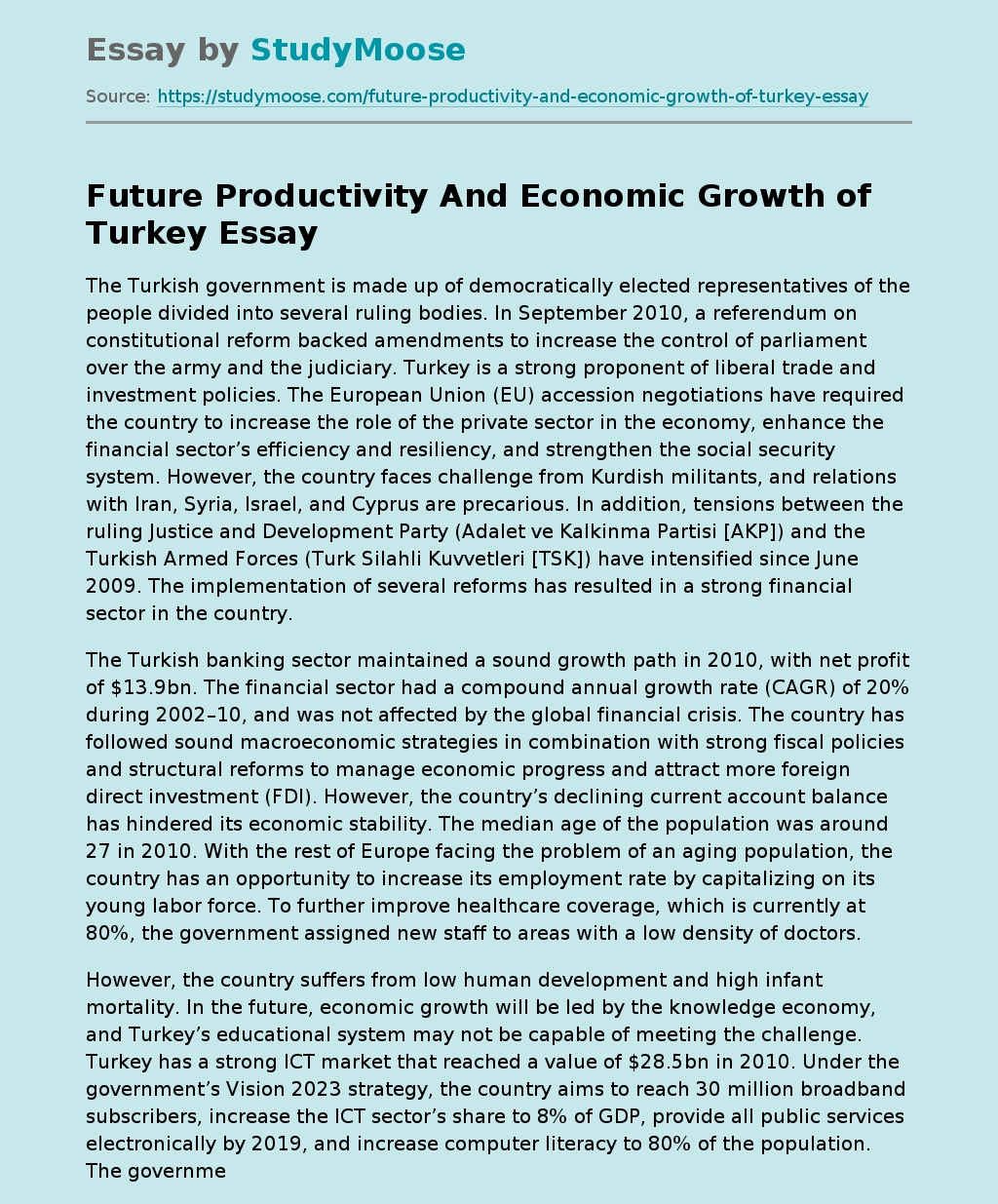