For the use of the term “democracy” as referring to a system involving multiparty elections, representative government, and freedom of speech. Democracy is a form of government in which all eligible citizens have an equal say in the decisions that affect their lives. Democracy allows eligible citizens to participate equally—either directly or through elected representatives—in the proposal, development, and creation of laws. It encompasses social, economic and cultural conditions that enable the free and equal practice of political self-determination.

Don't use plagiarized sources. Get your custom essay on
“ Future of Indian Democracy ”
Get custom paper
NEW! smart matching with writer

India is the largest democratic country in the world. All around the world, India’s democracy is taken as an example for the countries all over the world. But the real question is this type of democracy really beneficial for our country.

Where is it taking our country in the near future? What is the future of Indian democracy? In India anybody can stand for elections and win to became member of legislative assembly of that area. Anybody can become prime minister, chief minister.

But is this a good thing? Developed Countries like USA have highly educated people as their leaders. For a developing country like India where proper measures need to be taken for development, uneducated officials are useless for the development of the nation. The future of our country is in the dark as most of the ministers and leaders are less qualified or uneducated. Corruption is in the roots of our system. Most of the money sanctioned for development of the country such as roads, schools l, colleges, etc is consumed by oh our corrupt leaders.

Most of the money we pay as taxes is eaten by our leaders. There is no strict measure for verifying or trying these leaders. The five year form of government is a curse for our country. All the ruling partiers enjoy the ruling power for the first four years and In the last year many rules are implemented to lure the voters and gain votes of the people. In thinking about Indian democracy and its future prospects, commentators have lavished far too much attention on “politics” in the narrowest conception of the term.

There is much speculation, for example, on whether India might move towards a two-party system or some variation of it, with the Congress and the left parties constituting one bloc and the other bloc being constituted by BJP and its allies. But this kind of scenario has little room for parties such as the Bahujan Samaj Party (BSP) and the Samajwadi Party (SP), which together dominate politics in Uttar Pradesh, where efforts by the Congress to reinvent itself do not hold much promise of success. In the General Elections of 2004, the Left Front won 60 seats and came to hold the decisive swing vote.

While so far the left has shown little inclination to revolt, and West Bengal is rapidly retooling itself to become attractive to the corporate world and foreign investors, the possibility of genuine and irreconcilable differences developing between the Congress and the Left Front should never be minimized. The wisdom and resilience of ordinary people has been exemplified not only at the ballot box, but in grassroots movements and cultural practices of syncretism. Secondly, the Constitution of India remains, despite attempts to subvert its emancipator provisions, a document and a vision that continues to hold out the promise of equality, justice, and opportunity.

It has survived the wreckage of an authoritarian executive and will outlive the Supreme Court’s present disposition to allow massive land grabs in the name of progress and development. Thirdly, though Mohandas Gandhi’s assassins never seem to rest, the specter of Gandhi remains to haunt, guide, and inspire Indians who are resistant to everything that passes for “normal politics” and have not entirely succumbed to the oppressions of modernity. As I have elsewhere written, Gandhi took great risks and was not in the least cowed down by history, the sanctity of traditions, or scriptural authority. Some six decades ago, Indians entered into a tryst with destiny. Now is the time to gamble everything on the unique experiment that constitutes Indian democracy

Future of Indian Democracy. (2016, May 08). Retrieved from http://studymoose.com/future-of-indian-democracy-essay 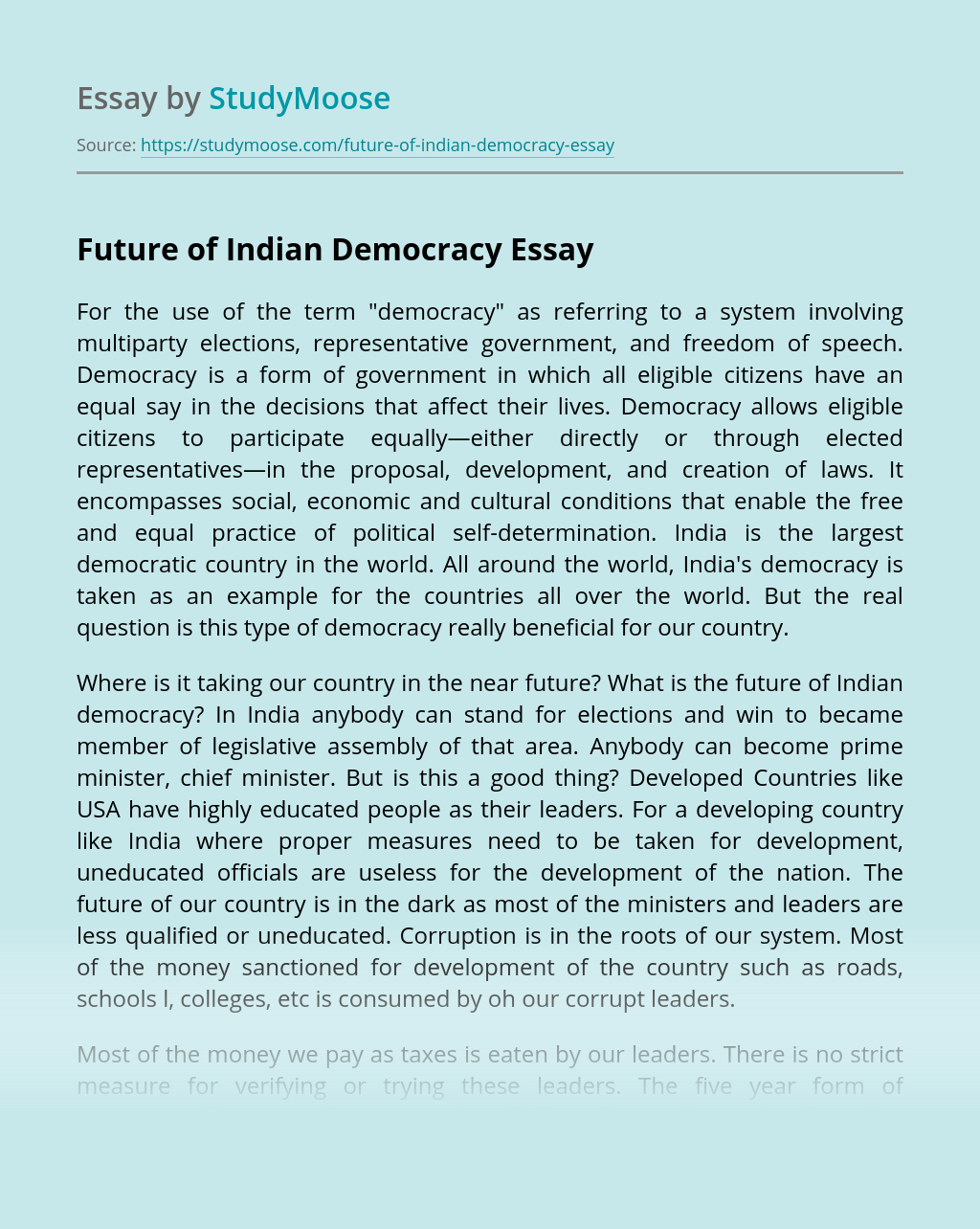