In the passed couple of decades, the foods we deem to be natural or of the Earth are instead Genetically Engineered. The term Genetically Engineered does not mean that the entire vegetable or food is fake but rather means that there is at least one genetically modified ingredient in the food that is sold all over stores, which raises a great health concern for many people. In the feature production of the documentary known as The Future of Food looks at how modern day technology has changed the food we consume and the effects it can have on our health.

Don't use plagiarized sources.
Get Your Custom Essay on Future of Food Just from $13,9/Page

In watching this film about all the advancements that science has come to in the world with the food being eaten everyday, both the positive and negative effects of all those technological changes, its only right to think of the countries that barely have enough food in general or the people who are losing their livelihoods because of the advancements created by science in first world countries.

A first world country like the United States has not only a great amount but also lots of variety of nutrition; however, even this is still not enough to “satisfy” such a wealthy nation because steps are still being taken to continue to “improve” nature. Projects were done that helped produce corn in all kinds of different colors and creating bigger than normal sized strawberries. A question seems to arise, is all this technological advancement necessary?

Are we as a society taking unnecessary measures to “fix” something that is natural and worked since the beginning of time? In the medical world, many health problems have been examined where food and nutrition were identified as partial contributors to the problem. This film helped in explaining how enzymes are used to knick corn DNA and how foreign DNA was then presented into the corn cell walls. Consuming the genetically modified corn caused allergic reactions and stirred a health concern about labeling genetically modified foods.

In my particular opinion it should be the people’s right to know whether the food they’re ingesting has been altered genetically or tempered with from its natural state. Nevertheless, this does not belittle the question as to why it is necessity to alter the food in the first place. In order to formulate a ground based opinion I need to weigh the positives and negatives. Natural food always has the benefit of being “natural,” however, genetically engineered foods sometimes has the advantages of looking more appealing, tasting better and/or having a longer lasting flavor.

I have experienced this first hand I have grown a distaste to certain organic foods simply because they just didn’t taste nearly as good as those that are genetically engineered even though the organic foods were supposed to be fresher and of course natural. This certain taste for food could just be that I got too used to the taste of all the preservatives that go into foods. It’s interesting how I got used to chemically preserved foods and genetically engineered tastes that overtime became the good tasting ones while the healthier ones were rejected by my taste buds.

Another benefit is that genetically engineered foods end up being cheaper because they have a greater resistance to environmental conditions that would normally spoil the unaltered form and are also made in quantities not given the same attention organic foods are given to be fresh and ripe. Being that they are made in greater quantity, they are available for more people for cheaper prices, becoming the food of choice. The question would be, are the quantities made and the decrease in prices good enough to outweigh the negative effects of genetically engineered food?

Another point and question would be why do many countries still remain unfed and continue searching for methods to feed their fast growing populations if these genetically engineered foods are produced in such a surplus manner? Keeping the advantages of genetically engineered foods in mind, there are definitely several noteworthy disadvantages too. An advantage was the surplus of food, however, how is it a benefit if such foods are harming the body?

Some would agree that it is better to feed and raise a healthy smaller sized population with natural, unaltered forms of food than to infect a large population and have them suffer from the repercussion caused by the food they had consumed. Also, most people that are not keeping up with this field of work do not know that there are these bodies that have consumed the modified foods for such prolonged time periods and have overtime probably developed immunity to the side effects the modifications can have. In these genetically engineered foods the DNA is altered, and just as changes in human DNA lead to disorders, consumption of foods with altered DNA may have the same fatal effects.

Certain genetic modifications can even go as far as cause cancers and brain and organ damage. A huge disadvantage that most people do not notice, especially those who live in urban areas, is that due to the production of the genetically altered foods a lot of farmers have been put out of jobs. These farmers are not needed as much anymore because more crops can be made for cheaper and therefore they no longer make as much money on each crop they plant and sow as they once did, as was shown in Central American countries.

Now days, while technology could be helping the economy by decreasing the price of foods for people, it is also harming people who depended on the unaltered food to bring them income. The U. S. economy and industry is choosing quantity over quality, which is not beneficial to our health but instead just our wallets. I believe that its not fair for people not to know what is in their foods and usually people don’t seek food that can hurt them, therefore, it was crucial that the “Genetically Engineered Right to Know” act get passed.

It would allow people to know what they are consuming from the labels on the foods and therefore prevented conditions that could’ve risen from individuals allergic to a modified substance. The Department of Agriculture and the Food and Drug Administration is supposed to be on top of the foods produced and their effects. Nevertheless, it seems that genetically modified foods don’t cause enough of a significant threat in order for them to take action and stop the advancement, rather than promote it and seek ways to improve it.

What would bring this matter to a flashing red alert? Though I admitted that genetically altered food does taste better, I still do not agree with the fact that I am consuming and enjoying the taste of unhealthy food. People often look for the most ripe fruits and healthy looking vegetables when they go shopping, but for a lot of produce these bigger fruits and vegetables end up being the modified ones. Though I personally have only been able to see the advantages of these foods, I realize that the disadvantages outweigh the benefits of having genetically modified foods.

From a realistic point of view, being a student on a low budget it would be unpractical for me to purchase anything but the cheap genetically altered food. Looking even at the bigger picture, many individuals and families have the same outlook I do. Therefore, many people may be against the genetic modification of food, yet not much course of action will be taken. People are comfortable with their life styles, making the cases and effects of modified foods not seem like such a big deal. This shows that the wrong approach is probably being taken to bring this to significant awareness.

To promote foods that are not going to be altered, there needs to be ways to produce the same great quantities and keep prices affordable under the economic conditions of the country and the budget of the average American Family. It was crucial to pass an act that will help identify the genetically engineered goods but still it is not sufficient enough to solve the issue at hand. This matter is truly a very controversial issue, containing both pros and cons; therefore, we as a government and a knowledgeable society we need to take a stand and incorporate more ideas in to solving this domestic problem. 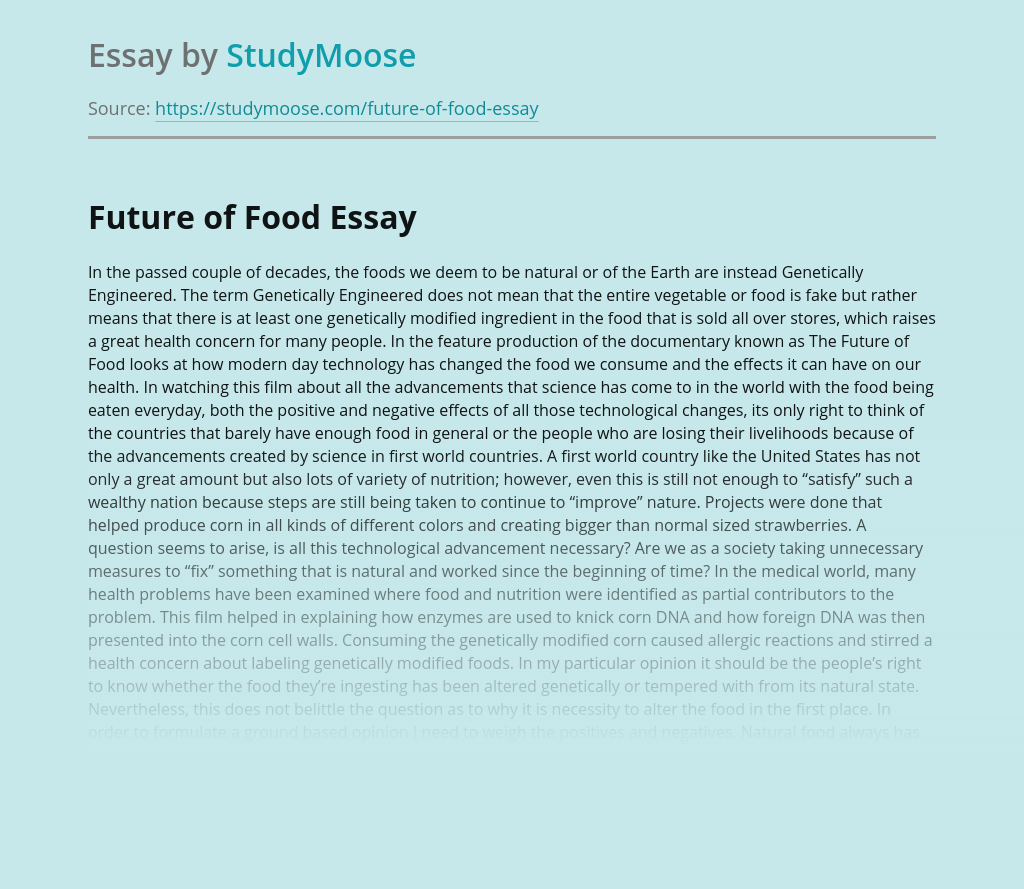 Production of Food in the Future

The idea of feeding a population of 9 billion by the year 2050 is daunting. Consider the United Nations’ estimate that 1 billion people in the world today are hungry. The average number of malnourished people worldwide between 1990and 2006 is 850 million with the high point of 1.023 billion hungry people, reached in the...

Abstract: Online food ordering services are websites that feature interactive menus allowing customers to place orders with local restaurants and food cooperatives. Much like ordering consumer goods online, many of these allow customers to keep accounts with them in order to make frequent ordering convenient. A customer will search for a favorite restaurant, choose from...

Identify balanced meals, snacks and drinks for children in their early years, following current government guidance on nutritional needs. Children should be encouraged to eat a varied diet. Setting a schedule for meals and snacks will help keep the children satisfied through the day and avoid them asking at various hours for food. They should...

Make a recommendation regarding the future strategic direction if the company. According to the SWOT analysis, MD is regarded as a star taking the BCG matrix. Therefore MD should hold its position within the market. In order to do this, we have recommended a few strategies for MD to maintain its position. To maintain its...