Full Metal Jacket vs the Things They Carried

I’m going to show you a short clip from the movie “Full Metal Jacket” directed by Stanley Kubart, the guy Mr. MacBride’s brother mentioned yesterday in the LMC. In this scene, this group of American soldiers finally found and wounded the sniper that had already killed 3 of their men. One of which is Joker’s, the protagonist’s, best friend, Cowboy.

In the scene we just watched, the sniper was wounded, and Baldwin wanted to leave the sniper to rot, but Joker kills her instead.

Turn in your highest-quality paper
Get a qualified writer to help you with
“ Full Metal Jacket vs the Things They Carried ”
Get high-quality paper
NEW! AI matching with writer

This leads the audience wonder: “Did Joker kill her because he wanted to end her misery, or did he kill her out of frustration and as way of revenge for his friend, Cowboy?” The significance isn’t in the answer, but in the question itself. The fact that this movie makes you doubt Joker’s motives shows that this is a true war story. There is no moral in Full Metal Jacket.

There are no good guys and bad guys, and there isn’t a clear line drawn between justice and evil.

You don’t feel hatred towards the Viet Cong sniper, and you don’t have undying support the American soldiers. It’s different from all the other cliché, patriotic war movies. Like Tim O’Brien writes “A true war story is never moral. It does not instruct, nor encourage virtue, nor suggest models of proper human behavior, nor restrain men from doing the things men have always done. If a story seems moral, do not believe it.

If at the end of a war story you feel uplifted, or if you feel that some small bit of rectitude has been salvaged from the larger waste, then you have been made the victim of a very old and terrible lie.”

No one would argue what Joker did was a “model of proper human behavior”, because no one knows if he killed the sniper out of sympathy or to fulfill his lust for vengeance. Baldwin wanted to do what “men have always done”; he wanted to let the sniper feel the amount of pain and sorrow he feels; he wanted her to die a slow, painful death, he wanted revenge. The ending doesn’t uplift you, and the situation the soldiers were in allowed no rectitude. All these factors integrated create a masterpiece to what O’Brien would proudly consider as a true war story.

The Things They Carried is ironic in a way that it tells you how to tell a true war story, but the novel itself is a work of fiction. However, this doesn’t mean the stories themselves aren’t realistic; they are, as O’Brien would say, the story truth. Sometimes the story truth is truer than the happening truth, because it makes things feel present. Reading this book makes the reader feel confused, and even cheated, because by creating a “fictional” protagonist called Tim O’Brien, a soldier who fought in the Vietnam War, the author, Tim O’Brien, a Vietnam war veteran, is luring us into believing that these stories are true. By treating this work as a work of non-fiction, the reader sympathizes for the soldiers, and forms an emotional connection with the characters.

In the chapter, “Good Form”, O’Brien tells you everything is made up. We, as readers, experience a sudden psychological change, and this change mirrors the psychological change the soldiers of the war experienced. We view the stories differently now, and the soldiers were forced to view life and death differently. Notice in “The Lives of the Dead”, everyone in O’Brien’s platoon shook hands with the dead Vietnam soldier, gave him a can of orange slices, and talked to him. In order to cope with the brutality of the war, these guys had to reanimate the dead. They had to see and treat him as if he was still alive to relieve their guilty conscience of murder.

After we realize these tales are just tales, we readers are forced view these stories through a different lens, and those boys who went to war had to see the war through the lens of soldier. Much like how Lieutenant Jimmy Cross was trained not to see his men as individuals, but rather as interchangeable units of command. O’Brien’s intentional setup allows the reader to experience to a certain degree how the soldiers felt entering the war. If he just told us real stories, the happening truths, we would still empathize with them, but we wouldn’t truly understand. This is why the story truth is sometimes truer, and more expressive than the happening truth.

The Things They Carried is truly a great form of art, not only because of its stylistic language, but because it abandons tradition and blurs the line between fiction and non-fiction, creating brand new possibilities in the world of literature.

Full Metal Jacket vs the Things They Carried. (2017, Feb 22). Retrieved from https://studymoose.com/full-metal-jacket-vs-the-things-they-carried-essay 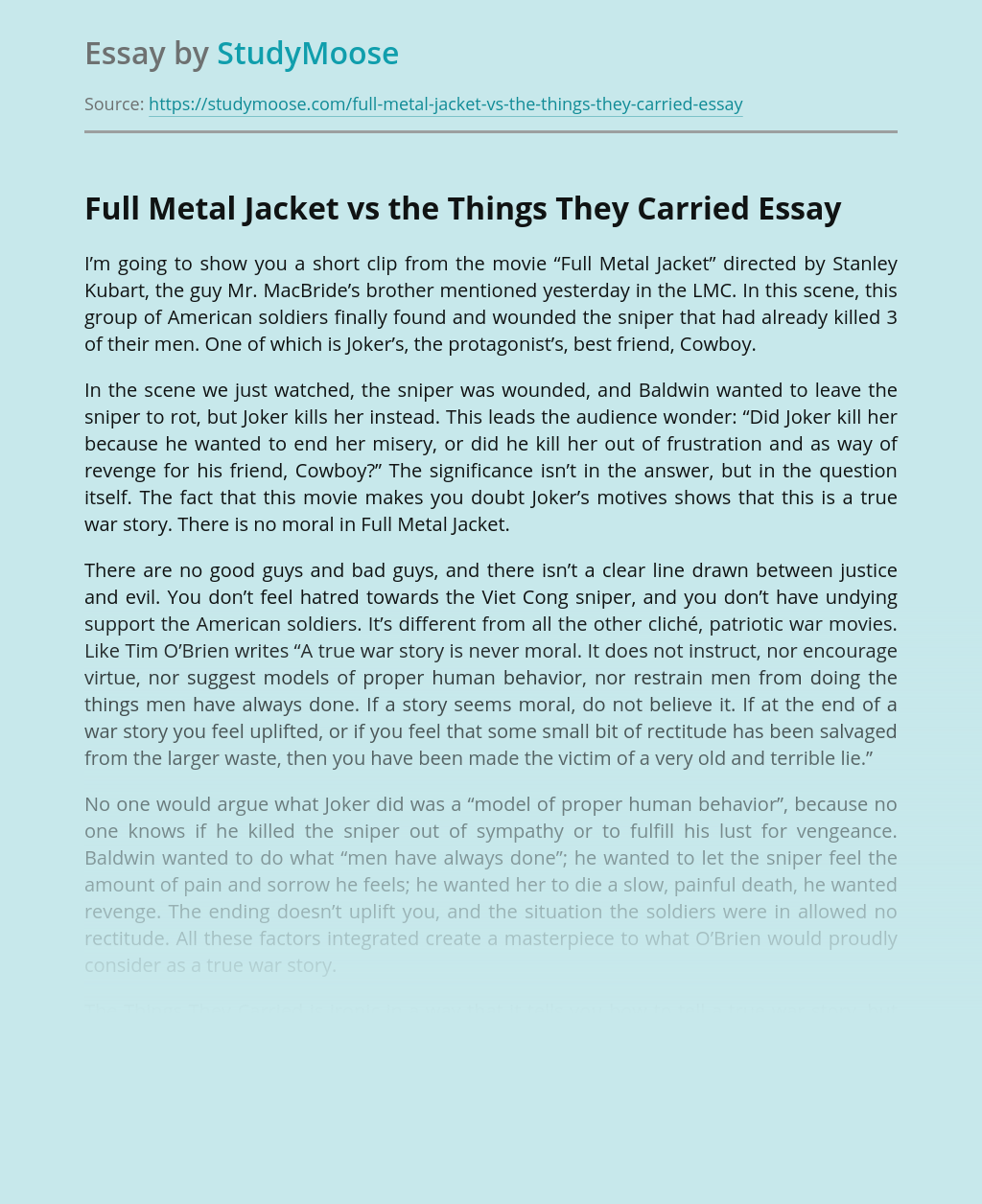 Turn in your highest-quality paper
Get a qualified writer to help you with
“ Full Metal Jacket vs the Things They Carried ”
Get high-quality paper
Helping students since 2015
Stay Safe, Stay Original