In the last half century of watching television many authors, critic, and people in general has had an opinion on weather watching television is a good thing or a bad thing. In a couple of recent articles that I’ve read one Author Steven Johnson, who wrote “Watching TV Makes You Smarter”. Tells us of how violent and gruesome shows of this era are as opposed to shows of the past. Steven also tells us of how there are some good shows that actually teach people and helps them to learn in a different way.

Don't use plagiarized sources. Get your custom essay on
“ Frontline Digital Nation ”
Get custom paper
NEW! smart matching with writer

The second article that I recently read was “Thinking Outside The Idiot Box” by Dana Stevens. Not only is Dana an author she is also a paid television critic who states that TV does not make us any smarter and that television is “brain-liquefying poison” for all but especially for children. Dana insist that Steven Johnson theory be put to the test by having everyone partake in a National TV Turnoff Week event to see if anyone gets any dumber.

In my opinion Television has many different purposes, such as keeping us updated with the news, educating us on different species/creature inside and outside our planet, but the main purpose for television is soley for entertainment.

When Television is being debated whether it is good or bad, I think that it should be taking into consideration just as any other subject we talk about when past/present is involved, and that consideration is “Evolution-Things forever evolving or changing”.

“Evolution”, just as militaries have evolved over the past centuries so has our everyday life. If you can remember back when you was a adolescence the things that you did and/or cared about then such as playing outside with your friends all the time, getting junk food from the store, or just living a carefree world for the most part. As a teenager those adolescence things become less important to you because you are probably into dating, driving, sports or some other kind of school activity. When we became adults the things that we once knew really do not exist because we have evolved over the past years. So why would television b any different? In 1939 when the Television was first introduced the screen was black and white and had no sound. Over the years television became colorful, sound was added and the screen got bigger. Now televisions are in 3D huge and flat.

In shows of today such as 24 and The Sopranos: Steven Johnson states how violent and gruesome the shows are and how the “Sleeper Curve” alters the mental development of young people today because you have to integrate far more information than you would have a comparable TV show decades ago. Dana Stevens believes that shows such as 24 and The Sopranos are the “ great leap forward in human cognition: multi-threading” Which makes viewers behave like “rats in a behaviorist maze”. I believe that people are entitled to watch whatever show they please because that’s what television is for “entertainment” after working a long shift and attending school I like to go home and kick my feet up with the remote and watch

Whatever show that I think is appealing to me at the time whether it’s a comedy, drama, horror, western, or sitcom. Steven Johnson also states in his article about shows associated with “quality” entertainment shows such as Murphy Brown and Frasierand how the intelligence arrives fully formed and the witty things that the actors say to one another to avoid lapsing into a tired sitcom but says that “You no more challenge mind by watching these intelligent shows than you challenge your body by watching Monday Night Football”. Steven also states how another televised intelligence is on the rise that has cognitive benefits ascribed to reading: attention, patience, and retention the parsing of narrative threads.

Dana Stevens says shows such as The Teletubies which is a children program instructs toddlers the basics of vegging out. She also states how shows are “zapworthy” and watching TV only teaches us to watch more TV. I say of course TV makes you want to watch more TV but that is the same as if you were reading a good book. After finishing the book you want to read the sequels to that book because your attention has been hooked and you want to know how, when, and were it takes you. Television is the same way but more visual. Besides television is a multibillion dollar company made by the viewers and just for the viewers.

In conclusion I have written to you about the “Evolution” of our past and present society as it may be related to the military, our everyday lives over time, or whether it’s Television. In any case as long the world spins then any/everything inside is subject to change and as this world change there will always be debates about that change. Some say and believe that Television makes people act out with what they see on the screen into reality. I am not one of those believers because television has only been around for 74 years so what/who was the blame for all of the violence and corruption before television was introduced? I do however believe that no

Should be allowed to or allow their children to watch TV all day, As I stated earlier its main purpose is meant for entertainment. 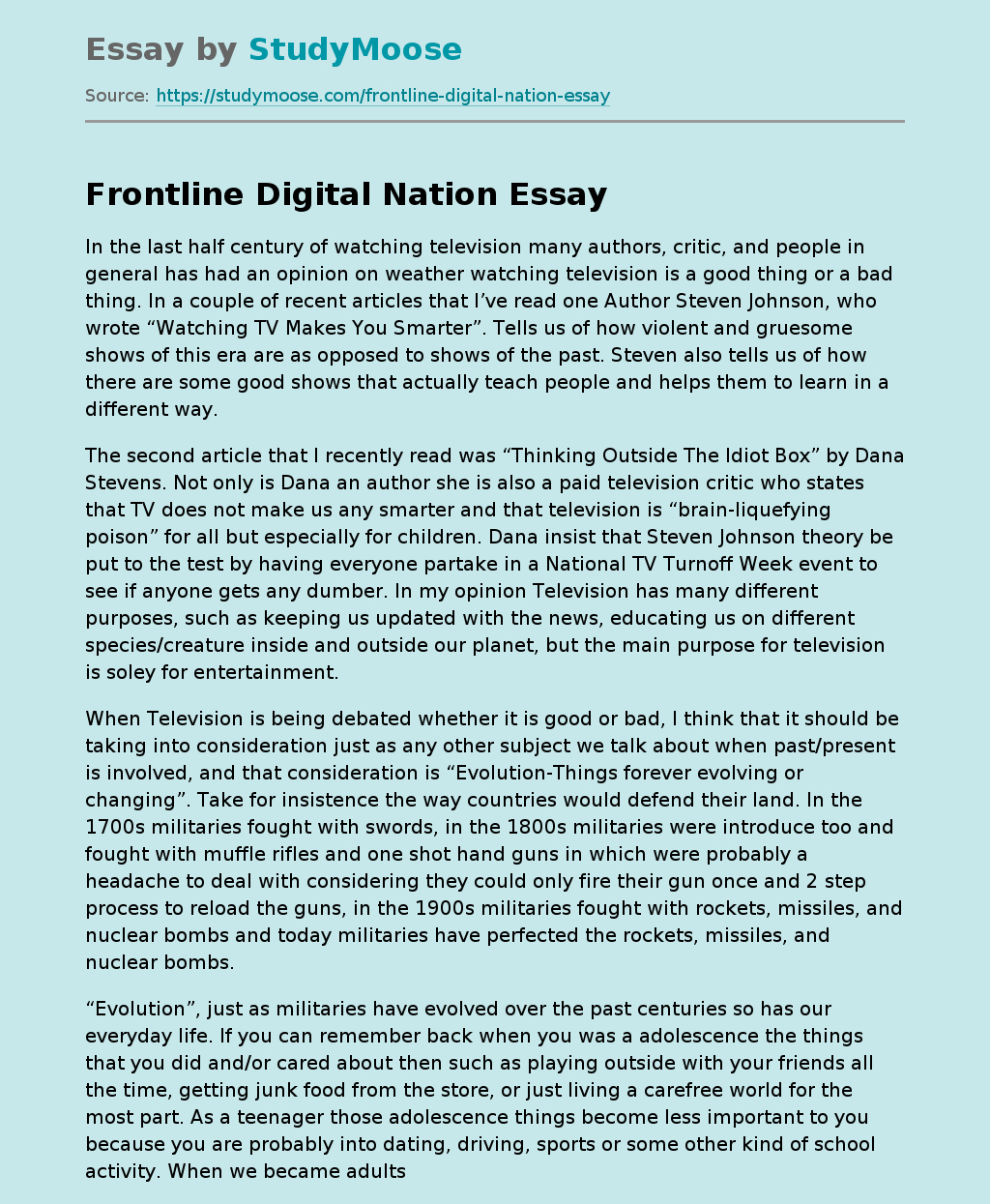