From Failure to success

Robert Kennedy’s statement that “Only those who dare to fail greatly can ever achieve greatly” has been painfully evident in my life. Until recently, I had never dared to fail greatly at anything, and as a result, I never achieved greatly at anything either. Luckily, I have learned the importance of attempting something when there’s a looming possibility of failure. At Boys’ State this summer, I spent a week living with 300 other young men while learning about how North Carolina’s government works.

Don't use plagiarized sources. Get your custom essay on
“ From Failure to success ”
Get custom paper
NEW! smart matching with writer

To give us a firm grasp of the governmental process, each floor elected town officials, each dorm elected county officials, and the three dorms together elected the state officials. The Boys’ State program also had its own moot court program from which Supreme Court Justices were elected.

At Boys’ State, I ran for positions in the town and county government, and for Supreme Court Justice. Of the seven positions I competed for, I only won two elections.

Proficient in: Success And Failure In Life

I count this as a failure because the only positions I won were positions that had no candidates to oppose me. The loss that affected me the most was Supreme Court Justice. This was the position I had wanted to win even before I arrived at Boys’ State, and I gave up all of my afternoon activity time so that I could participate in the moot court program and remain an eligible candidate for Supreme Court Justice. Unfortunately, the elections for justices were the last of all the voting, and by midnight, everybody wanted to get back to their dorms so the time for our speeches was cut from one minute to ten seconds.

Needless to say, I was so unprepared for the sudden change of events, that I barely had time to say my name and one reason I was running before I ran out of time.

I lost the election, but the loss taught me that I needed to become more visible so that I would not have to depend on a speech for people to realize that I was a person they should vote for. However, if I had the chance to go back and change anything I had done there, I probably wouldn’t change a thing. The reasons for this are not as difficult to understand as they probably should be. Firstly, if I went back and changed anything I had done then, I would not have learned that lesson, and would now be lacking a very important experience in my life. Secondly, good things also came from my loss of the election for Supreme Court Justice. In my failure, I brought the attention of the gubernatorial candidate onto me. The next morning, he asked me if I would like to be his Secretary of Crime Control and Public Safety which is one of the highest positions at Boys’ State. After a moment of shock, I immediately accepted the position. Thus, as a result of my own great failure, I achieved greatly.

From Failure to success. (2016, Jun 27). Retrieved from https://studymoose.com/from-failure-to-success-essay 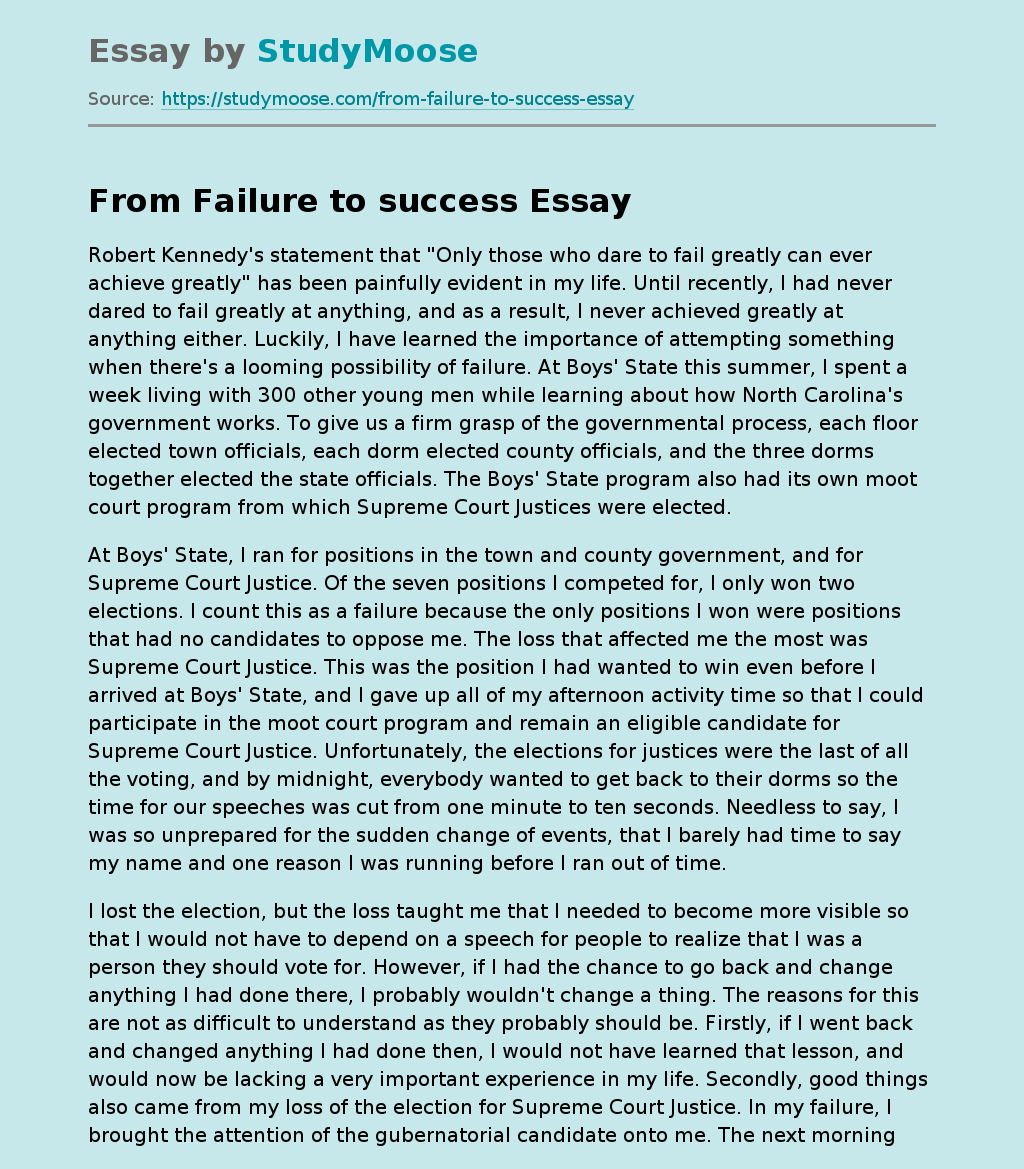