Early to Middle Adulthood covers a vast age group. This age group is from 18 years of age to 65 and more. There are many changes that an individual will experience while at the beginning of this age groups and transcending through till the end. The most obvious of these changes can be recognized by appearance, being the physical change. However, there are far more changes that happen, from a cognitive thought process change to a self-internalized realization of perspective roles that an individual chooses to take on for themselves.

Don't use plagiarized sources. Get your custom essay on
“ From 18 Years Of Age To 65 And More ”
Get custom paper
NEW! smart matching with writer

These changes have very distinct characteristics that define each phase of life. Early adults or emerging adults are usually categorized as adults from the age group of 18 – 25 (Berger, 2010). This is the time where adults are well into their stages of puberty and growth and they are at the height of their physical potential. Males tend to have more muscle in comparison to fat content, their health is in top shape, and their ability to conduct physical activity is at its peak.

In women, they are also in their body’s physical prime, they gain majority of their breast tissue, their hips spread, and their bodies are in prime shape for child bearing. Aside from both the male and female’s optimal body compositions, their bodies are also resistant to sickness and ailments (Berger, 2010). Most of these physical attributes are true because at this age group and individuals physical activity is at its highest. Being highly active will contribute to the overall physical fitness of the individuals that partake in it on a common basis.

Emerging adults are very active and forward with their practices. From sexual habits to extracurricular activities, their life choices are having both immediate and long term consequences. This age group of emerging adults has made it a common practice to engage in semi to extremely dangerous behavior, also known as edgework. Edgework is described as “occupations, recreational activities, or other ventures that involve living on the edge, managing stress and fear” (Lyng, 2005, p.387).

Despite obvious consequence of injury or death, these emerging adults are persistent in finding new ways to challenge barriers and limits. As far as sexual promiscuity, this age group of emerging adults has been described as serial monogamists – “most have one steady partner, then another, then another” (Berger, 2010, p. 415). Due to this increase in multiple partners, there has been an increase in the spread of STD’s, contrary to the drop in birthrate in recent times partly due to contraceptive use. Decades ago there was a double standard that females should remain virgins until marriage, and that it was ok for young men to feed their sexual urges with any young lady that was willing. In recent times it has become the norm for young adult females to have just as many sexual partners as their male counterparts. If this standard continues as it has, “HIV and other STIs(sexually transmitted infections) can spread easily and rapidly anywhere in the world” (Berger, 2010, p.416).

“Within 2-4 weeks after HIV infection, many, but not all, people experience flu-like symptoms, often described as the “worst flu ever.”… Many people who are infected with HIV do not have any symptoms at all for 10 years or more (HIV/AIDS, 2013). This might one day lead to a deathly viral outbreak considering the average number of sexual partners that both men and women within the early adult age group are having. Although there are a mass amount of young adults out there moving from sexual partner to sexual partner, these young adults are eventually faced with a decision to settle down. Berger (2010) describes the preconceived ideal type of relationships that were sought by young adults: Traditionally, young men and women preferred friends of their own sex and engaged in sex-specific activities with them.

Male friendships centered on shared activities such as sports, cars, and contests (sometimes fighting with words, not weapons). Women’s friendships were more intimate and emotional, involving self-disclosing talk about health, romances, and relatives (p.437) These emerging adults, before they hit the age of 18, they were trying to break away from their parents and the rules implemented over them as adolescents. Now that they are adults and have finally broken away and gained their independence, they subconsciously have an urge to connect with others both intimately and socially. Young adults are using things like facebook, twitter, and other networking sites to form a deeper social relationship with their friends. However intimately, they are finding relationships that are centered on passion. “Passion seems to be sparked by unfamiliarity, uncertainty, and risk, all of which are diminished by the growing familiarity and security that contribute to intimacy as well as by the time needed to demonstrate commitment” (Berger, 2010, p.413).

There have been many instances where relationships have failed to progress past the passion into commitment and intimacy. Young adults typically find their successful relationships after their early adulthood when the reach middle adulthood. Middle adulthood is characterized as the age group just before your 30’s until age 65. Around age 30, adults will start to experience a loss of elasticity in their skin and a small decline in their hearing. Many of these characteristic loses wont decline enough to notice until an adult reaches a much later age. Many of these different areas of loss will decline at a slower rate due to healthy habits and consistent activity taken place during their younger adulthood. Eye sight also has a tendency to slowly decline as well as strength and height in males and skin elasticity showing wrinkles and fertility in females.

After age 30, fertility rate without complication is very small. A woman’s body no longer has the ability to compensate and bounce back after pregnancy. She is also more susceptible to high blood pressure, gestational diabetes, and other birth complications. Not to say that a successful birth is impossible, the chances of complication are typically much higher than possibilities of conception in their 20’s. The next milestone that middle adult females experience is menopause, which is typically seen around age 50.

Menopause is when “ovulation and menstruation stop because of a marked drop in production of several hormones” (Berger, 2010, p.449). Males within this age group also experience some sort of loss in their reproductive means. They experience something very similar to menopause in women. Their loss can be coined by the term andropause. “Andropause should be used to signify the lower testosterone levels of older men, which reduce sexual desire, erections, and muscle mass” (Berger, 2010, p.450). Unlike women, men don’t completely lose their ability to produce testosterone or semen. However, the amount of testosterone and viable semen does decrease with age.

Middle adulthood is also characterized by one of Erikson’s Eight stages of life; generativity vs stagnation. Berger defines generativity as, “when adults seek to be productive in a caring way” (Berger, 2010, p.498). Berger also goes further in explaining the need for adults to care or provide care by quoting a part of Erikson’s book: The time and energy required to provide emotional support to others must be reconceptualized as an important aspect of the work that takes place in families. . . . Caregiving, in whatever form, does not just emanate from within, but must be managed, focused, and directed so as to have the intended effect on the care recipient (p.498)

Most times within this age group, this need is fulfilled by older middle adults taking care of their children or grand-children. They find purpose by fulfilling the wants and needs of a younger generation. This is slightly different than the age group they were in before where they still found pleasure in relationships, but it was self-fulfilling in nature or had a sexual previse undertone. At this stage, adults have focused their energy in what they can do or give to someone else. Early to middle adulthood is a very complex age group that experiences several changes within that time.

Whether those changes be physical in nature, intellectual, or cognitive, they all have distinct characteristics that define each phase. These phases are typically broken down by age, but the true breakdown depends on the individual and when they meet the requirements of that phase. Only then do they progress to the next phase in life. 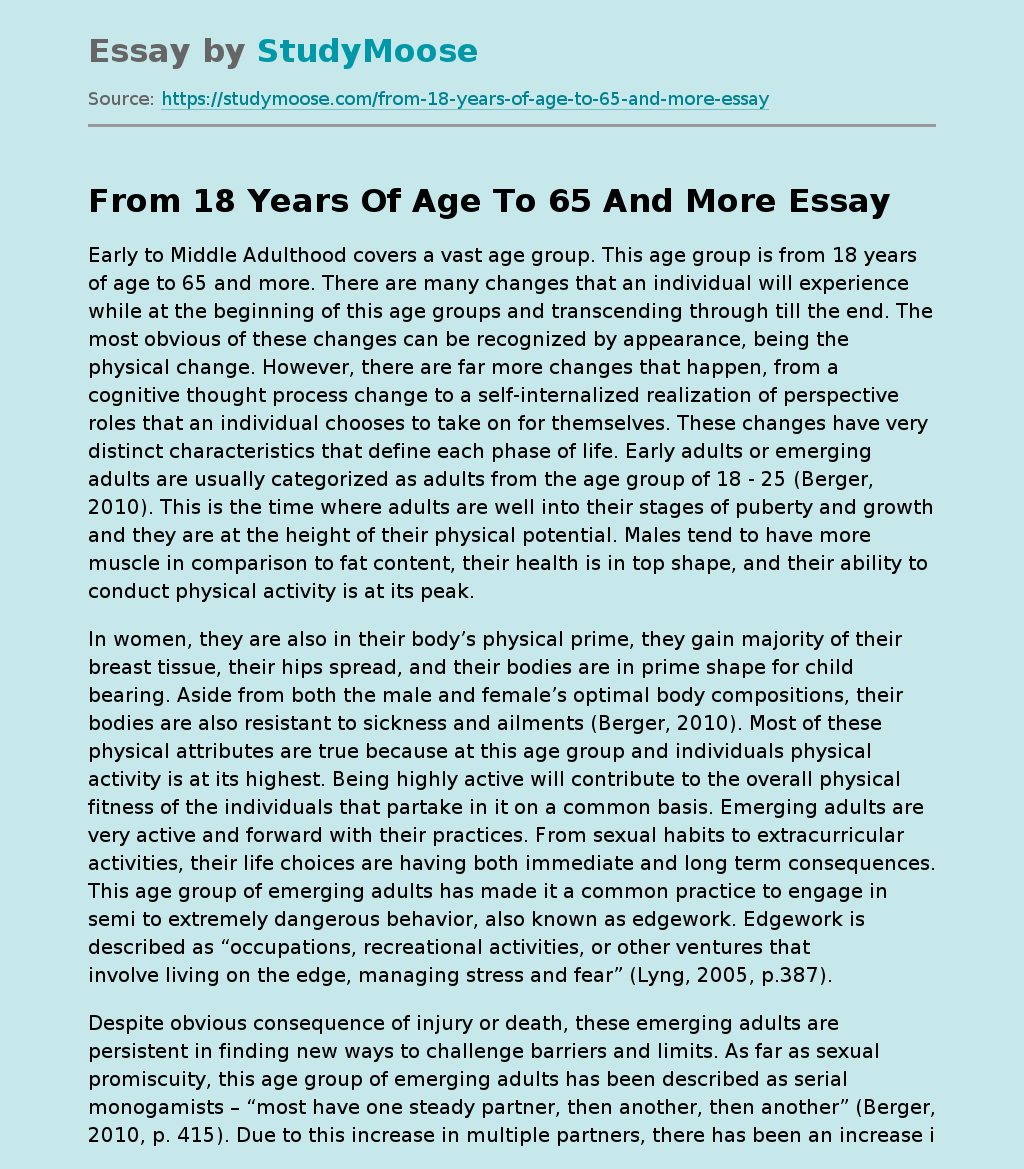