Friedrich Wilhelm Froebel is said to be the “Father of the Kindergarten” for his huge involvement, and devoting his life to the development of a system of education for young children. In German, the word kindergarten means children’s garden, and he thought that this was best in the age of six and younger. He spent his entire life helping with the development of the young and early childhood development. Wilhelm Froebel was born in the Thuringia region of Germany. He had a childhood that was not so fond for remembrance because of how terrible it had been for him.

Don't use plagiarized sources. Get your custom essay on
“ Friedrich Wilhelm Froebel ”
Get custom paper
NEW! smart matching with writer

This is what shaped him to be able to come up with the idea of kindergarten. Froebel lost his mother before the age of one, and this meant that he had been left with this father who had to take care of three boys because Froebel had two other brothers. Their father never had much time for any of them. As a boy that would be hard for any child, and this caused him to have to spend most of his time alone at his home.

He spent a lot of that time in the gardens by his home, and would play there for most of the day (Coron 4). Exploring all day was what he loved to do the most, and this would make a major influence on what he would do for the rest of his life. He started teaching at a school when he was a young man at Frankfurt Model School, and this school was a school that was focused on the teachings of Johann Heinrich Pestalozzi, who was a very well respected teacher of his day.

This school accepted poor children, and orphans. He believed that children needed to be involved in very active ways. As he left this school, he left it with his very hands on learning approach, and went to privately tutor children. The parents of the children that he tutored were very kind in giving him space in their garden to use to help teach the children. In 1837 Froebel founded his first school, and called it Kindergarten, or the children’s garden (Coron 4).

This was a very exciting thing because before he opened this school, if you were under the age of seven, you did not attend school. At the age of seven, you then could go to school. Now that Froebel opened his school, children at the age of two were able to go to school (coron 3). Froebel was very free with the children, he allowed them to have a lot of activity time to be free with themselves, and figure things out. He believed that this was the best idea for them to have their own space, and time to figure out, as he did as a child. The mot that Froebel gave the children was a classroom, he believed that giving children a place to create, and imagine freely was the best gift anyone could have given them. Froebel wrote books, and in his book “Education of Man” he wrote “Play is the highest phase of child development-the representation of the inner necessity and impulse.” (coron 5). He thought that teachers should be friendly people who are helpers, not disciplinarians.

In his classroom there were blocks, pets, and finger plays. (Coron 5). He was inspirational to all. Froebel designed his classroom to have the following things as meeting a child’s needs; Physical activity, because it is important for a child to move, the development of sensory awareness and physical dexterity, creative expression, exploring of ideas, the pleasure of singing, the experience of living among others, and satisfaction of the soul. (Coron 4). These are all things we teach today to our children, and encourage our children to do. I think going back and looking at the bones of things could really help our society as a whole. Froebel was a very inspirational man to a lot of other great theorists such as Maria Montessori, who started Montessori schools. (Coron 2). I am in great belief of how much of a influence Froebel had on the early childhood education as a whole.

He really was the father of kindergarten. I think that him having such an influence, really helped us shape the early education now. Froebel believed that “Humans are essentially productive, and creative” (coron 1.) I believe he is right, no matter what age you are, you are creative in your own way. It starts out at birth, even with how you relate to your mother, and father is creative, and how you interpret things as a young child is important. I know that if Froebel had not been involved, that what we call early childhood now, would not be the same as it is now. I am a firm believer in how he started to do things, letting children develop their own ideas about who they are, and how to do things in the world around them is really all a part of life. 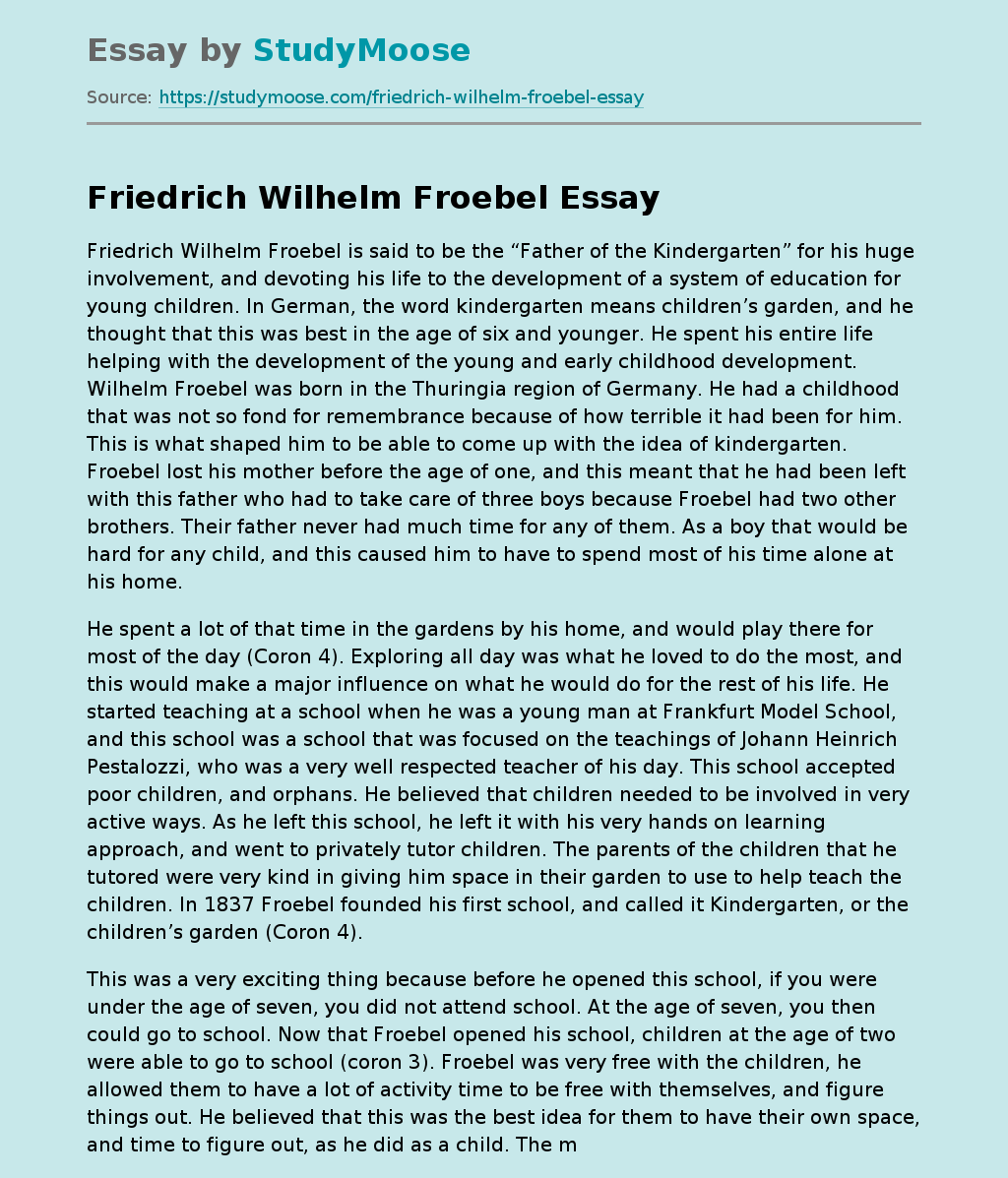