Freudian View of the Film 'The Wizard of Oz'

The film The Wizard of Oz is definitely about the concept of returning home. This is made clear throughout the film. Dorothy’s entire time in Oz is spent trying to get back home to Kansas. Then when she gets back home she tells Aunt Em that “all I kept saying to everybody was ‘I want to go home.'” This fits perfectly with the time, 1939, that The Wizard of Oz was produced.

One reason was that due to the depression, many people were forced away from their homes and into cities.

Don't use plagiarized sources. Get your custom essay on
“ Freudian View of the Film ‘The Wizard of Oz’ ”
Get custom paper
NEW! smart matching with writer

Another reason was that America was on the verge of entering into another war, WWII, and the threat of having to send troops away from home was very real. And, as stated by Paul Nathanson in Over the Rainbow (156), “going home is fundamentally linked, for many Americans, with growing up.” With this in mind, it seems a good way of evaluating The Wizard of Oz is by Dorothy’s process of growing up, her maturation.

Also, since Dorothy’s adventure to Oz is clearly in the form of a dream, it seems a good way of analyzing Dorothy’s maturation is by looking at this dream compared with real ones, and using modern dream analogy from the Freudian perspective.

The act that spurs the entire action of the movie, according to Freudian Daniel Dervin ( Over The Rainbow 163 ), is Dorothy witnessing the “primal scene”. The “primal scene” refers to a child witnessing sexual intercourse between mother and father; an moment that is both terrifying and confusing to the child.

According to Dervin, this event sends Dorothy towards her final stage of childhood development ( Freud believed in three stages of childhood development ) the phallic phase. Terrified of the idea of being destroyed by father’s phallus, Dorothy projects ( another of Freud’s ides was that of projection, turning a feeling into something other than itself ) her fear into the form of the tornado. In deed Dervin even suggests that this tornado “may well be a remarkably apt representation of the paternal phallus in its swollen, twisting, penetrating, state which is part of the primal scene.” The question then becomes, where did this primal scene take place?

In the movie Dorothy has her own room, but in the book she shares a one-room house with Aunt Em and Uncle Henry. Understanding this background, Freudians believe that viewers subconsciously understand the cinematic setting as an appropriate one for the primal scene. Dorothy is then taken away by the tornado, a form of her anxiety over the primal scene, to Oz. When Dorothy arrives in Oz she is able to symbolically replay the primal scene by means of smaller conflicts that Dorothy can more easily overcome. Dorothy does deal with her feelings towards Aunt Em in her dream about Oz. In Kansas it is shown that Aunt Em is unable to provide Dorothy with enough love and attention. This is evidenced by her dismissal of Dorothy’s pleas for help with Toto. Since in Kansas any negative feelings towards Aunt Em are not allowed, Dorothy represses them. Now that Dorothy is in her dream world she can express those hostile feelings. Dorothy does this through splitting Aunt Em into two separate people.

This is done by making her father into the Wizard. According to Dervin ( Over The Rainbow 165 ), there is a connection between the Wizard and the storm in Kansas. The Emerald City could be used as an example of this because of the verticality of the bars that make up the city drawing distinct comparisons with the verticality of the tornado. In addition, when Dorothy meets the Wizard for the first time, his image is accompanied by flashes of lightning and shouts of thunder. The storm is obviously connected to the tornado, which is also connected to the phallus, and in turn father himself.

When Dorothy first speaks with the Wizard he is very intimidating, but Dorothy builds up enough courage to confront him and ask about her four wishes. The Wizard responds by ordering Dorothy to retrieve the witch’s broomstick, or in symbolic terms the phallus, and return to its rightful owner. It is at the point of killing the Wicked Witch of the West that Dorothy enters into the phallic stage. Freud describes the phallic stage as a period when the “sexual impulses and object relations of a child’s early years become reanimated, and amongst them the emotional ties of its Oedipus Complex”( An Autobiographical Study 23). Dorothy now switches her focus from the mother to father. By killing the witch and giving the broomstick to the Wizard, Dorothy is enstilled with a new sense of power and increased sexual curiosity.

Dervin goes into this point in Over the Rainbow by saying, “When Dorothy lays her broomstick at the base of the Wizard’s ominous image, it is a clear measure of her newly acquired sexual knowledge. Putting the phallus where it properly belongs, however, not only disarms the wicked phallic mother but also sets in motion a process that will demythologize the all-powerful Wizard, for he now stands for a merely human organ.”(167) Shortly after, Toto pulls away the curtain that shields the Wizard and he is shown to be only an illusion of power. Dorothy looking behind the curtain is symbolic of her looking in on the primal scene again, but this time she finds it to be very reassuring. Dorothy discovers that the Wizard is not a super human force that should be feared. She finds him to be quite normal and unthreatening.

Earlier Dorothy projected her terror towards the phallus onto a tornado, she now does not feel the need to use projection. Most Freudian followers believe that the final action that enabled Dorothy to work through her trauma was working with the Wizard to help the three companions. Since Dorothy participates with the Wizard in “humanizing” them she is symbolically bearing his children. Together they make full humans out of puppets, and this helps Dorothy relive the primal scene. She is then granted with defining the sexual roles by returning her father’s phallus, and giving up her own phallic wishes. She also then establishes her femininity by seeing her powers of reproduction. The Wizard also offers to take Dorothy back to Kansas himself.

Earlier being linked to the weather, it is no coincidence that he is going to take her by means of a hot air balloon. After the Wizard accidentally leaves without her, Dorothy has to find another way back home. Dorothy realizes that in order to return home all she has to do is awaken from her slumber, which she can do now because she has worked through all of the problems in her development. When Dorothy does awaken there is no longer a viscous storm outside caused by the primal scene, but rather a sunny day.

There are all her friends, filled with a tremendous amount of emotion, huddled around the bed. The image is one of a maternity setting with everyone surrounding the new mother. And maybe Dorothy did give birth in that room. Not to a newborn baby, but to a new chapter of herself. That leaves only one main part of The Wizard of Oz left unaccounted for, the ruby slippers. Paul Nathanson tells us that in fairy tales red is associated with blood, but when it is a girl, red is associated with menstrual blood and the onset of puberty ( Over The Rainbow 174). This corresponds beautifully to the idea that Dorothy was entering the phallic stage and was indeed experiencing changes. Slippers themselves have even been linked to sexuality.

The classic Disney film Cinderella revolves around this concept of sexuality and slippers. The slippers are a symbol of Cinderella’s sexual readiness. When her sisters try on the slipper, their feet do not fit because they are still dealing with the problems of puberty. That is why their feet bleed when they try on the slipper. These ruby slippers support the Freudian theory even further.

One aspect is that Dorothy does not seek out the ruby slippers, but rather finds them on her feet. Glinda puts them there magically without Dorothy’s consent. Another thing is that menstruation cannot be stopped, and this means that Dorothy will have to learn to live with menstruation forever. Glinda tells Dorothy, “There they are and there they’ll stay.” In Dorothy’s case, as well as with probably almost all girls, these changes in her body are scary and she looks at them as a kind of curse. All the ruby slippers have gotten Dorothy at the beginning is persecution from an evil witch. By the end of the dream though, Dorothy has worked through the mystery of the ruby slippers and is ready to go home. In order to go home, she needs but to click the slippers together three times while reciting, “There is no place like home.” Interestingly enough the last image of Oz is of the ruby slippers, and the only way back home is for Dorothy to ritually acknowledge them.

Though to many a strict Freudian view is bizarre, it is something that stills needs to be looked at. In The Wizard of Oz, Dorothy goes to Oz to work out anxiety brought on by witnessing the primal scene between her two parental figures. She also is experiencing many changes within herself that she needs to deal with. Dorothy’s return to Kansas is marked by a new sense of sexuality and femininity, as well as a better understanding of herself. Dorothy returned home ready to participate fully in the adult community

Freudian View of the Film 'The Wizard of Oz'. (2021, Jun 02). Retrieved from https://studymoose.com/freudian-view-of-the-film-the-wizard-of-oz-essay 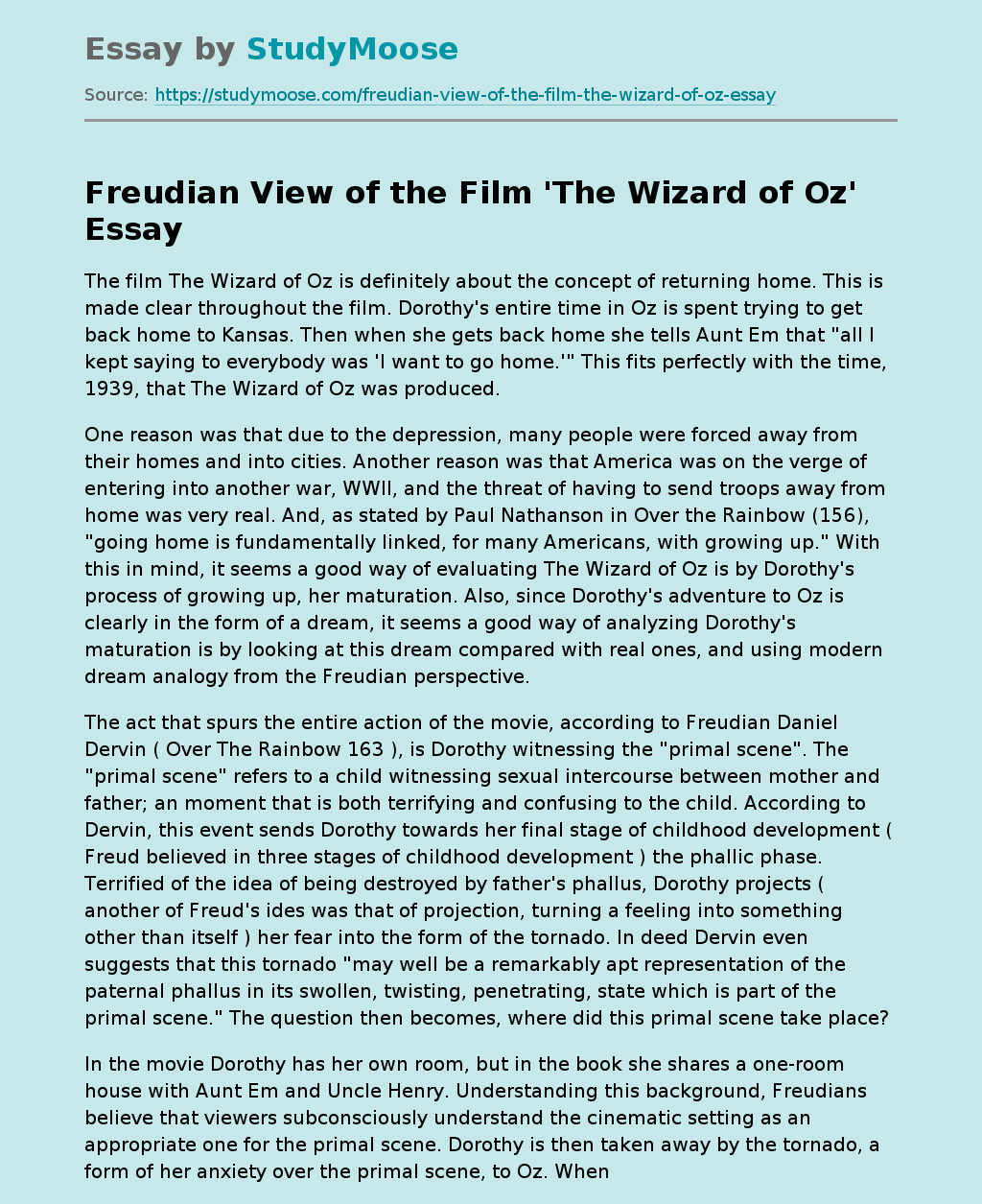