The Fresh Prince of Bel-air

The Fresh Prince of Bel-Air is and American series which was broadcasted in 1990. The good thing about this series is that it represents Will smith a famous celebrity who was ex-rapper and star and played different roles in variety of movies but the series which made him popular was “Fresh Prince of Bel-Air”. The series has a cultural impact and it has comedy situation (sitcom). This series is aimed at teenagers because they find it interesting. The theme of the series made him feel that he was a prince.

Don't use plagiarized sources. Get your custom essay on
“ The Fresh Prince of Bel-air ”
Get custom paper
NEW! smart matching with writer

They made successful title credit sequence attracting audience to watch the rest of the play.

Many features are used to describe the role model of Will Smith. In the opening scene the first thing we saw was will’s face because the show is mainly about him. The role model of Will Smith is appeared as a young black teenager who attracts mostly the black teenagers. The wording used by Will Smith is slang and tweicanism, which makes the audience, feel it’s cool and interesting for them.

The clothing and accessories attracts audience and the way he is shown playing basketball shows audience that he is interested in sports and also an energetic person.

The series also suggests that he prefers freedom and does things against the law such as graffiti and he is a non- conformist. The personality of Will Smith is shown as popular and lively characters, which suggest that he is a friendly, funny and cheeky person. The attitude and behaviour is shown as being respectful to others in the house because of being called “Fresh Prince” which makes him feel he has authority over the town.

In the opening sequence of the key feature the music rap is teenagers favourite and it also made the show successful. The music used in the play is beep rap, livery and with strong beats.

The music rhythm makes teenagers feel lively with series. Teenagers all over the world empathise with Will Smith and his Title credit sequence as it’s related to most of their lives. In title credit sequence music enhanced the illustration and it also explains the moving images. Another aspect that is used to increase the popularity of the series throughout the opening sequence was camera angles. The first short used in the opening sequence was high angel shot established series which suggest that character is small and vulnerable when Fresh Prince’s face is shown and this shot is showing that he is powerless.

The second shot used was medium this show when Fresh Prince get in trouble with the police which makes the police look strong and powerful. The tracking shot was used when boys were playing basketball in the court. This shot is following the action of character, showing what the characters are doing. Camera angle is used to link the image where teenagers give the reaction of loss of power. Another shot used is close -up when Fresh Prince’s mum is talking to him proving her point of view and to empathise her words. The close-up camera angle used is showing California fresh on the number plate.

Last angle used is facing camera looking at the audience he personally communicate with the audience so it makes the teenagers think that they are part of his life and the action. Another successful feature used throughout the opening sequence was mise-en-scene. Mise-en-scene suggests that the theme of series is culture clash. It shows the streets of Philadelphia and black lifestyle. The props used in the scene were baton, which is used by policeman to show his power and authority and also to empathise violence. Dull polluted looking place and high raise flats, which makes it unattractive for audience.

The clothes and bright colour used make the opening sequence standout. The basketball court looks hard which suggest that hard landscaping is used and the net around the court could suggest that the boys are trapped. Blue sky and Hollywood sign means movies, fames fortune and it is and icon of wealth and glamour. Fresh Prince used in capitals suggests that Fresh Prince is more famous then California because Fresh prince is written in bigger and brighter letters then California. Big white house of Bel-Air suggest entering new life. The purpose of mise-en-scene is to highlight the main theme of the series.

Another feature used to make the show successful is font & colour, which is used in the opening sequence to show what the series is aimed at. Slang language is also used. The colours used are bright and acid colour. The font used is bold Italic, smaller, sky-blue elegant and sophisticated. The use of slang language and bright colour attract teenagers towards the series. Overall, it can be said that title credit sequence made the series successful because it attract audience attention and persuades them to watch the rest of the series.

Lot of scenes is based on culture, his character and behaviour which are different from others. The opening sequence also shows fresh Prince uncle is a rich person. The American dream shows that his uncle is rich, black and has family living in huge house in America and he invites Fresh Prince to live in house. Another successful feature of opening sequence is that the celebrity Will Smith becomes a famous movie star after this series. The worldwide success of the series makes the show most popular.

The Fresh Prince of Bel-air. (2020, Jun 02). Retrieved from https://studymoose.com/fresh-prince-bel-air-new-essay 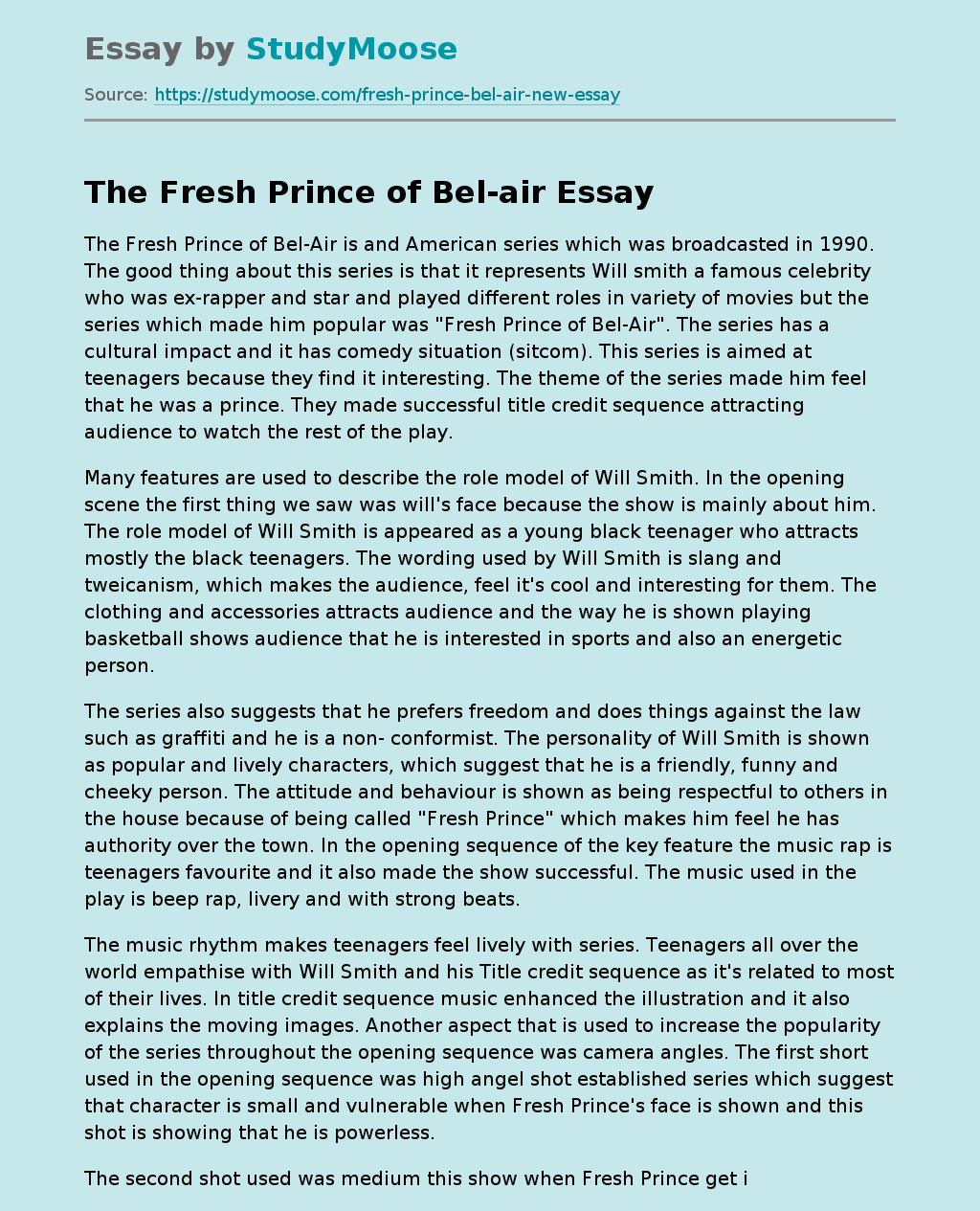