French Revolution: Research PaperPAP English II: 3rd PeriodCarter CooperJanuary 31, 2019 Les Miserables, written by Victor Hugo, was based off the June Rebellion of 1832 in France. The rebellion was also called “The People’s Uprising”. This events thats this novel was based upon took place over the dates of June 5-6, 1832. It was started during the public funeral of General Jean Maximilien Lamarque. The June Rebellion was started for different reasons such as economic failure, poverty, and disease. Throughout the book, Les Miserables, tells us about many of the reasons for the June Rebellion taking place, and how the people reacted to such a great piece of history also known as The People’s Uprising.

Les Miserables was set in France, 1832. It was a time of rebellion for the French people. The people were going through economic distress. This was a time and place where women had no other option than to become prostitutes in nasty places like Saint Denis. Fantine for example, became a prostitute to pay for her sick child.

People did what they had to do to prosper during this terrible time, and place. Les Miserables starts with Jean Valjean serving a prison sentence of nineteen years for stealing a loaf of bread to help his dying family. Once Jean gets out of prison he is begging for places to stay and for food to eat. The bishop gives Jean food and a place to stay. Jean takes advantage of the bishops good givings and tries to steal the bishop’s gold, silver, jewelry, and prized possessions.

Jean was caught and was returned by the local police, but the bishop gave him a second chance. The bishop told the police that Jean was given the items. The bishop then let Jean Valjean on his way to fulfill a promise to become a better man. The rest of the novel is set in France. Jean fulfilled his promise from the bishop and has now made a living in manufacturing. Jean was so successful he even became the mayor. Jean comes across Fantine, a dying mother struggling to pay for her daughter Cossettes well being. Jean tells Fantine that he will find Cossette, and make sure she has a good life. Jean buys Cossette off of the evil family who has been using her for child labor. Cosette and Jean move away so that Cossette can lead a normal life. Cossette grows old and falls in love with a man named Marius. Jean is unliking of the idea at first, but then realizes the two are actually in love. After knowing Marius joined the revolutionist at the barricade, Jean joined the barricade as well. Marius becomes injured and Jean carries him all the way back to Cossette. After Marius’ and Cosette’s wedding, Jean realizes he can’t keep running from the past. while Jean is on his deathbed he tells about his past. Now Jean finally can rest at peace. The exposition of the novel, Les Miserables, is Jean Valjean serving nineteen years for stealing a loaf of bread. This gives the reader an idea of how Jean Valjean might feel and act. The rising action of the novel could be multiple different things. The rising action of the novel is when Jean receives a second chance from the bishop. Jean was set on his way with a second chance after attempting to steal the bishop’s gold and silver. The climax of the story is the moment Valjean confesses to Marius about his past and everything he had done. Then, the climax carries on when marius finds out Valjean is the man who saved his life. The moment falling action starts is when Valjean purposes he is moving away. Jean thinks it will be better for Cossette if he moves away so that he will not cause Cossette any trouble with the law. The resolution of the novel is when Jean can die peacefully next to Cossette, and Marius after being found in the convent. Poverty throughout France in the 1800’s was a big problem too. Many reasons for the poverty included food shortages, taxes, and economic stress. These factors played a big role in Les Miserables as well. An estimated 20,000,000 people were under the average poverty line in france during the 19th century. This was a growing problem in France. Food shortages was a major factor for a lot of the poverty in France. Many poor-hungry citizens went on riots for bread. The winter before the June Rebellion, cold weather ruined the new harvest. The average working man had to look forward to spending 97% of his hard earned salary just to buy enough food to survive. After about two years after the June Rebellion has started, the solutions for the food shortages were not yet met. The winters were still cold and the harvests were not promising. This was a big spark for harsh poverty during the 1800’s in France. Another problem with the poverty in France throughout the 1800’s was the taxes. New taxes were made. These taxes were unfair, and excessive. They were excessive for multiple reasons. France was the highest taxing state in europe at one point. This was due to the demand of high spending and a growing bureaucracy. The taxes were unfair because the main aim for taxing were lower class individuals. The lower class was targeted for taxes and it became a repeating event that never inclined to a median tax. 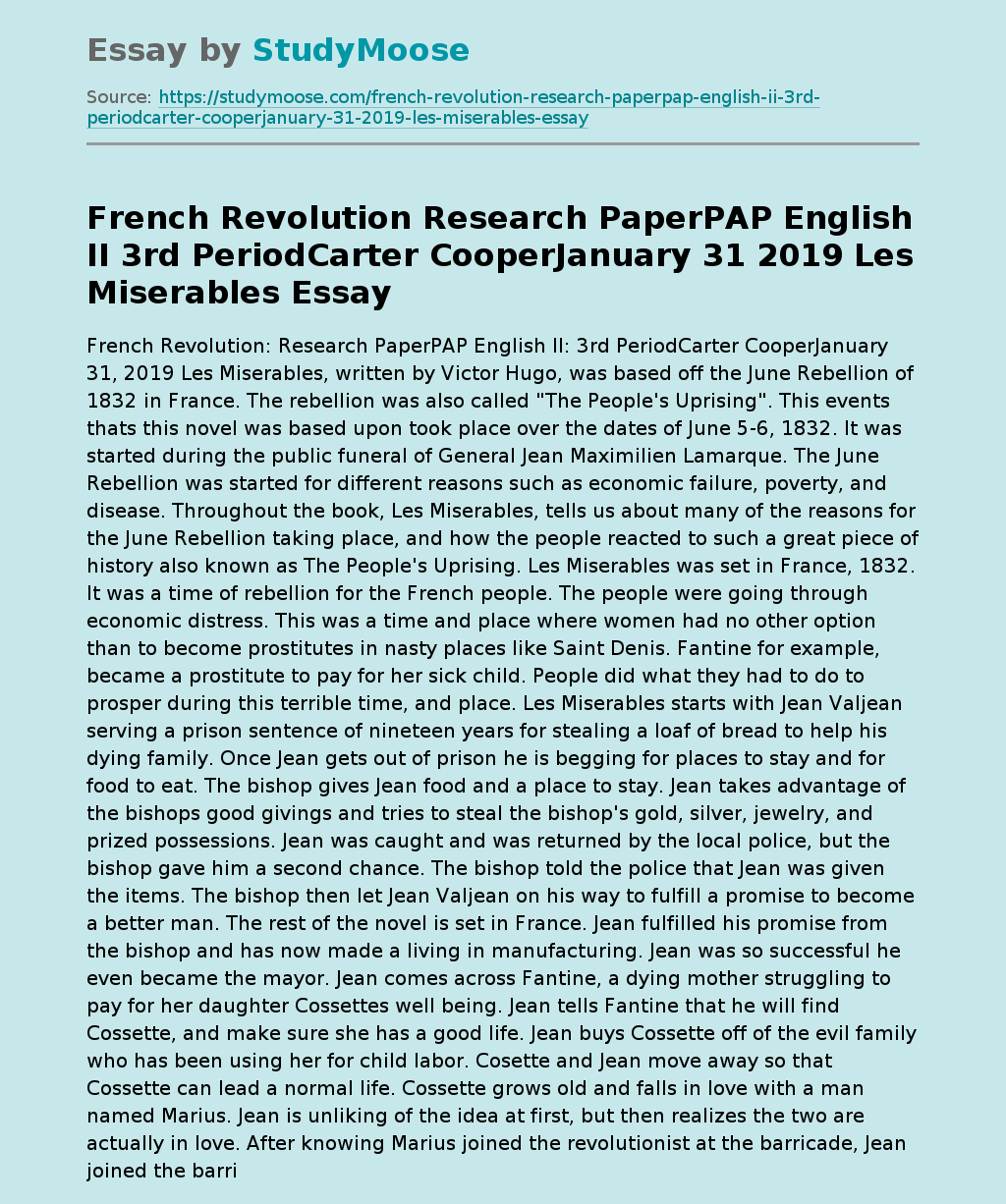