French playing cards are most famous deck of card game.The total number of series in French suits are thirteen for each of the suit : clubs (♣), diamonds (♦), hearts (♥) and spades (♠), with different face cards. Every ace on card represents every symbol of its suit that is a king, queen and jack.These playing cards has signs on facing corners to identify them while overlapping .Sometimes the pattern of the French deck is called as “English” or “Anglo-American” pattern.

French cards are the most common playing cards worldwide.

Don't use plagiarized sources. Get your custom essay on
“ French Playing Cards ”
Get custom paper
NEW! smart matching with writer

The four card suits Hearts, Diamonds, Spades, and Clubs are the French design from the 15th century, but the idea of card suits is much older.

The record history of card playing begins in 10th-century Asia, from China or India, as a gambling game.Before the 14th century, this ideas found its way to ancient muslim world. The oldest deck of Muslim playing card had four suits Coins, Cups, Swords, and Polo Sticks.

This deck of cards was revealed in southern Europe and , these suits was changed to Scepters and Batonsa which are type of club.The major cause of changing these suits was that the polo sticks were unknown to Europeans.

The game is most likely German in origin. In 19th Century,the game became popular in France, England and America later. The earliest game of patience occurred in 1788 in the German game collection. Before this, there were not such games in large game summaries.

During the time playing cards became more popular different cultures created their own suits and their own “royalty” cards, sometimes with six different face cards.Intricate designs were made on both the suits and the royalty cards ny using hand painting techniques.But they were expensive to manufacture.In France, Parisian cardmakers settled on Spades, Hearts, Clubs, and Diamonds as the four suits. The first three suits were adapted fromthe German card suits Leaves, Hearts, and Hawk Bells.These cards were made for the French upper class because cardmakers used expensive Diamonds over common Acorns.

Some decks use four colors for the suits to identify them easily.The typical colors used in french suits are black for spades, red for hearts, blue for diamonds and green for clubs.In German suits spades are green, diamond sare yellow,hearts stay same in red and clubs are black.This color set of Germans was adopted after.The French cards were made by using single-color for the suits. These images were made by using simple stencils technique. In the 15th centuary these cards were cheap and oversupplied in the markets of England and then traveled to America.

The term Patience or solitaire is known in the US and Canada, which is a genre of card games that can be played by a single player. Patience games can also be played in a head-to-head mode and the winner is selected by a scoring scheme.The word solitaire is often used to refer to solitaire played with cards in US while in other countries solitaire refers to peg solitaire. Both Solitaire and Patience are sometimes used to refer to the Klondike form of Patience.Klondike is known form of solitaire card.The cross purpose of Patience is to manipulate the order of cards with an aim of sorting them in some manner.

Solitaire is a countertop game in which one can play by oneself. The word “solitaire” is also used for single-player games which is played by using an order of tiles, pegs or stones instead of cards. These games include peg solitaire and mahjong solitaire which is also known as Shanghai solitaire Most solitaire games looks like a puzzle game because of different starting point which may or may not be solved in a different way each time.

Patience games is all about dealing with cards from a shuffled deck into an order on a board, from which the player attempts to reorder the deck by suit and rank through a sequence by moving nad transferring cards from one place to another under limitations. Some games allow the reordering of the deck into new form.

In the most general form of Patience, the objective of the game is to build up four blocks of cards going from ace to king in each suit by taking cards from the layout if they appear on the table.There is a huge modification on the patience theme by using one or more decks of cards, with rules of intricacy and skill levels. Many of them are converted into electronic form and are available as computer games.

All Solitaire games are played with one or more 52-card packs. Usually Solitaire uses one 52-card pack.The first goal in this game is to turn out and play into that area with certain cards to build up each foundation according to the suit in sequence, from the ace over the king. So, the goal is to build the whole pack onto the specific areas, and if that is done, the Solitaire game will be won.

There are four types of piles in Solitaire:

The simple French suits were much easier to make because simple stamps can be used for the numbered cards rathar than the traditional woodcut method. Only the court cards in the French deck requires woodcut illustrations.

Playing cards are one of the perfect examples of symmetry in design that is ever found. This basic design has two purposes. First, it makes the cards quite attractive. Symmetry is attracted to both nature and art. Its simple with the numbered cards, but the symmetry continues into the “court” cards, which modern players commonly refer to as face cards.

Court cards were created as full length character illustrations, the symmetry was added as an improvement around the middle of the 19th century.
And then numbers and letters were added at the corners, which made their way into American decks in 1875. This design let the players hold the cards in a single hand instead of holding them in in both hands which is a major improvement.
In the past, the Jack card was indicated as a “Knave” or “Knight.” It caused a problem in the indication of “K” which appear on both the Knight and the Knave. At this point, the card was changed to a Jack to avoid this confusion.

As playing cards derives, the royal figures on specific personalities. Popular figures of royal family were chosen and referred to each court card. The image shows the kings, David, Charles, Julius Caesar and Alexander the Great. As well as the queens of spades, hearts diamonds and clubs and their names were printed on the old cards, but now these personalities aren’t really considered in any way.

Another interesting fact, the Jack of Spades, Jack of Hearts, and the King of Diamonds represents figures it means we see one side of their faces. That is why it is called “One-eyed Jacks” and “One-eyed Royals.”The other court cards shows front-facing in which figure is still looking left or right but shows both eyes. The one-eyed cards are more easy to understand in certain games.In the four court cards which are black, are looking to the right. The other eight cards look to the left.

The Ace of Spades 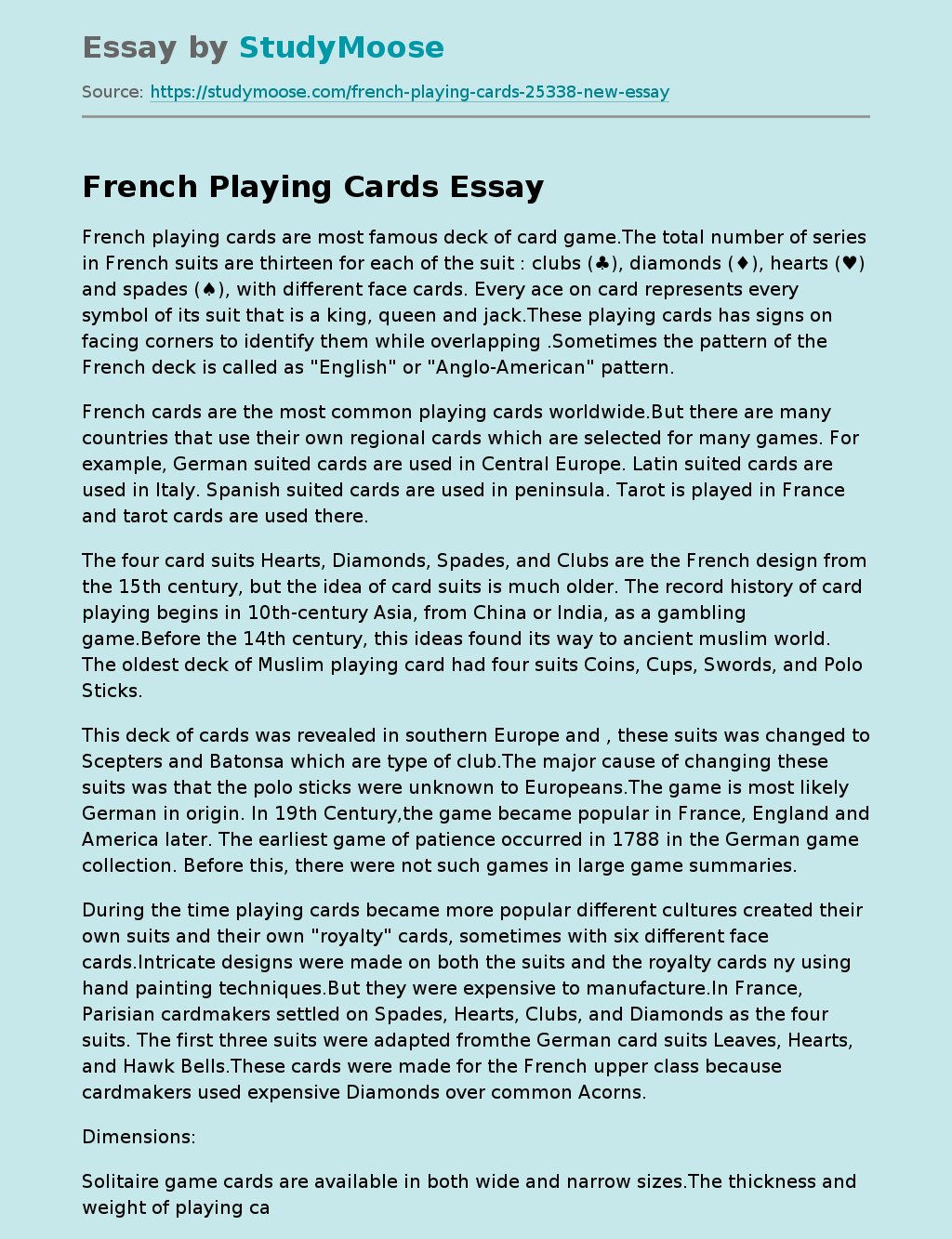