The natural and reoccurring aspect of life, change, is one that has positive outcomes and cannot be reversed. The outcome of how change affects a person can be modified due to extrinsic factors of people or place. The inevitability of change can be daunting or reassuring for a person, depending on the way it is embraced. Humans change their perceptions of the world due to what they are subject to. Ones extrinsic factors and how they see the world is constantly shaping their intrinsic factors and his manipulating the ideologies of the forever developing human mind.

As individuals, people continue to grow and mature due to how they lead their life. This Change can be seen in the Richard Lagravanese’s composed Freedom Writers, The students undergo a significant change in perspective that breaks down the cultural barriers between the students and opens their minds. This is due to the supreme catalyst figures of Erin Gruwell and also Miep Gies. Place is also a key factor in the sculpting of one’s perspective and the Holocaust Museum The students venture to is a momentous place that furthers their change in perspective.

In the film The Composer supports this message through various film and language techniques. The student’s Teacher Erin Gruwell was the driving force behind the student’s positive change in perspective toward life, education and their fellow peers. Her enthusiastic attitude toward her students and job give her students the best chance in life. In the first scene we see Erin at the school, she confesses to the English Coordinator she “chose Wilson because of the Integration program” and is clear on her teaching goals that “by the time you’re defending a kid in the courtroom, the battles already lost… he real fighting should happen here in the classroom”.

This shows her enthusiasm for teaching and the composer juxtaposes Erin with the Margret (English coordinator) as Margret is now an outdated teacher who sees the children as no more than scores on paper. Erin’s bright radiant blue and red clothes and attitude portray her mind-set and the reoccurring motif of the pearls her father bought her are also present as a close up camera angle is used to show them. Erin meets resistance from the students in room 203 during their first lesson as they show her no respect by arriving late to class and apathetic.

The dialogue intensifies the idea of them being apathetic and shows they lack inner belief, “this is the dumb class” and their body language furthers this, Marcus is eating in class. The Camera angles the composer has used always shows Erin isolated from the class, signifying her lack of control. In the line Game scene, Erin Finally breaks down the barriers dividing them through the confronting questions she asks them, “Step up to the line if you have lost a friend to gang violence”.

As the students realise the similarities they share they start to open up and become more understanding of each other. Erin takes them on a self funded school trip letting them know they are worth more than the give themselves credit. After this scene the students start to write positive and optimistic thoughts in their diary. One student writes in their diary “Miss G had a beautiful dinner for us”. Erin Does an implausible job at opening the students minds on education and other racial clans and providing them with their own “kicking spot” where they can escape the dramas of life and be themselves.

Erin Met quite a lot of resistance from Eva, who expressed hate for Erin on multiple occasions during the film, until eventually Erin and Eva sat holding hands after Eva, showing the connection they had now established. Another life she gets back on the right track is Andres, as after he is completely isolated from all of his family, he stops attending class and reunites with drug dealing. Erin uses tough love on Andre to get his perspective back on track; she says “i know what you’re up against”.

Andre sheds a single tear which represents him returning to his former functioning life. As the students have now opened up to Each other and start to build relationships between themselves, they are provided with more stimulus to change their perspective on their life, education and their viewpoint on other racial groups in the form of Miep Gies. As the students listen to her story, their attention is engulfed in her and they realise that the problems they are facing are pedestrian to that of what Miep faced. A man pointed a gun at me… and put it against my head” she said. There is sad and quite non-digetic music played during her story to intensify the depression of the time. During her speech there was numerous close up camera shots of the students faces and their facial expressions as they were taking all the information in, however the camera kept showing Eva, it showed her face when Miep said “I did what I had to do, because it was the right thing to do”.

In the next scene Eva Testified in court against “her own” Because of the influence of Miep Gies’ speech and when she saw the innocent defendants family which reminded her of what she had to face many years before. The surroundings of a person go a long way in shaping their perspective, ideas on life and opening their minds, The Holocaust museum that Erin took the students too played a huge factor in changing their perspective. They Realise that the opportunity for education they are being given is very valuable and they are not utilising the opportunity as not everyone is as lucky as them.

The students are really taken back from all the pictures of the affected children. The lighting the composer has used is all dark, black in some spots to exaggerate the sorrow during the visit to the museum and the photos of the children affected by the holocaust are a contrast to this as they are bright, to bring attention to them and show their innocence. The students feel so sad at the experience because they can relate to the holocaust victims, “I’ll never forget those people” Andre states.

The important and unavoidable feature of the world, change, has lasting effects on people that can be beneficial and positive. The fact that the world a person lives in can mould them into something more is a prosperous idea. Its positive outcomes arise from significant aspects of people and place. As a person, one repeatedly embraces change as they thrive off the endless possibilities of the outcome. Richard Lagravanese’s Freedom Writers is a perfect representation of this idea. 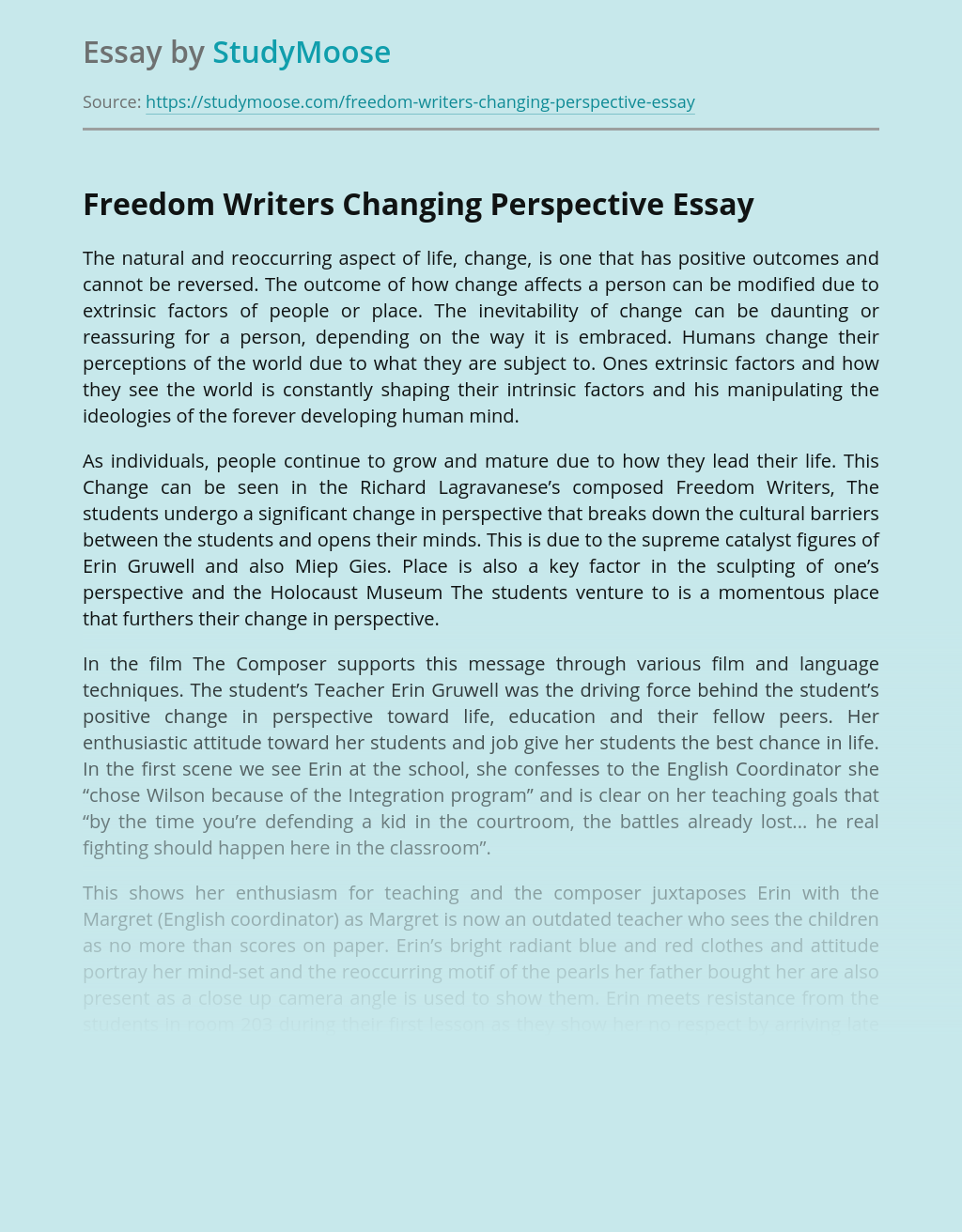