Sarojini Naidu, (born as Sarojini Chattopadhyaya/ সরোজিনী চট্টোপাধ্যায় ) also known by the sobriquet as The Nightingale of India,[1] was a child prodigy, Indian independence activist and poet. Naidu was one of the formers of the Indian Constitution. Naidu was the first Indian woman to become the President of the Indian National Congress[2] and the first woman to become the Governor of Uttar Pradesh state. Her birthday is celebrated as women’s day all over India.

Sarojini Naidu was born in Hyderabad to a Bengali Hindu Kulin Brahmin family to Aghore Nath Chattopadhyay and Barada Sundari Debi on 13 February 1879.

Her father was a doctor of Science from Edinburgh University, settled in Hyderabad State, where he founded and administered the Hyderabad College, which later became the Nizam’s College in Hyderabad. Her mother was a poetess and used to write poetry in Bengali. Sarojini Naidu was the eldest among the eight siblings. One of her brothers Birendranath was a revolutionary and her other brother, Harindranath was a poet, dramatist, and actor.

Sarojini Naidu passed her Matriculation examination from the University of Madras. She took four years’ break from her studies and concentrated upon studying various subjects. In 1895, she travelled to England to study first at King’s College London and later at Girton College, Cambridge. Career

P. Ramaswami Iyer, Mahatma Gandhi and Jawaharlal Nehru.[4] During 1915-1918, she travelled to different regions in India delivering lectures on social welfare, women empowerment and nationalism. She awakened the women of India and brought them out of the kitchen. She also helped to establish the Women’s Indian Association (WIA) in 1917.[5] She was sent to London along with Annie Besant, President of WIA, to present the case for the women’s vote to the Joint Select Committee.

President of the Congress

In 1925, Naidu presided over the annual session of Indian National Congress at Cawnpore. In 1929, she presided over East African Indian Congress in South Africa. She was awarded the hind a kesari medal by the British government for her work during the plague epidemic in India.[6] In 1931, she participated in the Round table conference with Gandhiji and Madan Mohan Malaviya.[7] She played a leading role during the Civil Disobedience Movement and was jailed along with Gandhiji and other leaders. In 1942, she was arrested during the “Quit India” movement.

Naidu began writing at the age of 13. Her Persian play, Maher Muneer, impressed the Nawab of Hyderabad. In 1905, her collection of poems, named “The Broken Exes” was published.[8] Her poems were admired by many prominent Indian politicians like Gopal Krishna Gokhale. Golden Threshold

Named “Golden Threshold” after Sarojini Naidu’s much celebrated collection of poems, this premise has a long and wider history. This was the residence of her father, Dr. Aghornath Chattopadhyay, the first Principal of Hyderabad College, later named Nizam College. This was the home of many reformist ideas in Hyderabad – in areas ranging from marriage, education, women’s empowerment, literature and nationalism –apart from being the home of brilliant, radical and creative members of the Chattopadhyay family, which included the anti-imperialist revolutionary Birendranath; maverick poet, actor and connoisseur of music and dance Harindranath; dancer and film actress Sunalini Devi; communist leader Suhasini Devi –and of course the poet, crusader for women’s rights, nationalist leader and ‘Nightingale of India’ Sarojini Devi.

Harindranath Chattopadhyay said about this house, where anyone and any ideas were welcome for discussion, “a museum of wisdom and culture,a zoo crowded with a medley of strange types – some even verging on the mystique”. Golden Threshold now houses Theatre Outreach Unit an initiative of University of Hyderabad started in August 2012.

During her stay in England, Sarojini met Dr. Govindarajulu Naidu, a non-Brahmin and a doctor by profession, and fell in love with him. After finishing her studies at the age of 19, she got married to him during the time when inter-caste marriages were not allowed. Her father approved of the marriage and her marriage was a very happy one.[3] The couple had five children. Jayasurya, Padmaja, Randheer, Nilawar and Leelamani. Her daughter Padmaja followed in to her footprints and became the Governor of West Bengal. In 1961, she published a collection of poems entitled The Feather of The Dawn.[9]

In 1949 she fell ill. Her physician arrived quickly and gave her a sleeping pill to reduce her pain. As he gave the pill, she smiled and said “Not eternal sleep, I hope”. But that night (on March 2, 1949) she died in her sleep becoming a “Nightingale of Heaven and God”- Noble Works

Each year links to its corresponding “year in poetry” article: 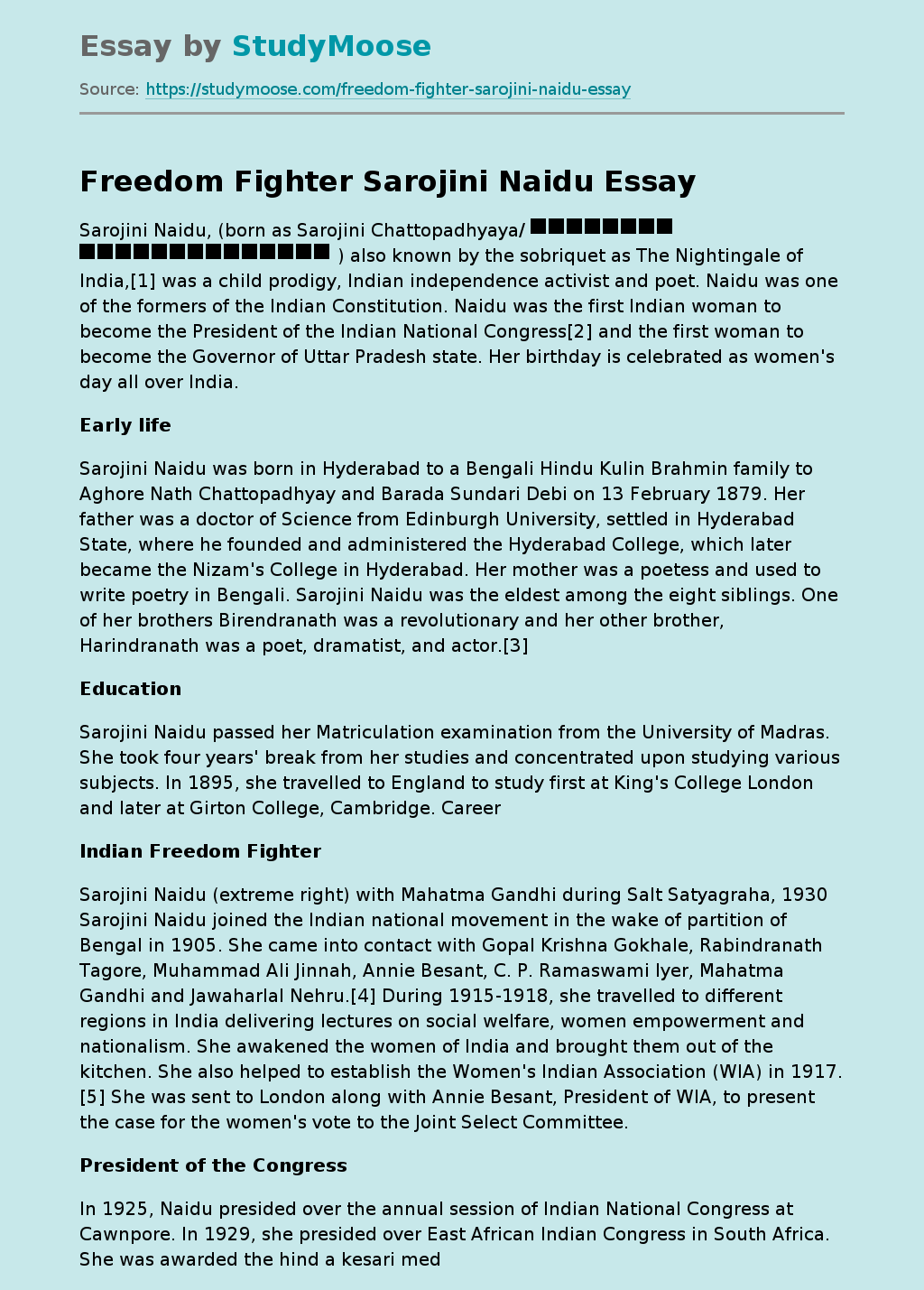