Free Will vs Fate in Sophocles’ “Oedipus Rex”

In life it is possible for there to be a fine balance between fate and free will. Free will depends on whether one determines to do something while fate is the destiny that is pre-planned for someone, however it is up to that person to do something with it. Sophocles’ “Oedipus Rex”—an Athenian tragedy that was performed around 429 B.C.— discloses a paramount relationship of man’s free will existing within destiny, something that the Greeks believed to completely guide the universe in a congruous purpose.

Don't use plagiarized sources. Get your custom essay on
“ Free Will vs Fate in Sophocles’ “Oedipus Rex” ”
Get custom paper
NEW! smart matching with writer

Although Oedipus was a victim of fate, he was not dominated by it. Oedipus was destined from birth to someday murder his father and sleep with his mother. Both the concept of fate and free will played a constitutive role in Oedipus’ destruction. His fate was absolute and inescapably would befall, no matter what he attempted to do to fight it. His past actions were determined by fate, however the decisions that were made in Thebes, were made of his own will.

Since the commencement of the tragedy, Oedipus made many decisions that led to his own downfall. For example, Oedipus could have permitted for the plague to pass, but instead, from clemency to his suffering people he instructed Creon to go to Delphi. Upon learning Apollo’s word he states “Upon the murderer I invoke this curse- whether he is one man and all unknown, or one of many- may he wear out his life in misery or doom! If with my knowledge he lives at my hearth, I pray that I myself may feel my curse.

” 1 While Oedipus could have peacefully scrutinized the former King Laius’ murder he instead, out of expedition, passionately curses the murder and without notice inadvertently curses himself.

In addition for the audience to relate to the chief figure, the character had to have some type of flaw. This invokes the audience the fear that it could happen to them as well. Oedipus most certainly did not lack any flaws. His disbelief in the gods, insolence, pride, ignorance, and implacable hunt for the truth contributed to his destruction. When Oedipus was told that he himself had murdered Laius, he became extremely infuriated and claimed that the oracle was a fabulist. He fled from his home, in aspiration of escaping the Gods’ divine will. Similar to his father, Oedipus endeavored greatly for ways to abscond the horrifying destiny that was for told by Apollo. The chorus warns us “If a man walks with haughtiness of hand or word and gives no heed to Justice and the shrines of Gods despises- may an evil doom smite him for his ill-starred pride of heart! – if he reaps gains without justice and will not hold from impiety and his fingers itch for untouchable things. When such things are done, what man shall contrive to shield his soul from the shafts of the God?” (Sophocles). In warning the audience the chorus discloses a man’s need to have high esteem for the gods, and the dangers of experience too much pride. They claim that with “haughtiness of hand or word” one can find themselves in much trouble or even be the cause themselves of the trouble they may find themselves in.

Moreover, Oedipus’ uncompromising yearning to disclose the veracity about the murder of Laius, and the enigma of his own birth, led him to the horrific recognition of his horrendous deeds. The herdsmen, Jocasta, and Teiresias attempted halt him from divulging the truth. For example the conversation between Jocasta and Oedipus. After Jocasta came to the realization that the prophecy was true, she begged Oedipus to just let the enigma go. “I beg you- do not hunt this out- I beg you, if you have any care for your own life. What I am suffering is enough” (Sophocles). Oedipus then replies, “I will not be persuaded to let chance of finding out the whole thing clearly” (Sophocles). Oedipus is incapable of halting before the hunt of veracity, even upon Jocasta’s supplications. He acclaims to his own responsibility of solving the final riddle, the riddle of his own life.

Additionally, when discovering the veracity of his birth from the herdsman, Oedipus cries, “I who first saw the light bred of a match accursed, and accursed in my living with them, cursed in my killing” (Sophocles) Oedipus completely acknowledged that his fate had certainly transpired and felt cursed by it. The chorus then sings “What man, what man on earth wins more happiness than a seeming and after that turning away? Oedipus you are my pattern of this, Oedipus you and your fate! Luckless Oedipus, whom of all men I envied not at all” (Sophocles). In singing this the chorus portrays an ode on the despondency of life and the disastrous destiny to which even the most reverenced, like Oedipus are eventually subject to.

In the end of this tragedy, when Oedipus excavates his eyes out, the chorus then questions him as to what god exhorted him to blindness. Oedipus then replied, “It was Apollo, friends, Apollo, that brought this bitter bitterness, my sorrows to completion. But was the hand that struck me was none but my own” (Sophocles). He asserted full culpability for his decisions. Oedipus was culpable for the murder of his father and marrying his mother, but ultimately the verity sin lay in his over fervent attempt to put himself at the level of the gods by striving to escape his fate. The chorus sings that in affluence, he was begrudged by all men, he was venerated highest above all reverences, and how he obtained elation by pride (by slaughtering the Sphinx, and by trying to deceive the god’s will.) But ultimately, Oedipus was surmised for it, causing a reversal of fortune in his prosperous life.

Oedipus’ intentions for wedding his mother and murdering his father, does not take away from the atrociousness of the misdeeds. In tearing up, Oedipus was acknowledging the full culpability of his acts and knew that he was to be punished for his sins. Therefore the last act of demolition was caused by Oedipus’ free will, but his cataclysmic destiny came due to the nature of fate — that every sin must be punished — and the mantle of the gods in eventualities of man kind.

The chorus concludes “You live in my ancestral Thebes, behold this Oedipus,- him who knew the famous riddle and was a man most masterful,- not a citizen who did not look with envy on his lot-see him now and see the breakers of misfortune swall him! Look upon that last day always. Count no mortal happy till he has passed the final limit of his life secure from pain” (Sophocles). In stating this the chorus warns the Greeks, that the only way to pursue elation in life is through humbleness and esteem upon the gods, — the very qualities that Oedipus lacked, and eventually led to his destruction — They also warn not to take anything for granted or permit themselves undergo through a fate like that of Oedipus.

Conclusively, the audience receives a warning through Oedipus in the story against pride. Oedipus’ great prosperity would have been unfeasible had he not been egotistical and sure of his actions, but the tragedy of his destiny may have been avoided had he listened to those around him.

Free Will vs Fate in Sophocles’ “Oedipus Rex”. (2021, Mar 25). Retrieved from http://studymoose.com/free-will-vs-fate-in-sophocles-oedipus-rex-essay 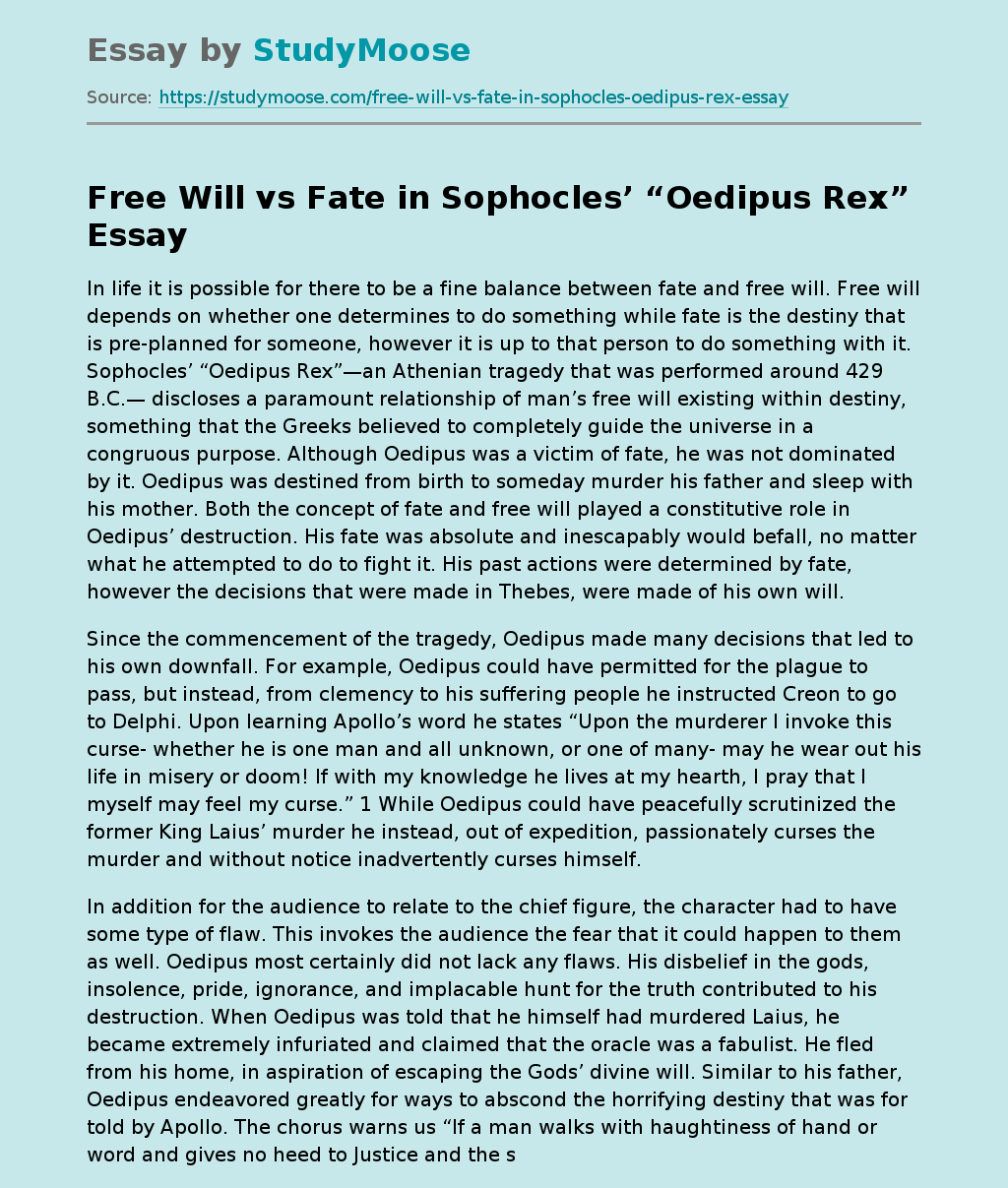