It was Glen Meakem who founded FreeMarkets in Pittsburgh, Pennsylvania in 1995. He always has been attracted by the entrepreneurial adventure. After he finished his degree he get a job in a consulting firm named McKinsey & Co he was specialized in industrial sourcing and commodities trading. There he discovered that it was really difficult for companies to “identify truly high quality suppliers while also established fair market price”. Then, Meakem moved to fortune 500 company as manager of the corporate Business department group.

There he experienced the concept of negotiation by “silent auctions”: All the suppliers for a same product gathered together in an Hotel Ball room and set up the price by putting their bid on a flip chart. This experience sparked the idea of FreeMarket online in Meakem’s mind. He decided to launch a startup that would run the inefficient and costly process of the company/supplier partnership over the Internet. Meakem believed there were many reason a buyer would find value this kind of auctions:

He started to develop his concept in the company he worked but he quickly figured out that some important groundwork had to be plan and it would be better if he did it by is own. Thus he decided to leave the company and moved to his basement in Pittsburg to build FreeMarket Online. To run this project he decided to be associate with Sam Kinney, a former friend from McKinsey & Co. They worked hard together to achieve the software aspect of the company, and by October 1995 they launched BidWare and BidServer the two computer programs needed to run their project.

They achieved their final goal by November 1995 by conducting a live bid for $3,2 million worth of injection-molded plastic appliance part. The company started to be successful in 1997 because of its revenues of $1. 8 million and in the next year their company’s monthly revenues were sufficient to cover its $300,000 monthly burn rate. The revenues start to grow up because of the main competitive advantage of FreeMarkets Online that was the fact they serve their clients very well, and they trust them in return.

The company sold it services with the direct sales model. This direct model consists of high bandwidth clients developers networking into an establishing relationship with senior level purchasing operations and finance executives at large targeted corporations”. Market description FreeMarket Online use E-commerce technology and services for the procurement of industrial parts, raw materials, commodities and services. “Freemarkets combines its biding platform with information on the procurement, or sourcing of direct materials, commodity-specific domain knowledge and services to deliver measurable savings to customers.

FreeMarket online is Business-to-business oriented this market is really wide, in fact, In the U. S. alone, some $600 billion worth of industrial intermediate components are sold each year. The average U. S. manufacturer spends some 55% of sales on direct material purchases. Direct materials are the raw materials and component parts that become an integral part of finished products and can be traced directly to finished goods. Three different entities could be spot on the “FreeMarket” online market:

This three segment respond to the wish of Meakem and Kinney to focus on selling products which are not, too sophisticated or not too common. According to Meakem: “The technique is most successful when the product is specifiable, when competition among suppliers is sufficient and when the buyer’s purchase is large enough to stimulate the competition”. Problem Statement (SONIA) FreeMarket Online has to position itself both with clients and the capital market, and also find a strategic direction for the company. FreeMarket management must decide which strategic opportunities they should follow in order to increase its revenues.

Without a SWOT analysis they cannot identify the internal and external factors that affect the company. Finance is another problem the company has to face because of the increase of the operational and administrative costs. For that reason its net income was negative.

In general the company has improving its revenues each year thanks to the research, investment and software development for the industrial marketplace, increasing its suppliers and benefits for its customers. However the company had a lot of operational and administrative cost, obtained a negative net income because the expenses are higher than revenues. 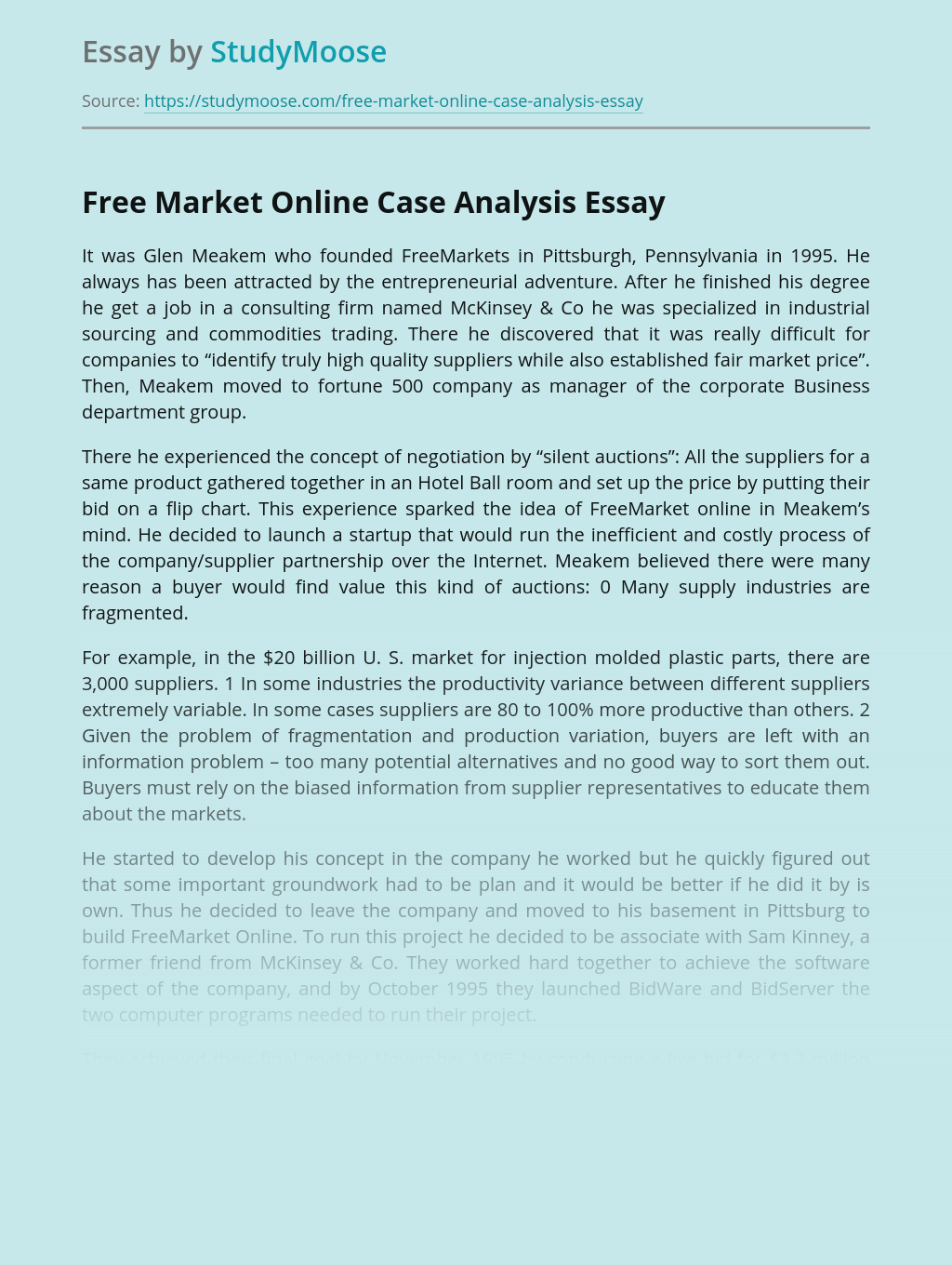 Don’t waste time
Get a verified writer to help you with Free Market Online Is For Fair Market Price
Hire verified writer
$35.80 for a 2-page paper
Stay Safe, Stay Original