In the Narrative of the Life of Frederick Douglass, an American slave, Douglass describes the dehumanization of both slaves and slave owners. Many slaves were dehumanized by getting beat, raped and even killed. He has seen many horrid things like the incident with Denby’s death and how he had to fight over scraps of food. Douglass not only describes the dehumanization of the slaves, he also talks about how it also changed many of the slave owners that he had encountered.

Don't use plagiarized sources. Get your custom essay on
“ Frederick Douglass: Life of an American slave ”
Get custom paper
NEW! smart matching with writer

The first time Douglass sees the dehumanization of the slave owners was when he met Mrs. Auld. She had never owned a slave before so she treated him with respect and with kindness. At first, Mrs. Auld is described by Douglass as angelic, kind, and humble. She taught him the alphabet and how to read. Frederick said, “When I went there, she was a pious, warm, and tender-hearted woman. There was no sorrow or suffering for which she had not a tear.

She had bread for the hungry, clothes for the naked, and comfort for every mourner that came within her reach.”(pg. 82) However, her husband scorned her for teaching a slave how to read. He influenced her with his corrupt mindset about treating slaves and changed Mrs. Auld from “Angelic” to “demonic” as Frederick described. He said, “Slavery soon proved its ability to divest her of these heavenly qualities. Under its influence, the tender heart became stone, and the lamblike disposition gave way to one of tiger-like fierceness.

This shows how immensely Mrs. Auld was changed just by her husband commanding her and telling her what was right in his mind. Once she discovered this new found power, that she has power over another human being, she used it to her advantage and went from being the nice lady that taught Douglass how to read to the lady that would punish him if she caught him reading. Another example of the dehumanization of the slave owners is Mr. Covey. He was a very religious man and was also nicknamed the “n****r breaker” because all the slaves that went to him, he emotionally broke, leaving their life even more depressing and gloomy. Mr. Covey was proud of his nickname and cared very much for his reputation.

It says in the novel, “Added to the natural good qualities of Mr. Covey, he was a professor of religion — a pious soul — a member and a class-leader in the Methodist church.”(Pg. 101) Covey was devoted to religion and breaking his slaves to build on his reputation that he has. The dehumanizing part is that he likes what he does and how he beats the poor slaves. The novel states, “My natural elasticity was crushed, my intellect languished, the disposition to read departed, the cheerful spark that lingered about my eye died; the dark night of slavery closed in upon me; and behold a man transformed into a brute!” this shows how cruel Mr. Covey is that he made Douglass “transform”. Everything that he learned went away, his slight sense of joy if there was any was now wiped away from him. Douglass also talks about the dehumanization of the slaves.

Branching off from Mr. Covey, Many women slaves were dehumanized by being “baby machines.” Mr. Covey bought a women slave, Caroline, and her only job was to breed with another man which was Samuel Harrison which was a married man. This is very contradictory because Covey claims to be a man of god when he is doing things like this. Another example of the dehumanization of slaves was when Douglass and his mother were separated when he was born. The slave owners didn’t want them to gain affection with each other because they thought it would distract them from working. In the novel it says, “I do not recollect of ever seeing my mother by the light of day. She was with me in the night. She would lie down with me, and get me to sleep, but long before I waked she was gone.”

This shows how his mother would walk all the way to another plantation just to see him at night when he was sleeping because she loved him very much. It was very dehumanizing when Douglass described what kind of food they had to eat, “We were not regularly allowanced. Our food was coarse corn meal boiled. This was called MUSH. It was put into a large wooden tray or trough, and set down upon the ground.” He later describes how the children were called to eat the mush like pigs and how they had to fight over the little they had. It was the survival of the fittest. As you can see, dehumanization had an effect on the slaves by destroying them physically and mentally, making them depressed and malnourished, and in some cases, dying. There were also effects on slave owners but not as bold as the ones slaves endured. Mrs. Auld went from being a nice, angelic lady who was nice to everyone and everything to cruel and punishing. 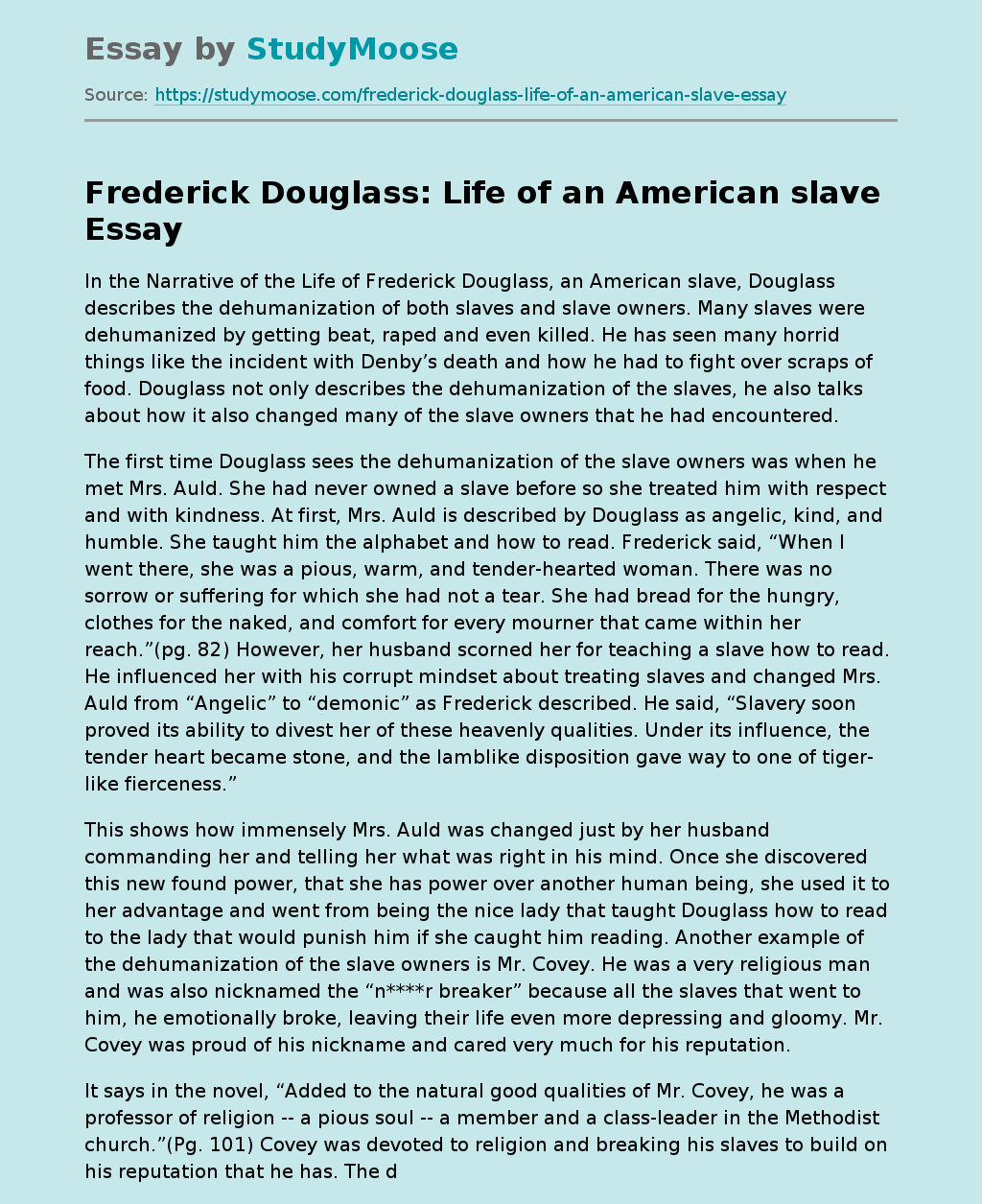