Metamorphosis. This means a change in form, structure, or appearance. Change is a major theme throughout Franz Kafka’s novella, The Metamorphosis. There is a significant relationship between the title, The Metamorphosis, and the theme of change. Kafka’s main character, Gregor Samsa, undergoes many changes and his transformation evokes change in his family. Several metamorphoses take place involving Gregor. First, a physical change occurs “When Gregor Samsa woke up one morning from unsettling dreams, he found himself changed in his bed into a monstrous vermin.

” After that happened, Gregor’s voice changes from human into the voice of a bug.

“That was the voice of an animal,” Gregor’s manager said, but the words seemed perfectly clear to him. Beginning to see things less and less, Gregor experiences a change in his vision. An example, found on page 29, would be Gregor seeing the hospital less and less distinctly. A mental change in Gregor occurs when he starts not caring about or having no consideration for his family.

” It hardly surprised him that he was showing so little consideration for the others; once such consideration had been his greatest pride.” Everyone in the Samsa family experiences changes brought on by Gregor’s metamorphosis. Since Gregor’s physical change renders him no longer able to work, the family’s financial situation changes. Gregor’s mother, father, and sister have to get jobs.

His sister, who took a job as a salesgirl to help the family, also learns French in the evening so she might get a better position in the future. Mr. Samsa, Gregor’s father, takes a job as a messenger for banking institutions. Turning into a bug, Gregor causes a lack of harmony among the family members. They keep away from him and will not even look at him. Now, because they are afraid of Gregor, at least two people always stay home together. Lifestyles that they used to have change. No maids want to stay. “…On the very first day the maid- it was not completely clear what and how much she knew of what happened- had begged his mother on bended knees to dismiss her immediately..;” (26) Besides that, the necessity arises to rent rooms out to three borders to add to their income. Grete, willingly at first and unwillingly at the end, does everything for Gregor, such as clean his room and give him his food. After the death of Gregor, the family’s feelings change from despair to hope and happiness.

Death brings about a positive change in the way they now see Grete, as compared with the way they perceived her when Gregor was alive. Now to them Grete “… had blossomed into a good looking good-looking, shapely girl.” (58) Also, they wish to marry her off. In addition they plan to move into a new, more manageable home in which they can find relief. As the seasons bring life and death changes in the world of nature, so to in this story, does the life and death of Gregor Samsa bring profound changes not only to him as an individual but also to the lives of the others around him. 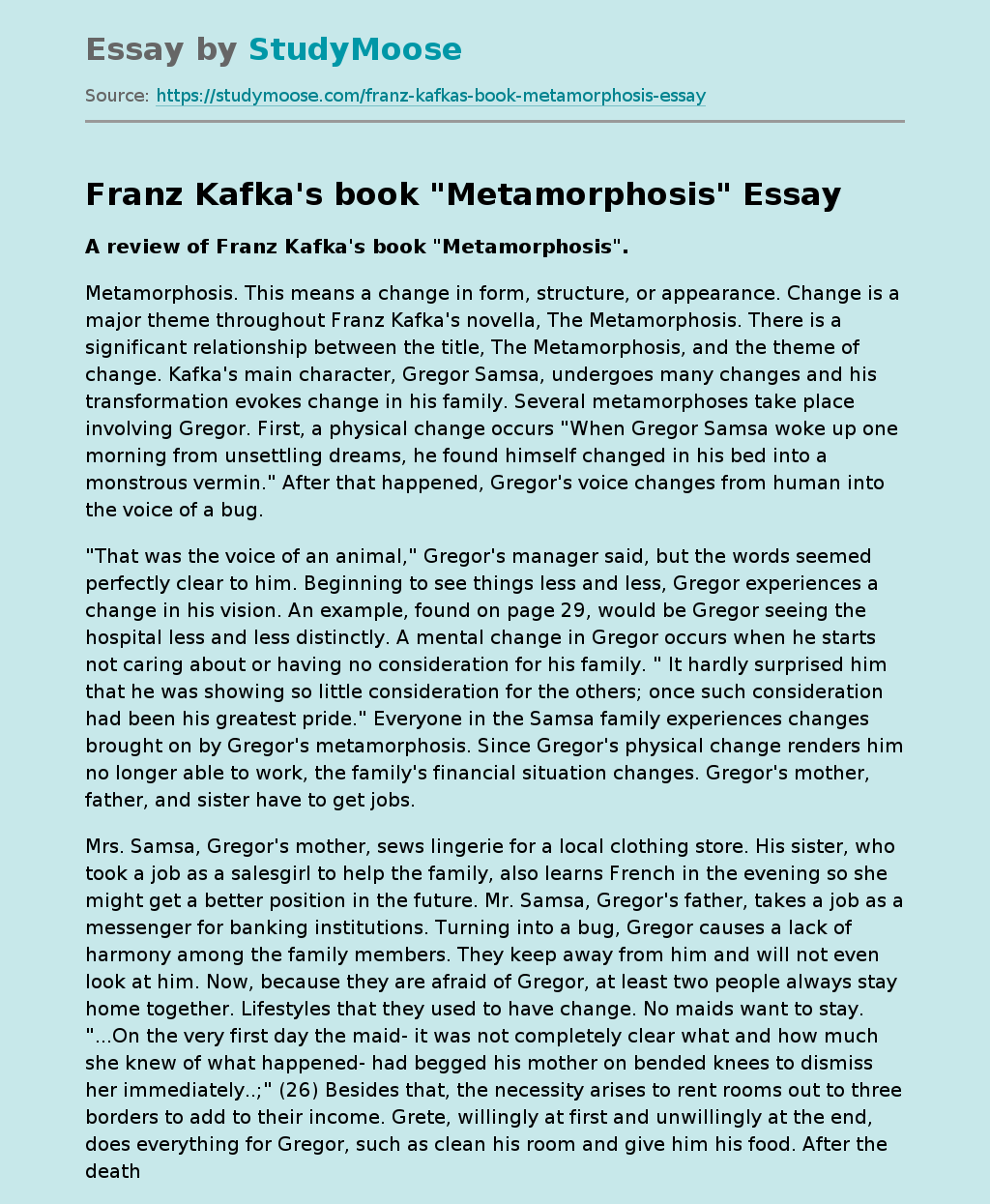