Franklin D. Roosevelt was the 32nd president of the United States.

Turn in your highest-quality paper
Get a qualified writer to help you with
“ Franklin D. Roosevelt Vs. Abraham Lincoln ”
Get high-quality paper
NEW! AI matching with writer

He became president in March of 1933. He led a big part in the World War Two . He died while he was still in office on April 12 1945 of a cerebral hemorrhage.

Abraham Lincoln was the 16th President of the United States. He became president on November 6, 1860. He helped free the slaves and he was a great speech and poem writer. He was murdered when he went to a play on April 14, 1865, with a gun shot to his head.

The comparison of these two presidents early life is not really good comparison, But let me tell you the similarities. They both went to school and got an education. They loved to read and they preferred learning to working physical labor. They both would set there and read a book–after a book–after a book. This led to a difficult relationship with their fathers, who was just the opposite. Abraham and Franklin were constantly borrowing books from the neighbors. They both lived a sheltered life and never really got into big trouble.

They were both Tall, handsome, athletic, and outgoing. They loved to go outside and play with the neighbors or just go out side and play by themselves Abraham and Franklin both moved around when they were little. They both adapted to their environment quickly. It never seemed to bother them. They both had to go threw the feeling of losing a member of their family at such a young age.

The differences of Abraham and Franklin’s childhood were not much of a difference, But there was some differences Abraham was taller than all of the men in his neighborhood and Franklin was tall, but he wasn’t taller than everyone else. Abraham loved to go out and help his dad chop wood or do any other chore that was needed to be done around the house. But Franklin on the other hand, He would help his dad and his mom but, he would rather read a book or go outside and play. Franklin went to a prep school, while Abraham went to a school that all you did was study at your own pace and and work indivitualy. This school was more like independent studies, yet, it wasn’t for bad children.

“When Abraham was around 9 years old, his mother; Nancy Hanks Lincoln, died from milk sickness, a disease obtained from drinking the milk of cows which had grazed on poisonous white snakeroot.” (1) His sister, also died, But she died from childbirth. As you can see, Abraham went threw allot of deaths as a young boy. He had to deal with the mental pain of all of these feelings that come along with death. Roosevelt never had to go threw any deaths in tell he was much older.

When they started to grow up, they started to explore the world. Abraham started to travel. But Franklin was a student at Harvard University. Then he went to Law school, but he never graduated. In Springfield, Lincoln met Mary Todd. Three years later they were married and over the next 11 years had 4 children. Lincoln became a successful attorney, and the family bought a home on Jackson. In 1846 Lincoln ran for the United States House of Representatives and won. When he was in Washington he became known for his dedication to the Mexican War and to slavery. He returned home after his term and resumed his law practice more seriously than before.

Franklin married a distant cousin, Anna Eleanor Roosevelt, on Mar. 17, 1905. They had six children, but the sixth one died at birth. The Roosevelt’s were active in New York social circles and Franklin handled small-claims cases. He also won a seat as a Democrat in the New York state senate. Lincoln was against the spread of slavery into the territories but was not an abolitionist. He also ran for Senate, but someone else won. But after that, he gained national recognition. They both were trying really hard to get into politics, and they seemed to be doing fine. The Roosevelt name and his new image helped him win the Vice-Presidential nomination in 1920. The Democrats had little hope for him winning.

The number one similarity of these two presidents was that they were both presidents of the United States. Lincoln won on the 3rd ballot of the Presidential nomination in 1860. Lincoln was elected the 16th President on November 6, 1860. In 1930, Roosevelt began to campaign for the presidency. He started to run because the economic depression damaged Hoover, and it was a better chance for him to win. In 1932, Roosevelt won the nomination as the Democratic Party candidate for president. In November 1932, Roosevelt beat Hoover by seven million votes. They both wanted the best for the country and they tried their hardest to make the country the best it can be.

There are so many differences between the two Presidents and what they had to do when they were in office. Lincoln really didn’t have much to do compared to Roosevelt. Roosevelt ran four terms and he had to make decisions for World War Two. In taking office in 1933, Roosevelt had promised the United States to a “good neighbor” policy. He had carried out this pledge in Latin America. He tried to follow the policy of goodwill with all of the world. As war became more likely to happen in the 1930’s, both the president and the American public wished to remain neutral. But at the same time, Roosevelt did not want to see the aggressors get mad. War finally broke out in Europe when Germany invaded Poland in 1939.

Roosevelt wanted to help the democratic nations without bringing the United States into the war. But after a while, it was harder to keep the US out of the war. After the fall of France in 1940, Roosevelt rushed allot of weapons to Britain to help the British in the war against Germany. As you can tell, Roosevelt was a really busy man. Abraham on the other hand, Had a totally different kind of presidency. He played a big role in freeing slaves and he also gave really good speeches One of his favorite poems was: “Oh, why should the spirit of mortal be proud? Like a swift-fleeting meteor, a fast-flying cloud, A flash of the lightning, a break of the wave, He passes from life to his rest in the grave.

The leaves of the oak and the willow shall fade, Be scattered around, and together be laid; And the young and the old, the low and the high, Shall molder to dust, and together shall lie.

The infant a mother attended and loved; The mother that infant’s affection who proved; The husband, that mother and infant who blessed; Each, all, are away to their dwelling of rest.

The maid on whose cheek, on whose brow, in whose eye, Shone beauty and pleasure – her triumphs are by; And the memory of those who loved her and praised, Are alike from the minds of the living erased.

The hand of the king that the sceptre hath borne, The brow of the priest that the mitre hath worn, The eye of the sage, and the heart of the brave, Are hidden and lost in the depths of the grave.

The peasant, whose lot was to sow and to reap, The herdsman, who climbed with his goats up the steep, The beggar, who wandered in search of his bread, Have faded away like the grass that we tread.

The saint, who enjoyed the communion of Heaven, The sinner, who dared to remain unforgiven, The wise and the foolish, the guilty and just, Have quietly mingled their bones in the dust.

So the multitude goes – like the flower or the weed That withers away to let others succeed; So the multitude comes – even those we behold, To repeat every tale that has often been told.

They loved – but the story we cannot unfold; They scorned – but the heart of the haughty is cold; They grieved – but no wail from their slumber will come; They joyed – but the tongue of their gladness is dumb.

They died – aye, they died – we things that are now, That walk on the turf that lies over their brow, And make in their dwellings a transient abode, Meet the things that they met on their pilgrimage road.

Yea, hope and despondency, pleasure and pain, Are mingled together in sunshine and rain; And the smile and the tear, the song and the dirge, Still follow each other, like surge upon surge.

“˜Tis the wink of an eye – “˜tis the draught of a breath – From the blossom of health to the paleness of death, From the gilded saloon to the bier and the shroud Oh, why should the spirit of mortal be proud?” (2) The deaths of theis two presidents are very different. Let me tell you how they both happened. On Good Friday, April 14, 1865, the Lincoln’s went to a play called Our American Cousin at Ford’s Theater During the performance Booth arrived at the theater, entered the State Box from the back, and shot the Lincoln in the back of his head at about 10:15 P.M. Lincoln was carried across the street to the Petersen House where he passed away the next day at 7:22 A.M.

This was the first Presidential assassination in American history, and the nation mourned its leader. Lincoln’s body was taken to Springfield by train, and he was buried in the Lincoln Tomb in Oak Ridge Cemetery on May 4, 1865. Roosevelt’s health, which had been getting worse and worse ever since early 1944, did not improve. After returning from the Yalta Conference, he went to Warm Springs, Georgia, to rest. He was laying in bed on April 12, 1945 and he died he of a cerebral hemorrhage. As you can tell, The deaths of these two great men were very different and hard for the American people to handle, But they changed out history of our country in a big way.

In conclusion, You can see how these two president were so alike yet so different at the same time. I believe that we can learn so much from these two people and benefit off of it in a great deal. If more of our presidents would be more like these brave, kind, intelligent men; our world be in a lot better condition than it is today. If these two men were not in out history, I think that our whole life would be so different. And that’s in more ways that one. I hope you have learned a couple of things from this report. Because I know I sure have. 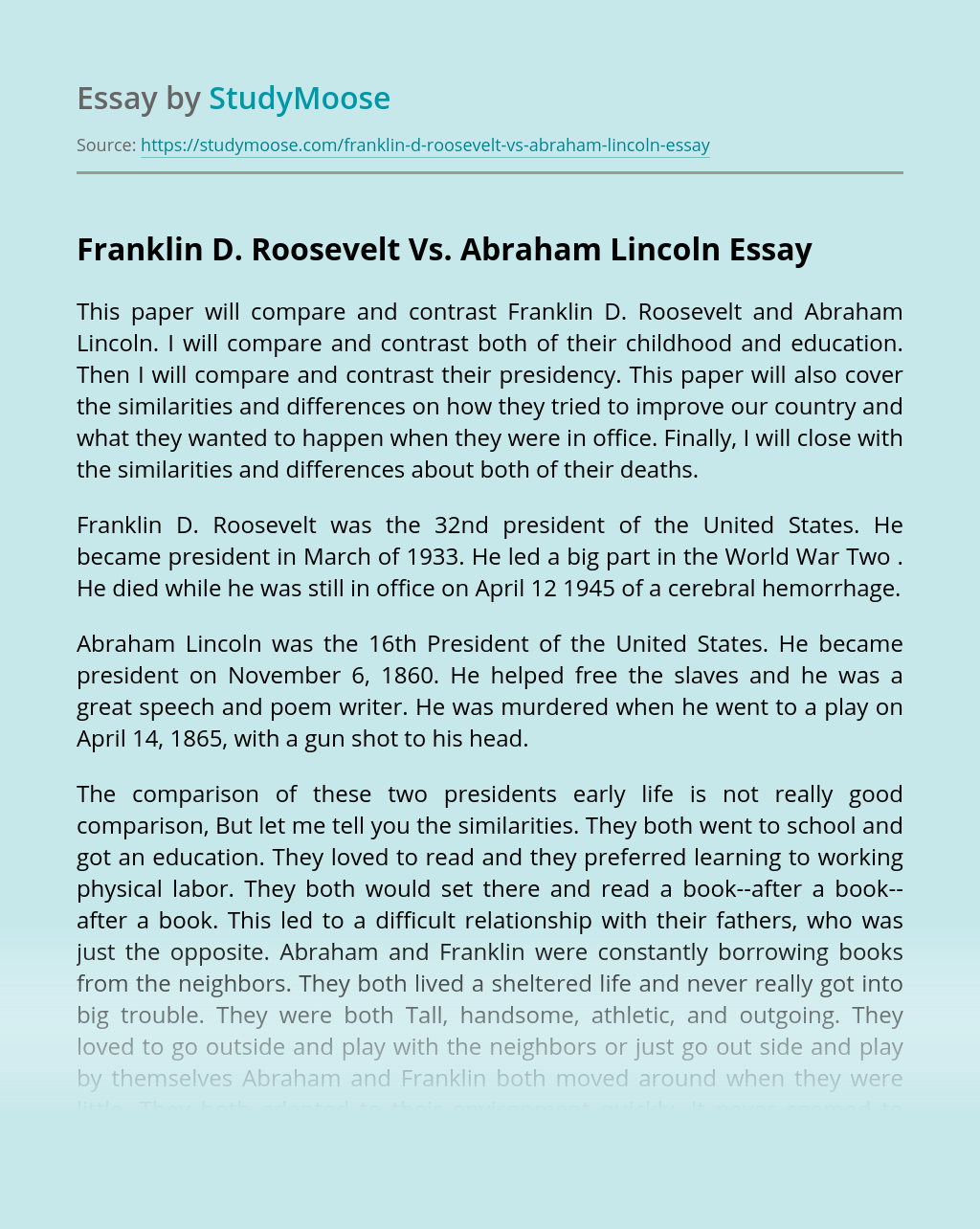 Turn in your highest-quality paper
Get a qualified writer to help you with
“ Franklin D. Roosevelt Vs. Abraham Lincoln ”
Get high-quality paper
Helping students since 2015
Stay Safe, Stay Original