Frankfurt on Personhood and Moral Responsibility

In Harry Frankfurt’s philosophy journal on “Personhood and Moral Responsibility” he formulates many ideas of how people should act. He believes a person is morally responsible for what he has done, only if he could have done otherwise. A person could have done otherwise if the casual determinism is false, and therefore they are not morally responsible. According to Frankfurt, to be a person, one must have a second-order desire. A second-order desire is a desire about a first-order desire, that they yearn to have or not have a certain desire of the first order, and a first-order desire is one that is more than a desire, it is more if one wants to do or not do something.

Don't use plagiarized sources. Get your custom essay on
“ Frankfurt on Personhood and Moral Responsibility ”
Get custom paper
NEW! smart matching with writer

Frankfurt refers to people who have no second-order desires, which he believes are essential to being a person, as “wantons” (11).

Wantons simply let their first-order desires play out, and do not care about their will. They may sometimes reflect on their desires, but they would never form second-order longings.

Wantons are mainly animals, young children, and adults who may not have the opportunity to act in accordance to their desires. Frankfurt maintains that free will is the ability to make ones will conform to second-order desires, and to be morally responsible for one’s actions, one must accept that they had second-order desires about it. By saying this however, Frankfurt is accepting his theory that if one does not have these second-order desires they are not classified as a “person”, and then they cannot be held morally responsible for anything, since they are not a “person”.

Frankfurt believes that having free will does not mean having the freedom to do what one wants. That is freedom of action. If you deprive someone the freedom of their action, that does not mean you are undermining the freedom of their will. Someone who may not be able to act on their desires is in no way hindered in their ability to form desires and make determinations. Freedom of will can be observed in Frankfurt’s example of addicts, in which the unwilling addict’s will is not free, since this is not the will he wants. He is conflicted with his first-order desires, to smoke or not to smoke, but his second-order desire to not smoke is hard to put into effect. Therefore, the unwilling addict lacks freedom of will, since his will is pointing in the direction of smoking, but his second-order desires didn’t want that to be the case. Free will is important since it consists of the satisfaction of second-order desires, and shows us why animals lack free will- they lack second-hand volitions.

There is a distinction between a “will” and a “desire” according to Frankfurt. While a desire is a short term will, it can cause a hierarchy of wills, ranking which wills we choose as more important than a simple desire. The question of whether a person is free to want what he really wants to want arises though. Certain people can enjoy freedom of the will and others cannot. In his last paragraph, Frankfurt states that “it seems by chance that a person is free to have the will he wants” (20). Saying that whether or not we have free will is by chance seems to deny that our actions are willful at all, but when he mentions that we have a “state of affairs” (20) that could also cause us to have free will, he is essentially sustaining his original argument.

Frankfurt on Personhood and Moral Responsibility. (2017, Jan 13). Retrieved from https://studymoose.com/frankfurt-on-personhood-and-moral-responsibility-essay 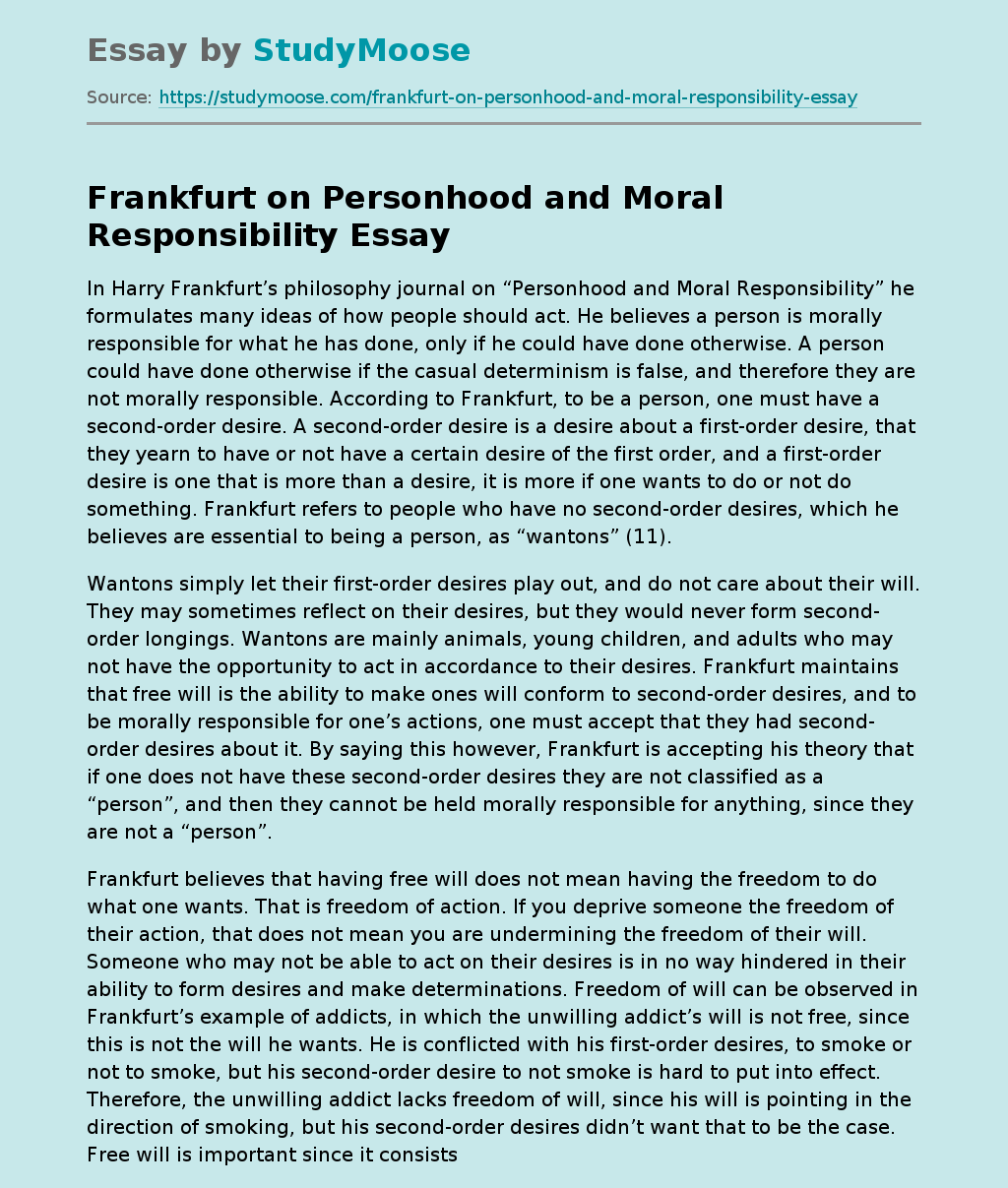