Mary Shelly was born in 1797 and enjoyed a fairly happy childhood. Like her character Victor Frankenstein, she was raised with very little formal education but benefitted from frequent educational outings. As she grew older she also read to further her education and left her home to attend a boarding school. Like Victor’s grand-father Beaufort, Mary’s father faced debt and struggled to keep his daughters cared for, and, like Victor’s mother Caroline, Mary’s mother died of the flu; both Shelly and her character Victor cherished the memories of their mother.

Don't use plagiarized sources. Get your custom essay on
“ Frankenstein by Mary Shelley Creation ”
Get custom paper
NEW! smart matching with writer

At the time when Frankenstein was written, Mary Shelly faced the loss of several children. Their premature births and subsequent deaths caused the young Mary Shelly to become very ill and depressed, a characteristic she passed on to her character Victor Frankenstein; as Mary was seemingly “haunted” by the visions of her lost infants, it is no wonder that she was able to describe, so vividly, the grotesque images encountered in Frankenstein.

One must also take into account that Mary Shelly’s husband was a romantic poet, and she often edited his works.

At the time of Frankenstein’s publish, the roots of Romanticism had been laid. Among the characteristic romantic attitudes were: a deep appreciation of nature, a general preference of emotion over reason and senses over intellect, an introspective evaluation of human personality and its moods and mental processes, a fixation with the “genius”, “hero”, and “exceptional figure”, a focus of passions and inner struggles, and a preference for the exotic, mysterious, monstrous, and diseased; all of which are included in Frankenstein.

It is seen throughout the novel that nature played more of a role than just simply a backdrop setting; nature was a place of spiritual renewal which allowed the characters to escape and release themselves from the conflicts they’ve faced. After the deaths of William and Justine, for example, Victor takes a trip onto the mountains to “clear his head”; the monster finds hope in the changing of seasons, from winter to spring, as he makes his way into the world.

As well, nature serves as a extension of the character’s mood; as Victor makes his way back home after William’s death, he is caught in a thunder storm- the storm expressing his inner turmoil. Romantics also believed that man is naturally good, and that society is at fault for the corruption of man. This “noble savage” is portrayed by the monster in this work. Living in nature, he was simple and good natured; encountering “civilized” men, the monster is attacked and beaten.

Once the monster learns how to read and speak, he learns emotions such as anger and revulsion, and eventually causes death and destruction. These romantic ideals support the texts’ prevailing themes. By the dawn of the Industrial revolution, the quest for knowledge and scientific enlightenment had reached its peak. Through the conflicts faced by Victor, Mary Shelly sought to warn Europe against a ruthless pursuit of knowledge by providing an example of the consumption of a man through obsession and the monstrosities that are potentially released.

After hearing Victor’s tale, Walton heeds the warning and decides to turn back; his excursion into the Arctic was fueled by his obsession to chart the unknown land, just as Victor’s creation of the monster was fueled by his obsession of finding the secret to life. Hearing how Victor’s family and loved ones were destroyed because of the monster he created proved a point that obtaining knowledge is not worth losing everything else.

In a time of revolution, Frankenstein was seen as an allusion of what’s to come. In fact, the creation of the story began with a conversation about the experiments of the 18th-century natural philosopher and poet Erasmus Darwin, who was said to have animated dead matter. Mixed with romantic ideologies and events that shaped the life of Mary Shelly, the gothic science fiction novel Frankenstein portrayed the life of an ambitious, yet amateur, scientist of the eighteenth century very accurately.

The inner conflicts and prevailing themes proved realistic and necessary to not only the audience in the 1700s, but even of today. With the exploration and manipulation of biological science, it is important that we view the future implications of our research, lest we create a monster that could consume our society and destroy our lives as Frankenstein’s monster did. 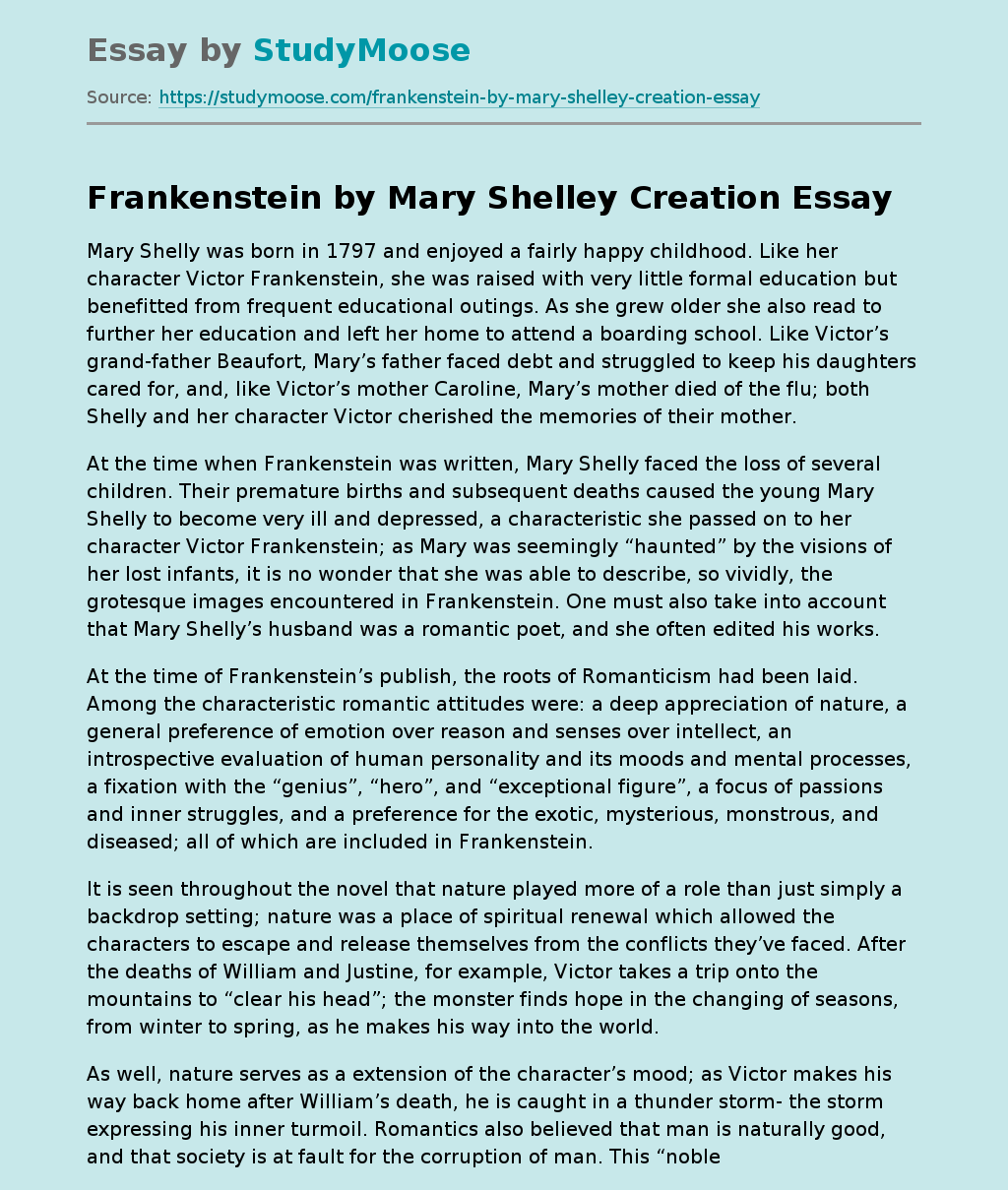