SUCI HANIFAH
LITERARY CRITICISM II
EDRIA SANDIKA/MARLIZA YENI
8 MAY 2013
Frankenstein as Anti Hero Character
A women who wrote “Frankenstein” named, Mary Shelley, she was born August 30, 1797, in London, England. Mary Shelley came from a rich literary heritage. She was the daughter of William Godwin, a political theorist, novelist, and publisher. Her ideas to write Frankenstein cameon summer of 1816, Mary and his brother Percy visited the poet Lord Byron at his villa beside Lake Geneva in Switzerland. Stormy weather finally forced them going indoors, while the other guests read a volume of ghost stories.

Turn in your highest-quality paper
Get a qualified writer to help you with
“ Frankenstein as Anti-Hero Character ”
Get high-quality paper
NEW! AI matching with writer

So there, Mary’s story became Frankenstein when she was only 19 years old.Frankenstein was published in 1818, when Mary was 21, and became a huge success. Many people disbelieving that a 19-year-old woman could have written such a horror story.

The story starts with the letter of a sailor who had trip to North Pole, in the letter to his sister he was talking about a new friend, who was strange, calm, but had complicated and mysterious life story behind.

The man’s name was Victor Frankenstein, Victor told him all of his life story, about his happy childhood, his family, Elizabeth, his best friend Hendry Clerval who taught him about danger and adventure. Victor was a bright student, he loves science, he intends to now about everything, nature,universe , and also the living creature. And his curiousity about human, drove him into his big achievement in his entire of life, his passion, desire, and mind, led him to create a human or worse, we can say it a horrible moster.

The figure of Victor Frankenstein is very interesting to be analyzed. Mary created him with amazing personality, which can be categorized as Hero’s trait but through his achievement and fatal flaw, that personality is destroyed by himself, in case here described as “anti-hero”. Focus of analysis is Victor’s characterization in this story, because he passed so many events with up and downs untill finally he found the way to make his dream come true, to research about human and made a human-like. So, the next chapter will discuss especially “anti hero”, and will show the evidences and the codes that put Victor as a Anti-hero.

A hero in literary work is a character which has a special power, admirable traits, and good achievement (Begley 1). The power that a hero has must be used for the justice, the human, for the country and the world, a hero must have a special power, physically or spiritually. The action from a hero will impress the people around, being admirer because of their admirable traits, kind hearted, full of spirit, brave and honest. An absolute example of a hero is : Captain America, who fight for his country and human, or Doraemon who has a special ability to use a sophisticated tools to help Nobita, and nobody have it, that special pocket. On the contrary, Anti-hero is similar with the hero, but he has a fatal flaw that lead him and his society into misery. Anti heroes usually distrust common values and are unable to commit themselves to any ideals. In his writing, Begley adds that anti hero will has some of the personality flaws and ultimate fortune traditionally assigned to villains but beside that also has enough heroic qualities or intention to gain the sympathy of readers, anti hero can be awkward, passive, or pitiful.

Victor in general, seemingly has Hero’s traits. Victor came from a noble family, rich, and high respect in his society, his father had filled several public situations and positions with honour and reputation. He was a civilized person, his parent loved him so much, he was bringing up with a big fullfilment, tenderness and deep conciousness of his parent toward him. He received a lesson of patience, charity, and self-control, he really has a beautifull childhood, as he told to the sailor : “No human being could have passed a happier childhood than myself” (Shelly 29). That was several proves that Victor being rise and growth willingly.

In Frankenstein, Victor was a round character, round character is a complex character and increases in complexity throughout the story, and the opposite of flat character (Gerald. Dictionary of Narratology). Because if we identify the character of Victor start from his happy childhood, university environment, but since he created the human-like, the complexity of his life getting worse and worse. He tried to struggle and beated down the monster to reconcile his mistake, and went back to his hometown to safe his family but ironically he couldn’t.

The position of Victor as the anti hero is set in the blurring line between hero and villain (Begley 2), but through the actions and the way he thinks the reader can judge or give their opinion about this tragic character. Looking for the clue and action of the character, based on the proairetic code by Roland Barthes, which is applies to any action that implies a further narrative action of Victor in general, we may look the two bigest act of him : The first when he ran away after staring at the monster. Run here means that he tried to free up his regret feeling, hide his fearness. And the second ; when Victor decide to chase the monster, chasing here absolutely as the revenge, and retaliation for his sinful feeling.

The first time when Victor find his misery was when his mother died, all this time his mother such an angel to him, but when she died, he seemed like to lose his life, and Elizabeth is the only woman that he loved. When he study in University, he met with Professor M. Krempe and M. Waldman who provided and inspired him to start his research, without permission from the preofessor, Victor secretly started to create a human, in his apartment which had changed into private laboratory. One by one the various keys were touched, and victimize his bright brain, and soul, Victor successfully made up his achievement. Till this part we can say he had reach his purpose, but in fact after he stared at his own creature, what was become his dream, was exactly right destroy in a few seconds. As it shown in Victor’s mind when he finished his creature :“I felt the bitterness of disappointment, dreams that had been my food and pleasant rest for so long a space were now become a hell to me, and the change was so rapid, the overthrow so complete!” (Shelley 50). Thisis prove that he was so scare to the thing that he had created, it is not satisfy his sacrifice that he had done for a very long time, but just end up with a horrible creature in front of him.

The pitiful life of Victor could be also the evidence that bring him to anti hero, as the characteristic of anti hero, Victor has some of it. He typically distrust conventional values, he thinks and acts in the outside line of normal people, he likes the different things, just like how much he loves his gods fantacy : Cornelious Agrippa, Albertus Magnus, Paracelsus. When I read Frankenstein, it makes a serious catharsis, the emotion of the reader, and how the sympathy feeling suddenly appear when Victor met his fatal flaw. The last clue is the death of Victor’s family, started with his youngest brother who had been killed by the monster, then his best friend Hendry, his lovely wife Elizabeth, and the last was his father. Beside that, the result of his horrible creature’s revenge also cause an innocent woman had been punished. This is the biggest fatal flaw that he made, the creature that he created, gave soul, had destroyed and drown himself, his admirable trait was useless, his mind, knowledge, power, instead led him to a tragic end of his life and cause the mental conflict. The condition af Victor after he had drown was so pathetic, as Walton explained to his sister in the letter : “His limbs was nearly frozen, and his body dreadfully emaciated by fatigue and suffering. I never saw a man in so wretched a condition” (Frankenstein, P. 16)

As far as I concern about Victor Frankenstein position in the story, that is true that he was reaching his achivement which become his purpose of studying and researching, but through his human creation, the monster had caused him in the middle line of hero or anti hero. In case here, based on the evidences that I already explain above, Victor was not a Villain. Because Villain regarded as antagonist and never change his mind or his goal, but Victor directly changed his mind and felt scare at the very first time he saw his living creature’s eyes. Moreover, when he depressed by the death of the people that he loves, had been murdered by the monster, he changed his mind, refused to make another monster and decided to fight back. This is what anti hero did, after the fatal flaw, depressed, big loses in his life, then ends up ironically with the sadness and sorrow.

References
Wilfred, Guerrin. A Handbook of Critical Approaches to Literature. New York. Oxford University Press. 1999 Begley, Louis. Defenition of Anti- Hero. 2000
Prince, Gerald. Dictionary of Narratology. Accessed on 7 May 2013 Module on Barthes : On the Five Code. Accessed on 7 May 2013 The Adaptation from the
National Library of Medicine.”Frankenstein: Penetrating the Secrets of Nature” Retrieved from websites : www.duluth.lib.mn.us 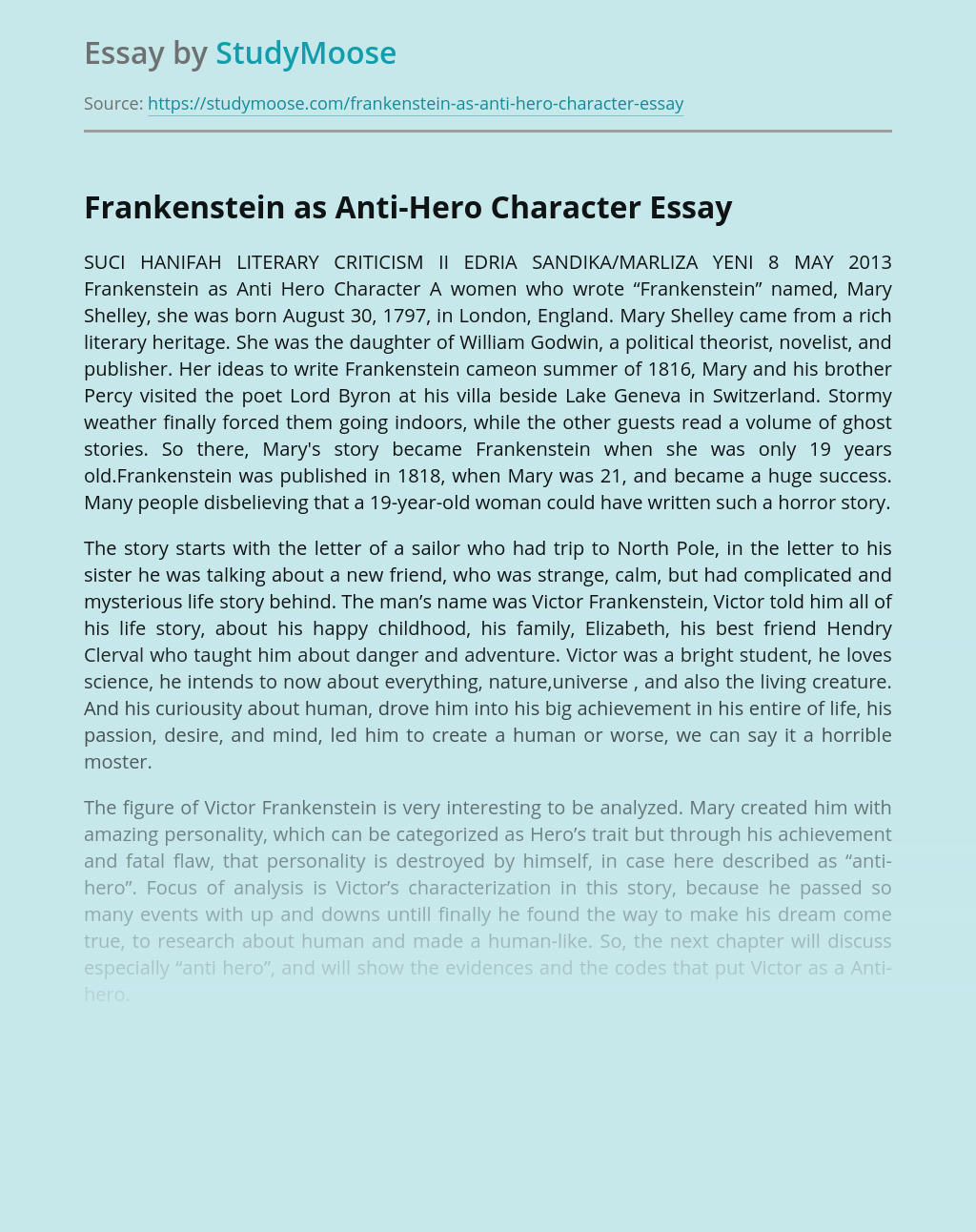 Turn in your highest-quality paper
Get a qualified writer to help you with
“ Frankenstein as Anti-Hero Character ”
Get high-quality paper
Helping students since 2015
Stay Safe, Stay Original