Frankenstein a novel worth study because of Shelley's attention

Frankenstein, a novel worth study because of Shelley’s attention to thorough details. More importantly it is worthy of study because of the extensive examples of romanticism and many other englsish tenets. Romanticism, spurred by the French Revolution to promote justice and equality. Humans are easily the most judgmental creatures on the planet; always basing people off their appearance and justifying the way someone feels about another because of a social aspect.

Romanticism is a philosophy used to create a more spontaneous atmosphere, in literature, during the 18th century.

Don't use plagiarized sources. Get your custom essay on
“ Frankenstein a novel worth study because of Shelley’s attention ”
Get custom paper
NEW! smart matching with writer

(Merriam Webster) The romantic period of literature, in which this book is written, proves to the audience that the natural world is exemplified through the senses of the mountain river that parallels with the chaos in Victor’s life. Along with the loss of happiness. During the enlightenment, romanticism was brought about by english poets but later used by many more. (Literary Devices) Shelley puts an emphasis on emotions of the characters by placing romanticism throughout the entirety of the novel.

Shelley focuses on romanticism by bringing into focus her emotions that parallel with the characters. She opposes the forces of nature and science and their influence on society and the way people live their daily lives. . The industrial revolution impacted all forms of the community within the novel. When the creature became fully aware of how victor deserted him he realizes how his appearance scares the normal folk. Emotion in romanticism; specifically from waltons point of view. His crew member traveled through some rough waters that reflected upon his loneliness.

All the interactions the creature endures throughout the novel sets him up for success throughout the closing of the book. The use of romanticism has a great significance especially in the beginning when shelley is beginning to examine her place and prove to the audience what she believes. Shelleys emotions in her own life are shown through many examples in the novel. The chaos of romanticism is fascinating to the reader in many aspects. It keeps the book lively and interesting to read.

Many times shelley uses contrasting differences between the creature and Victor. “The labours I endured were no longer to be alleviated by the bright sun or the gentle breezes of spring.” (Shelley 126) this is showing the pain that the creature went through. As an audience we gradually realize that to Victor nature is no longer as important to his life but he still believes the country of Switzerland is beautiful. “Dear Mountains! My own beautiful lake!” (Shelley 20). The chaos of human works and nature are contrasted as well. “I feel exquisite pleasure in dwelling on the recollections of childhood, before misfortune had extensive usefulness into gloomy and narrow reflections upon self.” (shelley 38). Showing that instead of looking back at a ‘gloomy’ life you can narrow the reflections upon yourself and grow. As humans we don’t always appreciate the natural beauty around us but if you don’t see the beauty you become captivated by the negativity that follows the positivity. The way you interact with the natural world can affect your life and the way you live it. sec 2

Thesis: humans are judgemental but people will inherently be good or evil based on who is around them.

Shelley uses the theory of state of nature to prove human nature and provide more specific examples of how society belittles women. Now, there is no where in the world where gender inequality doesn’t exist from the U.S. all the way to China; there are many examples of gender injustices within our society today. Accoring to some critics, sex is determined by biologican and anatomical categories of male or female (Gender 2094) Shelley drives this male driven plot and shows women are subordinate to men. Shelley creates this monster who has no positive parental figures in life. Because of all the negative and traumatic events that occurred in the creatures life the audience might be the first to assume that the creature is inherently evil or will turn evil. There is also a cultural criticism which is the study of cultural behavior and expressions to relationships (Cultural Criticism 2093) One of the driving meanings of this novel forces the reader to think about how the creature impacts the society not only physically and mentally but also culturally. With humans being so judgemental it is very easy to assume something about another person’s character or self. “Her hair was the brightest living gold, and despite the poverty of her clothing, seemed to set a crown of distinction on her head. Her brow was clear and ample, her blue eyes cloudless, and her lips and the moulding of elizabeth is portrayed as an angel with her halo-like golden hair and cloudless eyes. Her heavenly looks are what people see first and is the reason Caroline adopted Elizabeht. Additionally, her angelic beauty. Her face so expressive a being heaven sent, and being a celestial stamp in all her features” (Shelley 17) exemplifying that not every person is as they physically seem.

The death of Victor’s mother created a series of events providing the novel with many examples of why women are irrelevant in this society. There could have been many places in the novel where Shelley could have implemented female parts or characters to drive the plot and not make it as anti women. Although the creature has not been explicitly told what view he has to have upon women; he naturally sees them as equal humans when compared to men. The injustices faced by the creature can parallel with the discriination faced by the women in this novel. Since the creature had no parent or adult figure to follow nature became the only example he could follow. Traveling through many places not a single person ” with berries and nuts and roots which he gathered from neighboring woods (shelley 99) within the woods the creature could be himself; also the woods provided the creature with all his meals and everything he needed to survive. When shelley would describe the woods she would use calm and peaceful descriptions making the audience feel the woods was a safe place not only for themselves but also for the creature. “No eve soothed his sorrows, or shared his thoughts he was alone.” (Shelley 145) Highlight the creatures solitude from the beginning but circling back to nature, “eve” being the only thing the creature could rely on.

The men in the novel carry traits a ‘typical’ male would attain: single-minded, possessive, and obsessive. Victor embodies this male character with the single-mindedness but with a scholarly composed nature as well. “I will work at your destruction, nor finish until I desolate your heart.” (Shelley 156) signifying this great ambition by the creature to try to live up to the standards of his master; only to be told he is a “slave of impulses” (Shelley 218). Victor is showing his true ‘typical male’ attributes in that exact part in the novel. Although the men in Frankenstein parallel with these characteristics of a single-minded, self-absorbed, obsessive, and possessive male the female counteracts this negative theory. Victor’s wife, Elizabeth, truly embodies the ‘perfect women’ image that every mother, wife, and women aspires to be. “Docile and good tempered. Gentle and affectionate” (Shelley 66) is exactly how one would describe Elizabeth. Affection is monotonous within the roles of the women of the novel. They are utterly self-sacrificing women who put the needs of others and their family before their own. These are the exact women this novel needed more of in addition to positive male characters as well.

Frankenstein a novel worth study because of Shelley's attention. (2019, Dec 19). Retrieved from http://studymoose.com/frankenstein-a-novel-worth-study-because-of-shelley-s-attention-example-essay 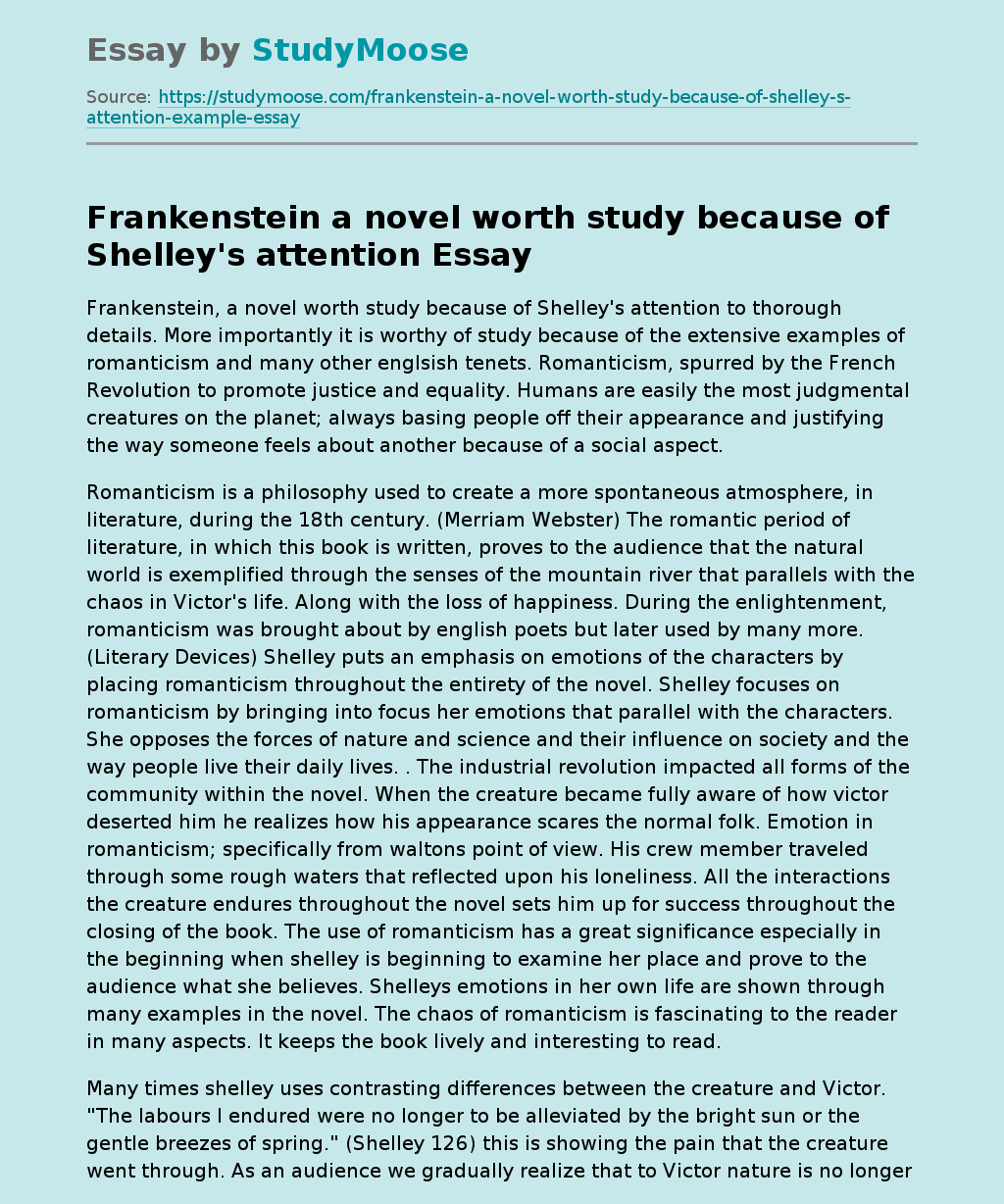