Francisco “Franz” Arcellana (September 6, 1916 – August 1, 2002) was a Filipino writer, poet, essayist, critic, journalistand teacher. He was born on September 20, 1916. Arcellana already had ambitions of becoming a writer during his years in the elementary. His actual writing, however, started when he became a member of The Torres Torch Organization during his high school years. Arcellana continued writing in various school papers at the University of the Philippines Diliman. He later on received a Rockfeller Grant and became a fellow in creative writing the University of Iowa and Breadloaf’s writers conference from 1956- 1957.

Don't use plagiarized sources.
Get Your Custom Essay on ﻿Francisco Arcellana Just from $13,9/Page

He is considered an important progenitor of the modern Filipino short story in English. Arcellana pioneered the development of the short story as a lyrical prose-poetic form within Filipino literature. His works are now often taught in tertiary-level-syllabi in the Philippines. Many of his works were translated into Tagalog, Malaysian, Russian, Italian, and German. Arcellana won 2nd place in 1951 Don Carlos Palanca Memorial Awards for Literature, with his short story, “The Flowers of May.

14 of his short stories were also included in Jose Garcia Villa’s Honor Roll from 1928 to 1939. His major achievements included the first award in art criticism from the Art Association of the Philippines in 1954, the Patnubay ng Sining at Kalinangan award from the city government of Manila in 1981, and the Gawad Pambansang Alagad ni Balagtas for English fiction from the Unyon ng mga Manunulat sa Pilipino (UMPIL) in 1988. On April 2, 1989, the University of the Philippines conferred upon Arcellana a doctorate in humane letters, honoris causa. Francisco Arcellana was proclaimed National Artist of the Philippines in Literature on 23, 1990 by then Philippine President Corazon C. Aquino. In 2009, or seven years after his death, his family came out with a book to pay tribute to National Artist for Literature Arcellana. The book entitled, “Franz,” is a collection of essays gathered by the Arcellana family from colleagues, friends, students and family members, including fellow National Artist Nick Joaquin, Butch Dalisay, Recah Trinidad, Jing Hidalgo,Gemino Abad, Romina Gonzalez, Edwin Cordevilla, Divina Aromin, Doreen Yu, Danton Remoto, Jose Esteban Arcellana and others.

Selected Stories (1962)
Poetry and Politics: The State of Original Writing in English in the Philippines Today (1977) The Francisco Arcellana Sampler (1990).

He is the fourth of 18 children of Jose Arcellana y Cabaneiro and Epifanio Quino. He was married to Emerenciana Yuvienco with whom he has six children, one of whom, Juaniyo is an essayist, poet and fictionist. He received his first schooling in Tondo. The idea of writing occurred to him at the Tondo Intermediate School but it was at the Manila West High School (later Torres High School) that he took up writing actively as staff member of The Torres Torch, the school organ.

In 1932 Arcellana entered the University of the Philippines (UP) as a pre-medicine student and graduated in 1939 with a bachelor of philosophy in degree. In his junior year, mainly because of the publication of his “trilogy of the turtles” in the Literary Apprentice, Arcellana was invited to join the UP Writers Club by Manuel Arguilla – who at that time was already a campus literary figure. In 1934, he edited and published Expression, a quarterly of experimental writing. It caught the attention of Jose Garcia Villa who started a correspondence with Arcellana. It also spawned the Veronicans, a group of 13 pre-WWII who rebelled against traditional forms and themes in Philippine literature.

Arcellana went on to medical school after receiving his bachelor’s degree while holding jobs in Herald Midweek Magazine, where his weekly column “Art and Life” (later retitled “Life and Letters”) appeared, and in Philcross, the publication of the Philippine Red Cross. The war stopped his schooling. After the war, he continued working in media and publishing and began a career in the academe. He was manager of the International News Service and the editor of This Week. He joined the UP Department of English and Comparative Literature and served as adviser of the Philippine Collegian and director of the UP Creative Writing Center, 1979- 1982. Under a Rockefeller Foundation grant he became a fellow in creative writing, 1956- 1957, at the University of Iowa and Breadloaf Writers’ Conference.

In 1932 Arcellana published his first story. “The Man Who Could Be Poe” in Graphic while still a student at Torres High School. The following year two of his short stories, “Death is a Factory” and “Lina,” were included in Jose Garcia Villa’s honor roll. During the 1930’s, which he calls his most productive period, he wrote his most significant stories including, “Now Sleeps the Crimson Petal” cited in 1938 by Villa as the year’s best. He also began writing poetry at this time, many of them appearing in Philippine Collegian, Graphic and Herald Midweek Magazine.

He is considered an important progenitor of the modern Filipino short story in English. Arcellana pioneered the development of the short story as a lyrical prose-poetic form within Filipino literature. His works are now often taught in tertiary-level-syllabi in the Philippines.

Some of his works have been translated into Tagalog, Malaysian, Italian, German and Russian, and many have been anthologized. Two major collections of his works are: Selected Stories, 1962, and The Francisco Arcellana Sampler, 1990. He also edited the Philippine PEN Anthology of Short Stories, 1962, and Fifteen Stories: Story Masters 5, 1973. Arcellana credits Erskine Caldwell and Whit Burnett as influences. From 1928 to 1939, 14 of his short stories were included in Jose Garcia Villa’s honor roll. His short story “The Flowers of May” won second prize in 1951 Don Carlos Palanca Memorial Award for Literature. Another short story, “Wing of Madness,” placed second in the Philippines Free Press literary contest in 1953, He also received the first award in art criticism from the Art Association of the Philippines in 1954, the Patnubay ng Sining at Kalinangan award from the city government of Manila in 1981, and the Gawad Pambansang Alagad ni Balagtas for English fiction from the Unyon ng mga Manunulat sa Pilipino (UMPIL) in 1988. He was conferred a doctorate in humane letters, honoris causa, by the UP in 1989. He was proclaimed National Artist in Literature in 1990 – L.R. Lacuesta and R.C. Lucero

Selected Stories (1962)
Poetry and Politics: The State of Original Writing in English in the Philippines Today (1977) The Francisco Arcellana Sampler (1990). This page is based on the copyrighted Wikipedia Francisco Arcellana; it is used under the Creative Commons Attribution-ShareAlike 3.0 Unported License. You may redistribute it, verbatim or modified, providing that you comply with the terms of the CC-BY-SA. Francisco Arcellana

Mga Aklat
Selected Stories (1962)
Poetry and Politics: The State of Original Writing in English in the Philippines Today (1977) The Francisco Arcellana Sampler (1990)

Maikling Kuwento
Frankie
The Man Who Would Be Poe
Death in a Factory
Lina
Divided by Two
Tula
The Other Woman
This Being the Third Poem This Poem is for Mathilda
To Touch You
I Touched Her
Sanggunian
“Francisco Arcellana.” ncca (hinango noong 26 Oktubre 2007).

THE MATS
Uploaded on Oct 25, 2011
*The Mats is about the story of the Angeles family. Where in Mr. Angeles
brought home gifts (the mats) for his children from a long work-vacation. The conflicts starts when Nana Emilia (her wife) notices that he even provide gifts for their already dead children. *the story shows the strong family ties of the Filipinos (the MATS on how it is weaved)

This movie is a partial requirement of our LIT-101 (Phil.Lit) under Mam Kathleen Javillionar.
from Group-THE MATS of BSA1g (2011-2012)

﻿Francisco Arcellana. (2016, May 13). Retrieved from https://studymoose.com/francisco-arcellana-essay 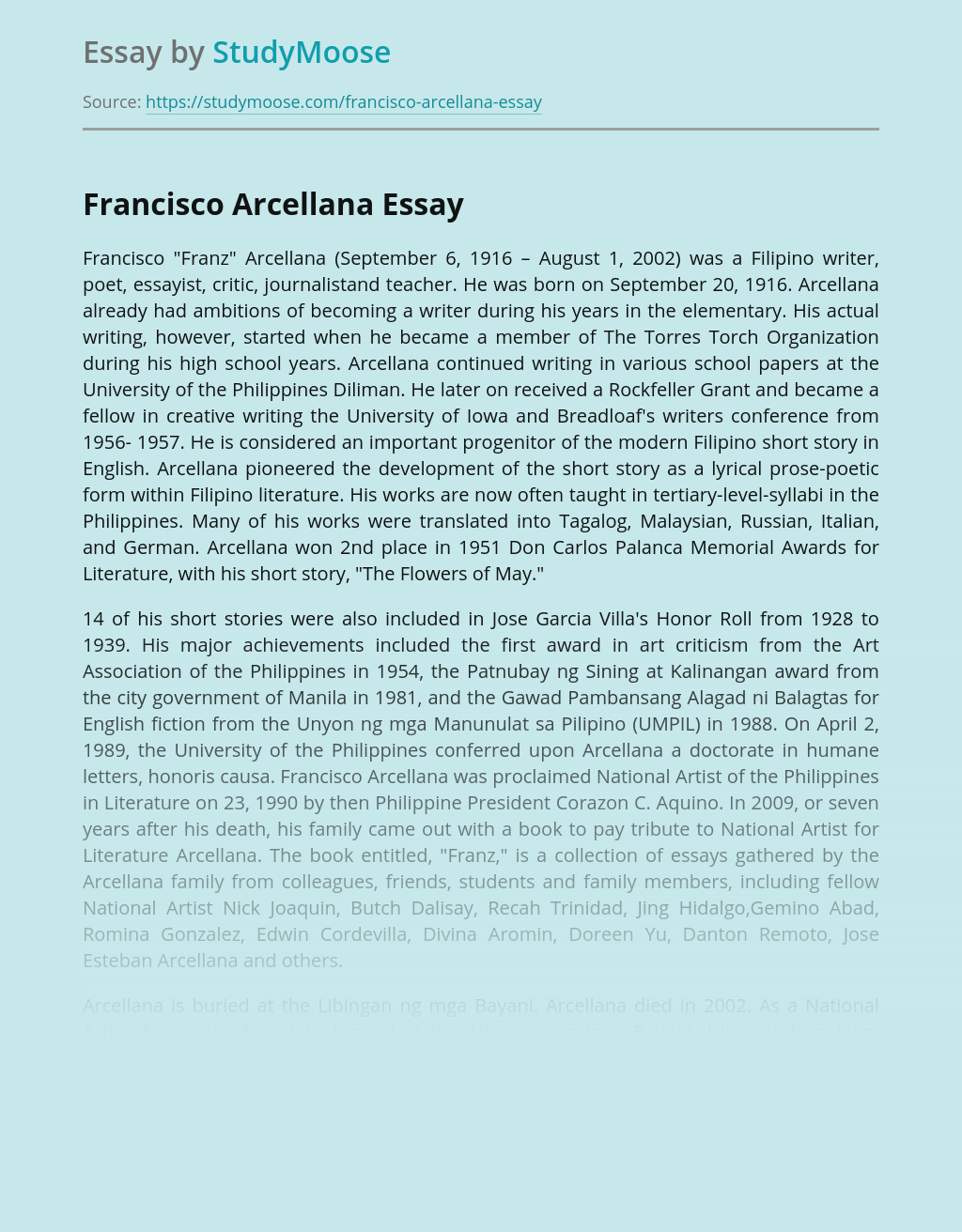 Trust and family relationships are the two main themes in the short story “Crossing” by Mark Slouka. The story tells us about a father, who is going through a tough period, and his relationship to his son. He wants to obtain trust from his son trough a trip in the nature but runs into some... VIEW ESSAY

The use of an unnamed first-person narrator in Edgar Allan Poe’s “The Tell-Tale Heart” contributes to many purposes. Throughout this story, one may notice that the narrator is a little off, and seems to have a type of disorder. Right off the bat the narrator admits he is “dreadfully nervous” and has a disease. One... VIEW ESSAY

View sample
Get Essay
Helen of Troy Fact vs. Fiction

Together, in the spur of the moment, they ran. The walls they enclosed themselves in, along with all of Troy, protected them as the ships launched and war erupted. Helen of Troy’s story of love and deceit inspired authors, such as Homer and Tisias, to write about the war caused by one woman and her... VIEW ESSAY

The narrator of Mister Pip is Matilda, a young girl growing up on an island in the south Pacific. As the story unfolds it becomes gradually more apparent that this island is in the grip of a brutal war. Matilda is deflected from the impact of the threatening violence by her fascination with Mr. Watts... VIEW ESSAY

“No Angel” is a brief composed by Bernie McGill in 2010 in the anthology “The Finest British Brief Stories 2011”. In “No Angel” we follow Annie, our main character, through her experiences with seeing her dead family members, mainly her dead dad. The story occurs in a contemporary Northern Ireland, where the battles in between... VIEW ESSAY