Slavery in "Adventures of Huckleberry Finn" by Mark Twain

Mark Twain had direct experience with the slavery that he described in Adventures of Huckleberry Finn. When Mark Twain in 1884 / 1885 wrote his Adventures of Huckleberry Finn, describing a series of Mississippi river-town adventures experienced by a white boy, he created his novel in slavery time Missouri. During his writing, many influences prompted the author to examine the contemporary conditions of the black (Champion 54). From the novel the reader gathers a deep understanding of the meaning of living in a slave society in the period when slave trade was brisk.

Don't use plagiarized sources. Get your custom essay on
“ Slavery in “Adventures of Huckleberry Finn” by Mark Twain ”
Get custom paper
NEW! smart matching with writer

The person who reads Adventures of Huckleberry Finn does not come upon the discussion of slavery until Chapter Two, when Mark Twain describes how Huck and Tom spend their lives in a slaveholding society. The opening chapters contain what can be described as Tom Sawyer’s total experiences that make up his life. In these chapters the reader is led to see these circumstances and society as Tom Sawyer does. As a result, the slave Jim is illustrated mainly as a character to laugh at and play jokes and tricks on, and slavery is introduced as a normal and logical phenomenon.

From this perspective, Jim is naive and disposed to believe in superstition – a humorous story character rather than a human being with ability to feel deeply and have thoughts and ideas.

As Huck and Jim go beyond the social world of Tom Sawyer and have a good time alone together on the bank of the river, Jim begins to cast off the comic characteristics.

It is as if Mark Twain begins portraying Jim through Huck’s observation rather than Tom’s observation. As Huck increasingly considers Jim as a more and more complex person with ideas and the conscious mind, Jim is described to the reader as less of a person who is comic. Jim’s deep human world is described in particular in his harrowing sense of deep regret over striking his deaf daughter, his statement that Huck is his only true friend, his feeling of happiness at discovering Huck alive after the loss in the fog, and the preaching he gives Huck for playing the last joke on him. When Tom Sawyer once more appears in the scene in the Phelps situations, however, Jim again is pictured as if reflection of the powerful consciousness of Tom Sawyer; in the end Jim is again a character to laugh at, an object used for humorous purposes.

The circumstances that lead up to describe Jim in slavery continue to be set in Chapter Four, as Huck, being an outsider in this system of human organizations almost like Jim, goes to Jim for advice about his future when he has suspicion that Pap may have come back. In contrast to the views having a high state of culture and social development that Tom Sawyer gets from books, Huck and Jim are alike in depending on folk knowledge, irrational beliefs that are given little credibility in this cultured civilization.

The decisive scene that sets the stage for an escape from slavery is Pap’s long angry speech against the political authority and black folk in Chapter Six. Pap, in all his lack of knowledge and meanness, rails against free black human beings who are courageous enough to try to dress in a white shirt, can communicate in several languages, and are teachers in a college. This statement, uttered by a man who is extremely unpleasant, sadistic, overwhelmed by strong negative emotion, proud of his ignorance, and decided that his son will remain unable to read and write, is the reader’s first hint that Mark Twain’s sympathies are not with the slaveholding civilized classes.

The signs that the reader’s sympathy is directed to Jim rather than to the society that enslaved him come into view early in the novel in the common characteristics between Jim and Huck. The reader observes here a parallel thematic progress in the destiny of the white boy and the black man, both of whom are casting off shackles that restrict their freedom. As Jim, the black man presented as possession by a human society, breaks free from confinements of slavery, so Huck, the white boy who has always been a vagabond, breaks free from confinements of his own enslavement in the roughly built hut. Moreover, both Huck and Jim are escaping from the same woman, Miss Watson. And both make their escape simultaneously. The emotional attachment between the runaway boy and the runaway slave is born instantly as they join their forces for common freedom.

The scene when they meet with each other on Jackson’s Island gives rise to uneasiness that comes again and again to the mind of Huck throughout the story, one he never resolves in his thoughts: tension between the values of civilization instilled by forceful and insistent repetition – the law, the legalized moral standards of the slaveholding social organizations (the fairness of which he never puts to question) – and his natural intuition to communicate with Jim kindly as with a close friend. The voice that says him to do what societal norms require, more exactly, to turn Jim in, is the voice he calls his sense of right that governs his thoughts and actions. To the end of the novel, he sees his desire to defend Jim from trouble as his own state of being weak – the attitude that makes him make decision, at last, that he can never be well-mannered and civilized.

This inner conflict is seed when Jim and Huck first meet with each other on Jackson’s Island. When Jim, in all likelihood for his own safety, somewhat in hesitation explains that he has escaped from the control of Miss Watson, Huck really experiences surprise that Jim has broken the rules of society. But Huck, who has already earlier broken the law himself, has assured Jim that he would not tell anyone, even, he said, if “people would call me a low down Abolitionist” (50). Every family with which Huck is familiar seems to possess slaves. Not only Miss Watson had slaves, but the Grangerfords, the Wilkses, and the Phelpses too.

Well, you see, it ‘uz dis way. Ole missus – dat’s Miss Watson – she pecks on me all de time, en treats me pooty rough, but she awluz said she wouldn’ sell me down to Orleans. But I noticed dey wuz a nigger trader roun’ de place considable lately, en I begin to git oneasy. Well, one night I creeps to de do’ pooty late, en de do’ warn’t quite shet, en I hear old missus tell de widder she gwyne to sell me down to Orleans, but she didn’ want to, but she could git eight hund’d dollars for me, en it ‘uz sich a big stack o’ money she couldn’ resis’. De widder she try to git her to say she wouldn’t do it, but I never waited to hear de res’. I lit out mighty quick, I tell you (50).

Jim’s statement that explains why he ran away, as well as Huck’s discussion about the abolitionists puts the novel in the historical developments of its time. At that time people had the view of the slave as property; accidentally separated members of slave families; slave traders did not consider slaves as human beings. The slave owners often had uncertain financial situation, which often led them to treat their “property” brutally. Slave feared to be sold further south – to New Orleans – to become a property of a new master and work on a large plantation. Abolitionists who made efforts to end slavery were disliked intensely by citizens in general. Slaves had the unceasing hope that he or she would some day be able to run away and make money sufficient to redeem the members of his or her family. All these historical elements became the driving themes of the novel.

Being familiar with the episodes of life in slavery, Mark Twain shows that Jim’s desire to run away has three factors: he is separated from his family; he becomes aware of Miss Watson’s intentions to sell him down south; and he is full of resolution to buy the separated members of his family and make them free. In the case if masters of his family members refuse to sell them , then , Jim claims , he will ask for the help of abolitionists

The clash between morality, legality and region, especially as it about slavery and property, is seen throughout all of Adventures of Huckleberry Finn. The idea that one person can really own another, human body and spirit, is given strength to not only by the legal rules governing society and the state, but by the practices and doctrines of the church as well. Slavery became a firm way of life and had a substantive effect on the fundamental values, manners, and a way of living of the nation.

Slavery in "Adventures of Huckleberry Finn" by Mark Twain. (2016, Aug 04). Retrieved from https://studymoose.com/four-functions-of-management-3-essay 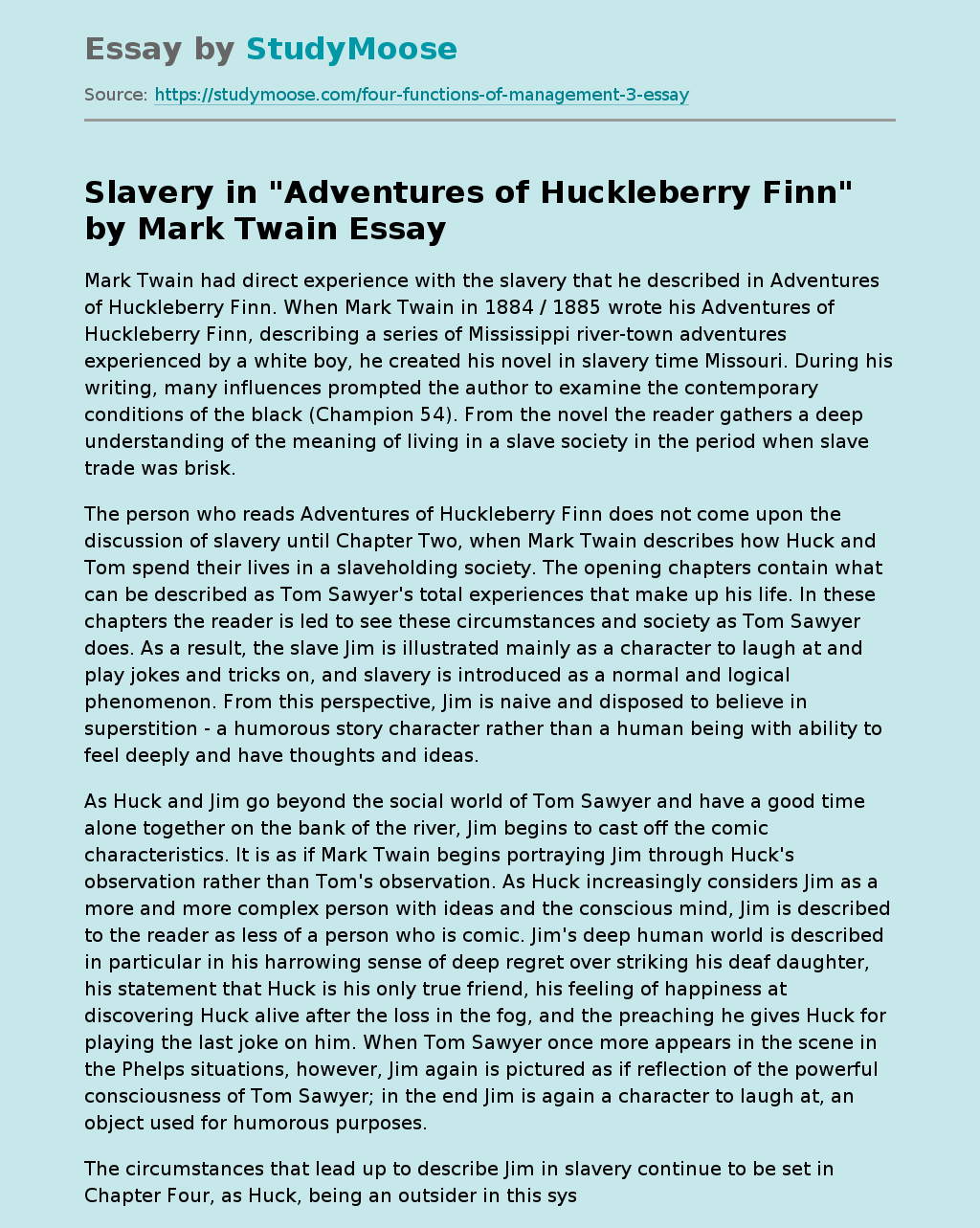