Fortnite by Epic Games or Apex Legends by Respawn Entertainment

Respawn Entertainment is a AAA video game development studio that made Apex Legends, Titanfall, and Titanfall 2, which are their most popular games. They have also helped develop Call of Duty games and they also created Battlefield games. Respawn Entertainment was founded in 2010 by Jason West and Vince Zampello. Epic Games is the creator of Fortnite, the second, and used to be the most popular video game worldwide. Fortnite was created in 2011and went through a 6-Year remake to create Fortnite Battle Royale and Fortnite Save the World.

Don't use plagiarized sources. Get your custom essay on
“ Fortnite by Epic Games or Apex Legends by Respawn Entertainment ”
Get custom paper
NEW! smart matching with writer

Epic Games’ goal is to bring new experiences to every platform, like PC, Xbox, PS4, etc., and they steal games and ideas. A game they stole was Borderlands 3 and others, and the respawn idea from Apex Legends.

They depend on your talents or specialties, like drawing or coding.

Another reason why I rather work or play games from Respawn is because of the customer service. When you can log into an account or there’s a bug to it, they are really bad at helping with whatever problem you have with your account. For instance, you can’t visit unless you work there, and if you call, they just put you on hold for a really long time.

Another reason why I’d rather play or work at Respawn Entertainment than Epic Games is because Respawn comes up with original ideas, while Epic Games steals ideas, like in Fortnite, for instance, they basically stole the respawning idea and the vault idea. The respawning idea Apex came up with was that you have 100 seconds to pick up your teammate’s banner (if they die), and then if you pick it up, you can respawn your teammate at a respawn beacon. If you don’t pick it up in 100 seconds, your teammate can’t play again until you play another game.

Epic stole all of those ideas, but it’s a reboot card instead of a banner, and instead of a respawn beacon, it’s a reboot van, and instead of it taking 5 seconds to respawn a teammate, it takes 10 seconds. And the vault. In Apex Legends, you have to find a vault key, and find a vault, and then open the vault to get high-tier loot. In Fortnite, you have to go to certain areas, and then kill a certain AI, and then find and open the vault. What I think Epic is trying to do is that since Apex Legends is the third most popular video game worldwide, they are stealing ideas from Apex (or Respawn) in order to grow more downloads and become more popular.

I think Respawn Entertainment is a better option than Epic Games because if you worked at Respawn, the employees and staff treats you and everyone equal, unlike Epic Games. Respawn’s games are WAY funner than the games on Epic Games’ site, and Respawn comes up with good, original ideas while Epic steals them from Respawn because of the popularity difference. 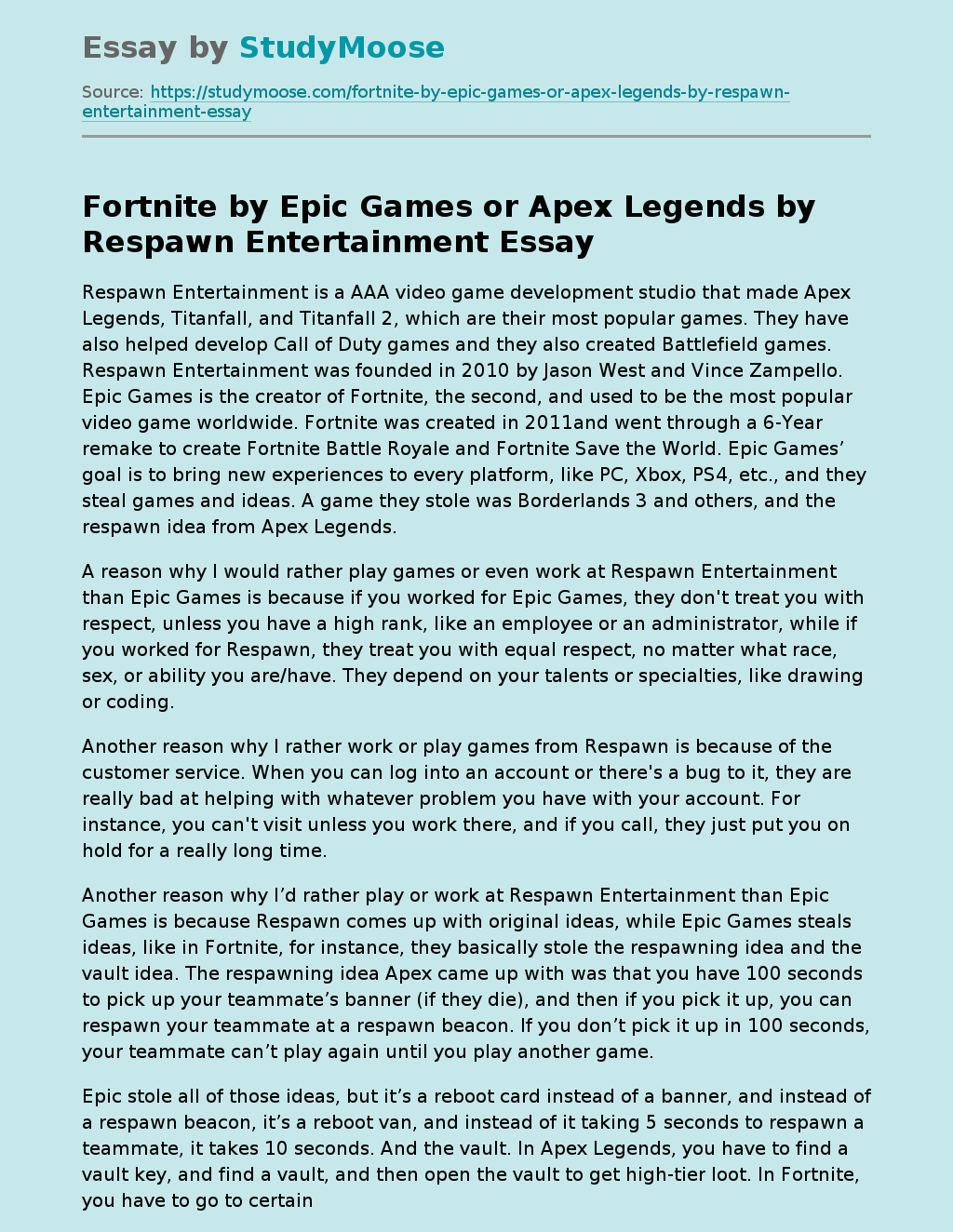