How does Forster express the Bloomsbury Group values in Howards End?

Forster represents ‘the pleasures of human intercourse and the engagement on beautiful objects’ firstly in the epigraph to Howards End, ‘Only Connect. ‘ This presents the interactions between humans emotionally and physically. This concept is shown through the connection between Mrs Wilcox and Margaret Schlegel. The connection is seen when Mrs Wilcox invites Margaret to ‘Come down’ to Howards End with her, which Margaret replied ‘might I come some other day? ‘ Margaret’s reply seemed to annoy Mrs Wilcox.

She is spiritually attached to her home and felt Margaret would understand the connection between the beautiful house and herself.

Don't use plagiarized sources. Get your custom essay on
“ How does Forster express the Bloomsbury Group values in Howards End? ”
Get custom paper
NEW! smart matching with writer

However Margaret had thought on the conversation and eventually realised the connection. “Another day” will do for brick and mortar, but not for the Holy of Holies into which Howards End had been transfigured. (Chapter 10) The connection between the Mrs Wilcox and Margaret here begins, as they both seem to mutually understand each other and concludes in the final chapter with Margaret assuming Mrs Wilcox’s attitudes and ownership of Howards End.

Forster continues presenting the values of the Bloomsbury group throughout the novel and the value of connection can be seen through the friendship of Margaret and Mrs Wilcox in Chapter 9 Chapter 9 also conveys the literature art and philosophy values. The Luncheon Party that Margaret ‘gave in Mrs. Wilcox’s honour was not a success. ‘ Margaret had failed to recognise the different aspects of Mrs Wilcox’s character. Mrs Wilcox was ‘not interested in the New English Art Club, nor in the dividing-line between Journalism and Literature.

I believe Margaret assumed Mrs Wilcox to be cultural and involved in literature and respect ‘beautiful objects’ like her and ‘one or two delightful people’ did as Mrs Wilcox was wealthy like Margaret and her friends. At the time the novel was written poverty prevented people from affording to learn the arts and literature. Therefore Margaret assumes Mrs Wilcox will be interested as the wealthier the person the better education they would have received.

Throughout the speech in this chapter it becomes clear that Forster is trying to convey how everyone is different and not everyone can feel comfortable in certain social gatherings and like the members of the Bloomsbury group they could not always feel they belonged as each member was intellectual yet rebelled against the systems and traditions at the time. Also the luncheon party that Forster talks about describes the Bloomsbury Group as they met up every Thursday evening to discuss Art, literature and Philosophy. Each member felt free as there were no adults correcting their behaviour.

Each member of the Bloomsbury Group had had a better education, many of which were Cambridge Graduates which would involve them being educated in art and literature. Although today, the behaviour of the members in the Bloomsbury Group obviously would be more acceptable as the 21st century has more freedom of speech. Margaret uses culture for her conversations which is where Mrs Wilcox and Margaret first could not connect.

The conclusion must be drawn that Forster portrays culture through the interests of the Schlegels; Literature and music. Each member of the Schlegal family views culture differently, i. . Tibby treats music literally, ‘music as music’ but alternatively Helen interprets music with goblins and creatures that come to life. Each individual has got their own interpretation of music and this is how Forster perceives society. Society has their view and the Bloomsbury Group has different views. Some might say that there is a lack of understanding culture. I believe that there may have been some lack of understanding between the Bloomsbury Group and society because the values and beliefs of the Bloomsbury group were different and a new way of thinking which society had not yet accepted.

In my opinion I believed that individuals were meant to be unique otherwise we would all be identical. I feel Forster was trying to express that individuality was acceptable and that people should not be judged for this. Another value of the Bloomsbury Group is the fact that their sexuality, be it homosexual or bisexual caused controversy in society as it was felt that the Bloomsbury Group were outrageous. The Bloomsbury Group were perceived in this manner as there were many love affairs. They were simply criticised and judged for having a relaxed attitudes towards personal relationships.

Throughout Howards End there is no apparent connection to the Bloomsbury group and their sexuality but I can find reference where the characters that represent culture and society look down on other characters in the book. For example, when Helen Schlegal wants to find sanctuary at Howards End as she is pregnant with Mr Bast’s child but not married and Henry refuses any refuge here. Henry Wilcox is mortified by how Helen’s behaviour has disgraced the Wilcox name. Henry Wilcox cannot ignore what Helen has done because society cannot.

To be pregnant and not married is sinful and can bring shame across the whole family which will ruin Henry Wilcox’s reputation. Henry and Margaret argue about this matter and he tells her that he will not ‘give you and your sister leave to sleep at Howards End. ‘ This reflects the Bloomsbury Group because it was a form of sanctuary from judgemental society. The Bloomsbury Group were judged by society for being homosexual/bisexual and the Group actually provided a form of sanctuary because they all had the same values and beliefs towards “the pleasures of human intercourse and the engagement of beautiful objects”

Forster indicates that Mr Wilcox is a hypocrite. Margaret makes that quite clear in chapter 38 that Henry had a ‘mistress’ and Margaret forgave him and Helen ‘has a lover,’ therefore it’s hard to see why he cannot forgive Helen. All men have is their pride and as soon as society could see any faults in the actions that they take then this pride is destroyed and Mr Wilcox is trying to protect his pride.. This reminds me of the Antony in ‘Antony and Cleopatra’ as Antony loses a battle against Caesar and no one in Rome remembers any of the battles he has won, in their eyes Antony is a failure.

If the public know of the faults in the characters flaws then they will feel they have failed. Society would disapprove of Mr Wilcox’s affair as well as Helen’s illegitimate child. Helen like Virginia Woolf and Vanessa Bell, members of the Bloomsbury Group are free spirited. Helen is an independent woman and at the time of the novel being written woman were supposed to just support men, they should not speak out of turn. Virginia Woolf and Vanessa Bell are both strong independent woman which is another reason why the Bloomsbury Group were judged because of their position was higher than it should have been.

E. M Forster was a member of the Bloomsbury group and was thought to be homosexual. Therefore I feel Forster is writing from the experience his friends and he felt for being discriminated against for experimenting and seeing things differently. Through these values presented in the novel through social gatherings, marriage and personal relationships it becomes clear to the reader just how Forster and other members may have been treated and how cruel and unfair society was.

How does Forster express the Bloomsbury Group values in Howards End?. (2020, Jun 02). Retrieved from https://studymoose.com/forster-express-bloomsbury-group-values-howards-end-new-essay 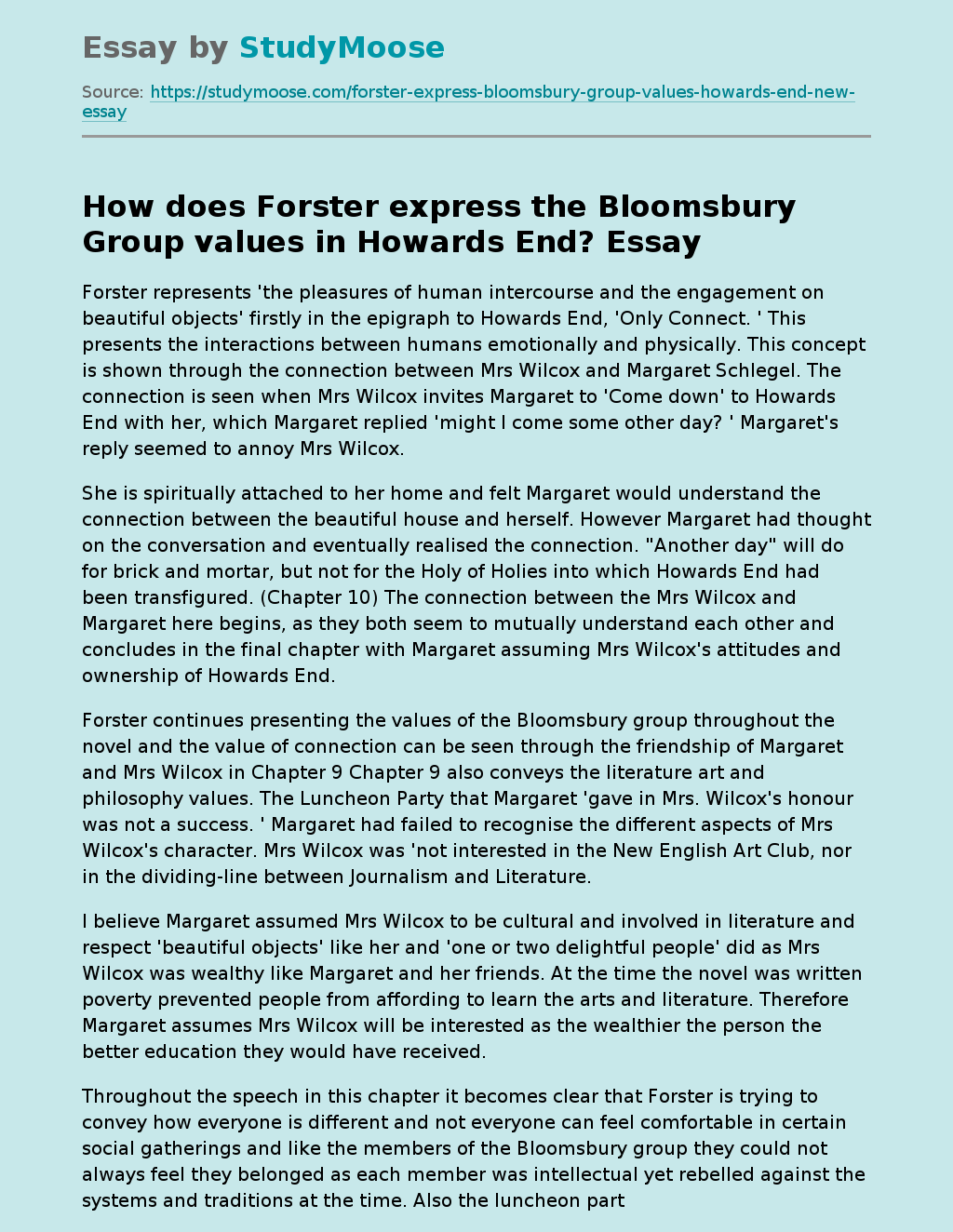