Forrest Gump, a movie that not only informs the audience and the people who interact with Forrest, about the life of a very simple man (Forrest Gump, played by Tom Hanks). It also teaches morals and the way life is perceived in the beautiful mind of a simple man. Forrest Gump, throughout the movie narrates the story whilst he is sitting at a bus stop telling the people who sit next to him about his past experiences in his life (the storyline and set up of the movie).

Most of the people waiting for their bus aren’t convinced and don’t believe Forrest and his stories, how he met Jenny Curran, his first ever real friend who ends up marrying him, how he met Bubba (played by Mykelti Williamson) and became the richest shrimp operator in America with Lt. Dan Taylor, his Lieutenant in the Vietnam War and how he was the Pin Pong champion for the army.

The movie and stories told by Forrest all interact with events which actually occurred and impacted on the American society.

A technique that is used to show emotions or reactions of characters which is used throughout Forrest Gump. Close Ups are used to give brief explanations of the way the character thinks, feels, etc. It makes the audience feel the emotions created by the character at the time/place. It also gives them a perspective of the characters character/personality. This technique is used when Forrest is a young boy and he is getting his leg braces on. There is a Close Up of his face showing the pain he is being put through in order for him to have a straight back when he is older. This Close Up makes the audience see and feel the pain Forrest is going through, it also shows that he is not a very physical/strong boy because he is not coping with the pain.

A technique that is greatly used to create mood or atmosphere which can have a huge impact on the audiences view of the film. This technique is used greatly in Forrest Gump in order to set the time and place of specific scenes. It is used in the opening scenes when there is a feather which is floating through the sky and around the city. There is music played while this is occurring, the music is soft, calm, basic and emotional which gives the audience the feel and setting of the movie.

A technique which is used to involve the audience in the action of the movie so it gives them the feeling that they are involved in the specific scene. This technique is used throughout the movie especially when Forrest is a young boy and he begins to get chased by the class bullies. There is tracking used when the boys start to chase Forrest and Jenny tells Forrest to run and the camera follows him making it seem you are running with him. It shows the speed of Forrest as he is beating the boys who are on push bikes ands later on in the movie the scene is repeated but they are all older and they are chasing Forrest in a car and he still managers to get away.

Bubba Forrest’s best friend, one of which is of the same intelligence as Forrest, both being simple minded people. They met in the army where their friendship formed. A man of his word, true to his family beliefs, growing up to one day own a shrimp boating business. Bubba is a man who has a goal and will do anything to succeed in what he hopes to achieve in, which contributes to the meaning of the film that as long as you stick to your goals you can achieve highly.

Mrs GumpA woman who has a strong up bring amongst Forrest, she is very strong on her beliefs and will do anything for her son, which is shown in the movie. A woman of high intelligence, kind heart and willing to help people in need which is also shown throughout the movie.

Lt. DanA man from a background of war torn history, which for him is a major thing to live up for. Being very angry with Forrest, who saves his life. Forrest is treated in a unique way, both being through hell and back together, which has built their friendship. Lt Dan is a very wise man and also strong on his beliefs and stands by his word, which is shown when he tells Forrest that he will join him on his shrimp boat.

Forrest Gump can be portrayed in many different styles of films but it is mainly showing the beautiful mind of a simple man who is taken advantage of in many aspects of his life due to his simplicity and generosity, during the adventures and achievements he achieves throughout his life. In the movie he is portrayed a simple man who achieves in ways the normal man would not achieve which gives the message that anything is possible as long as you have a dream and continue to work at it. Another message is if you help people hopefully the favour will be returned as long as you stay a good, honest person. The director of the film Robert Zemeckis achieves these messages created by posting that feeling of isolation of society which Forrest receives but still managers to be a successful person. 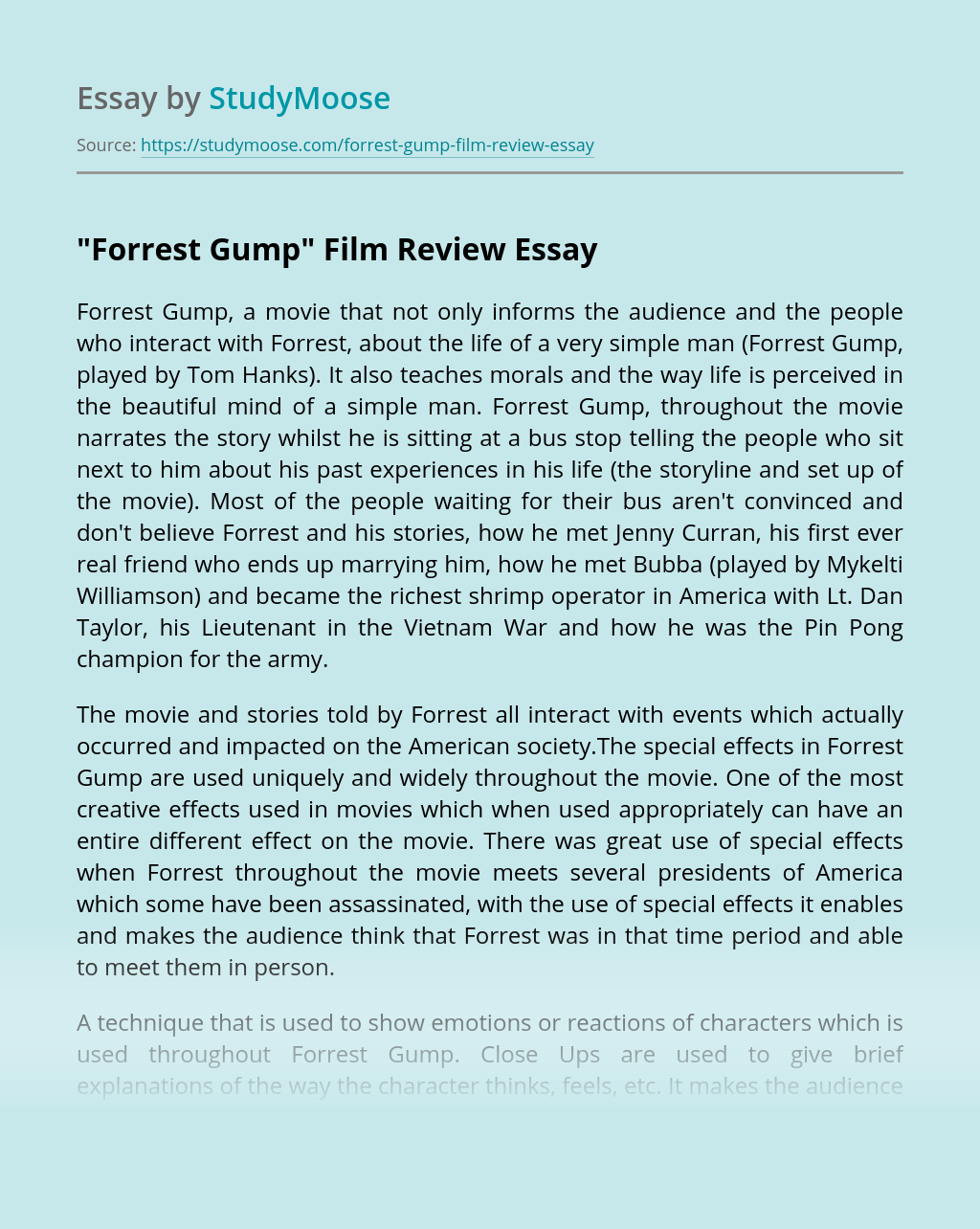